Lost Ark was a game that may as well have been vaporware for so many years. It plays basically like a Diablo game, although as someone who didn’t play a lot of Diablo, I’d say it feels more like a Dungeon Siege game. (Don’t throw me to the wolves; I’m just being cheeky with you Diablo fans.) All that aside, Lost Ark finally did make its way stateside last month, and it arrived with a bang!

We’ve already covered the game as a whole from a few different perspectives. MOP’s Tyler provided some excellent pre-release coverage as well as his thoughts after spending more time in game. Not only has Tyler been playing a lot, but the game has also got its hooks sunk deeply in MOP’s Chris too. As for myself, well, I can totally see where these two are finding the fun and excitement in the game. It’s a smooth and well-developed game that knows what it is doing and who it is. The action sequences are also pretty impactful despite too.

However, Fight or Kite is our PvP MMO column, so you know I just have to have some PvP available to feel fully engaged in a game. So let me take you down a different path and let’s talk about what Lost Ark has to offer for the PvPers out there.

Look elsewhere if you primarily want a PvP experience

It might seem obvious that Lost Ark is a typical PvE MMO before it is a PvP one – and that’s OK! In fact, I actually prefer it, or at least I think I do. I’ve been wrestling with the idea that maybe there isn’t a good place for pure PvP-only MMOs anymore. Instead, I rather prefer games that try to be something of an everything box. I like that I can choose to faceroll through mobs of monsters while clicking away through a story, and then choose to get more serious and queue up for some heated PvP battles, all within the same world.

The issue with PvP in Lost Ark is that it appears to be too much of a side gig. Looking back at some of my favorite games, I’m actually able to play those as a full game in either mode. With Guild Wars 2, you can legitimately create a character, go over to WvW, and spend all your time there. I’m not sure why you would anymore, but you could. Same with arena content. Warhammer Online actually did a really good job of encouraging PvP through its RvR system while also letting you skirt the PvP in many ways. There are lots of great examples in the MMORPG genre.

Yet in Lost Ark, the PvP is really just a side piece that can be a fun experience if you are already a fan of the game – but you wouldn’t play it just for the PvP.

The primary reason for this is that you have to play and level up quite a bit before the arenas even become accessible. It took me about 11 hours of playtime before I unlocked the arenas. In the grand scheme of MMO game time, those are rookie numbers. When I looked at my total playtime, it was only 11 hours, but honestly, I felt like I’d been playing for ages.

I didn’t realize I would need to play through so much of the story content before arriving at the PvP area. So while I wasn’t completely playing and reading all the content, I was leisurely picking up all the quests and completing them. I mean, it’s so easy to grab three or four and complete them all together that it hardly adds any extra time. Still, as someone who plays these types of MMOs maybe one to two hours a night a few times a week, I found it took me basically three weeks to unlock the content. Again, I wasn’t trying to speed my way to the PvP, but I didn’t realize it would be much beyond the first zone either.

You might think it’s kind of a ridiculous point to make that 11 hours of gameplay is too long to wait to PvP but let me put it another way: That 11 hours of playtime is basically just a tutorial. Right around that mark is also when you unlock gathering and the crafting equivalent skills. So I can understand the lore reasons and that the developers want you to understand and get a feel for the game before throwing you into PvP, but that’s a long time to get comfortable. If you get annoyed with the 20 minutes of hand-holding most games give you. then you’ll understand how this felt like an eternity for me.

Accessibility is high once the game eventually directs you to arenas

Despite all that, eventually you will get to the PvP arenas, called the Proving Grounds. Fortunately, the way Smilegate designed the arenas was very smart. We actually have a fully leveled and balanced playing field, so time and gear in-game aren’t going to help you here. Instead, it is actually similar to what you’ll get from the original Guild Wars or Guild Wars 2.

By interacting with the PvP menu – I’m sorry, the “Book of Coordination” – you’ll be able to assign attribute points and even choose from all the skills your class has access to. That’s right, even ones you haven’t unlocked through leveling yet! A further advantage is the ability to view and equip from a recommended list of skills for your class. This is how you do an arena PvP mode. 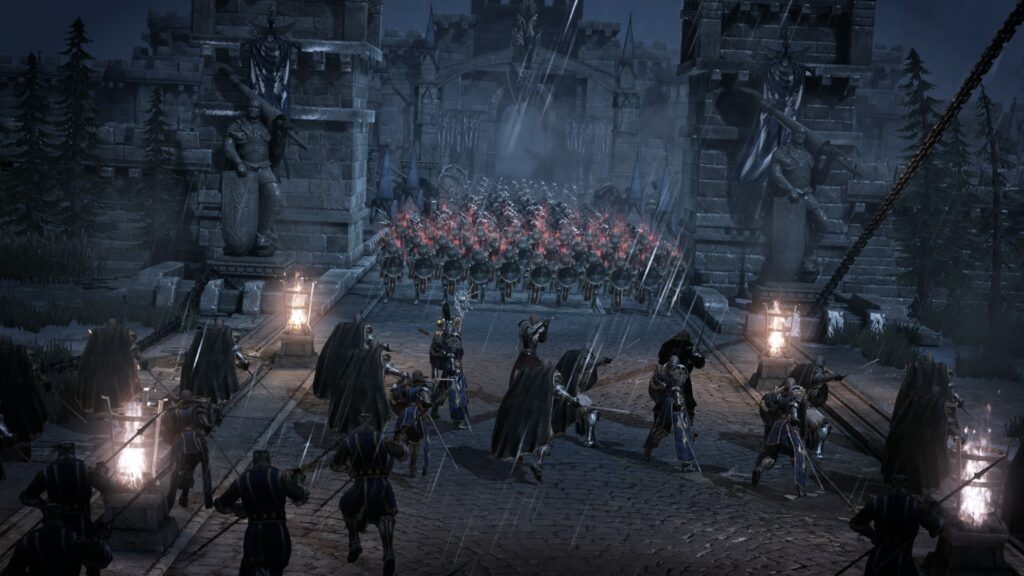 In addition, you can go to the Training Grounds to try out the various skills and get a better feel to what makes a good build. You can also define several builds and quickly swap between them. Totally free-to-play players will have access to only two builds at a time, but you could purchase more.

Lost Ark included a few different PvP modes to satisfy my thirst. Unfortunately, they are basically one-note, but at least that one note isn’t a conquest mode. If you want to play as a party, the teams in Lost Ark are made up of three players. Luckily for those hermits out there like me, there are also modes that focus on the solo player.

You have two Deathmatch modes. One is for teams and the other is more of a free-for-all. The free-for-all also has six players fighting in a single arena, but you are scoring individually, and the player with the most kills wins. The somewhat more interesting mode is a Team Elimination mode where two teams of three compete in several rounds of 1v1 duels and the team with the last person standing wins. It’s sort of like a single elimination tournament bracket. Before the match, each team gets to set its order to fight, and the winner gets to stay and fight the next player from the other team. The team still standing at the end is the winner.

Overall, I like what Lost Ark has done with the Proving Grounds PvP mode. I wish I could’ve jumped in to play it a lot sooner, but now that I’m here, it isn’t so bad. Personally, however, I just don’t love the click-to-move sort of combat that comes with most of the isometric games. It just adds a layer of disconnect for me since I don’t have a big history with these games. There is the option of using a controller as there’s full controller support; with that, you move where you point the joypad so it feels a bit smoother to me. It’s something that I might consider playing with more if I were to come back to Lost Ark.

So, if you are a Lost Ark fan and enjoy PvP, I think this is really a good setup. Let me know your thoughts and if you thought the tutorial was too long! For me, I think the game isn’t going to stick, but at least I got this far, so if I want to jump back in I’ll be ready for it!