In the rushes of excitement over Lost Ark and End of Dragons, New World seems to have fallen off the radar a bit. As a result, there has been very little discussion around the game’s recent updates and planned roadmap, and that’s a shame because there’s some genuine cause for hope here. It’s not everything I’d hope for, but it does seem like the developers are beginning to move the game in the right direction.

Most importantly, February’s patch and the upcoming Heart of Madness update contain a bevy of quality-of-life updates that the game badly needed.

Firstly, the travel and storage troubles I wrote about a few months ago are now almost completely solved. Azoth costs for fast travel have been nerfed so heavily that they are now practically non-existent. Meanwhile, inn recall has had its cooldown halved, allowing for more free teleports.

Heart of Madness is also bringing storage updates that should reduce the need for running around. It will remove both the fee for transferring goods between different towns’ storage and the requirement your faction control both towns before you can make a transfer. 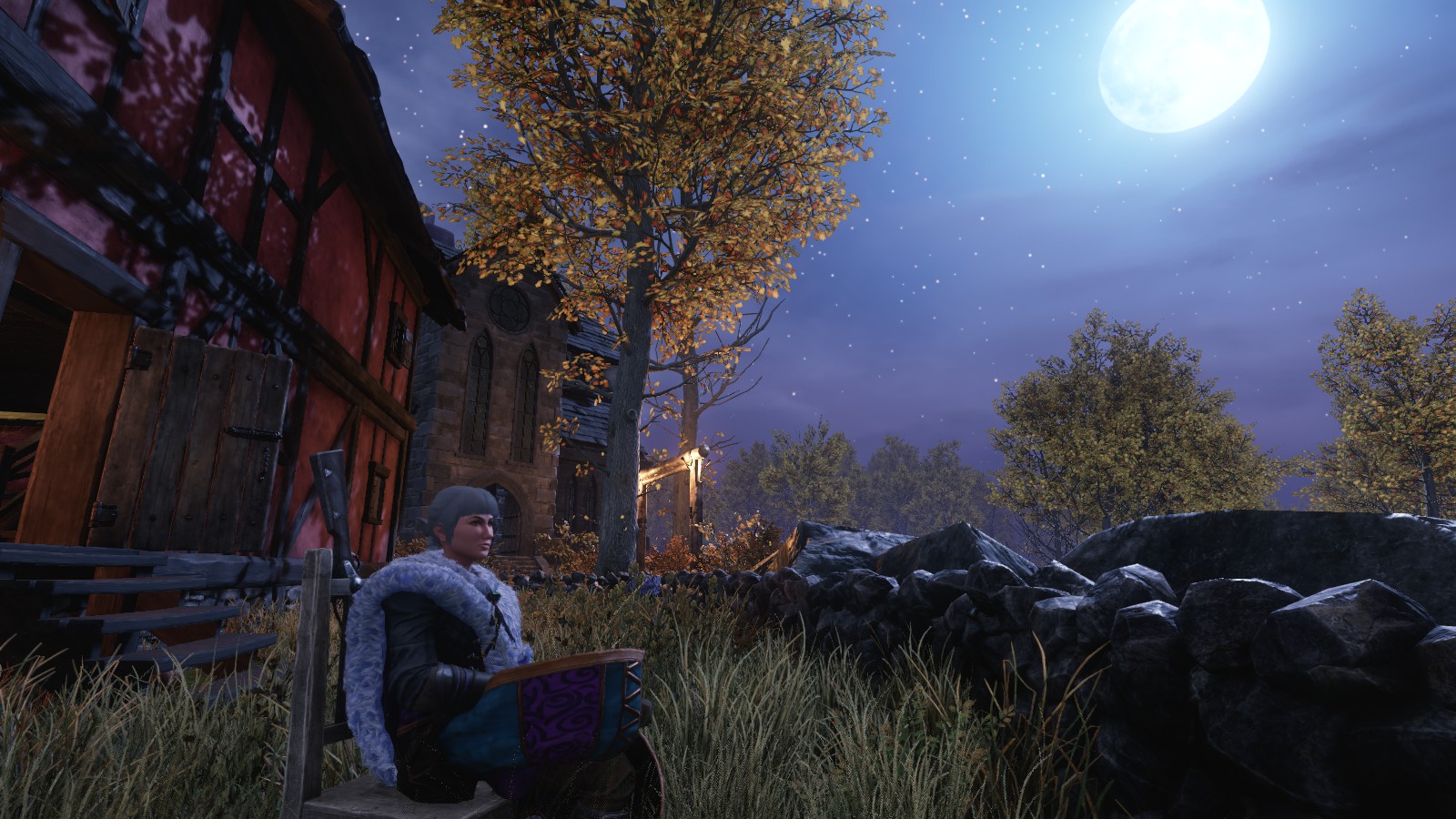 Meanwhile, another issue I’ve written about — the extortionately high housing taxes — has also been largely resolved. Property taxes have received the same drastic reduction as fast travel costs. My weekly taxes have gone from 800 gold to about 150, which feels manageable even for my casual playstyle. Keep in mind also that I do have one of the most expensive houses in the game, so for those willing to settle for a smaller spaces, the prices should be downright trivial.

This also further helps with the travel issues in a roundabout way. Having a bunch of houses just for the sake of more fast travel points is now a much more practical plan.

Another issue that I’ve been complaining about as far back as alpha is the inconvenience of needing ammo for (non-magical) ranged weapons. That’s not being solved entirely, but Heart of Madness is taking steps to make the situation less painful, at least.

When the new patch arrives, ammo will become a perk rather than a necessity, similar to buff food. Guns and bows will still be able to fire without ammo; ammo will serve only to provide a small damage boost.

The biggest beneficiaries here are new low-level players. The first few hours as a ranged weapon user have always been painful in New World, with the risk of running out of ammo constantly looming over your head. Now you’ll be able to jump straight to using a gun or bow as your main weapon.

Casual players doing easier content should also no longer have to worry much about ammunition. The damage boost isn’t going to be enough to matter in stuff like standard open-world quests. 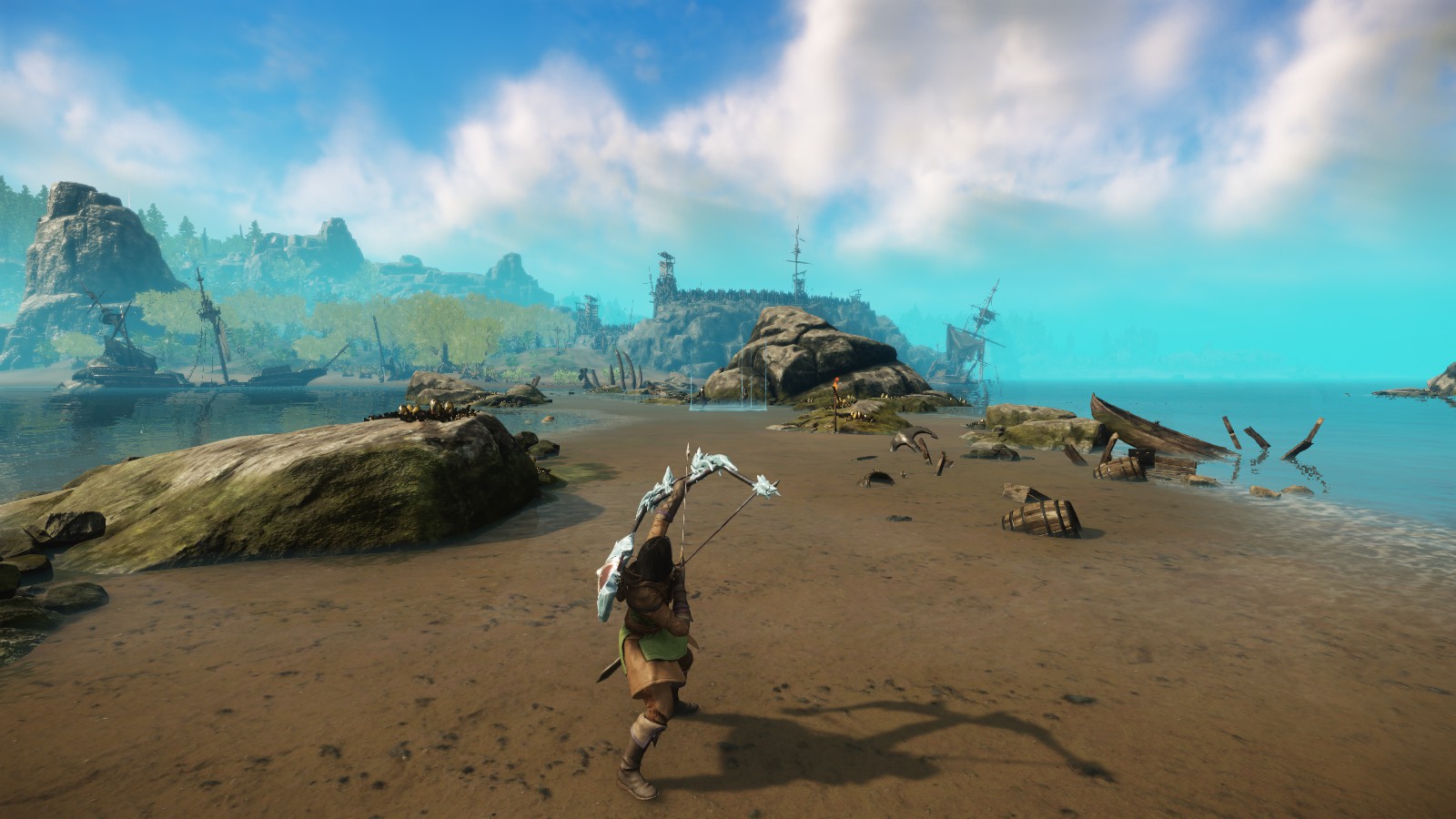 People who want to maximize their performance are still going to want ammo, but even for those people ammo will be a bit less of a headache. Ammo will no longer have weight and now stack up to 1,000, making for much less inventory management struggles. To be honest, I would have preferred ammo be removed entirely, but this is still a big improvement.

Combat has also seen some revisions. A new queue system has made weapon swapping, dodging, and blocking noticeably more responsive. I would still like to see further improvements; I think all those things could still be more responsive still, and I would still like to see stagger from NPCs reduced and/or players able to stagger NPCs once again. But this is a step in the right direction.

Meanwhile, crafting… still kind of sucks. The XP required to level most skills has been reduced by 10%, but I don’t think that’s nearly enough. I do hold out some hope that this may still be changed in future, given how drastic some of the changes to other systems have been, but for now trying to be a crafter is still a pretty miserable experience, and that’s a real shame, given how robust New World‘s crafting can be (and how much time I already sunk into it…).

Finally, we now also have a roadmap of New World‘s plans for most of the rest of 2022. This could be seen as a further good sign, although truthfully I have mixed feelings on roadmaps in general and this one in particular. 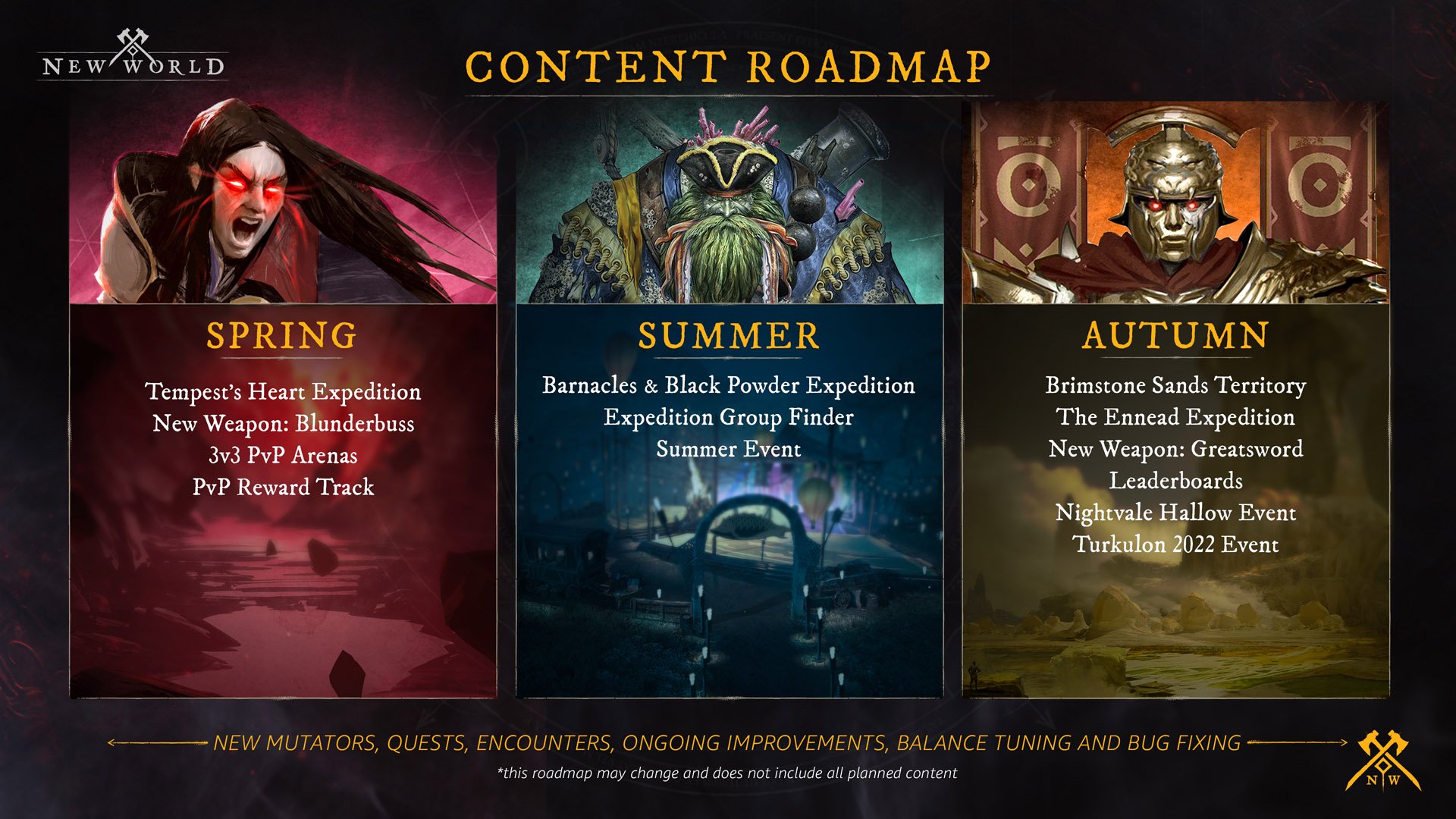 It’s good to know that the developers have a plan, and I think players should have at least a general idea of what to expect in the near future, but roadmaps have a history of over-promising and under-delivering, and the blowback if dates are missed can be intense.

Therefore I’m torn between being concerned and reassured by the fact that New World‘s roadmap is relatively unambitious. The fact Amazon is not over-promising gives me a good degree of confidence that it will deliver what’s promised on time, but I must admit I was expecting a lot more coming down the pipe. 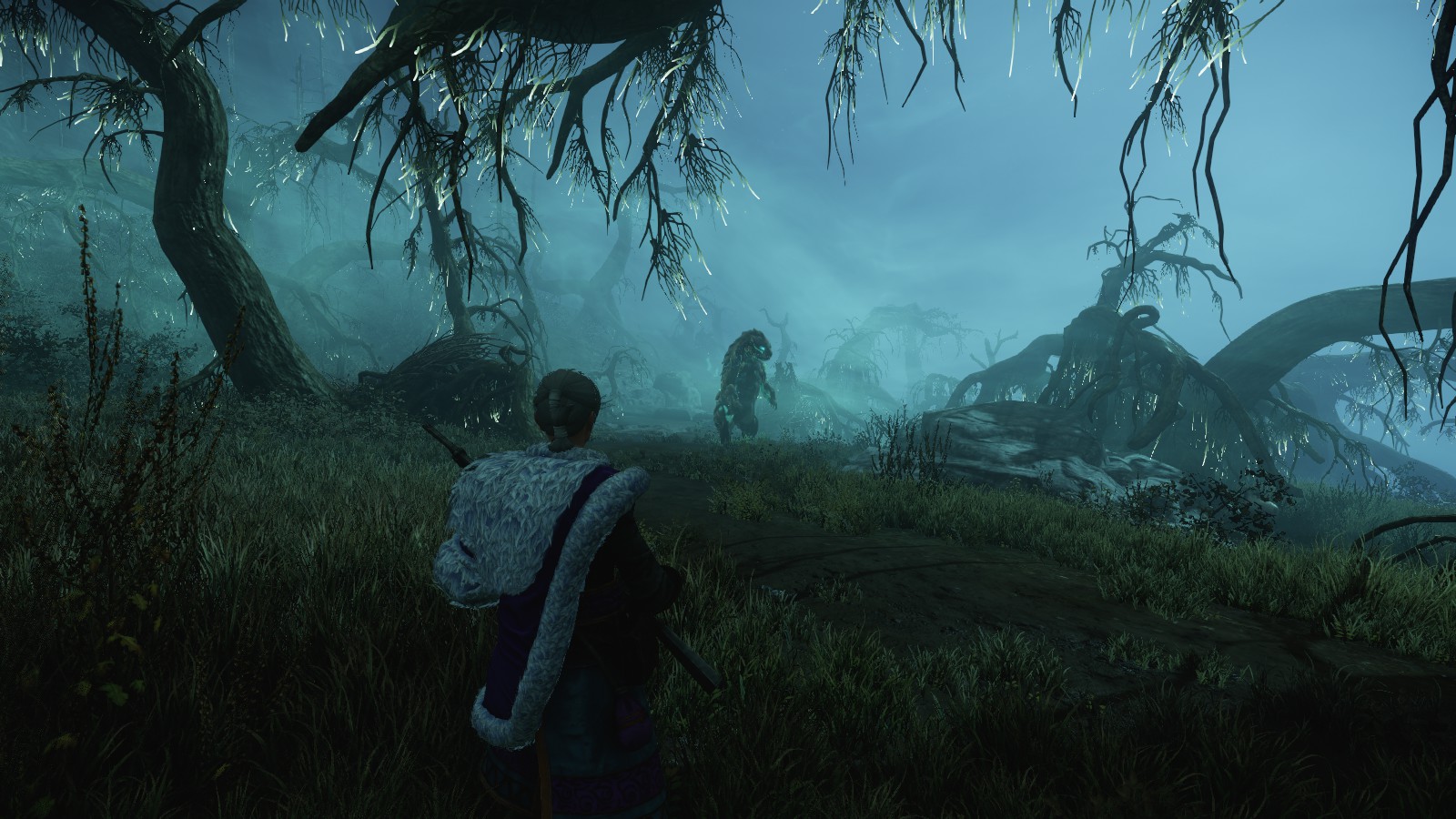 There are more dungeons, two more weapons (including the blunderbuss coming with Heart of Madness), some holiday events, and a zone, which isn’t nothing by any stretch, but it doesn’t feel like a lot for most of a year’s worth of development from a company with the budget of Amazon. I certainly expected more new weapons — where’s our pistols?

The roadmap does have a caveat that new features may be added that are not currently listed, and I’m sure we’ll see more than what’s listed there, but I doubt Amazon’d leave out anything truly big, like mounts or another weapon.

I’m especially surprised that we won’t be seeing the new Brimstone Sands zone until the fall. Even before launch, information about it was being datamined. At the time, we all thought it would be included in the first major patch after launch. By the time we actually see it, about a year will have gone by. Perhaps it wasn’t as far along as we thought, or it was bumped back to deal with the many post-launch issues the game has suffered.

All that said, what’s in the roadmap does look good. A dungeon finder will be a massive improvement for the game, I’m very excited for the greatsword, and even if it’s late, Brimstone Sands does look promising.

While the resemblance is probably coincidental, I am tickled by the extent to which New World continues to follow in the footsteps of The Secret World. A zone with combined Roman and Egyptian themes and a twist of eldritch horror sound familiar to anyone? Who wants to bet on the odds of Deus Sol Invictus showing up?

New World still has a ways to go before we can roll out the mission accomplished banner and declare the game “fixed,” but the last few patches do restore some faith that the developers are listening, and that the game is moving in the right direction. These quality of life changes may not grab a lot of headlines, but they’re crucial to the long-term health of the game, and I’m glad Amazon is making the effort.