After all of the time I’ve spent in my return trip to Albion Online, I can comfortably say that it’s not the kind of sandbox game that I can get in to. However, that’s not because I feel like I’m being pushed out or made to feel unwelcome, necessarily; it’s more just a matter of not being a good fit in spite of its greater amount of PvE experiences.

And I feel that way even after entering the yellow zones.

Before I made my way into the area, I did as much preparation as I could both in-game and mentally. I kept my pack light, considered banking some silver just in case the silver drops were equivalent to what was in my coin pouch, and put myself in the mindset that I was going to be immediately pounded into paste. I ventured out of the city walls, standing in what I presumed to be the safe area just near the city gate and was met with a whole bunch of people.

I froze. Were this many people camping in the hopes of crushing someone before they can even step out of safety? I ran around in circles a few times to build up my mount’s faster running speed, then dashed out of the safe zone. 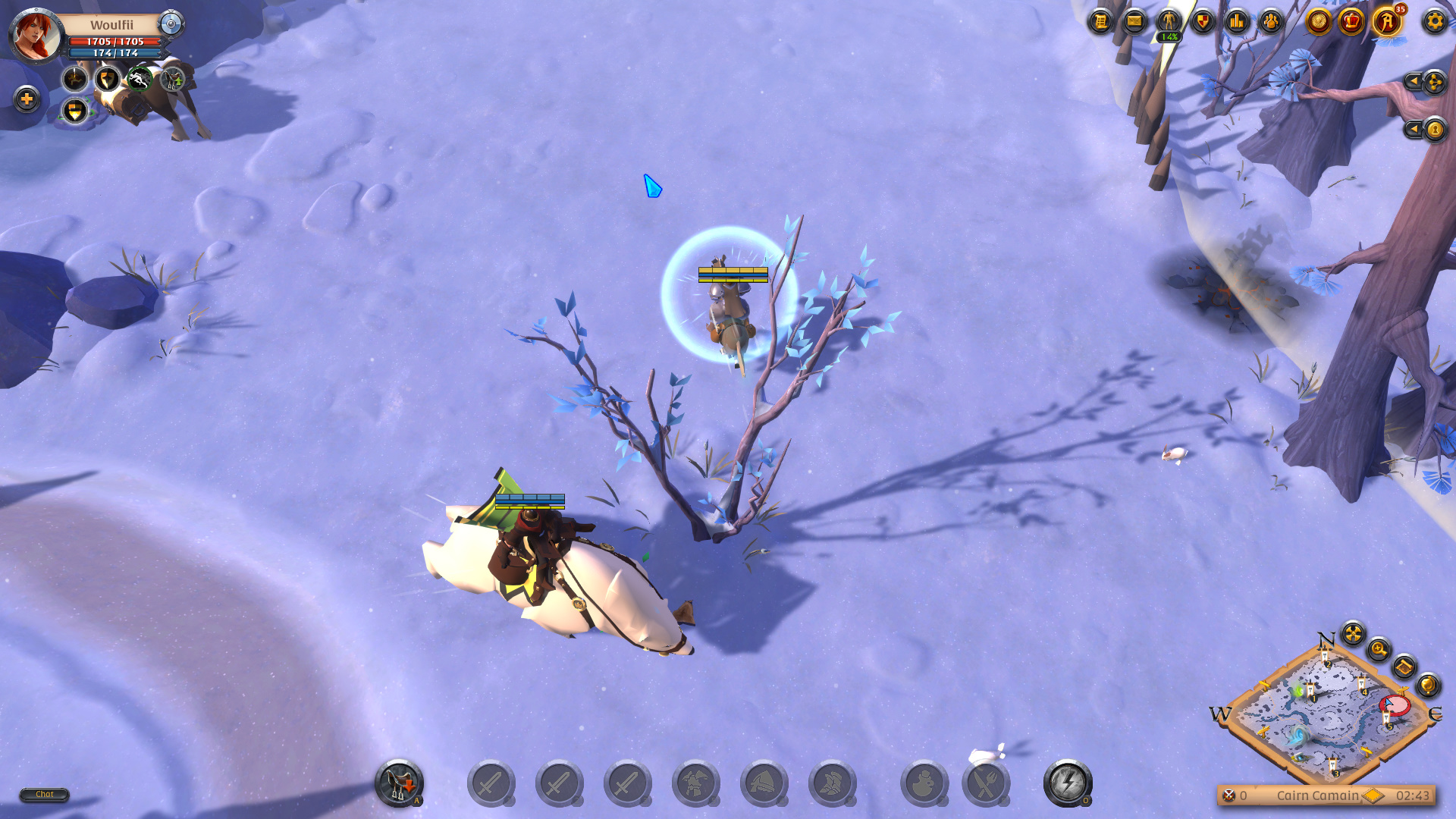 As a matter of fact, the wilderness of the area that I was entering was astonishingly busy but everyone was doing completely other activities. Most were gathering materials. Others were moving along the road to somewhere else entirely. A few people were fighting some monsters. At one point there was someone who looked to be entering an open dungeon area with high-level monsters. But there was an abject lack of FFA PvP going on.

I dared a little bit more closeness to someone as I chased down a tin ore node, keeping my eyes glued on them and the other people who were buzzing in the general area. Still nothing.

A little bit more and I started to ease my tension a bit, basically doing what I’ve been doing to this point – wandering the map, looking for dungeon doors or points of interest, gathering up materials as I went along. At one point when I was fighting a couple of ore golems, someone actually came up to me and helped. In a PvP zone. What the hell was going on? 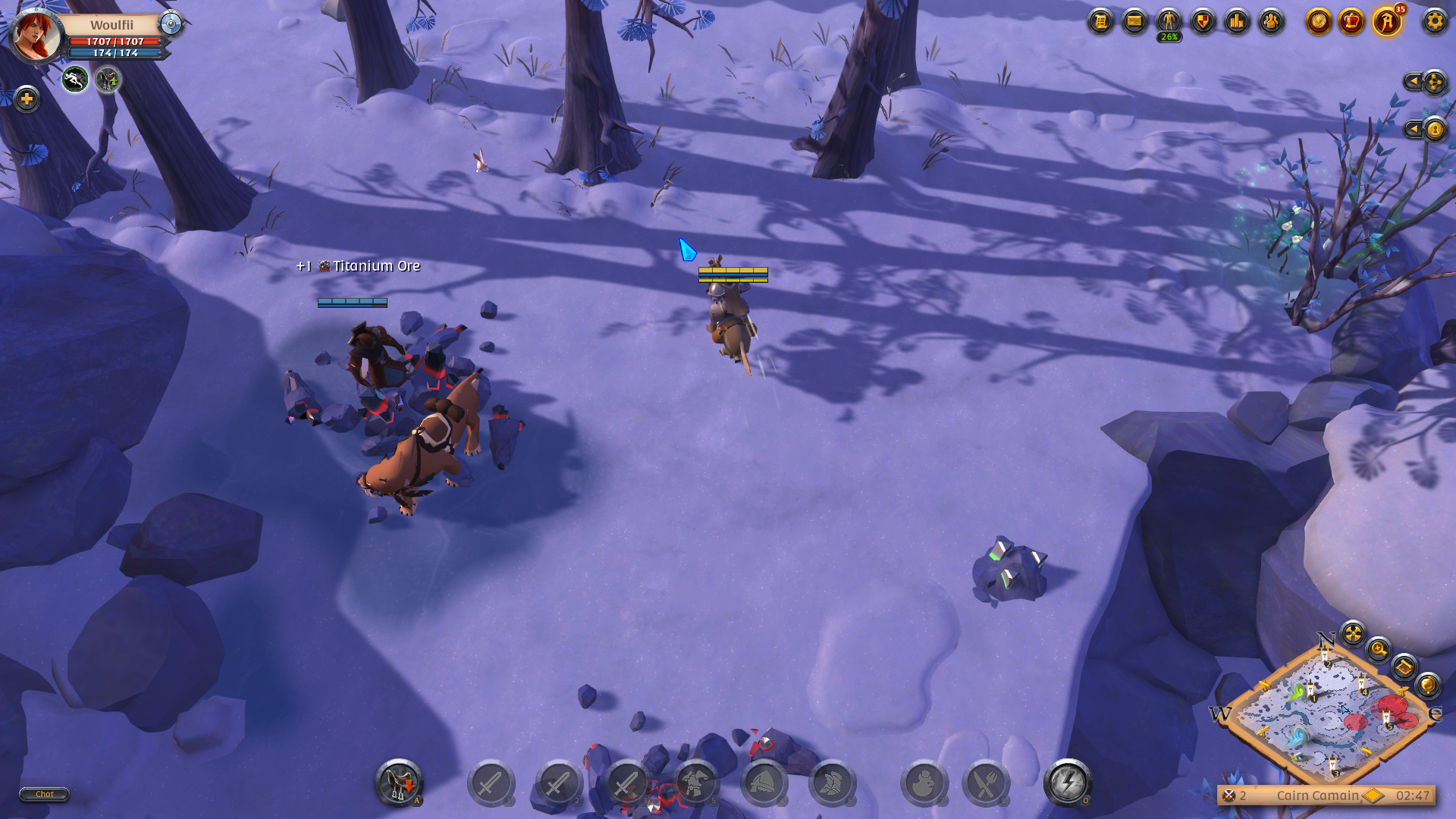 Turns out, there’s some kind of a flag system. Scanning my UI elements showed that there was a counter for how many players were listed as hostile, and then there was a button on the top left corner that indicated that I was not hostile. Essentially, in yellow zones, other players can attack you as an innocent, but it isn’t much more than a convenience and you lose nothing – and it flags the aggressor as hostile, meaning it’s open season on him for everyone else.

PvP flagging. In a modern sandbox MMORPG. Whoda thunk? (The red and black zones at higher levels are much more cutthroat!)

After a little while, it ended up being a good thing that I wasn’t flagged hostile because as I was wandering around, I noticed on the map that there were large red and white circles erupting in a certain area. Curious, I ran over to take a look and was greeted by an absolute melee.

When I ran into this flood of spell effects and sound, I was a bit confused. I tried to determine if there were monsters around or this was one of those invasions I had reported that happen in this game. I foolishly tried to use tab-targeting, running around in mad circles like a dizzy fly in order to make sure I wasn’t a target. 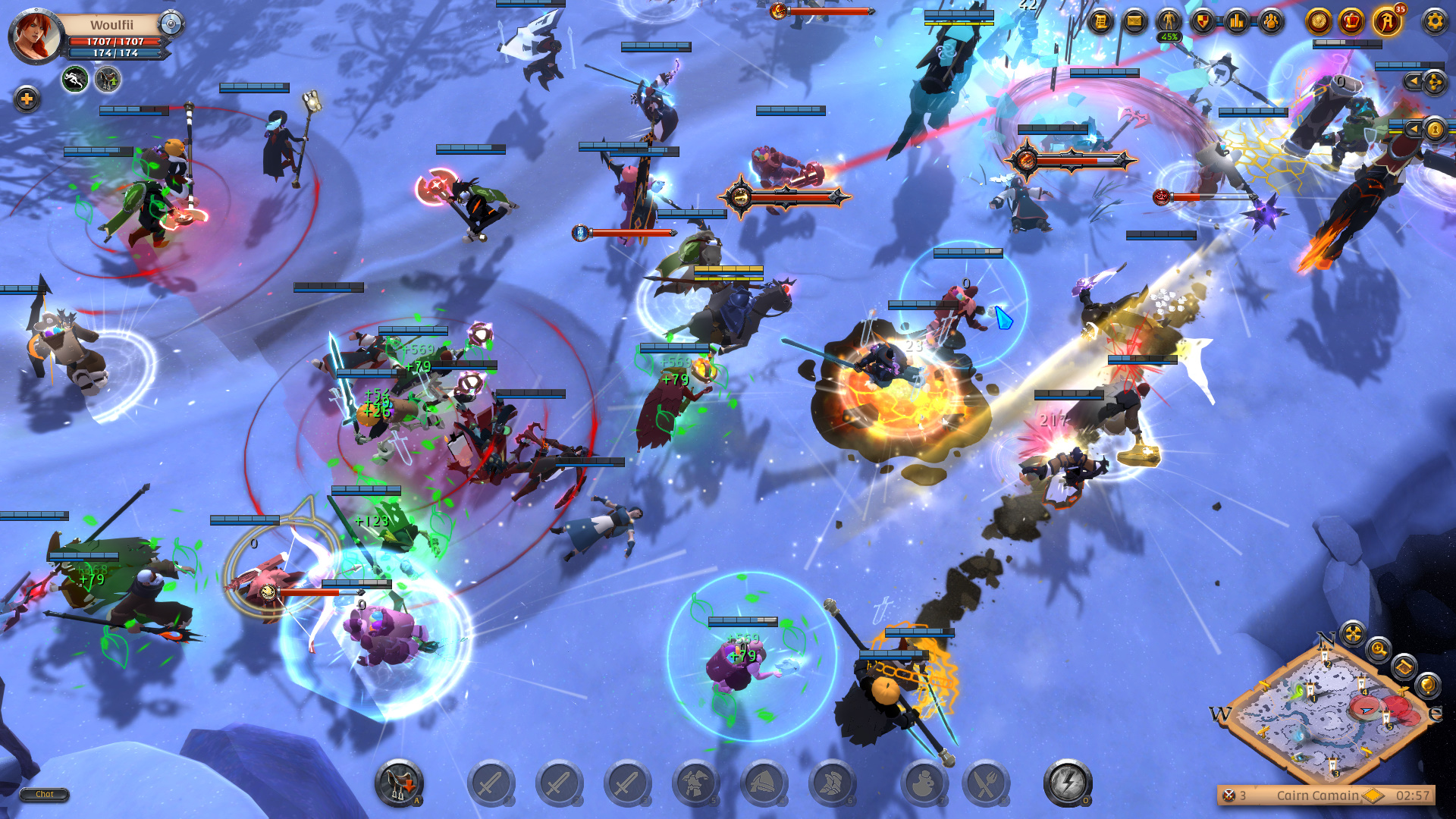 After a bit of observation and a little more calm, I started to notice that there was some color coding going on. Some players were wearing white capes, others red. Looking at the map, I started to notice that keeps were covered with crossed swords, and then with a replacement of the flag insignia that was on them. This wasn’t an event or an invasion; this was some RvR.

Now I think I understand why this area was so busy. People were eager to start capturing territory for their chosen faction.

For a little while, I followed along with the crowd, watching keeps get captured by the white cape faction one by one, playing silent war correspondent as battles unfolded. It was pretty one-sided for the most part, but absolutely madcap and interesting to watch, if a bit confusing. I would almost want to join in if I knew that I would contribute anything of worth.

And that’s kind of what made me realize that I can’t really contribute anything of worth to the playerbase of Albion Online. It all feels very established. 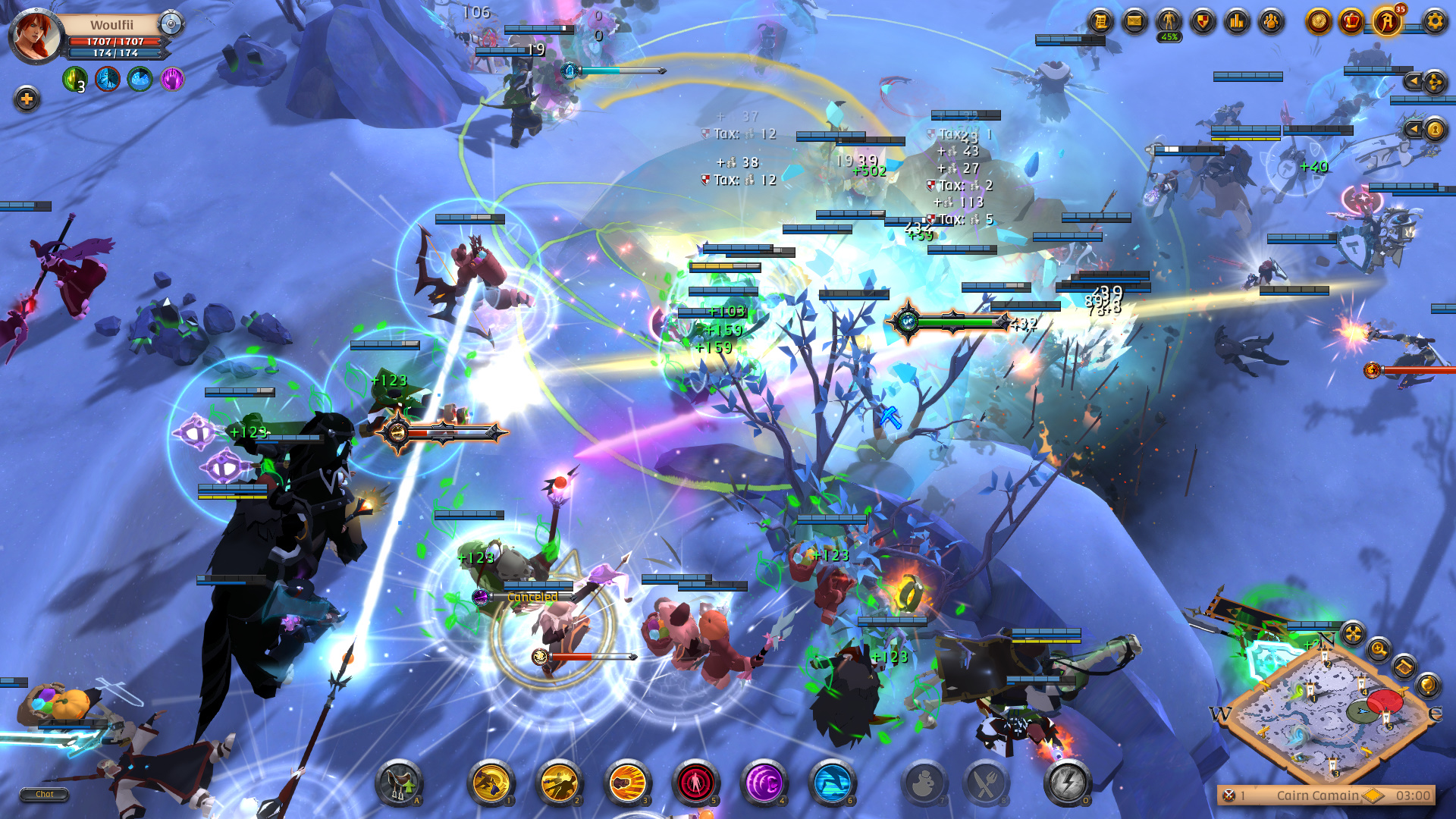 Now I do want to point out once again that I’m not being made to feel unwelcome. I didn’t really face any aggression from others, just a sort of indifference. I was a drop in a very busy, sloshy bucket, and people had their chosen tasks and assignments and goals that they were working toward, presumably together as part of their own groups or guilds. Perfectly cromulent if you’ve got friends or a guild, not so engaging for the solo newbie.

That’s just fine, honestly! I’m actually delighted that Albion is as busy and hectic as it is. Not only does this game feel like it’s hit its stride, it also has what appears to be an extremely active and sizeable playerbase. Nothing is better than knowing a game has carved out its niche, and while I do have to marvel at the surprising amount of PvE things that are on offer or possible in this game, I also still feel like I don’t quite fit in. I’m a loner in the crowd out here, and I think I’ll just leave the party in peace. Nobody will notice my departure, and I won’t feel bad about that fact. 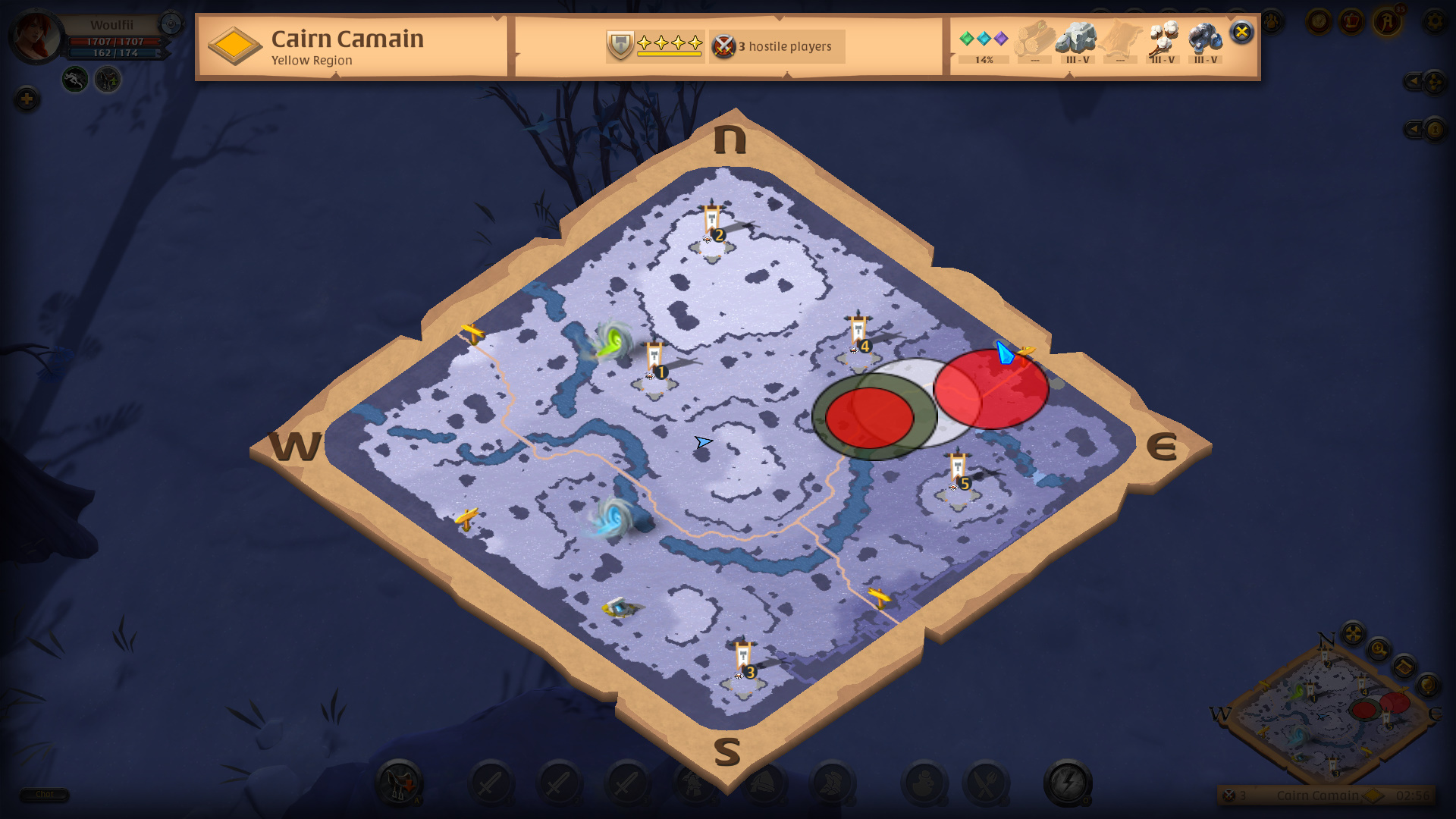 Overall, I’m glad I came back to Albion Online. Not only did doing so reaffirm that it’s not my kind of sandbox experience, but it also showed me that open PvP sandboxes don’t always have to be murderous hellholes. Granted, perhaps that perception would have been different if I moved to the red and black zones, but if I really did want to get into the PvP scene, this would be the sandbox I’d gravitate toward and try to grow inside of.

As that conclusion suggests, that’s a wrap on this month’s comeback to Albion. Which means it’s time for us to determine where we’re heading to for next month!

What game is next month's highlight? Choose My Adventure! 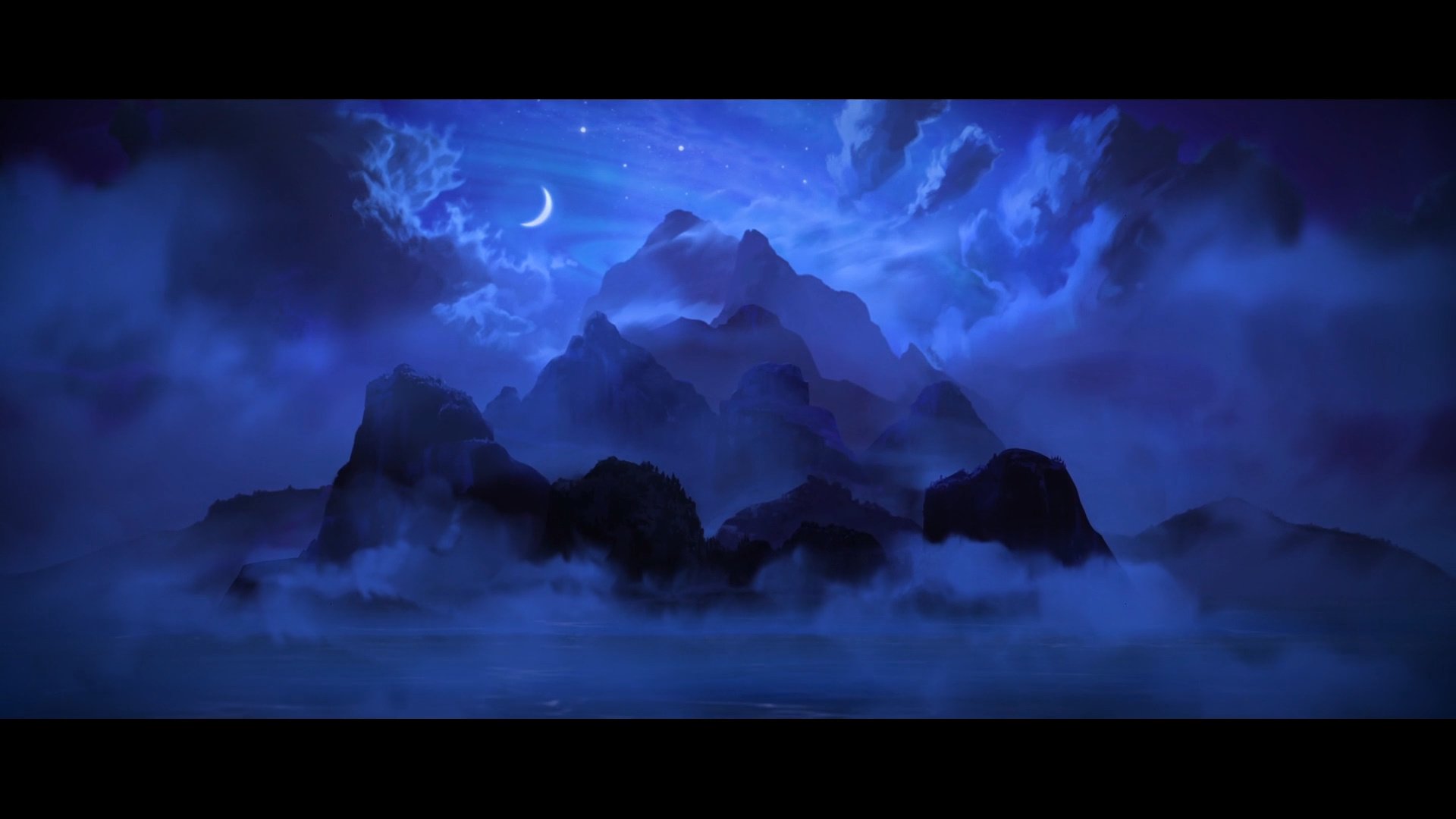 As ever, polling will close up at 1:00 p.m. EDT this coming Friday, April 29th. Until then, I wish those invested with Albion a lovely time. And thanks for the entertaining open world zerg madness.