Unpopular opinion time: I never liked Frank Herbert’s Dune novels. I do, however, acknowledge that the setting has a lot of cool ideas, and I did play an awful lot of Westwood Studios‘ Dune RTS games back in the day.

Based on that vague tingle of nostalgia, I accepted the offer a preview code for Funcom‘s new Dune: Spice Wars, which is launching into early access today.

I hadn’t followed this game super closely, but it was my understanding it combined elements of both RTS and 4X games. It was my hope that it leaned more toward the former; I love me some RTS action, but I never really got into 4X games.

Unfortunately for me, it turns out that Spice Wars is very much a 4X with only a light twist of RTS. The game plays out in real time, without players taking turns, and controlling combat units takes its basic cues from the RTS genre, but beyond that there’s no resemblance to anything like a true RTS.

It certainly doesn’t play anything like the old Westwood games. For me this is disappointing, but for some it might be a relief. Those games took a lot of liberties with the source material. Spice Wars feels like it’s trying to be a more faithful adaptation of the books, although there’s still definite changes being made. No shields, for instance.

The only option in the press build I accessed was solo games versus AI, and near as I can tell this will also be true of the early access launch. Multiplayer is planned as an addition in the near future, but it seems like a campaign might not be coming. Certainly not any time soon. 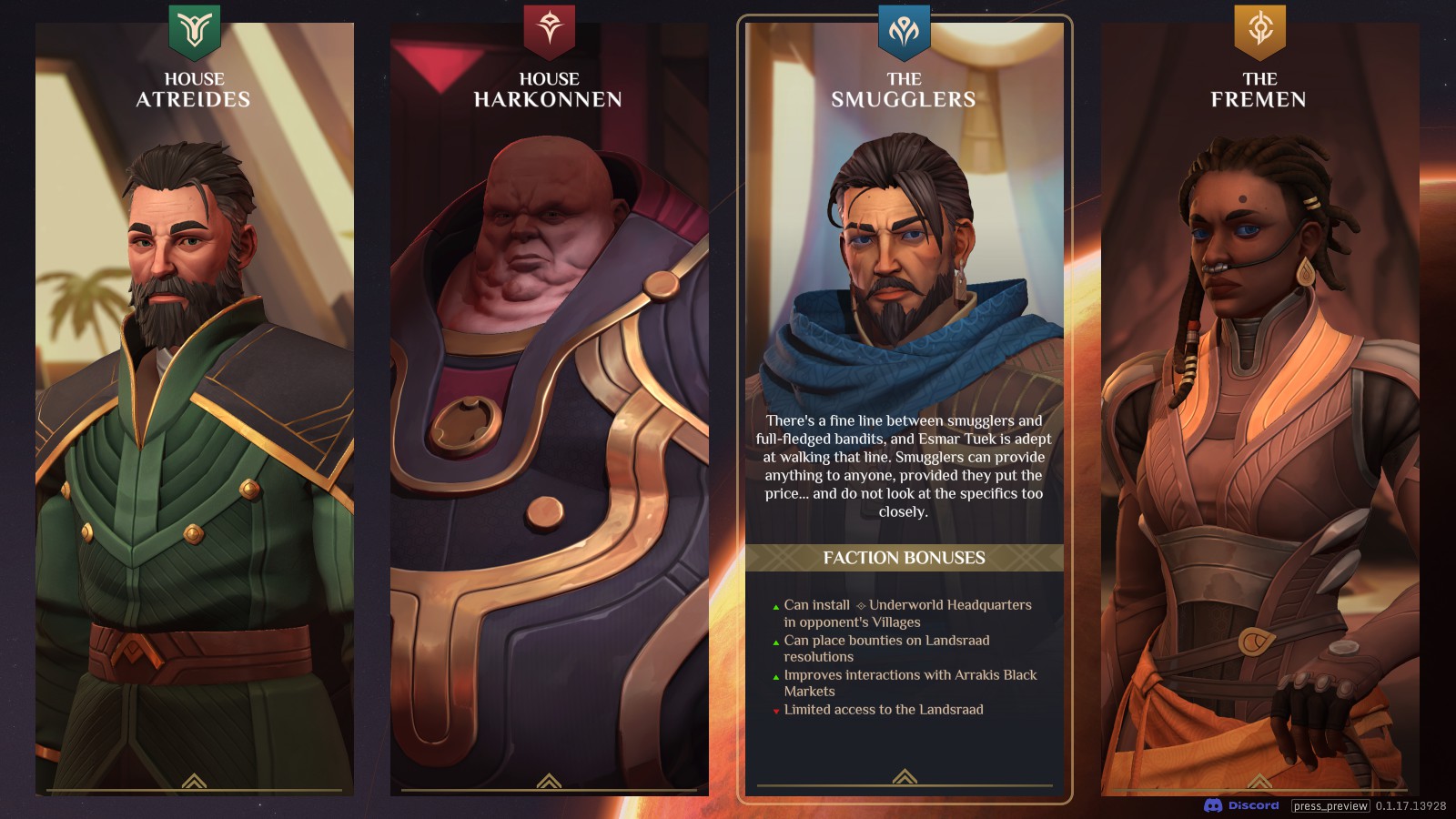 You can choose from four playable factions right now, with plans to add more later: House Atreides, House Harkonnen, Smugglers, and Fremen. As a former Ordos main, I was a bit disappointed by this selection, but I settled on the Fremen, Arrakis’ fierce native population.

Each faction comes with a few unique perks and disadvantages. The Fremen’s most unique power is the ability to summon thumpers that compel sandworms to rapidly carry their troops across the map.

Once you start playing, you’ll find a pretty typical 4X experience. A flying ornithopter can be used to explore the deserts of Arrakis, uncovering surrounding territories. To exert your will over the planet, you’ll need to train troops and conquer the local villages; only then can you fully exploit the nearby resources.

As you would expect, there are numerous resources to gather and systems to expand your power. You must harvest both water and the precious spice, as well as maintain your supplies of manpower. Your troops don’t just cost resources to produce, but also drain resources overtime, so you have to think carefully about when to expand your forces.

There’s also an extensive research tree, upgrades for your villages, ruins and other discoveries to exploit in the desert, and the Landsraad, which allows all factions to vote on political resolutions that can shake up how the game is played.

It is, to put it mildly, quite complex. If you’re used to this style of game, I imagine it isn’t too hard to settle into the swing of things, but as someone without a lot of 4X experience, I found it extremely overwhelming. 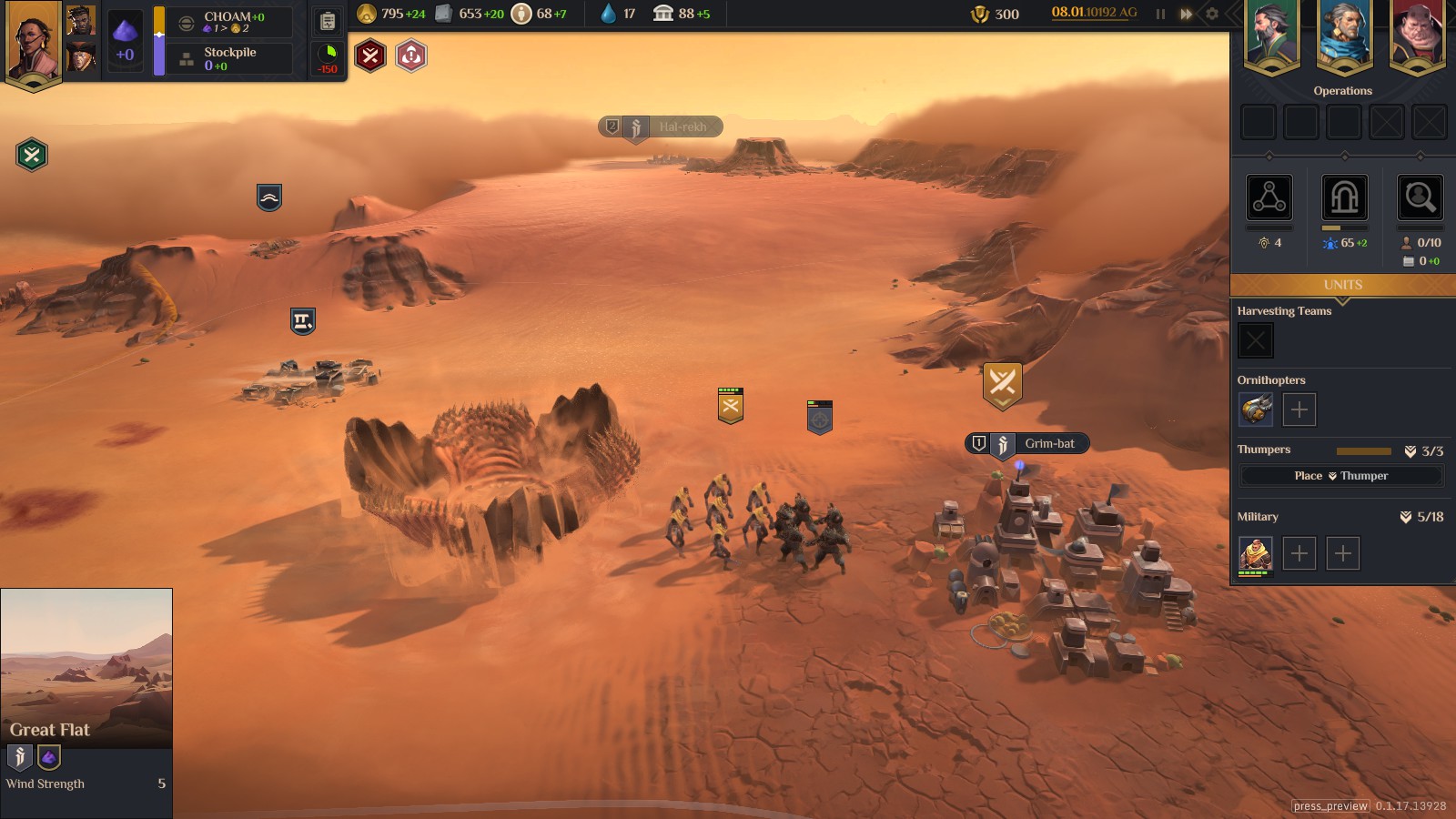 Making matters worse, this game has no tutorial in any meaningful sense of the term. There are some events that will pop up offering very basic instructions on the core mechanics of the game, but for the most part you’re simply thrown into the deep end and expected to swim.

Even that meager guidance can be easily missed. The notifications in Spice Wars are weirdly inconspicuous, consisting of only small icons clustered at the edges of the screen. I occasionally heard some soft chimes that might have been auditory notifications, but honestly it might have just been part of the ambient soundtrack. The notifications aren’t even clustered in the same place; some are at the top of the screen, while others are on the side. While I’m sure there’s a logic to what goes where, it was not immediately apparent to me.

This is perhaps most frustrating in the instance of sandworms. As is tradition for Dune strategy games, worms roam the map and may occasionally appear to devour your troops if they can’t make it off the sand in time. It’s something you want to respond immediately to, but the notifications for worm sightings are as easily missed as any of the others.

Obviously this is frustrating from a gameplay perspective, but it also feels like it fails the fantasy of how terrifying sandworms are. In the Westwood games, worms were clearly telegraphed with dramatic visuals and audio, and when your army fell prey to them, it was awesome and frightening. In Spice Wars, worms are as dangerous, but they don’t feel awe-inspiring. It’s just an irritating moment of, “Hey, where’d my dudes go?”

On the plus side, this is a very pretty game, at least considering what they have to work with. It’s difficult to make a world consisting of nothing but bare rock and endless sand visually appealing, but the vibrant colors and stylized graphics of Spice Wars do an admirable job of bringing beauty to the desolation.

I do think there is an audience for for Spice Wars, but I also think that audience is very small. I may not be an expert on the genre, but I don’t have the impression it’s doing enough to stand out from other 4X games on the gameplay front, especially with such an anemic features list at launch. It’s also far too complex and unforgiving to new players to be an appealing option to casual gamers who just want to experience the Dune universe in a video game. 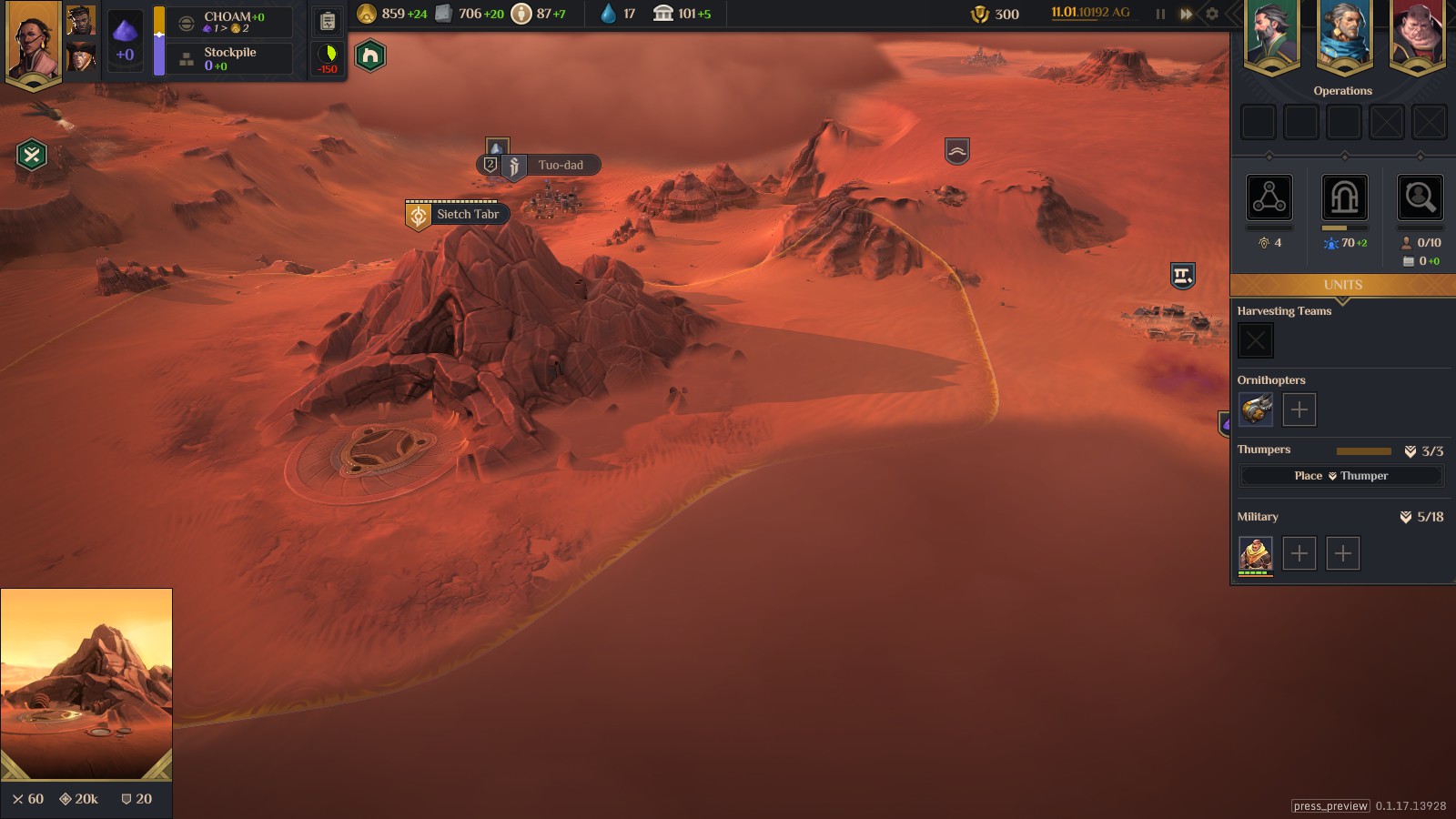 So if you’re a hardcore fan of both Dune and 4X games, I think you can have some fun here, but if you don’t meet both those criteria, Spice Wars is more likely to frustrate than delight.