If you were around the MMO genre back in 2009, you might remember when SOE launched Free Realms, a cutesy kid-centric MMORPG that was playable on PC and console. It was SOE’s first free-to-play title, in fact, long before the model had gripped the bulk of the industry, which saw it soar to 17M players in just two years.

Well, the game’s former creative director – and current Principal Creative Architect at Microsoft – hasn’t let the anniversary of the game’s launch on April 28th go by without some acknowledgement.

“[H]ere’s a never released internal video from our first year of development,” Laralyn McWilliams wrote on Twitter as a treat for veterans. “It’s before we decided on modern clothing styles, it has the original logo… and it shows the never-revealed Underworld.”

Free Realms went live thirteen years ago today! To celebrate, here's a never released internal video from our first year of development. It's before we decided on modern clothing styles, it has the original logo… and it shows the never-revealed Underworld. pic.twitter.com/uMty3Wa30w 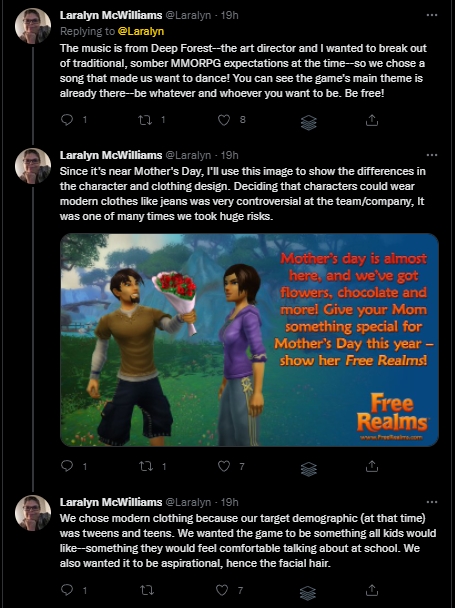 Of course, readers will also remember what happened to the game: It was one of many MMOs killed off by SOE in 2014; according to then-president John Smedley said that kids games turned out to be difficult as “kids don’t spend well” and “kids do mean stuff to each other a lot,” and besides, SOE needed its resources elsewhere.

“Looking back at it, it’s a shame that Free Realms didn’t get the backing to go the distance when titles like Wizard101, Roblox, and Minecraft show that there is a huge market for kids games — and yes, a way to support them financially,” MOP’s Justin wrote in our Game Archaeologist recapping the game’s saga last year.