There’s a lot going on in Pokemon GO, and it’s not waiting for August to start.

As we noted for July, Niantic is holding a Hisui event based on Pokemon Legends: Arceus, though it’s largely based on eggs, starting July 27th but lasting until August 2nd. During that time, there’s also a raid event July 31st from 11 a.m. to 2 p.m. local time for Hisuian Bravery. However, if you’re not a shiny collector, the passes are given out for up to two hours after the event, meaning you could raid Palkia instead, as it’s a fairly solid Dragon raider and PvP choice in Master League. Unless you’re into eggs and PvP, the event and new releases are mostly just for collectors.

Players are also getting access to a new feature, Daily Incense. As the name suggests, it’s incense players receive every day for free, except it lasts only 15 minutes, it’s limited to one per day, it requires walking for spawns, and it can spawn special pokemon, such as the Galarian birds that were datamined. What’s nice is that if a player doesn’t have enough pokeballs, the game will also grant 30 more so a player has ammo with which to catch the pokemon. Having had access to it from day one, I can say that it is a neat little bonus, but it also requires constant monitoring of your phone for a solid 15 minutes and it spawns more pokemon as you maintain a higher speed, so make sure you’re someplace safe.

And then there are the August events.

First, a word about Niantic’s “anti-cheat update.” Note the date: June 23rd, 2022. Nothing has yet changed, and we only knew that it was specific to spoofing when in a now-deleted tweet the Community Manager noted it on a personal twitter account. As I am still dealing with stalking and harassment in-game, I can tell you that if this is true, it requires a lot of effort on the user’s part: You will need to report the user name(s), affected gym(s) and possibly their locations, the time(s) you suspect the spoofing occurred, and possibly context.

And even then, nothing may come of it. This is partially because, unlike Twitter, Niantic will not notify you when/if it has dealt with the accused, nor will it let you know the results. I may have seen some results, but I’ve also been dealing with people physically watching me and my real-life friends, so I have put in a lot of time to mapping out my community and noticing odd patterns and new names. Unless this was put into the letter to be filled out later, it can largely be ignored unless a community is really putting in some effort to stop spoofers.

Now, to get back to August, let’s continue with events. August 13th’s Community Day will feature Galarian Zigzagoon from 11 a.m. to 2 p.m. and will be similar to Deino day in that it will spawn the pokemon’s “bonus” before then putting it into raids that no one in their right mind would waste tickets on, unless you enjoy spending money on the game for things you just spent hours getting for free. There is the bonus of avatar items and poses based on the pokemon via a special free quest, but as with the new Daily Incense, this feels like Niantic once again revealing how valuable your walking data is to them. 8/7 Update: Via PR, we were told the Sapporo Go Fest unlocked additional bonuses for community day: 4 total special trades, 75% less stardust used when trading, double catch xp, and double candy from transfers.

Do note that earlier this week, the bonus was changed to 4x Stardust, perhaps to artificially make Linoone seem more worthwhile or because of past complaints about perceived fewer shinies.

All that being said, Galarian Zigzagoon is a popular pick as it has the potential to boost its final evolution in PvP by quite a bit (depending on how the numbers fall), and it’s a shiny few people have, plus I doubt few people needed avatar item incentives to play anyway, but then again, maybe not.

August 10th to 16th is Niantic’s Bug Out event, which we’ve previously mentioned. Details are sparse, but obviously Bug-type pokemon (at the least) will be involved, and as we’ll discuss later, we’re guessing Mega Scizor will be part of the event, probably. We’ll update this section as Niantic gives us more details.

8/3 Update: Full details announced! We were right about Mega Scizor, Vikavolt, and Chill Drive Genesect. However, there’s a new bonus we couldn’t anticipate: the “raid bonus” spawns Niantic tends to use for recent Community Days will also be in affect for in-person raids with three or more players. Weedle is essentially the only useful pokemon that appears due to its Mega form, and the spawns are only for 15 minutes, but it is a reasonable bonus that doesn’t push the feature too hard.

8/7 Update: The page update notes Ultra Unlocks: additional XL/regular candy based on nice/great/excellent throws (but what that means is anyone’s guess), Unown T in raids, and Pansage appearing in the wild out of its normal region, plus a timed research for Mega Scizor energy. There’s also a preview of the new bug-catching pose to get you hyped for this month’s second free pose. 8/9 Update: We have player confirmation that the better the throw, the more candy you get, from 4 candy for a Nice throw to 6 for an Excellent, and yes, pinap berries double that.

August 18th to 23rd will be the 2022 Pokemon World Championships event, but we have no idea at this time what may be involved except maybe Unown.

🇺🇸🏆
Pokémon GO World Championships Event will start soon.
Here are all the details for the event.#PokemonGOApp #G2G #PokemonGOWorlds2022 pic.twitter.com/Zfaw2y6Fjf

8/11 Update: Niantic’s dolled out the event info, and there are no Unown. The perks are largely centered around PvP pokemon being more accessible, 50 total battles possibly per day in Leagues, special research granting Elite TMs (probably involving PvP), a t-shirt in-game if you enter a code given away on social media (and during their stream), and some Community Day moves. While Talon Flame and Gengar’s moves are largely for PvP, they’re useful for defeating Rockets. Gyarados’ Aqua Tail is in a similar situation, though quite usable in raids. Rhyperior is generally better for raiding, so PvE fans really shouldn’t miss this if they need Rock attackers or even a solid Rocket smasher with Rock and Ground moves. However, Meteor Mash is required for Metagross in any situation, so if you’re lacking one, fix that. It’s likely to remain the most accessible and among the best Steel types, so it’s a good investment.

Niantic barely mentioned it, but August 27th is set to be the 2022 Go Fest Finale. There’s essentially no information, but most people are assuming it’ll be a round-up of the in-person GO Fests, bringing the likes of Cowboy Hat Snorlax and three new Ultra Beasts, among a smattering of new shinies. Once again, we’ll have to wait and see what Niantic says about this in the future.

8/18 Update: If you want a free in-game shirt, click here for the redemption page. For those going after the pokemon behind the “Power Up X Times” quest rewards, you may want to look at your Flying Pokemon line ups, as they’ll be very useful against the two new Ultra Beasts and most people are lacking good Flyers.

8/9 Update: We’ve got a lot of details on the event, but it goes beyond our usual summary, so here’s a full post on what’s spawning, when, and where in the meta these fall. Sadly, no Cowboy Hats have been announced. 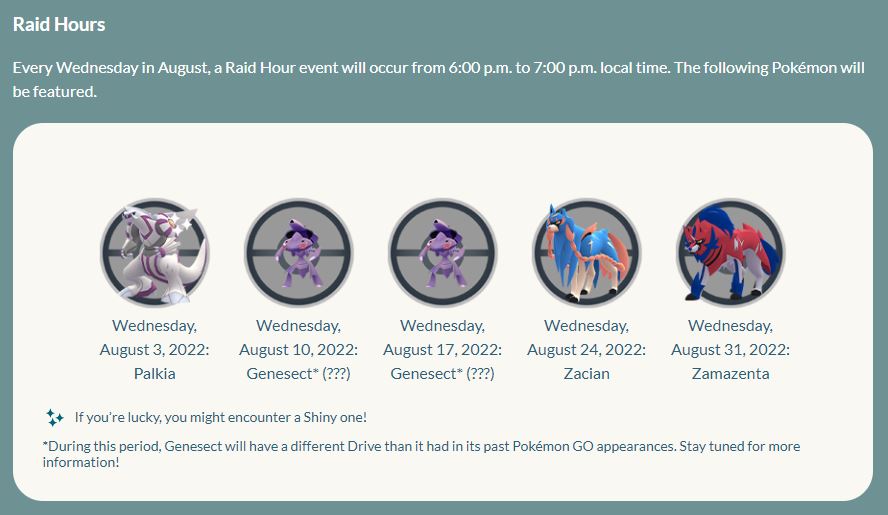 For this month’s raids, Palkia leaves August 10th, Genesect arrives that day and leaves the 18th, and then we get Zacian and Zamazenta until August 31st. To note, Genesect’s arrival is said to come with a new unannounced drive, but looking at the history of its release and what it can get, I’m betting we’re getting the Ice version of Techno Blast, though “Normal” is possible as well (but would be a huge letdown and a missed opportunity, as Ice works for the hot northern hemisphere and cool southern hemisphere). Of course, Niantic could be releasing both, as Genesect also gets two raid hours this month, but it may also be due to the Bug Out event.

Zamazenta and Zacian are both quite poor for raids as they both lack a STAB fast attack, but they are quite good for Master League PvP, with Zacian being considered a bit more powerful.

While this month’s known Megas (Abomasnow, Slowbro, and Ampharos) have been released several times and have had quests that give out their energy, we do have new Mega coming out August 10th to 18th. Many people seem to think it’ll be Mega Scizor, which is possible, but there is another opportunity here: Mega Alakazam has been recently dug up, and the Bug Out event would give people more options to battle it. Plus it would free Niantic up to release Mega Metagross or Mega Mewtwo in the future, as Alakazam is far outclassed by both of these and wouldn’t feel worthwhile as anything more than a collector’s items if it were released later (though one may argue Mega Latias and Latios have already done that). I’m still leaning towards Mega Scizor, though, not just because of the Bug Out event’s timing but because the Hisuian pokemon is coming out and Scyther has a future Hisuian evolution to release.

For the August spotlight hour, there’s not much to see. Hisuian voltorb may be the most fun as it’s the newest pokemon of the set. August 16th’s double catch candy is useful for cashing in on quests for any new pokemon that may be released during the Bug Out event that you may save in your quest overflow (simply “flee” from the rewards battle and the pokemon will remain in a stack, up to 100). You can also save evolutions for August 30th’s bonus, while transferring obvious duds on the 23rd, but all of this revolves around Niantic revealing what it has planned for this month so, as always, check back later for updates.