END_OF_DOCUMENT_TOKEN_TO_BE_REPLACED
Tomorrow, the Star Wars: The Old Republic development team will livestream parts of its newest expansion Knights of the Fallen Empire. BioWare promises to answer questions about the crafting systems as well as revealing some information about your companions. So why has it taken the devs so long to talk about the crafting and companion system when it’s so integral to pretty much everything in the expansion?

We know from E3 that our choices during the expansion will have lasting ramifications on our personal story. We know that some companions will be chosen directly through the story. We know that some companions will be killed off or will have departed our service because of the choices that we make, but we don’t know how that’s going to affect the systems that are tied to the existing companion systems. Unfortunately, we might not even have all the answers we are looking for when the livestream is done. So I have put together a list of questions that I believe need to be answered during the livestream that are specifically focused on companions and the systems surrounding them.

Will we still be able to run the same number of missions as we currently can?

Come the expansion, we will lose all our companions, which makes sense from a story perspective. We know that we will have been frozen in carbonite for five years. The chances of our companions just standing around waiting for us to unthaw is slim (except for Vette — what we have is special!), so they have likely moved on with their lives.

The problem this presents is that we have no companions to send out on missions, nor do we even have someone to stand around on our ship to craft anything. And we’re the big damn hero, so there is no way we’re going to do the manual labor, right? Does this mean that we have to take a reduction in the number of missions until we get our number of companions back up to five? 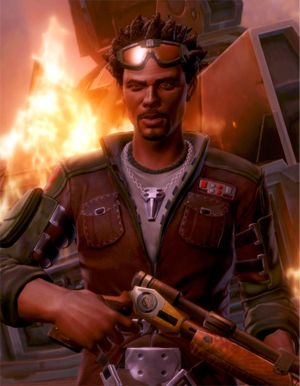 Are companions still going to have specializations?

Currently, if I want the best slicing materials, I have to (for instance) log onto my Sith Sorcerer and send Andronikos Revel on the most expensive slicing tech-parts mission that I can send him on because he has a critical bonus to slicing. I cannot do this on my Warrior because there are no innate slicing bonuses on any of the Warrior companions, Treek and HK aside. Of course, there are ways around this in the current game, but that’s beside the point of the question.

We need to ascertain whether there are going to be other factors — game mechanics factors — that will influence me to keep certain companions on my crew and not others. Although I am in favor of keeping decisions like that as part of the game’s mechanics, there are some who are not. In fact, I believe that is part the reason players can’t kill off companions right now. Because of the mechanical consequences, Sith Warriors cannot kill off Malavai Quinn, even though it makes perfect sense to do so.

We learned at Gamescom that companions will be more like Treek, taking on pretty much any role rather than the current specialization of healer, tank, or DPS.

Will there be achievements and bonuses attached to certain companions?

Currently, we can gain health, crit, and other bonuses by leveling up our companions’ affection. For instance, the Sith Inquisitor’s companion Xalek increases the amount of health the Inquisitor character has. And each companion gives a bonus to presence, which isn’t exceptionally beneficial to endgame, but it does boost your companions’ overall effectiveness.

If these bonuses are attached to specific characters, then that would mean that we have to repeat the content on many characters — choosing different paths — in order to get all the bonuses and achievements. I’m certainly not against that, but it would be good to know for mechanical purposes. And as much as I know to roleplay through the stories that BioWare is presenting, I have made alts of the same base class so that I can get certain achievements.

We know that there will be new companions in that we will meet in the expansion and proceeding chapters. We know that some of the companions will join us; some will not. Some will die, and some will leave. Of course, we know that about five of them will stick with us in when the story is said and done. But what does this mean for future seasons or expansions?

Although the answers to the other questions might render this one moot, it would be interesting to know if there will be anything guaranteed about the companions. I am all for consequences to actions. And for me, the consequences mean more if they are lasting and have repercussions in gameplay. However, MMO players, in general, are a little bit less forgiving when mechanics are drastically changed because of a story decision made earlier in the game. In some cases, it would be exceedingly nice to know that one companion or another is never going to go away.

The livestream answering questions about companions will air on the SWTOR Twitch channel at 8:00 p.m. EDT on Wednesday, August 26th. I will be in Seattle at that time, hopefully all settled in my hotel room and watching it. If not, make sure you ask these questions for me, if they aren’t answered. And unfortunately, I will not be interviewing any BioWare developers while at PAX either since they aren’t going to be there. Hopefully, the livestream can answer all of the pressing questions we have.

What are some things you are concerned with regarding companions? Do you think BioWare will answer all of them during the livestream? But most of all, I’m interested in knowing what you’re looking for in the new companion system coming with KotFE. If there is something major that players don’t like, hopefully BioWare has time to fix it; we are less than two months away from the soft launch of the expansion, which is an exceedingly short time to change things if they need to be.

Before I close this out, I’d like to give a quick update about the guild. We have added about 20 people to the guild this week, but we clearly have room for more. If you are without a guild in SWTOR, we would love to have you. Join the guild is pretty simple. Log into the game on your Imperial-side character and join the MassivelyOP channel (type /cjoin massivelyop) and ask for an invite. I might be in Seattle later this week, but in the evening, there will be someone who can invite you. Hopefully, I’ll see you in game soon.

Apollymi BryanCo  He’s lucky I didn’t use his entrails to decorate my ship Reaver style.  Or give him to Dark Jaesa as a toy.  She’d probably make a dress from his skin.

I just want to know are they going to fix the madness inquisitor or hatred assassin for pve? I have enjoyed them

I’m torn on knowing any more on this.  I usually avoid all spoilers for things I really want to see/experience such as the new movie later this year and this expansion.  But no matter how I try, snippets keep finding their way through.  Frozen in carbonite is a prime example, argh!

Anyway, my galactic hit list for annoying companions would start with Vett and Mako and that goody goody Temple from the Agent line.  Must remember to make choices that kick them off the ship for good.  Other than that, I’ve been leveling Republic toons like crazy, just cause, you know, must have one of each, but now I’m not sure how far I should be going to earn their affection.  Oh well.

These are all fine questions. I am also worried about keeping my ship.  I am a smuggler I rather feel like my ship is part of my identity.

This companion reads like one hawt noir novel, and I can’t wait to get my hands on him.

If playing MMOs for as long as I have has taught me nothing else, it’s taught me not to press developers for answers to questions that they haven’t decided yet. If companions and crew skills are still being worked on, then I don’t want to hear about a decision that they may change later. I can wait for the right answers.

RicharddeLeonIII After you un-freeze your illegitimate kid will be knocking on your ship door and Mako will answer it for you.

I found my own way to deal with the Malavai Quinn issue.  I just gave him the ‘Infected’ customization from the Rakghoul Plague event and imagine that I turned him into a shambling zombie that is still, somehow, able to heal.

jauffins SWTOR is doing great, in my opinion. Lots of people to play with and lots to do. I’m not sure about your grouping comment–I’ve never experienced that.

Not So Massively: Age of Empires IV is a thoughtful love...