Announced earlier this year, Chronicles of Elyria is a startup sandbox in a sea of such sandboxes, but some of its features are rare even within the MMORPG genre.

Massively OP will be hosting a series of exclusive dev diaries from the CoE team over the next few weeks to further explore the game and solicit feedback and questions. The first such blog written by the devs themselves is presented below and covers the more unusual mechanics that underpin the gameworld, including aging, death, offline leveling, and family genetics. Soulbound Studios, the company behind the game, even addresses its planned business model. Enjoy!

Chronicles of Elyria is the next generation of MMORPG

Chronicles of Elyria is a pre-release sandbox MMORPG looking to change the very essence of MMOs. As a skill-based MMO with an epic set of features never before seen and a new business model, there is a lot to be excited about with CoE.

From the start, Chronicles of Elyria has been designed to avoid boring starting zones, repetitive grinding quests, and static end-game dungeons. Fearless in its design, CoE is made by gamers, for gamers, not as another WoW clone.

While the full feature set has not yet been released, there are several announced elements that are getting the attention of MMO players.

In Chronicles of Elyria, your character visually ages, going from a youthful child through to old age. This includes growing taller, developing scars, hairlines receding, and more. No more running around the world with everyone looking the same. 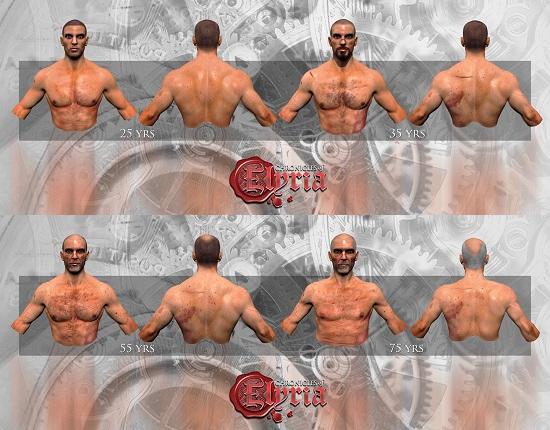 Chronicles of Elyria also has a well thought out permadeath system. During normal play you can get knocked out or receive a fatal wound in which your soul temporarily leaves your body. Neither of those are permadeath. But each time your soul leaves your body your soul’s connection gets weaker, shortening your total life span. When you reach your maximum age, that’s DYING, which requires a new character.

CoE strongly feels that aging and death adds a dimension of realism, a dynamic & immersive feel, and a layer to the story that most MMOs today are missing.

MMO subscriptions can easily cost you $200 per year to play. Chronicles of Elyria uses a unique business model that harkens back to the days of coin-op arcade machines: charging on a “per life” basis. Each life provides approximately one real-world year of play before the character dies of old age. No exact price has been set, but CoE anticipate lives will be on par with the retail cost of other PC game expansions – between $20 and $40 USD.

Charging people “per life” ties in closely with one of CoE’s core design principles. CoE believes heroes should be truly heroic and villains should risk real consequences for their actions. By tying the cost of the game to a player’s lifepsan we force them to make meaningful choices about their in-game behavior. 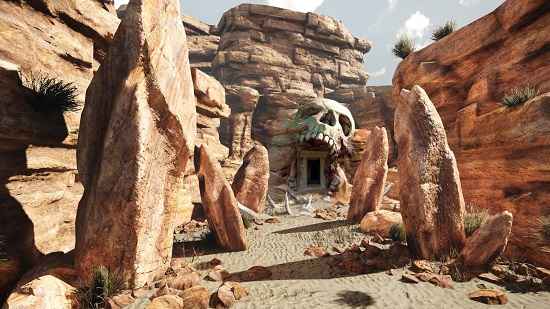 Chronicles of Elyria introduces a new type of character: the Offline Player Character (OPC). OPCs are a hybrid between a player character (PC) where a human is directing character choices and a non-player character (NPC) with decisions made by a computer. OPCs allow characters to continue to evolve and prosper even when you, the player, is living your IRL life.

Whenever you sign off, Artificial Intelligence takes over and plays your character for you. But, we all know AI is never as good as the real thing, so CoE is working on a system that allows you to create and trade scripted Behaviors for your character to do things like train skills, run a storefront, perform weekly trade routes, and more.

Chronicles of Elyria features a full family system, plus the ability to start the game at age 15 or as an established character by taking over the life of an existing NPC. Families serve many of the same purposes as guilds in other MMOs. They provide a small, supportive social structure with a sense of identity. Families also tie into the game’s progress system by allowing you to pass resources you’ve gathered over a lifetime onto your heirs. 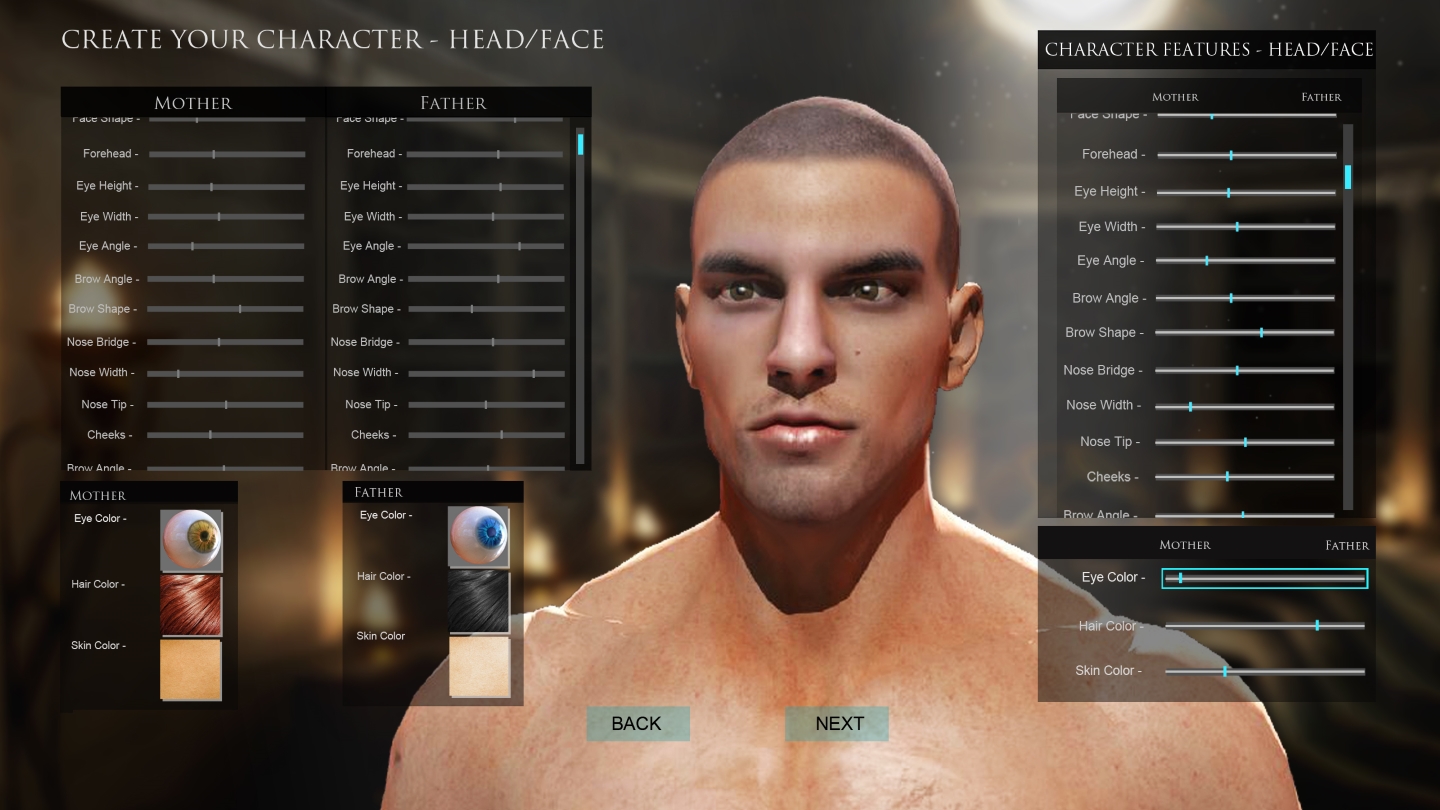 During character creation your selection of a family, through a combination of nature and nurture, dictates many of your character’s beginning attributes such as your starting ability scores, initial skills, and the possible set of physical attributes for your character.

These features are just the tip of iceberg of what Soulbound Studios wants to accomplish with Chronicles of Elyria. Click over to the site to learn more about character customization, permadeath, or the 5 core design principles. You’ll be hearing a lot more about the game over the coming weeks and months as they continue to release design journals, feature updates, and new information.

Stay tuned for more dev blogs from the Chronicles of Elyria team over the next few weeks!

IanSeanCoulter ToyFuzion We feel as though our game will allow an unparalleled level of Roleplaying. Not only can you build your legend as an individual, but as a family – a lineage. You can live the legends of your children, and your children’s children. Everything you do will contribute to your family’s overall legend.

SirMysk This is a low fantasy mmo so no dragons most likely.

ToyFuzion This game is technically its own story though. Its perfect for RPers! I understand what you mean by not wanting to lose a character but you get to have many who each get to have their own story. If you cant get at least one story out in a year your progressing way to slow :P

Mikey Moo You have to die A LOT at a young age to even permadeath. You still get months of play time!

scathson I think you misunderstand the groups intentions though. Yes, they want to make a profit but they are building this game with their own money no publishers or investors yet as far as I understand. Also, a life lasts up to about a year on average if you do not die often. The amount you pay for that is almost nothing compared to subscription based games. Most sub games would have charged you the same amount within 2-3 months

PaganRites Lethality  So currently they are doing all of this with their own money. They said though that in a year or so they will look for investors in their idea as well as possibly open up a kickstarter. So to answer your question…No you currently cannot but feel free to join the community  at https://chroniclesofelyria.com/  and stay up to date with the game!!!

I’m glad to hear that, but I remain skeptical. I’m glad to see MMOs trying different things all the same.

SoulboundStudios dragonherderx Oleg Chebeneev Well that is good to know that there is a way implemented to combat it. I’m happy to see consequences for actions were thought of.

Having a character die off in a year doesn’t appeal to me as a RPer. I tend to RP characters for years, and would hate to see my little e-Baby kick the bucket before their stories are told. D: