I don’t write a lot about the Star Wars: The Old Republic roleplay community because I don’t usually like it to be known who I am in the community. I want people to react to my character, not to me as the player. However, I recently started playing a character that people would recognize me as the player, and surprisingly, I was able to find a group that takes me at face value and not as a writer for Massively OP. Because of this group, I have been given a unique perspective on the roleplay community as a whole and the struggles it goes through.

And the biggest hurdle for the roleplay community has been Knights of the Fallen Empire.

The expansion not only introduced a brand-new faction to the entire universe but bumped the timeline up five years. Not only do characters and factions within the existing world change over five years, but introducing a new faction adds that much more complication to the world. Many times, it’s the little things that elude us roleplayers. Many things that people would use in regular conversation are completely lost on us because we just don’t know the answers, or the answers are buried so deep in some fragment of conversation that we lose them.

I’d like to take a moment to go over a few of the lore-related facts that will make your roleplay experience in the Knights of the Fallen Empire expansion in SWTOR. If you’re not interested in roleplay specifically, hopefully I can give you some insight into the story of KOTFE that you never noticed.

I wanted to roleplay a Zakuulan in my current circle because it would have made for an interesting dynamic within the group. But the hardest thing to find out was the day-to-day for the average Zakuulan. Most player characters you’ll meet are not the Uncle Owens of the galaxy, but it is important to understand what the Zakuulan Uncle Owen is like so that we have an understanding of the more extraordinary characters.

I don’t know whether the writers were intending Zakuul to be a commentary on communism or true socialism, but that is very much what the Eternal Empire is. But unlike the communist states on Earth, the Eternal Empire actually works, and many Zakuulans like Koth Vortena attribute the success of the empire to the immortal emperor Valkorion. The average Zakuulan has a place to live, everything he could want to eat and drink, and the biggest, most powerful defense force in the galaxy protecting him.

So that explains the upper levels of Zakuul, but what about Breaktown and other shady parts of the world? This same question crossed my mind, too, when creating my character. If you have all your needs met, why would a person go to a place like Breakdown? Why would Breaktown even exist? The best answer that I could come up with is complacency.

When you need nothing, the things that guide you are desires. Some people in the Zakuulan empire are progressive and build things like the sun reactors, art, and other amazing parts of the upper cities of Zakuul. However, others feed off the terrible parts of society. They live off the pain of others or enjoy being the ones in pain. I’m going to assume that credits in the Zakuulan empire go toward feeding these desires and there are still plenty of have-nots to go with the haves. And of course, this is also where you find the cultists like the Heralds of Zildrog.

I’m assuming that there are other extremist organizations on Zakuul that also take advantage of the downtrodden, but the one we hear about during the Lady of Sorrows chapter is the Heralds of Zildrog. And it’s clear that certain organizations can become powerful enough — likely through but not limited to money — to take over certain parts of the major Zakuulan cities.

Ultimately, Zakuulans fall into one of three major tiers from my perspective: The upper crust, needy, and the zealots.

The Republic is pretty much the same 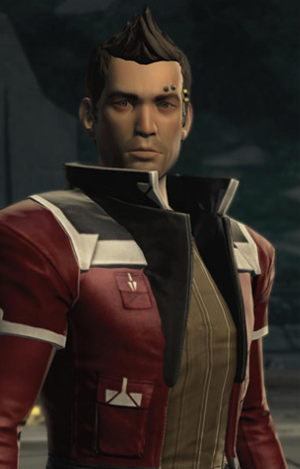 I don’t want to suggest that the Republic hasn’t gone through some horrible things. There were many Republic planets that were hit hard during the Zakuulan invasion. But I asked lead writer Charles Boyd before the expansion released if he could tell me which Republic planets were hit, and he said that there wasn’t a list that he could give me. Being the skeptic that I am, I interpreted that to mean that they just haven’t decided yet so that they can throw it at us in later expansions or chapters. However, might more charitably assume that they have a list but are unwilling to reveal it because it might change in the future.

That said, we do know one planet that was hit hard post war: Bothawui. Theron Shan tells of a Star Fortress that was stationed over Bothawui that seemed mostly inert, but then all at once, every rebel against the Eternal Empire was wiped out at once. I’m assuming this means that some people survived, but it also means that many Bothans died to bring us this information. (I am a terrible person.)

Although we know that the Republic Senate is still in place, Lana Beniko mentions that Chancellor Saresh still controls many of the senators are still in her pocket. This means that the war with the Empire is still on-going. For some reason, Saresh still has a major problem with the Sith Empire, despite there being a new, major enemy stealing many of the Republic’s resources.

The crazy thing about the Republic side of the story is that it seems that next to nothing has changed, despite the fact that many of the worlds’ leaders have changed. SNAFU.

As an Imperial player and roleplayer, I’m still trying to wrap my head around what has happened to Empire. Most everything that we learn is from Lana, and she should have the inside track: She was the Minister of Intelligence. We know that prior to the Outlander’s placement in carbonite, Darth Marr was respected and led the Empire without actually calling himself emperor. However, we all know by now what happened to Darth Marr. That left at least 10 other Dark Council members vying for ultimate superiority, but none with the powerbase to actually make things work. They just didn’t have enough time to actually grab power because the Eternal Empire attacked. According to Lana, all the Council members were killed or fled, save for Darth Acina, whom you might remember from the seeker droid questline. She declared herself Empress and now runs what’s left of the Sith Empire.

But many questions remain: Is there a Dark Council? Council members fled; did their powerbases leave, too? It’s troubling playing a Sith character at this point because everything seems to be changed. However, I do have a suggestion for Sith roleplayers: Find a powerbase of your own. This could be a guild or a group of individuals; it doesn’t matter. But the biggest thing to understand is that everyone is struggling at this point. No one is in a good place in the Sith Empire, and unlike in the past, the Sith are the underdogs. If you like to RP as I like to RP, then this is exciting.

Let me know what you’ve found out in the comments. Was this helpful or at least fun? With all the other sites giving guides on gameplay, do you want to read more story-driven articles? Thanks for reading, and may the Force serve you well.