One of the reasons new players find it so difficult to get into older games is because there is so much to do that you don’t know where to start. Few games exemplify that better EverQuest II; there is literally so much content that many newbies — and even returning players — have thrown their hands up and surrendered. Even if you take out everything else (housing, player dungeons, crafting, collections), there are so many different zones, how do you know where to go just to adventure? What you need is a handy guide. And here it is!

Although it’s not a sandbox, EQII does not force players along a rigid leveling path. There are so many zones that players can literally pick and choose what experiences they want as they adventure. You can start along the historically good path or the evil one or move fluidly between the two. There’s also a Golden Path you can follow after you wrap up the starting zones. But even there you have choice: Unlike other games, this Golden Path merely points you toward signposts to nudge you in a possible direction. As long as you check in with the NPC at the appointed levels, you can go anywhere you want to obtain said levels. If you put the wander in wanderlust (and I do), you can meander all around Norrath exploring.

Whether you want to detail an exact travel plan ahead of time or you just need an occasional glance to remind you of the choices, this guide will point out all the possibilities for where to go next. You can pick from any zone on the list in each level range and keep to that one, or move between them for something different. Keep in mind, however, that each zone has its own dungeons and quest chains, so hopping between various zones willy-nilly may cause you to miss story! The good news is you can simply pick differently on alts to experience things you miss — which coincidentally makes playing alts a new experience in more than just the class. 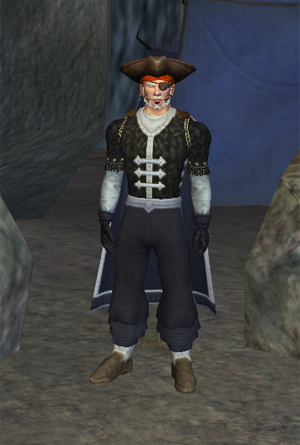 Going for the Gold(en Path)

Before breaking down the zones, let me first explain the lauded Golden Path just a bit more — especially since you won’t find anything by that name in game! The Golden Path was one way EQII tried to help direct players when the choices of where to go and what to do got dizzying. Of course, you have to know where to find it to be able to start it!

The Golden Path is actually a six-part Hallmark Quest series called The Legend of Roger Goldie. Players who are level 32 or higher will notice the NPC Ole’ Man Silvers has a quest for them if they choose to visit the Highland Outpost in Butcherblock Mountains. All Silvers does is tell you to meet him in a specific zone once you reach a specified level. Of course, you can obtain those levels by working your way trough the current zone and then heading into the one he mentions, but you don’t have to; those who want the rewards of doing this timeline can simply go wherever they want and then just head back to talk to him once they meet his prescribed level requirement.

Now the question is, where do you want to go for your XP?

All players can start on the Isle of Refuge, but which version is determined by which alignment you chose based on your race. The name gives it away: the Queen is Antonia Bayle of Qeynos and the Overlord is Lucan D’Lere of Freeport.

The dedicated starting zones go to level 20, but players can opt out of them earlier to go to the next zones, or forget them altogether in favor of a more old-school EQII experience in Qeynos and Freeport.

There’s nothing keeping players in the newer starting areas until 20, but the questline is designed to move you smoothly through there (and gives you an armor set and a horse to boot!). Those who prefer to venture into the other zones will have to hop between them more frequently.

The city sewers stop being useful after around Thundering Steppes and Nektolos Forest are the two original zones of Norrath for leveling, but Butcherblock added even more options (along iwth the Golden Path).

In the middle ages

Butherblock and Steamfont are the newest zones in this range if that’s your thing. Rivervale can only be accessed through Enchanted Lands.

Here is where the zone progression between the Qeynos and the Freeport sides finally breaks apart: Everfrost and Lavastorm have slightly different ranges. For the getting the most out of the least amount of zones, go to the Sinking Sands at level 45.

In this range, The Village of Shin has the most staying power, letting players go through a whole extra 10 levels beyond the others. Like Rivervale was to Enchanted Lands, Pillars of Flame is located within The Sinking Sands.

At this point, zones stop making any attempt to adhere to ranges of 10. Players who want to leave the confines of Norrath’s continents can venture up into the trio of Tenebrous Tangle, Barren Sky, and The Bonemire in the sky, accessed via wizard spires.

For a seamless run through levels, choose Sundered Frontier. For a chance to visit a variety of zones and experience different environments, hop between a selection of the others.

In the home stretch

Again, Sundered Frontier can get you through this entire range, but then you’d be missing some spiffy Dwarven architecture in The Great Divide! Stonebrunt Highlands is actually connected to Sundered Frontier, so moving between the two is fairly easy — if you have your flying mount!

Some of these zones pair up: Cobalt Scar follows The Withered Lands after Eastern Wastes (which comes after The Great Divide) and Obol Plains follows Eidolon Jungle. All zones past level 95 (as well as the levels themselves!) can only be obtained by purchasing expansions beyond what is available currently in the base free-to-play game. Tranquil Sea and Phantom Sea can only be accessed by those who own Altar of Malice, and Far Seas Distillery can only be adventured in if you own the Rum Cellar DLC.

The newest zone, this area can only be accessed by players who own the most recent expansion, Terrors of Thalumbra. However, any level can enter this underground region to harvest and collect shinies, but questing, mob-killing, and dungeons are really only doable by those at level 100 or higher (as soon as there is a higher).