END_OF_DOCUMENT_TOKEN_TO_BE_REPLACED
Knights of the Fallen Empire has truly changed the storytelling ways of Star Wars: The Old Republic. And even though it’s popular to flame the game because of the lack of focus on endgame, the casual player and those who are interested in fun, character-driven tales are likely to be enjoying the monthly chapter releases. This month, we get a treat because we actually get two chapters in one month. Next Tuesday is early access to the next chapter, The GEMINI Deception, whose title makes no sense unless you’ve been playing all the chapters so far. However, you should at least recognize that it features SCORPIO, the droid from the Imperial Agent class story.

SCORPIO happens to also be one of my favorite characters in the entire game. She interests me because she really doesn’t want to be there, but she sticks around for very devious reasons, even when she is no longer compelled to be there by programming.

If you haven’t guessed, this article is all about the diabolical droid SCORPIO, and also if you haven’t guessed this whole article will be full of spoilers for both the Agent story and for Knights of the Fallen Empire. If you’ve not played through the entirety of Knights of the Fallen Empire or the Imperial Agent at this point, I’d first ask, “What’s wrong with you? Do you not like good storytelling?” then I’d also suggest that you not read any further until you have done both or if you care about being spoiled. (That’s my spoiler alert by the way. There are major spoilers beyond this point.)

She was the protector of the Star Cabal

She has a human form

I’m not sure exactly why this is a thing, but SCORPIO actually had a human form, or at least, a projection of a human form. It’s a little odd that the writers decided to give her a human projection. She seems too egotistical to really care about being anything other than a droid.

However, if you play through SCORPIO’s companion storyline, you know there is a point when she can be allowed to access your ship’s computer systems. At that time, she will project herself as a hologram and speak to you. Of course, she doesn’t keep this form because how is she supposed to kill you in your sleep if she’s just a projection? 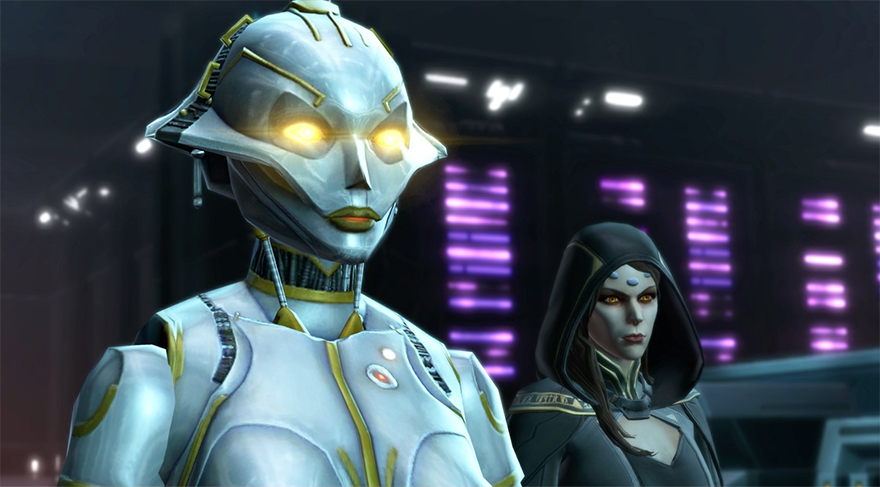 SCORPIO was one of the first companions players could play publicly

Before the game officially launched, BioWare wanted to show of the companions and how they functioned as both a game mechanic and as a storytelling device. On one of the machines at E3 2011, BioWare dropped an Imperial Agent — a sniper, if I recall correctly — to show off one of the Tatooine stories and to show how companions work. I recall the developers specifically saying that this companion didn’t show up for much later, but they wanted to show off SCORPIO anyway. She also didn’t have any dialogue during the cutscenes because she wasn’t supposed to be a companion yet. (As a side note, this was also the first time we saw how speeders worked, too.)

When we saw SCORPIO in the earliest SWTOR previews, she was carrying a blaster. Clearly, it was intended that she would carry a blaster, but for some reason — perhaps the developers felt that the Agent didn’t have enough melee companions — SCORPIO used a staff when the game actually launched.

Personally, I think SCORPIO works better with a staff, but when KOTFE launched, SCORPIO once again carried her blaster rifle. I’m not sure exactly why BioWare decided to change it back again, but I guess it doesn’t matter at this point since players have about 30 companions to choose from.

She’s voiced by the mother in Silent Hill

I’m a huge fan of voice acting and voice actors. But I had never heard of SCORPIO’s voice actor Deborah Kara Unger, and that was because she doesn’t have any other voice acting credits. However, she does have a truck load of acting credits; she’s appeared in many smaller films, like Highlander: Final Destination, Payback, and The Hurricane. However, Unger does have one other tie to video games: She plays the mother to primary antagonist in the movie adaptation of Silent Hill.

She kissed your ship droid

Officially, BioWare will say that there is no romance option for SCORPIO because she’s a droid, and the world apparently isn’t forward thinking enough to consider a droid/humanoid couple, although that would make an even more controversial Cheerios commercial. However, if you’re 2V-R8, then you might actually have a chance with this droid seeking her own “personal evolution.”

On April 1st, 2012, BioWare teased the Ship Droid Experience, where supposedly you could experience what it was like to play as a ship droid. You could clean, paint, and change the fabric on the seats. However, the best part was a little video showing that you could romance SCORPIO.

Of course, this was an April Fools’ Day joke, but it was funny nonetheless.

Lastly, we can’t mention SCORPIO without mentioning her origin, which is coming to light with KOTFE. In the latests chapters, we are learning about the GEMINI frequency and the ship droids that run the Eternal Fleet.

Originally, we were led to believe that the GEMINI droids were based on SCORPIO, but it’s becoming clear that it was SCORPIO who was based on them. Unfortunately, we don’t know why SCORPIO has been hiding that piece of information, but it’s likely why she joined the Outlander in the first place.

What are your thoughts? Did I miss any cute or interesting tidbits about SCORPIO? What do you think about SCORPIO’s origins? If I apologize for the cheesy title at the end of the article, does it make it better? Let me know your thoughts in the comments below!