SuperData’s July 2017 revenue report isn’t going to surprise anyone, I suspect, but it’s worth a look. On the PC side, there are no new entries since last month, and though League of Legends still tops the list in terms of global revenue, the rankings have been reshuffled, with World of Warcraft moving up to 5th, Dungeon Fighter Online displacing Crossfire, PlayerUnknown’s Battlegrounds holding steady in the middle of the pack, and Dota 2 slipping down several places. (Expect Dota to resurge next report.)

On mobile, Pokemon Go has returned to the list for the first time in several months, landing at #7. Lineage M debuts at #3 for mobile, but Honor of Kings and Fantasy Westward Journey retain their top spots.

The analysis firm throws nods to Grand Theft Auto V, still riding in the front car of the console train. “Grand Theft Auto V stands strong for another month,” SuperData says. “Through its microtransactions model, GTA Online grew significantly year-over-year for the month of July across console and PC. It did not outperform its record-breaking numbers in June.”

And don’t forget about Roblox, which continues to make more money than god.

“Roblox hits record high MAU on PC. Roblox continues its upward trajectory with a sequential-month gain in monthly active users. On the other hand, monthly revenue appears to have temporarily leveled off due to a slight drop in both conversion and ARPPU.” 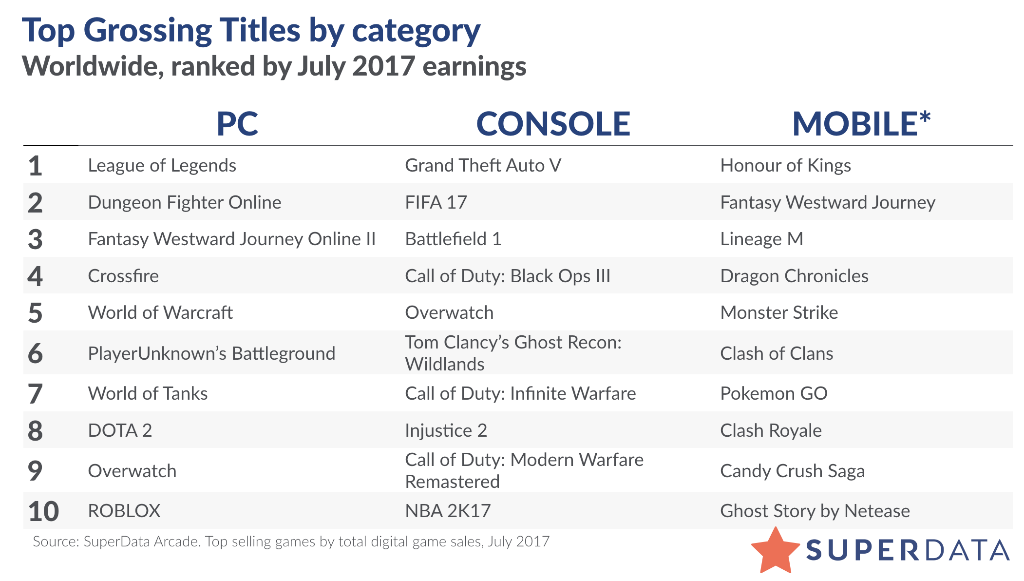