END_OF_DOCUMENT_TOKEN_TO_BE_REPLACED
Remember that big quality-of-life update that Secret World Legends launched mid-November? Chances are your quality of SWL life did indeed improve with a number of those changes. Mine did. Some you may have been enjoying are the new summoned vendor that visits you in the field, or the teleports that allow you to pop instantly back to the three hubs to do your business. Perhaps you’ve gotten one of the new weapon-specific belt talismans (one of the 10 actually works for all weapons) that are mob loot drops. You might even have been having some fun in the Seoul Fight Club with its equal-footing PvP matches. Surely you’ve appreciated the new loot added to dungeons, scenarios, or lairs.

While I certainly benefit from all these other improvements, two of the biggest changes for me have been the anima allocation system and the XP transfer on empowerment. The two are actually tied together, along with the reduced cost to recover glyphs and signets. I wanted to give it some time working with the new system before talking about it. And I’ve concluded that more than just quality of life improvements, these tread a bit into the game-changer category.

This is all about the bag space! No, really. Gone are the days of carting around multiple gear sets to use in different instances (not to mention all the other pieces for empowering all those different sets!). Yes, individual players might actually still choose to do that, especially with a tanking set; the special bonuses on gear is still aimed at either DPS, tanking, or healing. But many players won’t feel the need to specialize for every contingency. I have found I can condense my gear down significantly, clearing up a chunk of space in my inventory. A few times I have had to choose between a DPS or healing bonus, but I think for my level of play it will work just fine mixing the effects a bit.

So what exactly is anima allocation? It is the new way to determine how much of your build leans toward survivability, damage, and healing instead of by specialized gear. The gear has power points, and then you use the anima allocation interface to select what percentage of that power is allocated to each of the three stats. You can toss 65% into damage, throw another 20% into survivability, and dump the remaining 15% into healing. You can change the numbers however you want easily by typing in or just dragging the indicator. On the left side you can clearly see what benefits each build will give in relation to each stat. You truly customize your build your way.

It gets better: You can change the set up at any time! This has been really helpful to me when I need to switch to a stronger heal build when facing something in particular or amp up the survivability to get through. It is also great when you need to change up roles when in a dungeon without having to drag multiple gear sets with you (thereby taking up valuable room in your bag for loot!). This added customization that allows so much more flexibility.

If you are fairly new to the game, realize that this feature doesn’t open up until you hit level 20. Until then, you have the default 60% damage, 20% healing, and 20% survivability build. 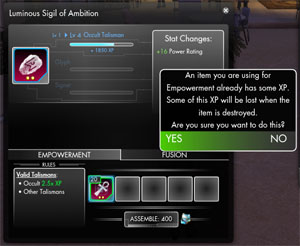 Wait, so if I am not empowering multiple other sets, what do I do with all these extra pieces of equipment I have decided no longer need? Not counting carrying different weapons, I count that there are seven separate talismans, and I personally was building up healing and damage sets. Those aren’t wasted, mind you: You get to feed those unneeded pieces into the ones you are going to keep. Now that 40% of the XP already empowered in your item transfers to the new one, it isn’t as big of a loss as before when none of the XP did. (Keep in mind that fusing items together to create a higher-tiered item still does not add any additional XP; all fused items start at 0.)

Another beneficial change is that all talismans of like kind (using the same slot) now qualify for the 2.5x bonus XP multiplier instead of just ones with the same stat. For instance, an occult item will give the full XP bonus when empowering an occult item. Before, only a health occult would offer the bonus with a health occult, making it harder to find these matches. This goes for signets as well; signets of the same slot will now qualify for the 2.5x bonus XP multiplier for empowerment while fusion remains unchanged.

Hint: You might want to not go as overboard clearing your bags as I did while showing the feature off on OPTV. Your gear could still be used to fuse with the gear you are keeping to upgrade it to a higher tier. I probably shouldn’t have fed my maxed out greens or blues into pieces because they could have been used to fuse instead! Oops.

Speaking of being careful when you feed items to other items, you probably do not want to feed your favorite glyphs and signets into the new gear because they are destroyed. You may want them to upgrade others, or you may want to put them in other gear. Thankfully, Funcom permanently reduced the cost to recover the signets and glyphs on all items that are Mythic level and below. The costs now are as follows:

I didn’t expect this, but I give Funcom many kudos for this next surprise: Knowing that the new system would cause a large increase in the need to yank out the gylphs and signets, the studio offered an additional reduction in cost to do so for a limited time. From the patch launch until November 27th, all costs on removing glyphs and signets from gear were reduced by another 80% in addition to the scaling cost changes in this update. Sadly, that discount is no longer available, but the new permanent reduced cost is.

Sweet! Thank you for the informative read. I plan to hop in today and see what it’s all about.

These changes look great. Looking forward to checking them out after I break my ESO and WoW BG addictions.