Most western MMORPG gamers know about Bless Online’s mechanics and visuals thanks to years of watching the game developed from afar. What hasn’t crossed the ocean and language barrier as easily is the lore, which is something Neowiz is helping to rectify today! The studio has granted us an exclusive dev blog covering this half of the playable races in the MMO – specifically, the Hieron, whom we’ve already discovered is the gloomier of the pair. Read on for the details and new images, then stay tuned for the launch of the official website next week and the eventual early access release!

Hieron is one of two warring factions in the world of Bless Online. After the dark ages and the Holy War, human, elf and lupus heroes formed a pact and together succeeded in driving the barbarian tribes from their lands. With victory achieved under the human Eiger the Great, and the foundation of the Habichts Empire, the Hieron Sacred Alliance between humans, elves, Mascu and Lupus was brought into being.

Hieron has ruled the Northern continent for hundreds of years, strengthened by the alliance of its people and their dedication to protecting the realm from the onslaught of invading barbarian forces. The four unified races under Hieron believe that in order to maintain the peace and stability achieved through the Holy War of the Dark Ages, they must unify the whole continent. To make this a reality, the races are actively cooperating with the Holy Empire, which has taken on the central role of being the northern continent’s leader, in the war against the upstart Union races. 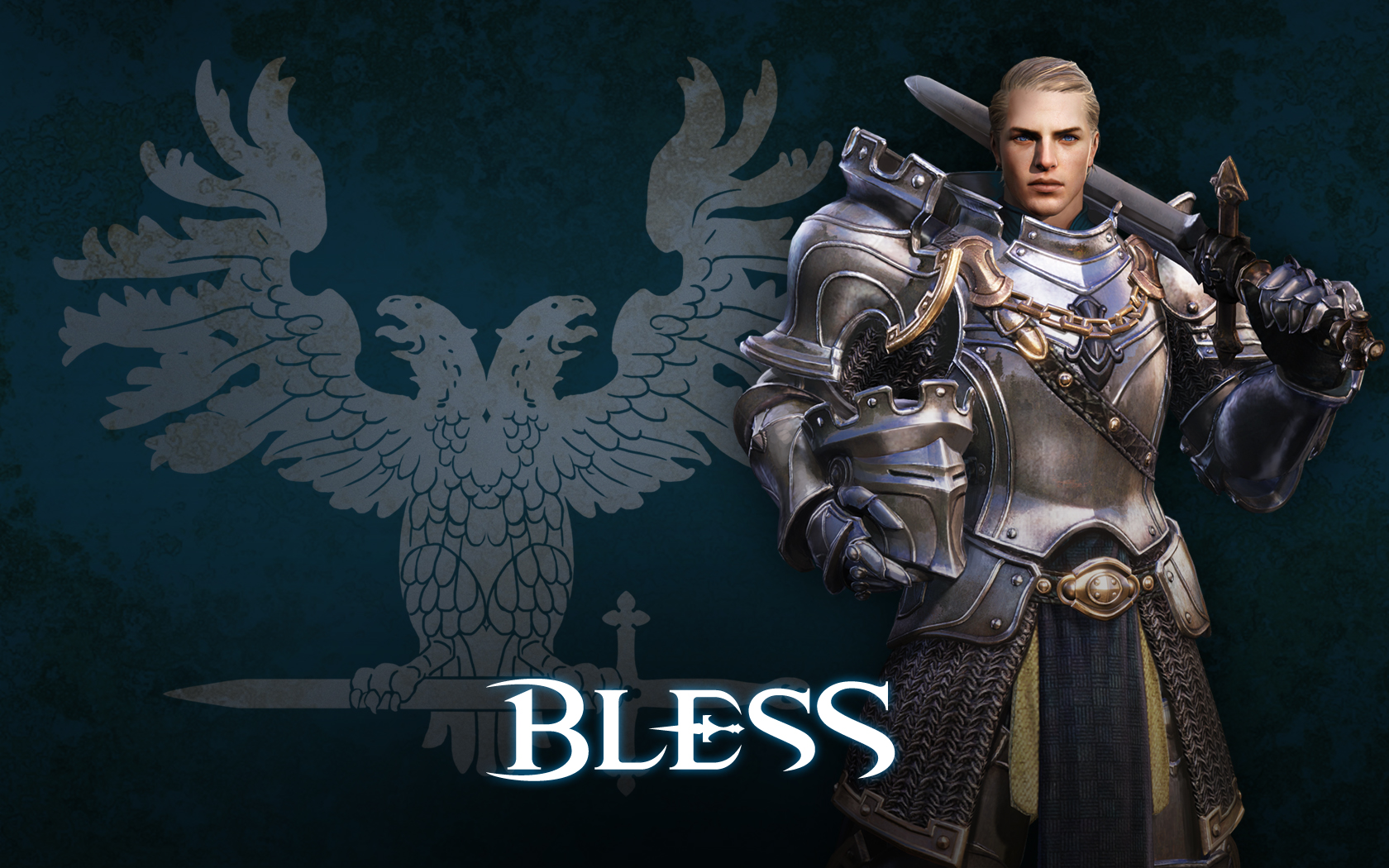 The Habichts are a sect of humanity, based in the northern continent of Bless Online. They are strong-willed, loyal to the Hieron empire, and act as the leaders of the other Hieron races in their goal to unify the world under the Holy Empire. They are a large, hardy folk, tempered by the cold and wild nature of the north. Habichts begin their life in Bless Online in the northern Eltern Village, where they must constantly be wary of an invading orc presence.

The Sylvan Elves are descendants of the ancient Millennial Kingdom, born of the forest and wise as the trees that inhabit it. They are the guardians knowledge and traditions of the old ways. The Sylvan Elves begin the game in El Gradis, the Sylvan Elves’ capital, where they struggled to protect the dying Tree of Life. 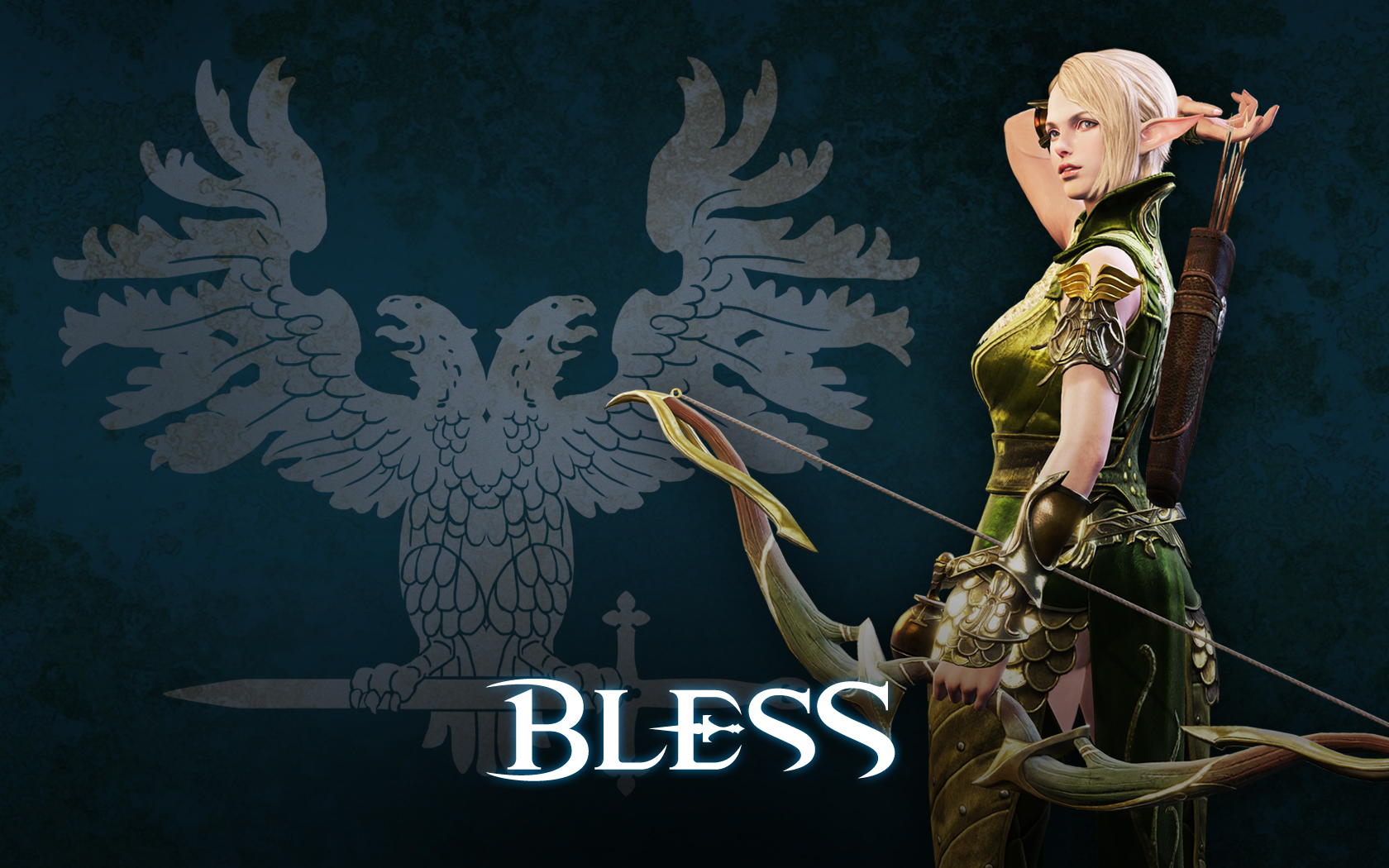 The Lupus are strong and agile forest hunters, and one of the oldest races in the world. Wolf-like in appearance, they are also honorable warriors who value loyalty, discipline, and obedience – all qualities inherent in the Hieron Empire. The Lupus value and love nature, though they have been known to go feral when their ancient wild nature is lured out by attackers or dark magics. The Lupus begin their lives in Ahanu Village, where players must undertake a coming of age ceremony as ancient as the race itself. 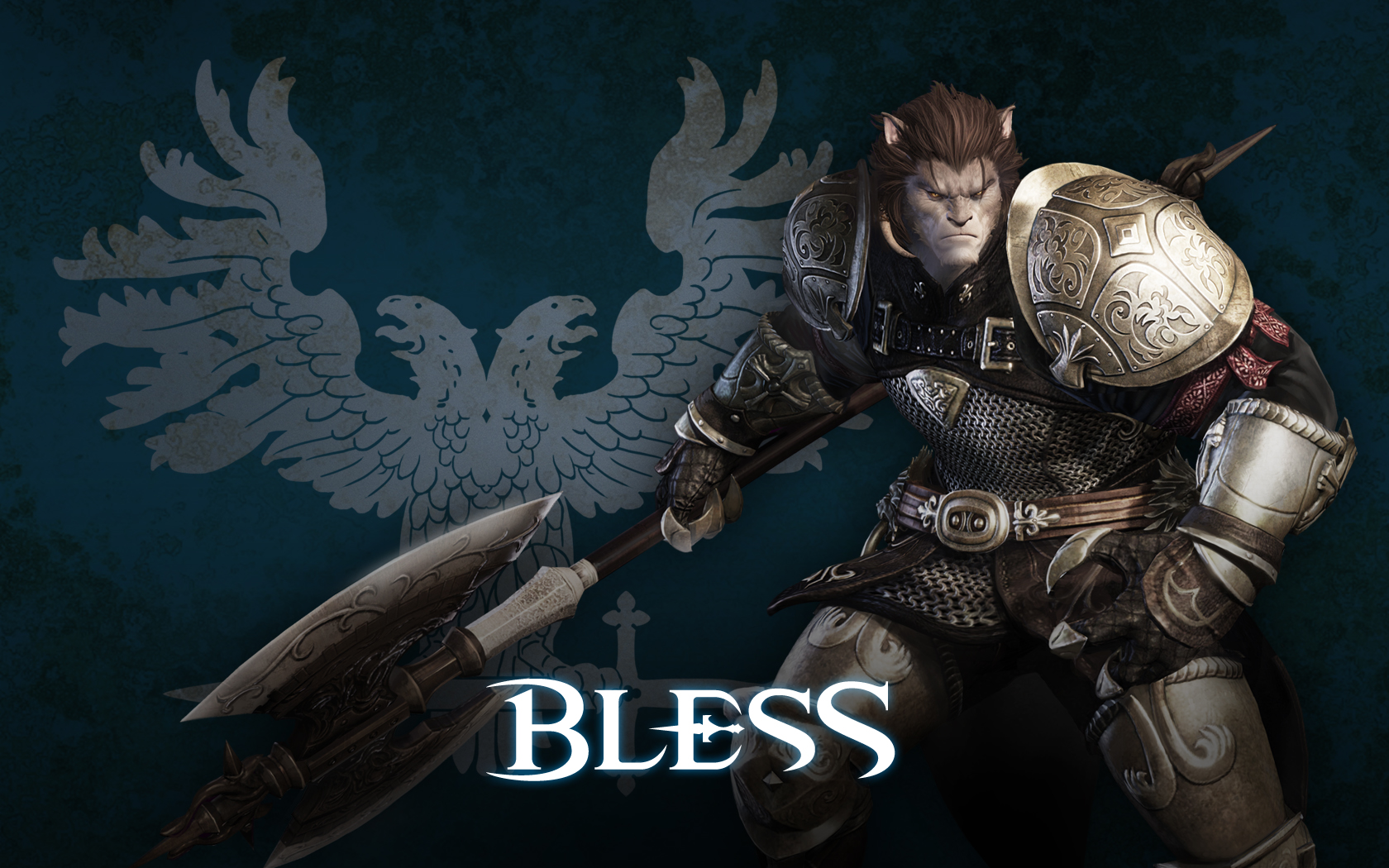 The only “non-partisan” of Bless Online’s seven races, the Mascu are a diminutive race from a far away continent, who wake to find themselves fleeing their homeland and on their way to either the Hieron Empire or the lands of the Union. Over time, some Mascu became members of the Hieron, where they oversee trade and technology for the Holy Empire. 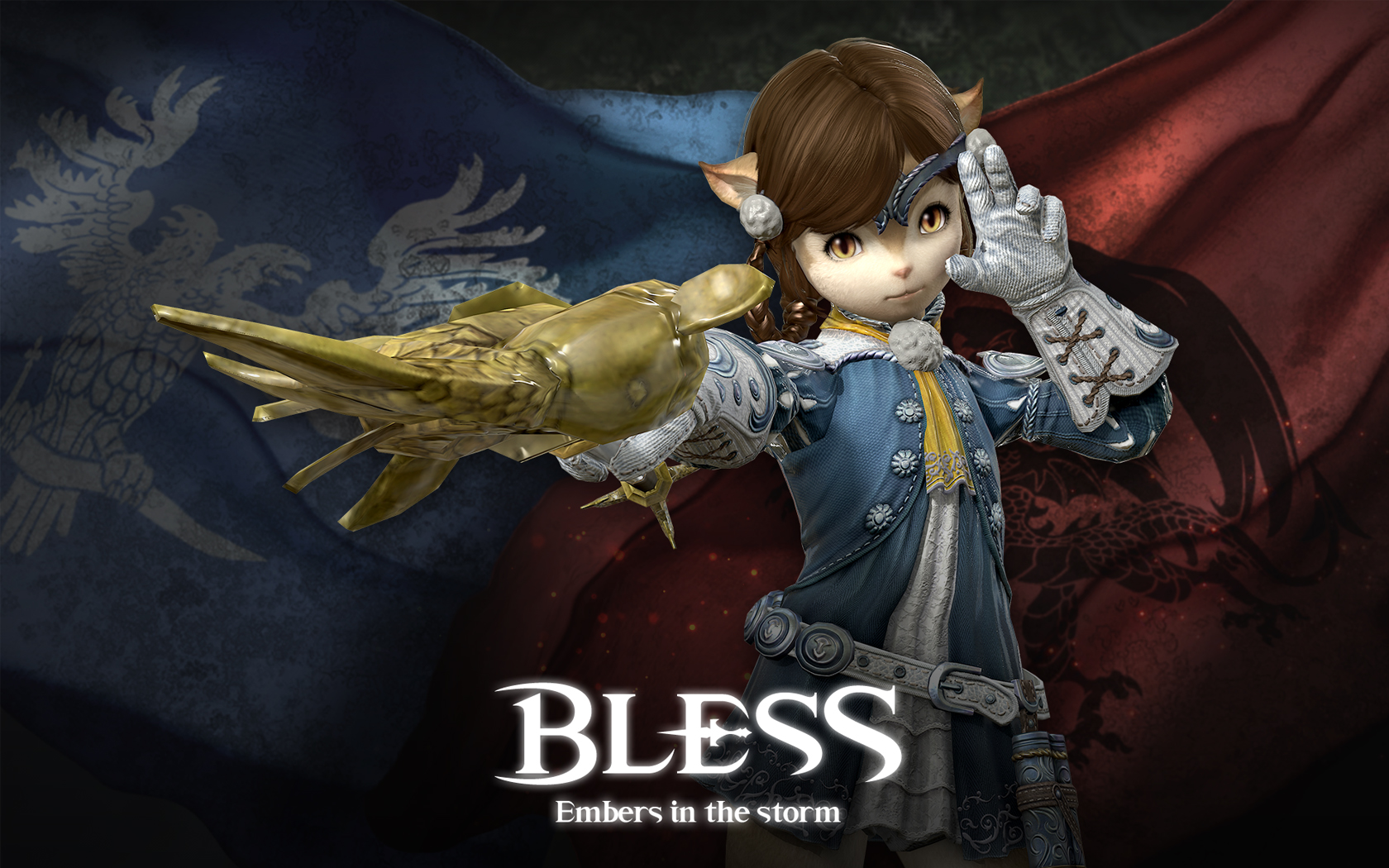 I can’t wait to get my hands on this game. I don’t expect it to be a masterpiece or anything, I just feel it will be a nice, mediocre F2P MMO. I just hope it survives and does as good as it can.

This game probably isn’t going to be F2P. It will likely be either a P2P or Subscription-based model. The developers specifically stated that in order to keep the game up without delving into P2W territory, they were going to look into a payment model. The official fansite even had a vote on what it should be, and B2P with a cosmetic cash shop won the vote with F2P + premium membership options being second.

I am quietly excited, please do not let me down Bless I need a decent new game that excites me again…. lol

If your gameplay lives up to your visuals…happy days :)

stay tuned for the launch of the official website next week

I’m confused – why next week, the website seems to be already up…?

It is really about the forums, the sign up section for streamers, and enticing people away from the steam comment section: kinda hard to get anyone excited for a title when your primary community portal is a toxic shit hole with zero enforceable moderation and a worse mob mentality than Reddit.

I’ve been following this game for a few years now, I’d play it if it had a PVE server. No PVE server? Not interested.

Gross. I didn’t know it was pvp centric. I’m out too then.

I forget exactly off the top of my head but it’s either a two faction pvp system like being on a pvp server on WoW or straight up free for all. But either way, if you go out in the open world, you don’t get to opt out of pvp.

They said there will be some item that will allow people to avoid PvP.

They’ve got furries and little people, I’m sold… at least on races.

I don’t like this new asian MMORPG “style” at all.

Historically I had no problem with asian MMORPGs, but everything that came form asia in the past 3 or 4 years now uses this weird mixture of realism and anime which I can’t stand. And it’s not only the models that always look the same, also they’ve reached a new level of over-sexualization (female character wearing high heels while fighting – really?), the always the same looking overloaded UI…

I think the asian MMORPG market isn’t for me anymore. Bless might be a good game, but everything I’ve seen in the trailer turns me off so much that I happily go back explore the western markets.

I don’t agree, it is that mix of realism and anime style that very much appeals to me and I hugely disagree that this is over sexualised.look to Tera if you want to throw that term at an appropriate target.

The characters in Bless have all been attractive yes, but they have also been proportional and dressed, nothing over sexualised happening here at all.

don’t make me set Peggy on you Al :P

Aw noo please don’t do that to me :P

Western markets don’t have much to offer these days, aside from WoW that refuses to die and pathetic indie projects that will never amount to anything.

I disagree here. While I agree that western markets also produce a lot of garbage, all games that I’ve played and liked in the past years came from “the west” (that’s WoW of cause, but also GW2 and TESO and, even though I’ve not continued to play after finishing the “main story”, SWTOR).

Sure, all these titles are “older”, but if I had to suggest a game to a beginner, I’d definitly say GW2 or TESO before mentioning any asian title.

I really did try a number of asian MMORPGs (TERA, BDO, Echo of Souls, ASTA and most recently Revelation Online… and some other titles whose names I forgot)… and really, even though I really tried, I always found myself going back to the abovementioned WoW/TESO/GW2 group of games.

As you might notice from the post above, tt’s hard for me to find the right words to describe why I don’t’t like the asian titles… it’s not that there’s anything particularly “wrong” with them, I just never managed to like the game as a whole…

You’re missing the point. I’m currently playing TESO, so I don’t hate Western MMOs, I hate both Asian and Western, because they are both bad, but I play both as well.

Asian games aren’t better than Western, they just come out more frequently and even the worst possess higher quality and replay value whereas many indie projects in the West exist for years and never really improve. Like Project Gorgon for example or Rise of Agon, or any of the other titles. Star Citizen will be released by the time the original backers have grandkids and are on their deathbeds and in their wills they tell their grandkids to await the release of Star Citizen.

The ideas behind Western games clicks more with me, but their execution is really sloppy – complicated mechanics that only look complicated, but as soon as you grasp the concepts, you realize how useless and pointless everything in those games is. Asian games don’t even have an idea behind them, they just slap assets and publish “something” that has the most generic story in the world, the most dumbed-down mechanics and flashy graphics and busty chick characters that chodes who will play the game will drool over.

This is the reality, they both suck, but in different ways.

Ah ok now I got your point. Yes, sadly, I agree.

The Mascu are super cute, but it’s disappointing that they don’t have their own homeland, starting village, lore, NPCs, etc. like the others do. :\ I don’t like the nomad thing.

I’m liking the last ones. Do they come in pink varieties? o.O

In the Korean and Japanese version, they have released a non-chipmunky version of the Mascu, so they look like small humans. (although this is mostly just for the players who wanted cute but not fuzzy, most all the NPCs still have the chipmunk look).

I was going to say, they don’t seem as detailed as the other races do, meaning they don’t have visual depth to their features. In their current iteration, they remind me of Lalafel from FFXIV. Lala’s art never seemed to really fit in with the other races, I felt.

Well Chua’s (WildStar) look like chipmunks (to a degree) and come in pink varieties. So do they?

I played korean mmo’s and im done with anything that comes from that region. If they really want people to get hyped about an old game they should show us the lore of the cash shop.

Wouldn’t you prefer the cash shop isn’t a huge focus…?