So yesterday’s latest bit of story in World of Warcraft did not, in fact, delight and amaze fans. Quite the opposite. Reactions on the game’s subreddit have been wildly negative, with dozens of threads popping up about how petulantly destroying a city isn’t morally grey and how badly this mangles existing character traits. A large number of players are unhappy, due in no small part to the fact that the net result is that the Horde have basically been portrayed as complicit in what amounts to a war crime.

All of this mockery is heartily deserved. What is not deserved is personal harassment directed at longtime novelist and member of the writing staff Christie Golden, who was not even involved with writing this (she describes all of these decisions as being made before she formally joined the main writing staff). The game’s subreddit has officially stated that this is unconscionable, which might break from predictions but should show that even unhappy groups of fans aren’t supporting harassment campaigns against women because of bad writing.

On the bright side, some hotfixes should clear up some PvP issues? There’s no hotfixing out the story, though.

All the Warbringer pieces where well into development before I came on board.

Why was her sex mentioned?

Yeah, nevermind that we (Horde) have been killing Night Elves for a very, very long time. I guess it was ok up till this point?

Soooo slaughtering Kaldorei all this time was ok, it was lighting a tree on fire that was the tipping point for you? You were fine with it until then?

I played the quest line for the pre-patch and find it mostly stupid. I honestly don’t care if the horde is considered good or evil. I don’t care if Teldrassil burned. I just want a good reason for whatever is happening and instead it felt like a bad attempt to force a square peg into a round hole. There was nothing compelling about any of it. Nothing that made me understand or agree with why things are playing out as they are. Its just a poor plot device created to justify a whole new expansion.

So as someone whose played WoW for maybe 6 months 13 years ago let me see if I’m understanding this.

People are pissed because Horde is seen as the “evil” side, intent of doing evil things including to the Alliance race? Soo it’s similar to when things were like

When there were raids on each of the main cities and people would gank npcs as a “battle of Horde V. Alliance”

And with a recent expansion, the Horde and Alliance are now buddy buddy? This is the part I’m confused with because the Alliance were ALWAYS the “goodies” race while the Horde was the “Evil” races, and now there’s lore that points to the Horde being evil again because the lone (or class) antagonist/protagonist is trying to push the Horde to murder the Alliance?

No matter there are evil intentions on both sides. Jaina and others will not embrace the horde. So you are looking at genocidal maniacs on both sides.

Sylvanas is one of the most consistent characters in Warcraft. Community reaction: Bad writing because we didn’t get a twist and dont want the horde to be bad! from wow

Here’s a good post that explains why Blizzard has been consistent with Sylvanas’s character.

Evil isn’t the issue, “dumb for the sake of the plot” is.

Her plan was working flawlessly up until the very last quest where she… i guess “forgot” to kill Malfurion, and burned her own bargaining chip, because the plot demanded those things happen. It’s like a Bond villain putting him in this overly complex and easily escapable “death trap” and leaving the room rather than shooting him in the face as any sane person would.

And what’s frustrating a lot of players is that both plot points could have been hit in a far better way without relying on Sylvanas being stupid. Have Mrs. Malf show up 30 seconds earlier and port him away, robbing Sylvanas of her prize, then have the Night Elves themselves spark the tree after the horde invaded to decimate their army trapped inside. Boom, Malfurion lives, the tree burns, Sylvanas isn’t an idiot for the sake of the plot.

^ This. Noone would have cared if she was just like “I hate alliance and want to turn them into an undead army or burn them.” Did you see anyone complaining about the quests in Cataclysm? No. Because the story made sense.

This particular twist to her plan, lazy and rushed.

For the record, I am all for burning elves. We should have just started with that plan.

The “Should The Horde = Evil Yes or No?” was raised as a side issue. but the main issue remains that the plot veers into absurdity in several ways as a heavy-handed means of getting the two factions to go to war with one another yet again.

All stories begin with a blank monitor screen, or a blank sheet of paper. If it was decided on high at Blizzard that they wanted the two factions to become enemies yet again, there were a number of ways to craft the fiction so that things would move there in a way which made sense within the story of the world.

The main issue now is that the plot-path they chose to create really doesn’t make much sense upon close examination, and yet it drags the players headlong into the absurdity and gives them little say in how their characters respond to the situation.

I thought BFA was going to be a below average expansion and was still happy to play. Somehow Blizzard managed to still disappoint me. I have never been a Sylvanas fangirl. I have never been super upset with bad storytelling. But how many MMO’s force half the player base to commit genocide, and expect them to find it fun! Normally WOW does have a lot of gray stories if you read the quest. I just don’t see how this expansion’s story can be salvaged, without sacrificing an Alliance leader (by making them do something worse than Teldrassil) to make the story gray again. Most Horde players want to be gray heroes not following pure evil blindly. To make matters worst the Alliance players are so mad at the Horde players (for Blizzards writing) Horde players can’t complete quests with Warmode on (which is ruining the world PVP aspect of this expansion). Also if too many people move to the Alliance it messes up battlegrounds by not having enough Horde players. I have never seen an MMO make a writing decision that was going to negatively affect gameplay so directly. Ps. I play Horde and Alliance. 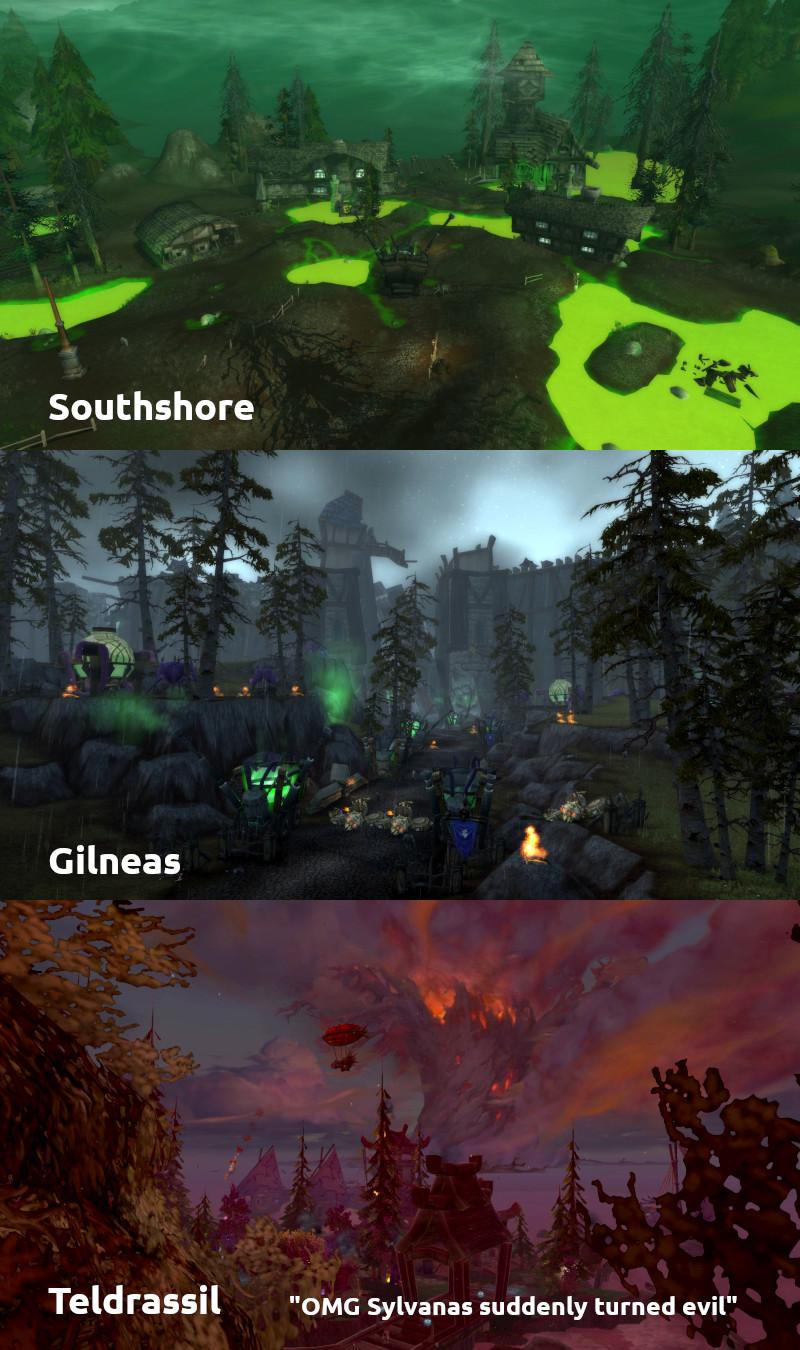 Personally, I like the Southshore one where your Horde characters had to rescue humans that have been planted as a crop for some nefarious purpose by a rogue faction of Undercity…

…though I am not sure that’s the reason why you are posting those. o.O

Well the point is that Sylvanas has been doing stuff to innocents far before the whole burning of Teldrassil thing. Even back in Vanilla she was having the Royal Apothecary Society work on a New Plague (which then becomes featured in WotLK and onward) to which level 6 newbies would go about helping them gather materials for and then test on live victims.

people aren’t complaining that she’s evil (At least, they shouldn’t), they are upset that her decisions in the last quest are dumb for no reason other than hitting predetermined plot points.

I’m glad Christie Golden wasn’t involved in writing this particular pile of hot garbage, but I still don’t think things are going to get better since the issue is most likely not to do with the writing team at all in the first place.

And yet again, gamers need to chill the hell out. Know where to draw the line. Blizzard made WoW’s story suck; they didn’t come to your house and kick your dog. I’m happy to see that this particular gaming subreddit doesn’t condone harassment though.

So what is it I am missing, because my experience with WOW is just standard basic MMO quest grinding with no cinematics, no character storylines other than my own and whatever text script the NPC’s give me, nothing about factions, horde alliance or otherwise. Is it because I am not playing whatever the most current expansion is? Have I just missed the boat on all this epic storyline content that everyone is always talking about? Am I too low a level? (30’s), What is it? Don’t get me wrong I enjoy the game for what I am experiencing but not enough to maintain $15 every month when I keep hearing about great stuff that I never see any sign of.

You’re too low. I was about 45 when I stopped and didn’t see it either, but I created a lvl 100 “trial” character to see the start of Legion and the presentation was much snazzier.

actually, after some digging, found a breakdown of what character levels deal in what expansions. So that was pretty helpful in letting me figure some of this dilemma out

Depends on when you played, there were more cohesive storylines when they revamped the old world with Cataclysm. Most expansions since WOTLK have been pretty story driven.

Yea, the new expansion story only ever applies to the latest levels. If you’re sticking to the free trial, you’ll never see story past some of cataclysm.

Fortunately, you don’t really need to subscribe if you’re only curious about the story. There are several books and comics you can buy. If spending money isn’t your thing, there is always youtube and the Wiki.

actually, after some digging, found a breakdown of what character levels deal in what expansions. So that was pretty helpful in letting me figure some of this dilemma out

Star Citizen fixes a currency bug, confirms that alpha 3.15 will...