END_OF_DOCUMENT_TOKEN_TO_BE_REPLACED
Patch 4.36 sure seems as if it’s has been dragged out. Realistically, that’s not what has happened at all; the time between patches has remained pretty consistent, and with the next big Final Fantasy XIV patch planned for September this is just about the right time. But something about 4.36 having big content just makes the whole thing feel overextended, as if we’ve been sitting and spinning our wheels for an extended time however untrue that may be.

My big plan for this week was to try out the Monster Hunter World crossover because I was honestly less interested in Pagos. (Yes, I like the idea behind Eureka, but there are only so many hours in the day.) I honestly found the experience a bit… not bad, necessarily, but just underwhelming. It was neutral. And I think some of it comes down to how the game has been increasingly handling its crossovers and whether or not those are, well, good things or less-good things. 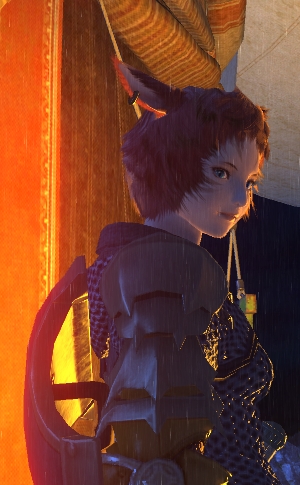 There’s been a policy in FFXIV pretty much since the beginning that has affected more or less every crossover, and we’ve had several so far. To wit, crossovers aren’t just a matter of ignoring the laws of reality for one event. Any crossovers that happen, well, happen. They have to make sense within the laws of the universe and/or the universe being crossed over with.

And we have had quite a few of them now. There has been Dragon Quest X, GARO, Yo-Kai Watch, Monster Hunter World, Final Fantasy XIII, and two separate Final Fantasy XI crossovers. That’s not counting things like the ongoing Ivalice series that’s chock-full of imports from Final Fantasy Tactics and Final Fantasy XII, since those aren’t crossover events but interwoven lore.

However, as a lot of people have noted, there are some weird exclusions from that list. Final Fantasy XV isn’t something I care about, but it’s still unusual that we haven’t seen a single crossover with the title (and now likely won’t). With the same character designer working on both games, the lack of NieR: Automata is a keenly felt omission. Heck, we never even got the reciprocal crossover elements from Phantasy Star Online 2 that we were promised were, in fact, going to be a thing.

The point here is that there is some… weirdness with FFXIV and crossovers beyond the stated policies. But some of that is clearer as you look at the more recent crossovers. It’s no longer enough for it just to make sense within the world; these days, it tends to be more about making sense within the context of content itself.

The GARO crossover was linked completely with PvP. I freely admit that I know pretty much nothing about the series, but that doesn’t seem to have a whole heck of a lot to connect the two. Yo-Kai Watch was at least trying to replicate the effect of capturing the various spirits that make up the bulk of the game. MHW is now all about having a similar arena confrontation with a giant beast, to the extent that FFXIV can replicate that experience.

Some of the choices made rub me the wrong way immediately. I really don’t like that there are two completely different armor sets for both genders, and neither one of them actually resemble the typical Rathalos set very much (thank you to friends of mine more familiar with the franchise than I, this is useful information). This is a bad habit that the game should have grown out of by now, especially when people have routinely gotten annoyed about it. 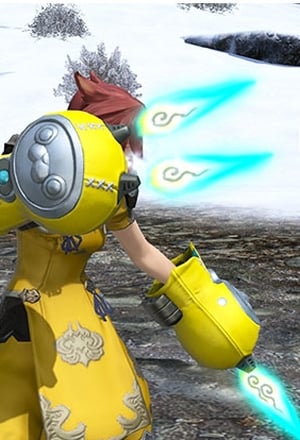 However, the actual fight itself is up to the usual standards of FFXIV. It just works in a very different fashion from what players are used to, although not as much as you might think; we’ve had bosses with no aggro tables often enough that the concepts feel familiar now.

Given all of this, it seems like increasingly the goal with these crossover events isn’t just to cross over with a property, it’s to provide players with some new context for this crossover. To do something unfamiliar and different with the game’s setup, try something on to see if people like it as much. The Rathalos fight is, by itself, a perfectly functional trial that doesn’t actually require the crossover to work within the game.

On the bright side, yes, this does help preserve the integrity of the world. Things like Rathalos, Palicos, and so forth… they aren’t being added to Eorzea. This is just part of Eorzea, from a corner we’re likely never going to explore in any further depth.

The down side is that it also removes some of the fun of the event and what crossovers can do, and I think that’s a bigger loss. Instead of just a fun matter of derping about and then getting various bits of cosmetic gear, we have a trial you’ll need to run repeatedly in both standard and challenging modes to successfully get everything.

This is some of the same problem that we had with the first crossover event with Lightning Returns; the event had escalating requirements for levels that locked out many players, and there was a limited time to complete it. The team seems to have learned from that, but honestly that feels like one that got the depth right! You didn’t need to accomplish much in the game to take part in the event other than leveling; it wasn’t a challenge, it was a fun chance to cross over with another game.

The Rathalos fight is fun and requires some decent situational awareness, but given the paucity of rewards I’m interested in and their gender-locked nature, it’s not something I’m really inclined to run over and over. And since it’s going to be there forever, there’s no time limit on it. I don’t feel the need to rush in, I can take forever if I want to. Instead of bringing the two together, it kind of fizzles out as just “oh, a new trial with different reward mechanics.”

Is this a good method for providing rewards for trial battles? Absolutely yes. I’d love to see this applied for normal trials in general, and in that regard it’s a complete success. But in the context of a crossover, it’s kind of whatever.

Feedback, as always, is welcome in the comments below or via mail to eliot@massivelyop.com. Next week, I’d like to talk a little bit about the game’s weekly limits; as we move forward in the game, which ones still work and which ones might be best removed?

I think it might be a little early to count out FF15 and Nier:Automata. The easiest reason I see that we haven’t really dealt with those two series yet is because the areas we have been to aren’t… developed, so to speak… Somewhere where technology is sufficiently advanced enough to have us interacting with either magically royal boy-band tour de force and their equally technologically magical flying car… Or Automatons that are perfectly able to replicate human emotion (for lack of spoilers).

And the next expansion location teased…? Well… I’d imagine Garland would be the perfect place to team up with some upstart prince and get ourselves a fancy vehicle mount as a result. Even if we don’t head there directly, the way the story is priming us to run into actual conflict with the Garlean Empire proper means we just might find a group of four well-dressed boys by a broken down vehicle about to be besieged by Garlean Magitek armor and their soldiers.

And with Automata? If there isn’t an easy squeeze into the Garland empire, the next best bet would be an expansion that has us dealing with the Allagan Empire and their tech. They have the tools to create clones, and as we’ve known their technology, to quote the game, makes the Garlean’s current advancements childsplay in comparison.
And considering again that they deal with clones…? Well… That makes me believe they could work in not just Automata but the Nier series as a whole! And I’d kill to have my very own Liam-O’Brien-book minion to float around with me.

Also… I will pay like $60 on this event just to get the music from the Niers series in FF14. No joke.

Pantheon: Rise of the Fallen shows off the Shaman and discusses...

Ultima Online’s next update will feature an overhaul to its quest...