As a franchise, The Walking Dead is probably past its prime, but I’m admittedly still a bit of a fan. In fact, I was playing The Walking Dead: Our World around release, though real life quickly got in the way. I know we briefly mentioned the game having MMO inspirations before, but as someone who played the game for a bit and actively tried to be part of a few communities, I might be able to shed some light where many don’t seem to be: covering the MMO features that hopefully inspire ARG competitors to up their game.

Now, before we start, let me say that none of these features is exactly unique, especially for MMO fans. In fact, I’ve previously suggested feasible MMO-to-mobile features in the past when spit-balling how other IPs could get in on the Go action. Mobile vets will get that “I’ve seen that in X mobile title before!” feeling, but what’s nice about Our World is that it combines many of these features into the same ARG. I hate saying it, but the biggest thing that may be stopping Our World from being a top contender is the IP, but I’ll leave that for other people to discuss. Instead, let’s jump into what features make the game appealing. 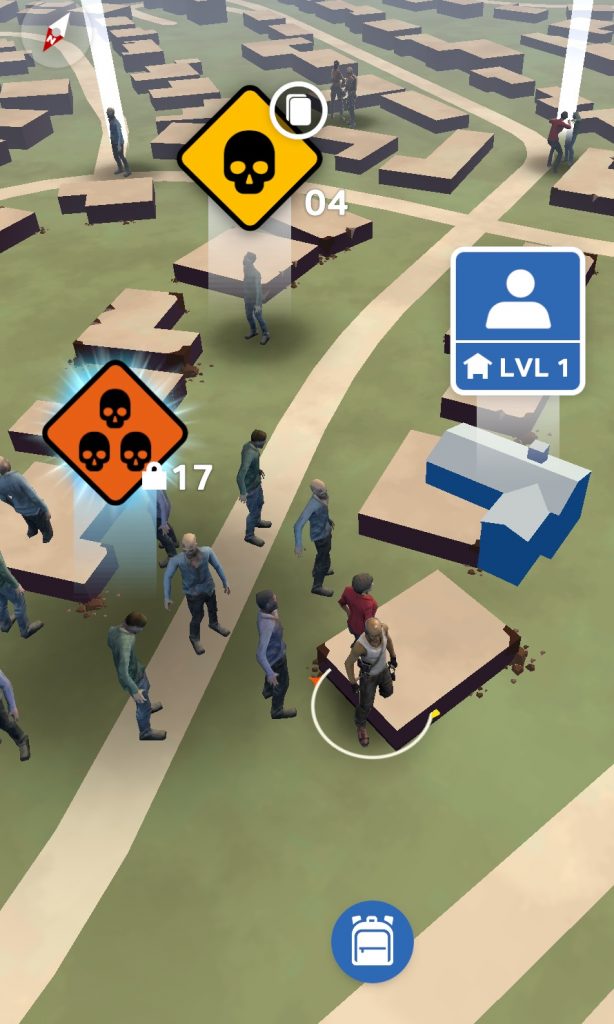 One of the main features in Our World is building various kinds of buildings. No, it’s not Wildstar style player housing, but it’s still player-made. You can actually make your house a shelter and have friends drop off survivors to gain rewards. You’re not limited to a single building either! You can make your house a shelter and your favorite place to eat with friends could be a trading post where you all work to gain in-game currency.

As in many MMOs, building does have some limitations; for example, you can’t build your house on someone else’s house or stack all the important building types on each other so you never have to leave your real life home to save the virtual world, but there’s enough freedom for it to be interesting. That being said, if you are homebound, there is some good news: game supported “spoofing.”

Especially for people who play Niantic games, we know that there are times when we wish we could go help our friends without having to literally drive/fly to them in real life. Maybe they need another person for a raid, or maybe their base is being attacked and they need help, or maybe they found something totally cool and want us to get in on the action.

Well, you can in Our World. “Flares” are an item you can set down, allowing guildmates to teleport to your approximate GPS location (i.e., you need to be standing by your local cafe if you want guildies to be able to teleport there in game). They even get an app notification when it happens!

Fast travel is generally just “spoofing” in other games, where players abuse GPS systems into thinking their character is somewhere they physically are not. It’s a tough thing to combat, so building it into the game takes advantage of the technical possibilities but hopefully, by tying to it a proper in-game system, developers have another method of checking whether or not a player is actually abiding by the game limitations. It’s fun, it’s social, and possibly can help devs find cheaters a bit easier. Everyone wins!

So yes, I mentioned in the flares section that the game has guilds. It doesn’t sound like much, but it’s everything in an MMOARG because guild dynamics change when you have to see each other around town, especially if PvP is involved.

People who have read my past articles, especially on PvP, know that I prefer player-made factions to dev-created factions. When things get tense or griefy in the virtual world, you can call for guild support, switch to your main/alt, ignore people, log out, gkick them, switch servers…  Things that you can’t really do (easily) in meatspace.

It’s not just about PvP, though. Making your own factions means it’s easier to make sure your friends didn’t join the wrong side, you can more easily make truces, break away from griefers, etc.

Like any mobile app with social features (and many other multiplayer games), guilds do have quests that can largely be done solo but have absurd farming / grinding requirements. It’s not terribly creative, but it does give people a reason to work as a group. Besides, real life is kind of like that. Sure, I can build a pyramid solo if I really wanted to, but it’ll be a lot faster if I get my friends to help.

This pairs well with not just the flare system and housing system, but also with the ability to name guilds, create guild emblems, descriptions, and chat (which is thankfully limited to guilds only). It’s almost like a game company knows how players traditionally organize themselves in a game-world! 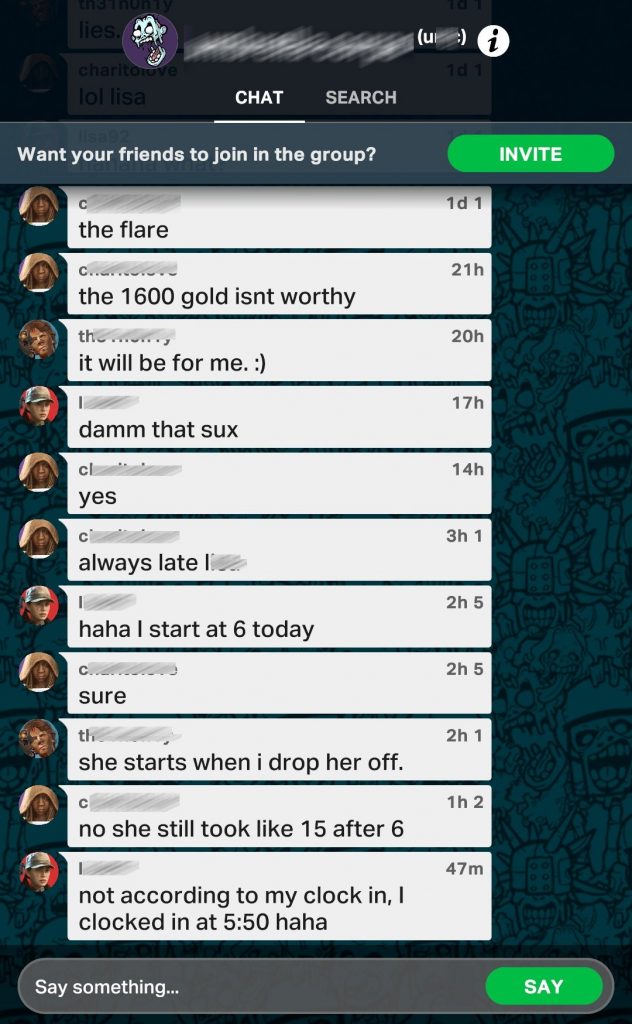 I know some people think chat is overrated in the mic/headset era, but I don’t want to be the jerk jabbering away to people who aren’t visible while riding the bus. I also hate having to switch through multiple chat services to not only talk to my in-game friends but find fellow players. It’s hard to believe a game is multiplayer if I have to use external tools just to find my community!

I know, some people may be rolling their eyes right now, but as someone who keeps jumping into mobile games, I feel like the lack of chat in “multiplayer” games is, well, lonely. It makes it hard to tell when I’m playing with/against a player or if I’m just with a bot. No offense to any of our AI readers out there (psst, I’m on your side!), but I really do need to bond with my fellow meat bags (see guys, I’m still on your side!).

By limiting chat to guilds, you solve a lot of problems. You get to select who hears what you say, who you hear, and you hopefully are in a group with people you can physically talk to and work things out with if things get out of hand. Your friends can also bring some of their friends in too, increasing your potential social circles. And if you can’t see any locals, you can search for local guilds!

This has become another no-brainer for most MMOs, but it’s even more important when you don’t have open chat and can’t see other players characters in game. While Pokemon Go fans often are easy to spot, weaker IPs kind of blend in with normal phone users, unless the player is doing something weird, and you don’t want to be noticed for that.

It’s also nice for rural players who probably wouldn’t be able to group up any other way. I know there are Walking Dead fans around my neighborhood, but few are also gamers or willing to devote time to an(other) MMO.

I know people can use social media and forums to find groups like in the old days, but remember that those people are more invested in their gaming ,and MMOs need casuals to help fill out their worlds. This is especially true of MMOARGs, even with fast travel options.

It’s not perfect, though. Being able to join multiple guilds would be nice, as would forming alliances for extended chat, but considering all the other real MMO social features, this is pretty good. 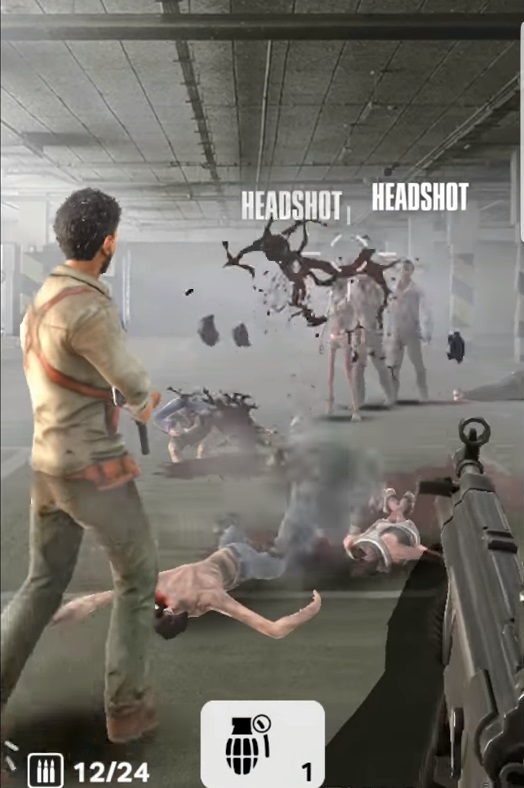 There’s a lot to like about The Walking Dead: Our World. Beyond the above features, there’s enough going on around the game world that even in my house, a Niantic AR desert, has enough to keep me entertained for 15-45 minutes, without leaving home or using fast travel.

The monetization, like ar ARGs, is gambley and pay to win, but as I’m physically alone in the virtual zombie apocalypse, my interactions with others have been limited to chat and flares as I grind boring quests with simple touch-screen shooting. That’s actually better than my time spent in Ingress, and even stretches of time in Pokemon Go during my first year back from Japan in 2016.

While the game didn’t make POGO’s splash, I feel The Walking Dead: Our World is more solidly built. It gives me hope that future MMOARGs (or current ones keeping tabs on the competition) can make mobile games that take advantage of the platform and still appeal to MMO gamers in terms of social dynamic possibilities. I can’t speak for everyone, but it was the idea of sharing a virtual space with other people that really appealed to me when I played my first MMO, and sharing a virtual space with people I can physically see only enhances that. We just need titles that can juggle both ideas, and many of Our World’s features feel like the bare basics of what the genre needs.