The Elder Scrolls Online community event in Seattle at this year’s PAX West was one of many firsts for me. For one, this was the first time I’d ever been personally invited out for a press event. It was also the first time I’d ever interviewed a big-name dev in person. But one thing I didn’t expect from this experience was legitimately getting lost in a game world again. It’s been so long, it legit felt like the first time I’ve played an MMO again.

END_OF_DOCUMENT_TOKEN_TO_BE_REPLACED
Taking place in the cozy First & Bell in Seattle, the community event featured computers running an early build of the Dragonhold DLC. When I hopped on for my demo, I picked a Warden, the class added back with 2017’s Morrowind chapter. He seemed like a pretty awesome character to use, wielding two swords and riding what I can only describe as a “ferocious fiery battle cat,” so I set out to explore Dragonhold and Southern Elsweyr. 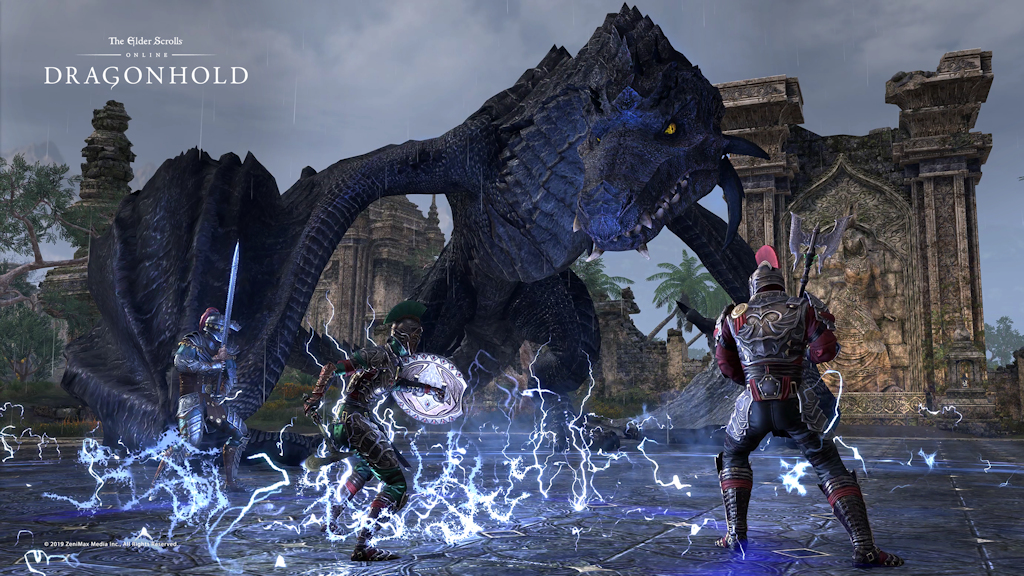 One of the more notable things ESO is infamous for its lack of a minimap, though of course on your own machine you can mod one in. In my clean demo, that was a little jarring at first, but I soon recognized the benefit of actually not having that minimap. I was told that it was explicitly designed so that people are actually focusing on the game and not the UI. I personally love this decision. I tend to minimize the UI as much as possible in any MMO I play, so having an explicit developer decision remove the minimap to me shows how much they’re dedicated to the immersion factor.

Staring at a minimap wasn’t the only habit I needed to squash. I have a tendency to run around and mindlessly swing my weapon while in town. I soon realized that doing that can hurt the innocent NPCs around me and get me into trouble with the law. I accidentally sliced a merchant in the throat, and we were suddenly throwing down in a brawl. I had to kill the guy; it was self defense. The city guard saw the opposite. He demanded money from me, but I wasn’t about to waste my money on a crime I’m unwilling to take responsibility on, so I told him that he’ll never take me alive and ran. I couldn’t escape though; roots quickly sprang from the ground and I was eliminated with extreme prejudice.

When I came back, I did some light questing, checking out the available main story quests. That’s when I realized what long-time ESO vets already know: that the entire game has lines and lines and lines of spoken dialogue. Since I was poking around the early alpha of the area in Dragonhold, none of the lines have been recorded yet, so a text-to-speech voice would recite the lines at me. This blew me away: There are plenty of MMOs with voice dialogue, but ESO, even its DLC, has voiced lines for everything.

And it really worked for me. Even with the robotic, pre-alpha voice acting and the occasional animation hiccup, I forgot where I was for a second. As soon as I saw a dragon fly overhead, I heard the other testers say, “Let’s get that dragon!” So of course I dropped what I was doing, forgot I had an article to research and write, and commenced dragon-hunting with my impromptu companions. It landed in a clearing where a few players soon flooded in. I was immediately roasted by the dragon. It was on at that point. I went full-on try-hard on this dragon. Even though I didn’t understand the game as well as the hardcore ESO fans at the event, I knew when it was time to throw down. My group and I attempted to fight it off, casting off spells and strategically letting off charged attacks, but it wasn’t enough. The dragon still took us down, over, and over, and over again. Alas, we were forced to retreat.

At that point, my time with the game was up, and it was only then that I realized I was playing an MMO. I wasn’t just a reporter preparing for a write-up in a Seattle pub; I was a Warden with a battlecat, trying to take down a dragon in Tamriel. That immersion is certainly ESO’s greatest strength, and from what I saw with Dragonhold, I think it’s a good time to try the game out and prepare for it!

Massively Overpowered was on the ground in Seattle for PAX West 2019, bringing you expert MMO coverage on everything (and everyone!) on display at the latest Penny Arcade Expo!

Yes it’s one crazy immersive game. That is why I keep playing it even though I feel the combat has become too easy in general since One Tamriel.

The way this thing makes you feel immersed into the world and the stories it tells, the stuff going on, the chatter you hear as you go around from both NPCs and even enemy groups in the wilderness. There isn’t a single line of speech that isn’t spoken. The game is something else.

If you are into playing stories this is where you should be. You even get actual choices here and there (though I wish there were more of them) that can have small effects on your version of the world.

There are times where you will have to choose one of two leaders for a group, and then you will see that leader in your version of the world. Or you have to choose someone to die out of multiple people, and then later on whichever of the two you let live ends up joining you in certain other quests, because they’re still alive in the world.

Little touches like this that just aren’t in most MMORPGs.

The things I learned about the Dragonhold DLC from this article:

1. The voice lines haven’t been recorded.
2. I guess I should check out the First & Bell the next time I’m in Seattle
3. Dragonhold did not add a mini-map to the game

I know you’re sort of making a funny post and all but I am going to make a serious reply anyway :P

ESO won’t add a mini map, and doesn’t need one. If you do want one you can mod one in, though I sort of wish that wasn’t a legal thing.

If people tried to get used to the experience without it, it’s quite enjoyable the way they’ve decided to do it here. I can’t imagine playing ESO with a mini-map taking up space on my screen. It’s not the type of game that even needs one.

You learn your way around by sight, it’s about discovery about what is around you. It’s about this clean UI where elements aren’t getting in the way. Though you can toggle this off, even the combat icons are set to vanish when you’re not in combat.

The game isn’t designed to need a mini-map, your compass shows things of interest near you anyway. You peek at your actual map of the areas that are hand-drawn, as if you were looking at a map someone actually drew. Other people around you see your character looking at a map.

The game is more immersive than most and having a constant floating radar mini-map would sort of spoil part of that immersion.

I haven’t played Skyrim, but if I’m reading things correctly it’s the same way that they decided to do thing sin Skyrim.

I hope they never spoil the experience by adding in a mini-map. Even though if you really want one you are allowed to use the mod that adds one.

“I was told that it was explicitly designed so that people are actually focusing on the game and not the UI.”

It’s one of the many ideas I love about ESO. Much like WoW, the game is so mod friendly that you can decide how much and where you want your interface to look. Everything is scalable, transparency and color palatte editable so it’s really a minimalists, vice versa an information nerd’s dream. I couldn’t play ESO without mods going forward.

Appreciating that this was a demo, I’ll never understand why reviewers are always so down on Elder Scrolls voice acting. I’m not sure any of these people would know immersive voice acting if it walked up and shot them in the knee with an arrow. It’s like the people who complain about Shakespearean actors speaking in Victorian English accents: oh yeah? Well I have heard a historical re-enactment of an Elizabethan accent, and it’s positively incomprehensible by modern standards. So leave the ES voice actors alone: they’re obviously doing something right.

The Stream Team: Sidetracked in SWTOR

Dark Age of Camelot is celebrating the harvest for Thanksgiving this...