Do you know what I have been missing in my life? Baby dinos. I really miss getting to raise baby dinos. But thanks to RuneScape, that can be a reality again! RuneFest 2019 had many announcements for the MMORPG, not the least of which was the upcoming scaly husbandry option. While not exactly a surprise to fans (Jagex leaked it earlier), the new archaeology skill was also showcased — another feature I am quite interested in. Fans also got to hear about new questlines, new pets, an Elder God Wars dungeon, increased skill caps, and more. The free-to-play cap is also raising to 20 so players can get to and experience the first archaeological dig site!

Before taking the stage in full costume (you simply must watch the intro movie that kicked off the keynote; we’ve embeddedit below), I got to hear Lead Designer David Osborne share details about the incoming content for RuneScape. This sounds like an update made for me!

A look at archaeology

Having been part of local archaeology team and working at a dig site one summer, I knew the new archaeology skill would call out to me. The first new skill in four years, archaeology becomes the 28th skill that players can skill up. And it is coming to the game in January 2020.

Unlike most other skills in the game, however, archaeology is a multifaceted. It combines gathering and manufacturing, allowing players to both collect stuff and make stuff.

What else can you do with the materials and artifacts? They are fully tradable, so they can be marketed or swapped to others. But there are other options, Osborne explained.

“One of the things that I love about it is the sorting element. You get so much stuff from the ground, what do you do with it? Do you hand it to your excavation team who work offline for you to make these better? Do you hand it to a museum, and get cronotes that you can then spend on things from that museum? Or do you hand it to collectors, some of our most iconic characters in our game (wise old man, etc.), who’ll give you huge rewards for doing so?”

Exploring these five new excavation sites can lead to uncovering weapons as well as relics; even lost knowledge about demon pacts can be unearthed. Osborne explained that not only are the dig sites something to go to to skill on, but they are all about the lost stories, puzzles to figure out, and traps to overcome. Each dig site has a central mystery to solve.

Where can you find these sites? The first one you encounter is Kharid-Et. The next, opening at level 20, is the lighthouse Everlight, situated in Morytania. (The vampyres really don’t want it shining anymore.) The Infernal Source appears third in the archaeology line. Two more will be coming later: Stormguard Citadel (which Osborne teased is up in the sky) and Warforge!

If archaeology isn’t sounding tempting enough, check out some of the rewards. With uncovered lost knowledge of the past, players could make new the items. There’s the ability to bind demonic slayer creatures to you as familiars with Ancient Summoning, creating ancient gizmos to use the new perks, a tradeable XP capacitor that doubles item experience on invention items, and more. There is also a skilling pet, a cute little child mummy named Archie.

The biggest rewards are the relics. Osborne describe them as “a new benefit that is so, so powerful that the player can only have one activated at any one time.” How powerful? He gave an example of being able to teleport anywhere in the game at no cost.

Although archaeology will launch in January, Osborne noted much more will be added to it over the course of the year, including more dig sites (the Orthen dig site will even shed light on how The Land Out of Time came to get where it is now). Any player can come in and do archaeology (which is great news for me!). Jagex is expanding the free-to-play cap from level five to level 20. “We want to give free players more of a chance to really get to grips with this and see what the joy if it is,” Osborne said. 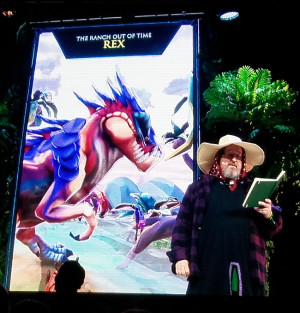 Bring on the dino babies (and potions)

On the subject of The Land Out of Time, earlier this summer RS launched this as a new island for players to explore and adventure on, full of dinosaurs to flight and farm materials from. But wouldn’t it be easier to farm something on, oh, I dunno, a farm? And who wouldn’t want her own cute, cuddly carnivore for keeps? Luckily, RuneScape has a system in place for farming and raising animals, and now, it is expanding to include baby dinos! This Ranch Out of Time will allow players breed dinos and raise the babies of their own, plus grow new plants. Products from this farm will be used in powerful new potions!

Not sure how much you want these new potions? Well, if you don’t care a whit about having new power burst potions that give you phenomenal power for a short time, new potion bombs, or new extreme poison potions, I guess it won’t really appeal to you. But if you do, you’ll want to take part in the farm and practice some herblore.

As just noted, the herblore skill comes into play with the new dino farm. And as you’d expect, farming is also crucial. With farming comes a remote farming machine that will allow players to manage their farm plots form all over the world from one central location, and bloodwood trees you can grow.

Because these skills are already filled with other things, Jagex needed to make room for the new dino farm parts, so both skill caps will be raised to accommodate the additional stuff The Ranch Out of Time system brings. Players will be able to increase these two skills to 120.  Because they are intertwined with the dino farm, the increase in skill caps for farming and herblore will happen at the same time that the ranch launches in January.

Osborne explained that players are requesting more quantity of content, so the studio is creating a set number of sub teams that will be working on fast and quick updates. One of those teams is working on new quests regularly; another is dedicated to reworking the existing game and enhancing what is already there by adding new stories, upgrades, etc.

Regarding upcoming quests, Osborne explained that the game is deep in a story season and things are now ramping up, setting the scene of the sleeping elder gods who are close to waking and likely obliterating life on the planet. Desperate Measures is the next questline in that story series, following Desperate Times. In this next step, players take the fight to someone who wants to destroy the elder gods, and in doing so also destroy all life on the world.

Another incoming quest is Zaros Senntistin – Senntistin being a city buried under the world that will be accessed with the archaeology skill. It’s a city described by devs as “layers of a delicious historical sandwich” where players can unearth the bounty of each age of occupation. After Desperate Measures is finished, the new quest sub team will develop a new Azzanadra quest (while the remaster team will be remastering Managing Miscellania). 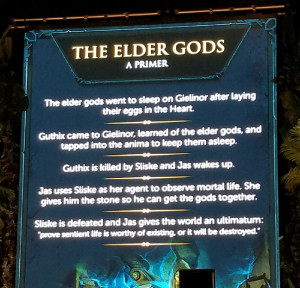 The latest story is building up to the upcoming Elder God Wars dungeon that will launch next summer. It follows the god wars dungeon format, but it follows the story that is building now. “These gods that want to tear apart our world are going to have a civil war, and the player is going to enter in the middle of that — and how they hold up against them,” Osborne explained.

Earlier we mentioned the new skilling pet coming, but Jagex is introducing even more pets soon. Devs are looking to add pets to go along with farming, clue scrolls, mini games, and PvP. And to get the community involved, the studio will host a competition where players will be able to design the look of these new pets.

At the conclusion of the keynote address, Osborne gave fans a timeline that breaks down the order of the upcoming content announced at RuneFest. Here it is:

Surely that will keep devs and players alike busy until RuneFest 2020, no?

A touch on tech updates

As an added bonus, we got to hear a bit about tech enhancements from Mod Pips. In recent months, a new team was created focused on RuneScape’s technology. Called Core Experience, this group is “focused on improving the look of the game and especially the feel of the game play.” Most of these devs’ work is on RS Mobile right now, but there are a number of improvements that will go in all clients, including optimizations (hello zippy loading speeds!), new rendering system that allows for 3-D art with more depth and detail using surfaces and lighting, and canopy cut-out and character silhouettes (which allows players to see their characters under trees or as a shadow behind walls, respectively).

That’s not all, folks! Additional improvements include movement smoothing and differentiated outlines for friendly, hostile, or interactible items. Also showcased were two experimental features, which may or may not ever make it into game. One is movement prediction to help remove lag. The second prototype is a faster server tick rate. Both were pretty impressive when demonstrated in the prototype, so here’s hoping they can work on a game-side scale someday. As Mod Pips put it, “We are exploring ways to make RuneScape’s Core experience look better, feel smoother, and be much more responsive.”