After seemingly countless quarterly updates and leagues, you might think Grinding Gear Games would eventually run out of ideas for Path of Exile. Not so. The studio keeps surprising us, showing us that there are many designs still waiting to be done. For instance, have you seen a POE-styled farming simulator? No? Well, you will come June 19th when Harvest League launches on PC (or the week of June 22nd for consoles). Farmer Exile, coming up!

END_OF_DOCUMENT_TOKEN_TO_BE_REPLACED
Just as in the popular farming game, Exiles will be planting seeds, irrigating, growing, and harvesting crops in this new league. But lest visions of your Shadow traipsing through rows of corn stalks makes you swear off Wraeclast for three months, know that that’s where the similarities end. I mean, do the mature plants in Farmville birth ferocious monsters bent on ripping you to shreds or devouring you whole? Certainly not that I am aware of. In Path of Exile, they do.

Make sure to check out both our pieces on this announcement!

Prior to tonight’s official announcement, GGG Managing Director Chris Wilson shared many details with me about this unique league, including its city building elements, seed-to-monster encounters, and new uniques and skills. He also explained how this league is heavily crafting-oriented, using harvested life forces to customized gear more than ever before. Toss in two-handed weapon and passive skill tree revamps, and you’ve got Harvest.

Harvest League’s new NPC is an Azmeri named Oshabi. Wilson described the Azmeri tribe as simple folk who eschew superstitious belief. Oshabi, however, felt differently: This druidic soul believes in the bountiful powers of nature and the land. After leaving her tribe to seek her fortunes out in the world, she discovers the Sacred Grove, an ancient garden. Here, she begins to learn if new possibilities for power. If only there were some exiles available to help her explore them…

How does your garden grow?

Exiles will help (and reap the rewards) by collecting magical seeds and returning to the garden to plant them through the portal Oshabi provides once you collect some. The seeds, found in seed caches throughout Wraeclast, come in three types: wild, primal, and vivid. Each type is a specific color, and each type must be planted together. All seeds are fully tradeable.

There are also three tiers of seeds. Getting and growing the first tier is simple, Wilson explained. Once you find the cache, you enter the garden and plant them near a collector that matches the seed type. Then, for every seed cache you open out in the world, one growth cycle passes for everything planted in the garden. Tier two seeds, which may drop from tier one mobs, have more complex requirements and are more difficult to grow. All tier two seeds require irrigation. To irrigate, players must build a disperser and then lay pipes to the patch of seeds. There can also be adjacency requirements (needing a specific color/type of other seeds nearby). Tier three seeds are then found occasionally from the tier two mobs, and these have even more stringent requirements to grow. Here, you need to utilize condensers to to process and store unused life force into fertilizer for these seeds.

The unique city building aspect of Harvest comes to play in how players design their gardens. Wilson assured me that folks who are not interested in creating a complex garden and micromanaging it will be able to keep it simple while still reaping the rewards. The majority of seeds have no special requirements; gardens needn’t be overly aesthetic. Basic infrastructure will be inexpensive, and the irrigation pipes will be free. However, those who want to build a sprawling complex with peak efficiency will indeed have that ability. Planning and building (an aspect of gaming I love) is a thing this league! Infrastructure can also be upgraded to work better.

With monsters you fell, and life force wells

So why would an Exile choose to take up gardening in this league? Because that’s where the fight is! When these seeds bloom, they result not in beautiful floral arrangements but in your custom-grown monster encounter instead. And upon successful defeat of your foes, you can harvest their life force to use in upgrading gear.

In Harvest, you truly control your experience. As Wilson put it, “Because you get to choose what seeds you are planting and where and how many, you get to control how hard the monster killing is.” What you plant and where dictates your encounter. Each seed represents a mob, and each tier represents the type of mob (tier one is basic, tier two is a boss, and tier three is special boss). There are also rumors of a fourth much harder and rarer boss that players could grow. Players can plant up to 48 seeds of any tier in a radius to create the size and intensity of encounter they want to face. Want all bosses? Have at it! Want a smaller fight? Plant just a few tier one seeds. Want a massive wave of creatures? Plant all the seeds.

An interesting tidbit Wilson shared is that because of the slowdown in development created by COVID-19 and working from home, GGG pulled designers from Path of Exile 2 to create some of the Harvest monsters, and therefore they are much more detailed and higher-quality than the standard PoE mobs. Wilson is curious to see whether players catch the differences.

And pretty gear all crafted aglow

So besides the thrill of the kill, where’s the reward in this league? It’s in crafting. “What we’re going to try to do in Harvest is not substantially increase the drop rate,” Wilson said. “The majority of the rewards you are getting comes from a very, very generous crafting system.” Instead of looting gear itself, players will use the life force collected from their encounters to upgrade and enhance their gear with desired modifiers. And Wilson shared that it’s the most advanced crafting GGG has added to any league. 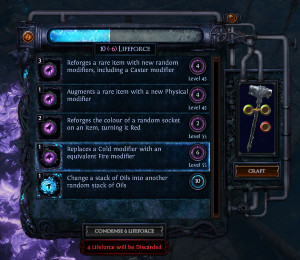 In this experimental system, players unlock a temporary recipe with each seed. They pick which recipe has the modifiers they want and plant that seed. Then they make sure to build a big enough encounter to create the craft since the recipe uses the life force collected only from that visit to the garden. You cannot store life force; once you leave the garden, it is gone. You can, however, craft multiple things at once if you have the recipes and plant enough mobs for harvesting. And any leftover life force can be put in the condensers and turned into fertilizer so it isn’t wasted.

How did this system come about? It’s an effort to stem the tide of loot inflation. “There’s a slow inflation of free items that we need to give players,” Wilson told me. This has led to gradually ratcheting up the rate at which items drop because staying stagnant or reducing leads to many complaints and player dissatisfaction. He described how he started experimenting during Delirium and found that he was getting inundated with items — even uniques — but they were usually a bunch of unwanted or unneeded things.

“We realized that 80% of what people are getting is just the bribery required to make the league feel rewarding,” he said. That just led to folks feeling jaded about rares. So why not make it about less gear but more meaningful gear? This way players look forward to returning to the garden, not just getting gear spammed in their faces (our inventories thank you!).

Make sure to check out both our pieces on this announcement!

What if your world changed every three months? What would you do differently? Path of Exile does, and MOP’s MJ Guthrie explores and experiences each new incarnation in Wandering Wraeclast. Join us biweekly for a look into each new challenge league and world expansion — and see whether MJ can finally reach the end of one world before it ends!

I love the idea of leagues in POE and I love the way they continually come up with new ways to disguise the gear grind, a lot of the systems add up to the same thing “Collect x, meet Y NPC and use resource to grind gear” but the way that last part takes place is what makes it so interesting.

For once this league looks like it might not just be about speed clear builds aswell, that is one of two parts of POE I wish would change (though I understand this is not the case for everyone)

The other, and my biggest concern about this league is how the last 3 or 4 leagues have been more of a fight against bugs and crashes than the mobs for the first month, I hope that with the more focused scope of this league they can deliver it better because it is still a game I like to go back to now and then.