A decade after Star Wars Galaxies’ “New Game Enhancements” hit the game, controversy, grumbling, and revelations still pop up about the notorious decision to overhaul the entire game. Some maintain that it ruined the game, while others acknowledge that what came after actually ended up being better.

As the 2003 to 2005 pre-NGE era is quickly vanishing into the distant past, I wanted to preserve some of the history of what the game was like before that fateful patch day. To aid in this project, I asked six Star Wars Galaxies veterans to share some of their memories and stories from that time. Here’s what they had to say about what in-game life was like in those first few years.

1. It was a true sandbox

Joshua M.: “I think the big thing back in the pre-NGE era was that the content was what you made it; it was a true sandbox. There were no concept of levels, just the skills you’ve learned and the weapons you were certified to use. You could spend the entire game never entering combat and still be just as productive as the one that did. There were 30+ professions in the game ranging from Politician to Teras Kasi Artist, a master of hand-to-hand combat. I once saw a character make a living in-game designing people’s house interiors. The ideas people came up with to make something as simple as a shop desk was astonishing.”

2. You had a massive amount of character flexibility

Michael: “This is what I remember most about SWG: I could do anything! I was a Pikeman (I think that’s what it was called) and a Ranger. I just preferred polearms and camp sites. I dabbled with Entertaining, Medic, and Manufacturing while making macros and placing harvesters. I really wanted to be a Bounty Hunter, but I believe it would have taken most or all of my allowed skill blocks. The important part is that I could have; the flexibility was the best part.”

Joshua O.: “I remember back when you started completely empty. Do you want to play as a crafter? A Bounty Hunter? A support? It was up to you. You could mix and match trees depending on your skill points to combine two trees in a way you see fit. Pistoleer Medic? Sure. Teras Kasi and Swordsman? You bet. Pick your classes and combine them to create a great composition. You started your journey out creating a combo of classes that you saw fit.”

3. Every day was an unpredictable experience

Michael: “I always had a twinge of excitement when walking out of the spaceport; I never knew what might be happening. One time I walked out to an AT-ST shooting at some Rebel players and ended up getting shot by a rocket. It was both fun and crazy. Another time I heard loud booms and went around a building to see a Bounty Hunter fighting a Jedi! What’s more Star Wars than that?”

4. The economy was the core of the game

Randall: “The crafting, auction house, and economy were great. With the right skills, you could travel all over the planets, searching for the perfect resource that had the highest quality. You would then build extractors and mark the map, returning every so often to collect the harvest. I love the feeling of accomplishing something even when offline! And the fact that most resources had a wide range of stats meant that the products you crafted would be different from the same item someone else made using ingredients from another planet.”

Joshua M.: “The economy was entirely player-driven, and there were thousands of resource types. The best gear was crafted, but not without killing the hardest creatures/NPCs in the game for components.”

5. The housing was second-to-none

Oliver: “The housing was the best I’ve experienced in an MMO. You could decorate houses as you saw fit without much limitation, as every object could be dropped into your house to become a decoration. Other than that, there were huge player-run cities complete with taxes and carefully decorated shops.”

Randall: “The housing was wonderful — the Tatooine desert style was my personal favorite. It could be built almost anywhere outside the cities. I remember spending a lot of time finding the perfect view and furnishing it just so. Standing on the balcony looking out over the sunset was so Star Wars-y!” 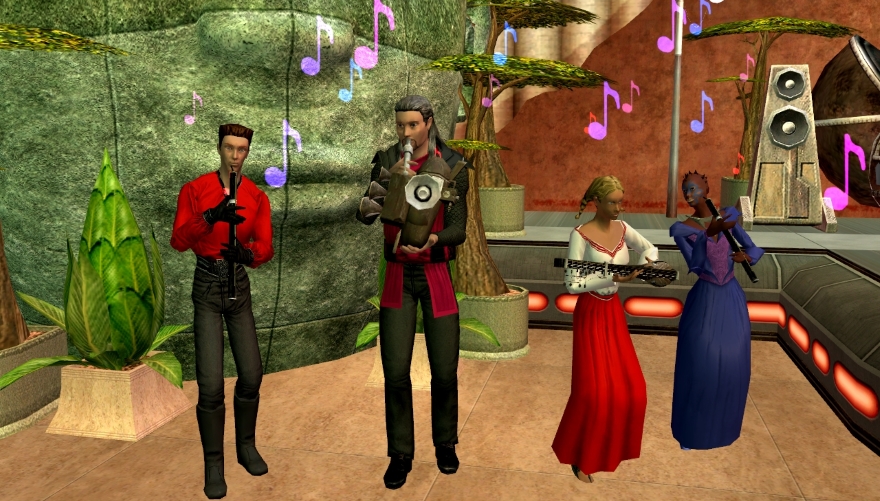 6. Becoming a Jedi actually meant something…

Oliver: “You could become a Jedi, but you had to work for it. The system went through a few iterations, but when I became a Jedi, it was a six-month journey through the Force village on Dathomir just to become a relatively helpless padawan. After that, I had to grind my way to master while trying to avoid being spotted by NPCs and players. If that happened, I’d wind up with a bounty on my head, as Jedi weren’t exactly allowed to flourish under the Empire. I finished with a character stronger than non-Jedi characters, but boy did I have to work for it.”

Joshua M.: “An early concept in the vanilla game was Jedi being an alpha class. This didn’t come with risk; as Jedi faced permanent death. This was quickly changed however and the process to become Jedi much less painless — but hard nevertheless.”

Joshua O.: “Those who wanted to become a Jedi, including me, sought out the path of greatness… and in most cases, a sign of complete badassery. My fondest memory of Jedi action, is seeing a Dark Jedi and a Light Jedi fighting in Anchorhead, with 50 people around them watching. It was nighttime, with their signature red and blue lightsabers clashing in the middle of a well-traversed town. The fight lasted a good time — I do not recall a victor — but I remember sitting back and watching.”

7. …But taking out bounties on Force-users was almost as cool.

Oliver: Bounty Hunters could take missions to hunt down and kill Jedi players in exchange for fairly sizeable rewards. Once you took a bounty mission, you had to actually hunt your prey by sending droids out to determine which planet a player was on and then where on the planet they were. Once you found the Jedi, you needed to plan your attack carefully, both to avoid spooking them and to increase the chance you’d be able to take them down. It was a rush (for both Jedi and the Bounty Hunter) that no other MMO has managed to capture.”

8. Starports were an adventure unto themselves

Paul: “In the beginning, it used to take 10 minutes for a shuttle to arrive at the starport. So players would hang out while they waited, and sometimes you would see Doctors set themselves up offering buffs for a small fee. Using the shuttle required a ticket, and if you needed to travel to more than one planet, you would find yourself in a mad dash from where you landed all the way to the starport lobby to purchase a ticket and then back before (hopefully) the shuttle departed.”

9. You could take your home with you

Randall: “The first time my Scout was able to build his own camp, it was a thrill. The tent was like open housing that could be build almost anywhere and could be visited by any adventurer who wanted to stop by to chat (and get the associated camp buffs). Such a great feeling. I met the people of my first guild this way, and some of those people were MMO partners of mine for years after.”

10. You could live a combat-free life if you desired

Joshua O.: “Not everyone wanted to become a Jedi. You had professional crafters, where some players sole objective was creating a market for the game. Doctors would form orderly lines at spaceports for their buffs to help people on their adventures outside the safety of cities. What made it different? The fact you could choose to be whatever you wanted with one character. Nothing tied you down; you could be whatever you wanted. An Entertainer would dance in a cantina buffing war thrived patrons, and then after making a decent amount of credits made they could change over to a pistoleer. I absolutely loved being support without combat. I could place a campsite for players with amenities and safety. It was a great time without even having to engage in combat at all.”

11. The NGE devastated many players

Joshua O.: “The NGE was the sole reason I quit SWG. The game used to have the freedom and empowering force of the community. When NGE launched, it changed everything, leaving me and many other veterans wondering why they changed it. It changed a game that had a soul to a generic rock-paper-scissor RPG. Call it rose-colored glasses, but SWG pre-NGE remains one of the my favorite MMOs to date, and I have yet to see something come close to it.”