We’ve updated the end of this piece with the latest info as of July 31st.

MMO gamers were bummed back in May when Gamigo sunsetted Dragon’s Prophet over in the Europe, especially since it was the last remaining western version after Daybreak’s 2015 sunset of US version of the game. So it was cause for cheer when the game recently popped back up on Steam, especially since we’d long wondered whether Runewaker was clawing back games like Dragon’s Prophet and Guardians of Ember and ending EU publishing contracts in order to self-publish them.

But a closer inspection of the title on Steam leads us to wonder whether this version of the game is fully legitimate, as a search for the studio BOBYGAME seems to bring up only brand-new social media pages, Roblox and Minecraft profiles, and small gaming YouTubes. The official website for this game also appears to be dragonsprophets.com, and it’s already got a beta and “recharge diamonds” button.

One Redditor who claimed to work for the original publisher cast serious doubts on the provenance of the game. 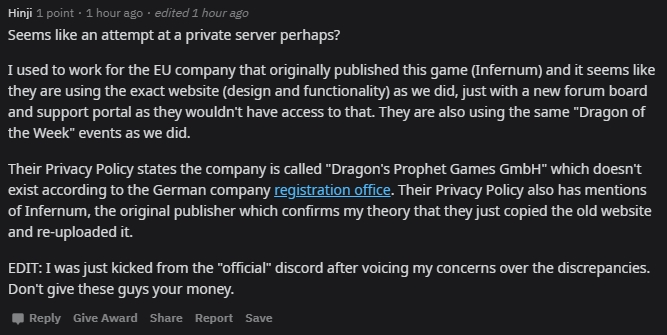 We’ve asked the Discord developers to clarify their relationship with Runewaker (we haven’t been banned yet), and we’ve reached out to Runewaker for a statement about its involvement or lack thereof too. We’ll update if we get it. But in the meantime, it might be wise to follow Hinji’s advice. While our readers will know that we generally aren’t morally opposed to rogue servers for dead MMOs, we’re concerned that the game is being presented to players as fully legitimate when it may not be.

We’d like to reiterate that our site favors game preservation and emulators especially for dead MMORPGs, but we cannot stress enough that this particular developer is being extremely shady: banning journalists asking basic questions in Discord, lying about his relationship with the IP owner, and issuing fraudulent “proof” of his legitimacy. We’re assuming that Valve will do at least as much research as we did, and you’ll never see this version of the emulator on Steam – or anywhere else.

The Dragon's Prophet scammers are now claiming that they are going to publish the game on the PS4, Xbox One, and Xbox 360. Yea, not going to happen. pic.twitter.com/LfMMX4Y9pp