It’s pretty common to stumble across a new game on the front page of Steam and think it looks interesting enough to add to your wishlist, but often such games languish there for months or years, and even if you do end up trying them, they often disappoint.

Such is not the case for real time strategy title Iron Harvest 1920, which officially launches on Steam today. I was pleasantly surprised to find a free open beta over the last few weeks offered me a chance to try the game immediately, and even more surprised when it turned out to actually be a pretty promising game.

Sharing a universe with the board game Scythe (also available in a virtual incarnation on Steam), Iron Harvest takes place in an alternate history version of post World War One Europe in which massive war mechs rule the day. Players control one of three factions as they vie for dominance.

The Polanians (Polish) focus on harassment with an army of long range and high mobility units. The forces of Rusviet (Russia), meanwhile, emphasize melee and close range units, and Saxony (Germany) wields an army of very slow but very durable units.

The three factions aren’t as distinct as you’d find in something like StarCraft (they do share some units between them), but they’re different enough to not just feel like reskins.

As much as all three factions feel interesting in their own way, I do think it’s a bit of a missed opportunity to have them all be from roughly the same part of the world. Frustratingly, there are other nations from farther afield mentioned as early as the game’s tutorial — including a “Shogunate” — so clearly such options exist within the setting. Presumably these other factions are being reserved for DLC, and I don’t mind the idea in theory, but I think it would make for a better sales pitch if the base game options were more diverse. 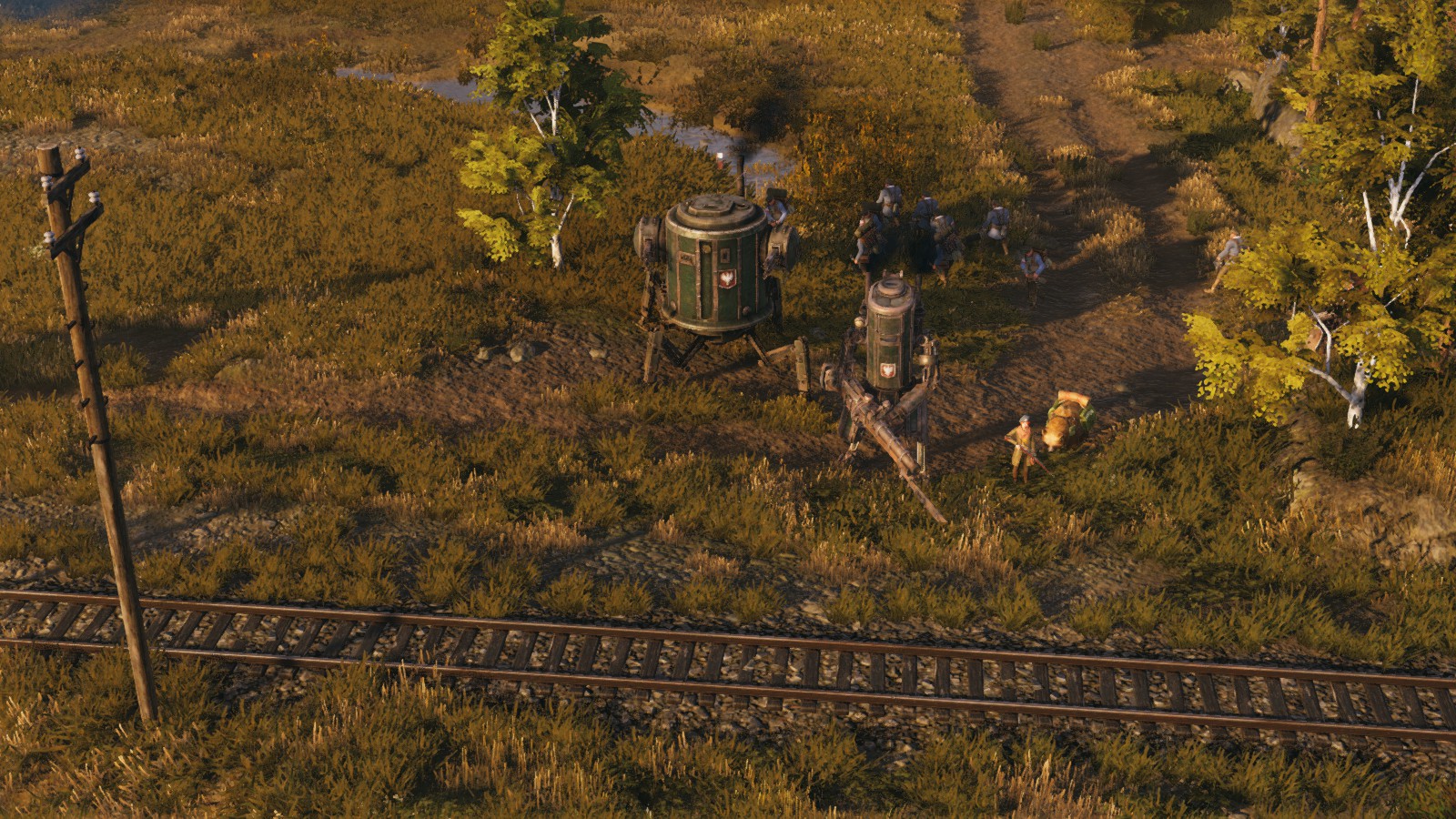 On the plus side, what is included in the game right now is beautifully realized. The graphics are astonishingly pretty — easily the best I’ve ever seen in a strategy game — and the developers have done a fantastic job of illustrating the brutality and bombast of war in this setting. Gunshots snap and crack, while explosions shake the entire field of battle. Mechs can simply walk through small buildings if they get in the way.

In general it was a very polished beta experience, with few bugs or issues to speak of. The September launch date doesn’t seem like rushing things; this game is ready. I did experience a bit of a steeper than average learning curve, but once I realized what the right approach to this game is, I started really enjoying myself.

These days, most RTS games feel a bit like nostalgia acts. They’re mainly attempts to replicate the success of the RTS games of yesteryear. This is not entirely a bad thing, mind you; there were a lot of great RTS games back in the day, and those are formulae that deserve to be replicated. But that doesn’t mean it’s not a delight to see a new game genuinely chart a new course.

I kept trying to figure out what hole to fit Iron Harvest into. Is it more of a clone or StarCraft or Command and Conquer? Eventually, though, I realized it’s not really a clone of anything. It’s just kind of doing its own thing. While its core mechanics are largely familiar to any RTS player, the way they all come together doesn’t quite feel like anything that’s come before.

Broadly speaking I would say that Iron Harvest is more of a micro game than a macro game. That is, it’s more about managing your troops in battle than about managing the economy. There’s only two resources to harvest and a handful of structures to build. Units upgrade automatically by earning XP in battle, rather than by researching upgrades at your base. You don’t even have to assign workers to gather resources.

It’s not like other micro-oriented RTS games I’ve played, though. It’s neither the frantic dance of StarCraft II, where a single mistake spells disaster, nor the spell-slinging of Warcraft III, where mighty hero units duel with game-changing magic. The pace of combat is relatively slow, and active abilities are few within your army. 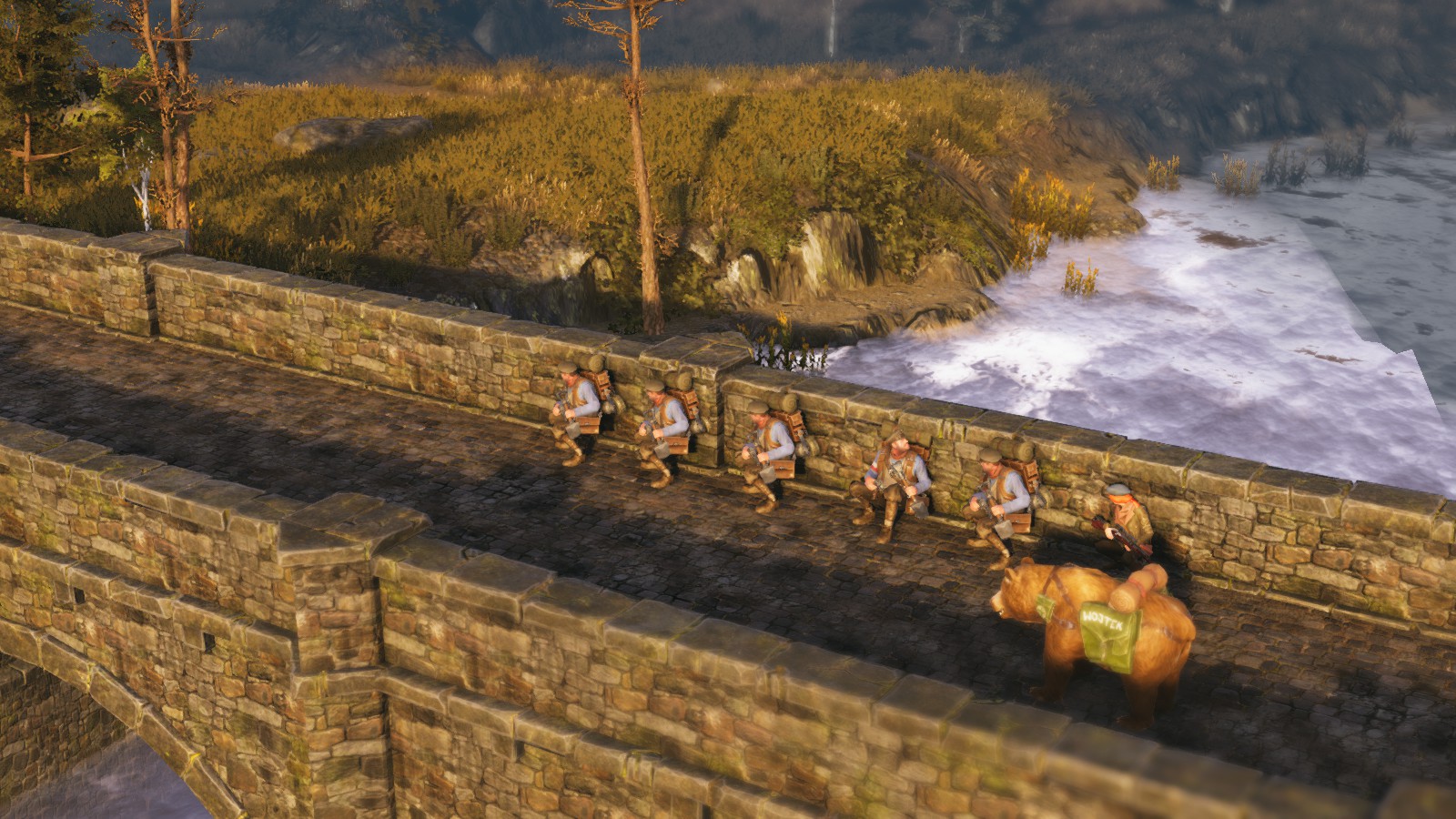 Instead, micro in Iron Harvest is mostly about positioning and using the terrain to your advantage. Infantry units can take cover behind barricades and low walls. Mechs must protect their vulnerable rear plating. Gun emplacements have limited arcs of fire. One of the more satisfying plays I made in Iron Harvest was sneaking a melee mech into an enemy base and smashing a bunker from behind, where its guns couldn’t reach.

None of these things is hard to manage individually, but when you throw them all together, it can present an interesting challenge, and a large-scale battle can feel quite hectic despite a relatively slow pace of combat. The closest analogue is probably Bungie‘s old Myth franchise, but even that’s an imperfect comparison at best.

When it comes to story, the open beta includes only a sample in the form of the opening missions of the Polanian campaign. It’s an unusual start, as your first mission introduces you to the main character, Anna, as a child having a snowball fight with some local boys.

It’s a strangely peaceful and intimate milieu for a war game, and I know what you’re thinking, but no, the tutorial does not end with Anna’s village burned to the ground and her swearing revenge. The threat of war looms on the horizon, but the beginning of the campaign is more about establishing who Anna is and what she has to fight for.

It doesn’t take too long for the game to jump ahead a few years and dive into the action, but the campaign — at least the part I played — never really lost sight of the characters at its heart, and there’s a level of emotion and humanity to the story that you usually don’t find in the RTS genre, which prefers to tell its stories on the grand scale.

Suffice it to say, I’m impressed. 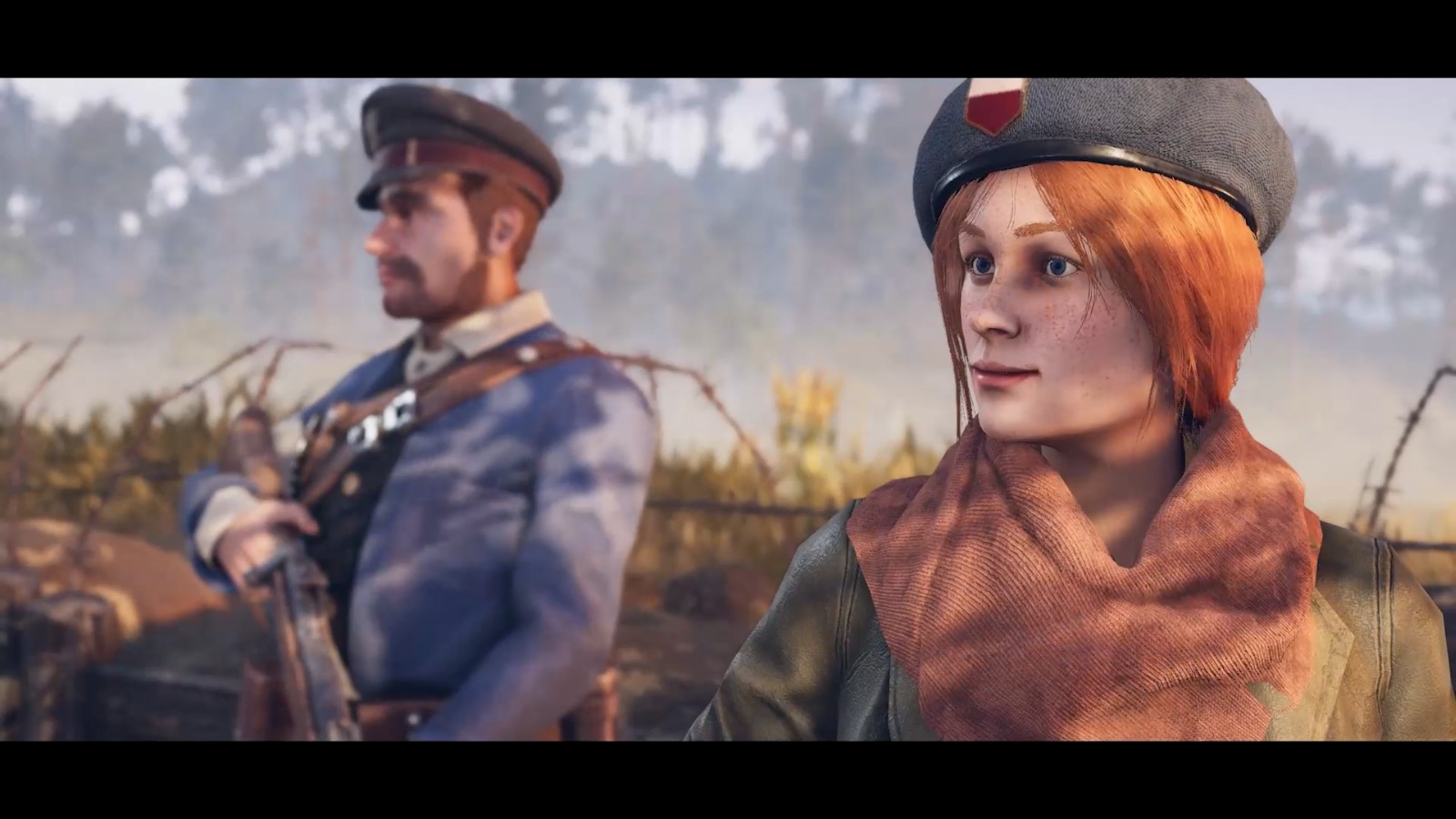 My one minor complaint about the story is how often the male NPCs go out of their way to react with shock that Anna — a woman! — is fighting. Now, this is probably the realistic reaction for men in 1920… except this isn’t the real 1920. Since this is already an alternate history, why not change more than the technology? I’m sure the developers probably didn’t mean any harm, but it’s a sad commentary on the world that giant combat mechs are considered less implausible than gender equality.

That said, on the greater scale of video game sexism, this does strike me as a relatively mild case, and for what it’s worth Anna herself is a pretty awesome character. She hits a great balance of being heroic and inspiring yet still showing enough vulnerability to be believable as a farm girl thrust into extraordinary circumstances.

My other issue with the campaign is that there doesn’t appear to be any difficulty settings at the moment. I didn’t find the difficulty unmanageable, but it did keep me on my toes, and I’m an RTS veteran, so there could be some accessibility issues for those less experienced in the genre. Hopefully difficulty settings are something that will be added in the launch version.

It’s also worth noting that while a cooperative version of the campaign is planned at some point, there’s currently no ETA on its actual implementation. It’s not going to be in the initial launch; that much is clear.

Co-op is currently available in skirmishes versus AI (which can also be completed solo), though there doesn’t appear to be matchmaking for skirmishes in the current build. Like most RTS games, the focus of multiplayer appears to be on competitive play. Similar to StarCraft II, multiplayer will be supported by a robust leveling system with a wealth of cosmetic rewards, such as profile pictures. 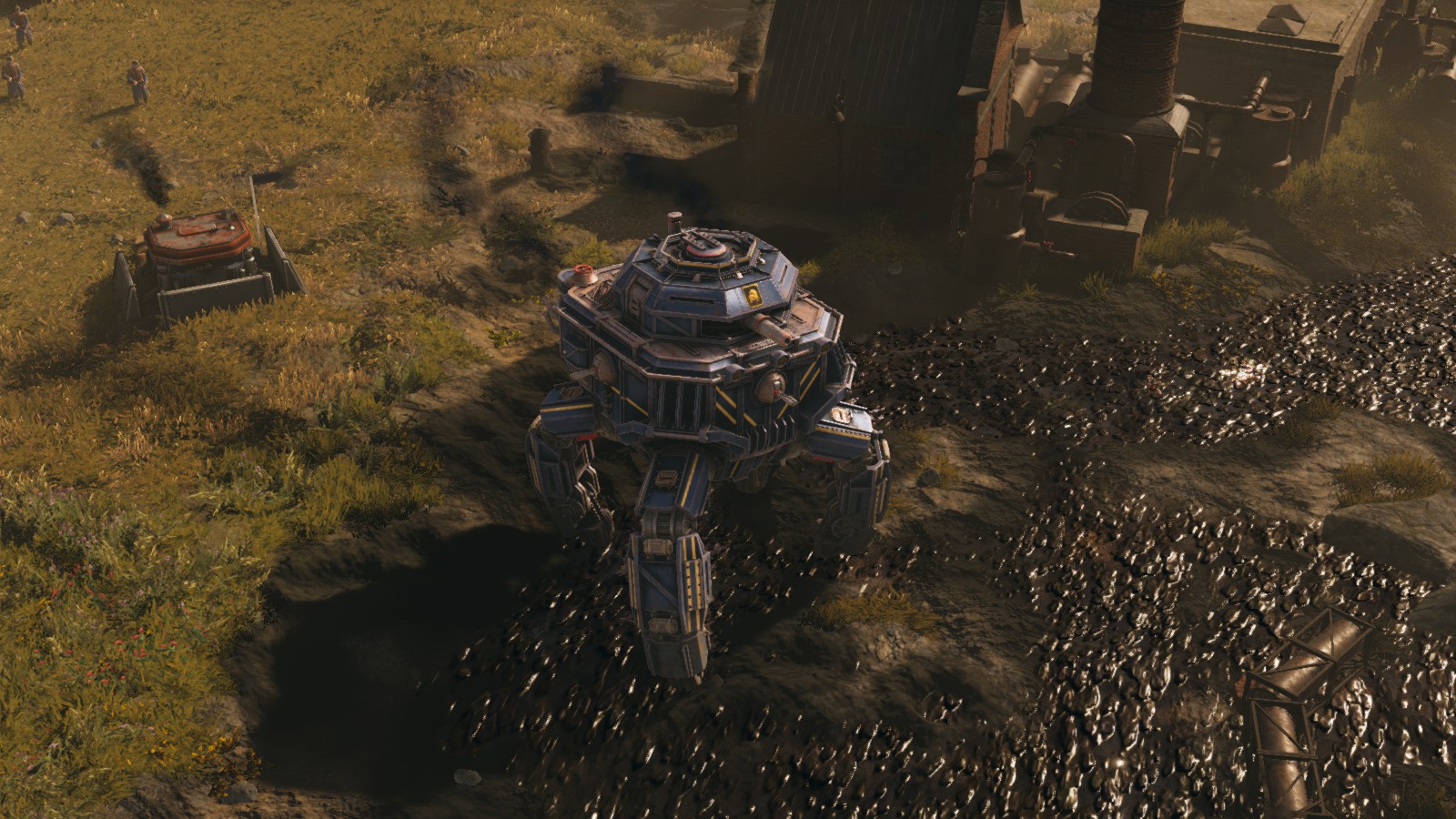 For my money, it’s worth it for the campaign alone, and anything else is a nice bonus. I pre-ordered the deluxe edition after a few days in the open beta.