I’ve talked in the past about liking survival mechanics in games, but not so much survival games themselves. There are a couple of reasons for this, one being the genre’s cutthroat PvP focus. This has left me hungry for a good PvE survival game. For a time, Fortnite seemed like it could provide that, but then battle royale happened, and the PvE mode was shuffled off to the side and all but forgotten.

Enter a new contender: Drake Hollow, a warm and colorful survival game about protecting plant creatures in a mystical otherworld. Could it succeed where Fortnite failed?

Drake Hollow begins on a somber note; suffice it to say that your character’s life isn’t going the way you’d want it to. It is in this dark moment that you make contact with a mystical crow, who needs their help and beckons you to another realm, where your talents are needed.

One thing I found interesting about Drake Hollow off the bat is that it joins New World and Magic: Legends in eschewing binary gender choices. You chose from one of two body types, one leaning stereotypically masculine and the other more stereotypically feminine, but no other choices are tied to this. The faces are pretty androgynous and can work for just about any gender identity, and you can choose any hairstyles or clothes you want, regardless of body type. For most people, this probably won’t matter much, but it’s nice to see developers making the effort to be more inclusive.

Once you’ve crossed into the otherworld — the Hollow — you learn that this realm is being strangled by a dark force called the Aether that corrupts all it touches. This is devastating to the Hollow’s main residents, the Drakes. 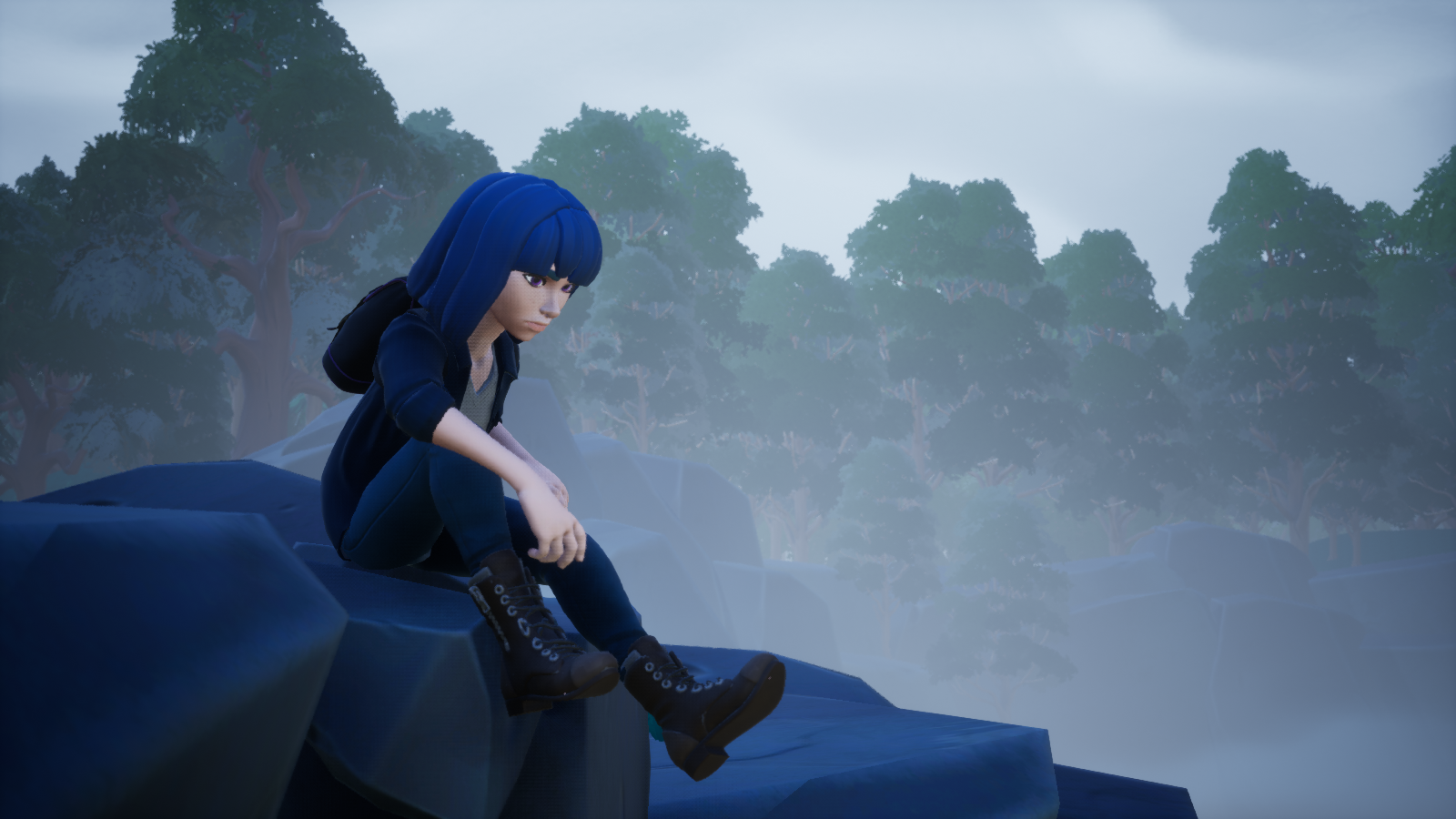 Despite the name, Drakes aren’t fire-breathing lizards. They’re small, lovable plant creatures. Here’s where the survival mechanics come in: Rather than needing to meet your own character’s needs for food and other necessities, Drake Hollow is about supporting the Drakes under your protection. They need food, water, a place to sleep, and entertainment, all of which are provided by harvesting resources from the local land and building up an encampment for your Drakes to call home.

In return, the Drakes provide you with magical resources and buffs, and as your Drakes grow in number and evolve, they level up your character, unlocking new building options.

At first, it can be a bit of scrabble to survive as the Drakes chew through your resources, but it doesn’t take long at all to reach a point where your camp is much more self-sufficient, allowing you to focus more on exploring farther afield and rescuing more Drakes. Long term, you move onto new lands, each of which embodies a different season.

One quirk that isn’t as clearly explained as it could be is that Drake Hollow‘s fast travel system is something you have to build yourself. You can construct way points which then allow you to surf energy conduits back and forth between your base and the field. It’s pretty cool, and it helps sell the fantasy of taming a wild land, though it could be better introduced. It took me longer than it should have to figure this part out.

And that’s Drake Hollow‘s simple gameplay loop in a nutshell. Explore, loot, build, repeat. Basic, but it works. Along the way you may encounter monsters to fight, and on occasion the monsters will launch raids on your camp, which you must fight off.

The combat’s pretty simple, but again, it gets the job done. You can hit and block with melee weapons, while ranged weapons provide a powerful secondary option at the cost of very limited ammo. 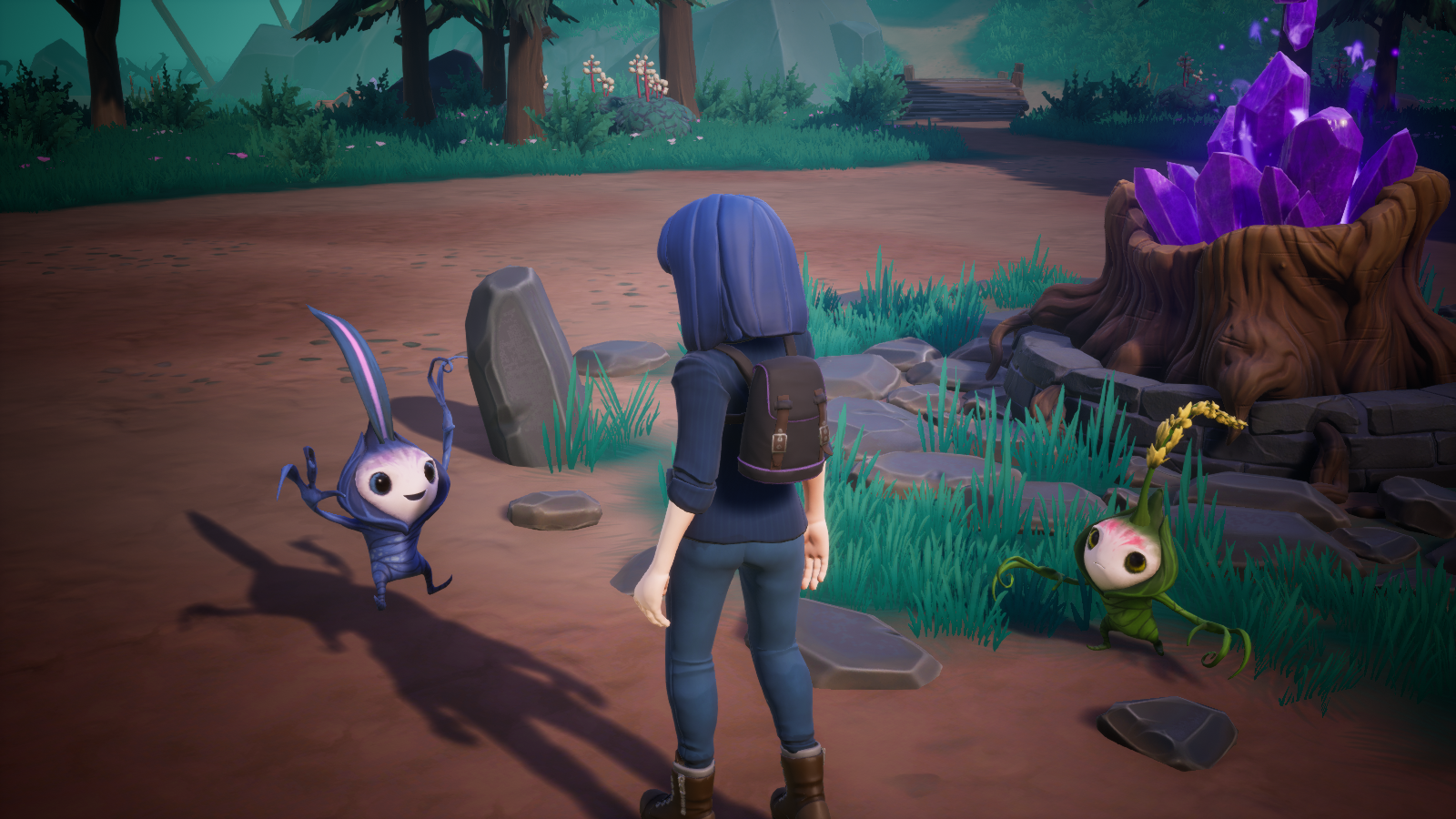 Things might ramp up later, but for now monsters are not super common, and there’s not a lot of challenge — I died only once, after being ambushed by a particularly large pack of baddies.

I think that’s the right choice for this game, though. Sometimes you want a challenge, but sometimes you want to relax, and Drake Hollow is better suited to the latter. Exploring feels like a pleasant stroll through the countryside; there’s not even any falling damage.

Story isn’t really the focus here, but there are some quests — just enough to give the game a bit of purpose beyond what most survival titles offer — and you can collect notes here and there that flesh out the backstory of the world. This game can feel a bit barebones in places, but I think that’s a bit par for the course with this genre, and it certainly doesn’t lack for personality.

One of the first things I noticed when I started playing Drake Hollow is how utterly enchanting the soundtrack is. This is already likely to go down as one of my all time favorite video game scores.

Meanwhile, the graphics are also quite pretty. They’re very colorful and stylized. It kind of reminds me of WildStar‘s visuals, but warmer and more inviting somehow.

And then there’s the Drakes themselves. Somewhat disappointingly, they don’t seem to have much variation in their appearance, nor much else to set each individual Drake apart, but their animations do have an incredible amount of charm. One of the early entertainment items you can build for them is a small stuffed animal, and the Drakes will pick them up, spin them around, and snuggle them, their faces full of utter delight. 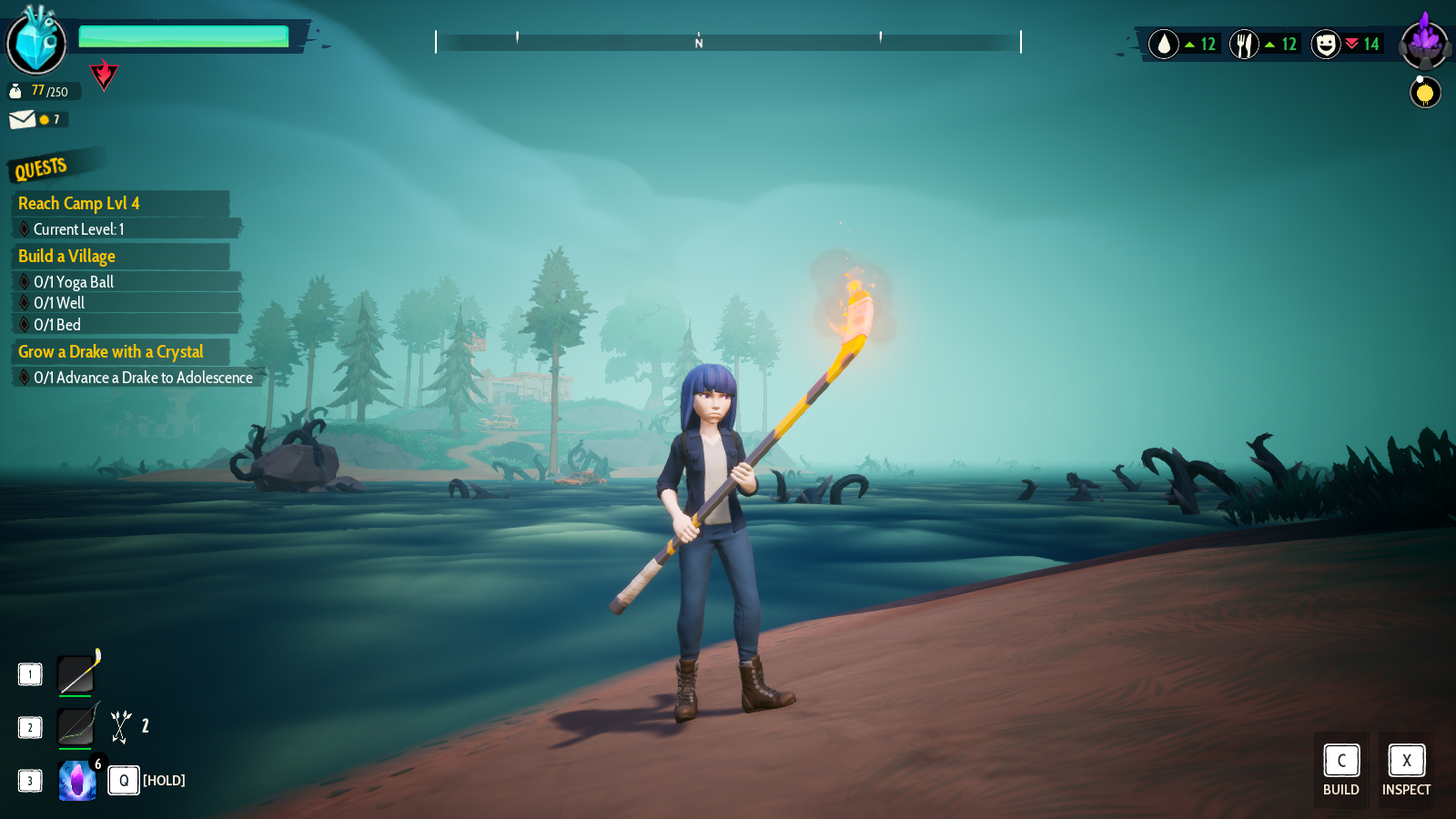 I tell you this: I’m not usually a big fan of “cute” stuff, but my heart melted.

There’s other little things that add personality to the world, too. The local merchant is a talking magpie, and the currency to trade with them is “shiny things.” Most weapons are more in the realm of tools or toys. At one point I found myself slaying demons with a flaming hockey stick, and as a Canadian I can’t help but feel that this is on some level my ultimate destiny.

More than anything, though, I think this is a game you’re meant to play with friends. It is absolutely possible to play and enjoy Drake Hollow entirely solo, but it’s clearly best suited to being a low stress co-op game to play with a friend or two. In that context, the basic story and simple gameplay make more sense. Drake Hollow is a pleasant retreat for you to socialize in.

With how bleak the world has been lately, I think this is the kind of game we really need. A game about protecting the innocent, co-operating with your friends, and healing the land.