Here we go, folks: Tonight we’re finally getting some hard details on what The Elder Scrolls Online is up to in 2021, courtesy of the ZeniMax Online Studios livestream this evening.

END_OF_DOCUMENT_TOKEN_TO_BE_REPLACED
What can we expect? ZeniMax already teased the year’s theme – Gates of Oblivion – with a brief video back in December, so we’re assuming we’re heading to the plane of Oblivion at minimum. Hope you like red lava! Cryptic coins sent to press and community members were decoded by player @jimminyjojo and seem to point to the involvement of Mehrunes Dagon, the big bad in TES IV: Oblivion. ZOS’ Matt Firor has also told players that it’ll be working more on “stability and game performance” with less time on “new game systems.”

Are you going to watch our Global Reveal Stream tonight? Get your pencils ready for our Reveal Stream Bingo! And don't forget to tune in at 5 pm ET to watch the show. pic.twitter.com/Qo0bFJofbH

The show begins at 5 p.m. EST on Twitch. You can watch along with us as the reveal marches on; we’ll be updating as we go and as embargoes lift!

If you're watching the stream be sure to take this survey when you have a moment! https://t.co/eC0oVqKGx5

So Mehrunes Dagon is indeed the big bad as people suspected, and the Deadlands and a “deal with the devil” aka Mehrunes will factor into the plot. Expect it to “focus a lot on Imperials and Argonians” and include a new tutorial too along with three separate regions. Definitely, the companion system is one of the highlights of this chapter, allowing players their very own hero pet people, and it fits in perfectly with the franchise. Prepurchase is live now, and it launches in June. 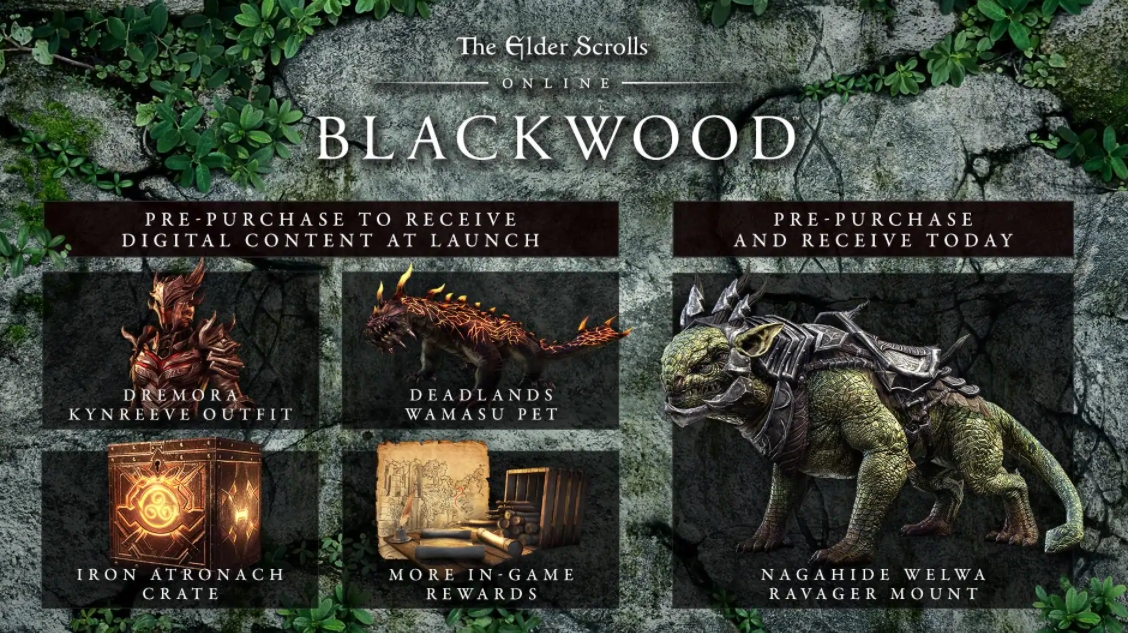 Pre-purchase Blackwood to get a unique Nagahide Welwa Ravager mount! For a limited amount of time pre-purchases also include the Nightmare Bear Cub pet. pic.twitter.com/6l7tsB5FiS

Before that, however, the Flames of Ambition DLC will launch the traditional pair of dungeons.

Blackwood itself is due out on PC (and Mac and Stadia) June 1st, with a console release a week later. Blackwood includes the ongoing Gates of Oblivion storyline, the new Blackwood zone, a new companion system, a new 12-person trial called Rockgrove, new Oblivion Portal world events (of course!), and an assortment of “new delves, public dungeons, world bosses, […] stand-alone events” as well as “updates and quality-of-life improvements.”

“Blackwood packs more than 30 hours of new main storyline, tons of side quests, countless quality of life features, and, for the first time ever, introduces Companions who will adventure through Tamriel alongside the player. The new Chapter will take players from the walls of the Imperial City of Leyawiin, first featured in The Elder Scrolls IV: Oblivion, to the murky bogs of Shadowfen, and of course to the mysterious region of Blackwood where players will uncover the Daedric plot at its heart. The new Rockgrove Trial, Oblivion Portal World Events, unique Chapter-specific rewards and more will provide ESO players and newcomers alike with an amazing year of deadric destruction.”

And we can also expect two more DLC for the bottom half of the year: another dungeon DLC in the third quarter and another story zone DLC for fourth quarter. The fourth quarter, by the way, will have more emphasis on the Deadlands.