If you’ve been keeping an eye on Warhammer Online rogue server Return of Reckoning, you probably already know that the game is knee-deep in its take on the Stronghold Saga, which currently pits Dwarves against Greenskins in the Marshes of Madness. But this month, the player dev team has been hinting that there’s more than just RvR on deck for this leg of the saga: It sure looks as if they’re bringing in cities as well, cities that were once planned for the game when it was alive and well under Mythic but never made it in.

“When the world of Warhammer Online – Age of Reckoning was introduced to us back in around 2007, we were told we were going to be able to visit all of the races’ capital cities,” the player devs explained. “Not long after, we were told how ‘Campaigns’ were going to work in Warhammer. Players would fight in open-world group PvP called Realm vs Realm or RvR. The top-level players would fight in Tier 4, which was a massive battlefield spanning five full-size zones where players would push the tide of battle toward the enemies’ capital cities, invade, slaughter the king, and pillage what was left. This would happen simultaneously in Empire vs. Chaos, Dwarfs vs. Greenskin and High Elves vs. Dark Elves. Mythic even showed us how it would work for the Dwarfs vs. Greenskins.”

If you were around back then, you might even remember some of those videos because the Dwarfs vs Greenskins zones were featured early, along with a relatively complete Dwarf city, parts of which were included in the closed beta. Of course, it was not meant to be; all but two cities were ultimately cut from the game before launch: Altdorf and The Inevitable City. At the time, Mythic planned to implement the other cities later, but that was ultimately scrapped too, as the game’s anemic performance eventually led to high-profile departures, layoffs, content droughts, and then the sunset itself. In fact, when the sunset was announced, Mythic even told players that it had tackled “two of the four remaining fully built cities” – Karaz-A-Karak and Karak Eight Peaks – but the optimization work was too much to overcome.

That was six years ago, however, and players have been left to restore the game on rogue servers, which brings us to Return of Reckoning and its content plans. The group recently dropped a teaser video that appears to show a train traveling through Dwarven mountain terrain, telling players to look forward to… something… on September 18th.

The Reckoning team is playing coy with the details, meaning folks on the game’s forums have been left to speculate on what the “more to come” actually means. But the developers did reiterate that players will want to tune in to the stream Saturday as they chat with “former Mythic employees to talk about the Dwarf and Greenskin cities and what was meant to be the end of The Stronghold Saga.” Let’s just say that it’d be an awful lot of teasing not to give you at least one of those cities now. 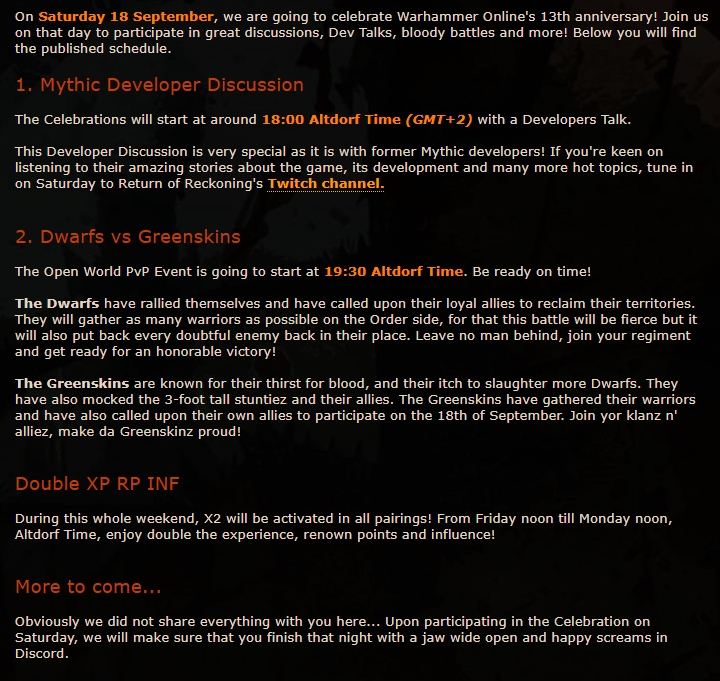 Started this game as a noob about a month ago and have been having a great time. Highest character is still only 33, although I’d have hit 40 if I didn’t level every class to 10+. Game really picks up at 16 once you can leave tier 1.

If you played the original game, the current version is definitely worth your time. It has given me all kinds of good-feeling flashbacks. And if they are gunna ADD a city, I’m gunna be there…

Played there for a bit and remade my old main from when it was live (Magus). They do a decent job but the actual game itself always felt unfinished so it still does on RoR as well, but they deserve credit for making it work and it actually feels better than the mess that live became.

Ive tried this one a few times, having been a player/fan of the original when it was out.

The problem with this one is so much of the game is focused on PvP, that when you get to around level 10 or so and the content starts pushing you towards pvp oriented content… well… its just lacking because of the lack of players, or imbalance of one faction vs the others. The result for me was long queue times and pretty unfun matches.

It’s very top-heavy. The best time to play/start playing is during an event when XP is boosted considerably, like anniversary. There are a lot of players at end-game, but below that it can be quite sparse. The go-to way of leveling is doing Public Quests while queued for instances, and if you see/hear a big lake battle going down then hop in, but make sure you’re in the open rvr group for that lake and get the mass amount of group XP.

If this isn’t a troll post then you need to take the four hours to level out of tier 1. After that, you’ll notice the game is a lot better. Constant scenario pops and RvR action.

Look, I get that your experience is/has been different than mine. That shouldnt make me a troll. Nor does it change the experiences I have had. Many aspects could have played a part in what I experienced: Faction I picked, time of day I played, time of year I played (the post above yours event states that the best time to play is during any sort of event, which would mean that some periods of time are worse than others), etc etc.

And Im perfectly not off base to not be happy with the mentality of “Play for X hours before things get fun” aspect that exists in some games. That has nothing to do with my initial experience, but its not a mindset anyone should be using to push on people who arent enjoying something. Its going to scare away more people than its going to gain.

This isnt a slam at those running the game as they didnt design the game, and its awesome that they are managing to bring it to the players who didnt want it to shut down in the first place.