I’ve been wanting to write this column for a while, but it’s been a struggle to find the words. I’m never sure of how to talk about New World‘s storytelling. I don’t want to oversell it… but I also don’t want to undersell it.

New World‘s story has gotten a lot of criticism, and I agree with virtually all specific criticisms leveled against it, at least to a point. But when people start saying that the story is totally without merit, or just plain bad, I balk at that. It definitely isn’t one of the best examples of storytelling in the MMO genre — at least not yet — but there’s good stuff there, lurking in the mists of Aeternum.

Let’s start by looking at quests, which are generally the main vehicle of story in an MMO. New World‘s quests are pretty poorly regarded, and I’m not going to claim they’re super special, but even here I think the quality is higher than some have claimed.

For example, pretty much every quest NPC does have a clearly defined personality and “voice” (in the literary sense, as well as the voice-over sense). It’s nowhere near the level of character depth you’d see in something like The Secret World or Star Wars: The Old Republic, of course, but it’s more than I’ve seen in many other MMOs.

It feels like genuine thought and care was put into crafting each NPC. Even if the quests are generally not deep enough to fully flesh them out, it’s usually enough to make them feel like real people, as opposed to glorified quest dispensers. It helps the world feel populated and alive.

Then there’s the main storyline, and yeah, it’s nothing special. At least not what I’ve seen; I’m not finished yet. But it serves its purpose. It gives you a sense of direction and purpose as you move through the game, while helping flesh out the backstory of the setting. 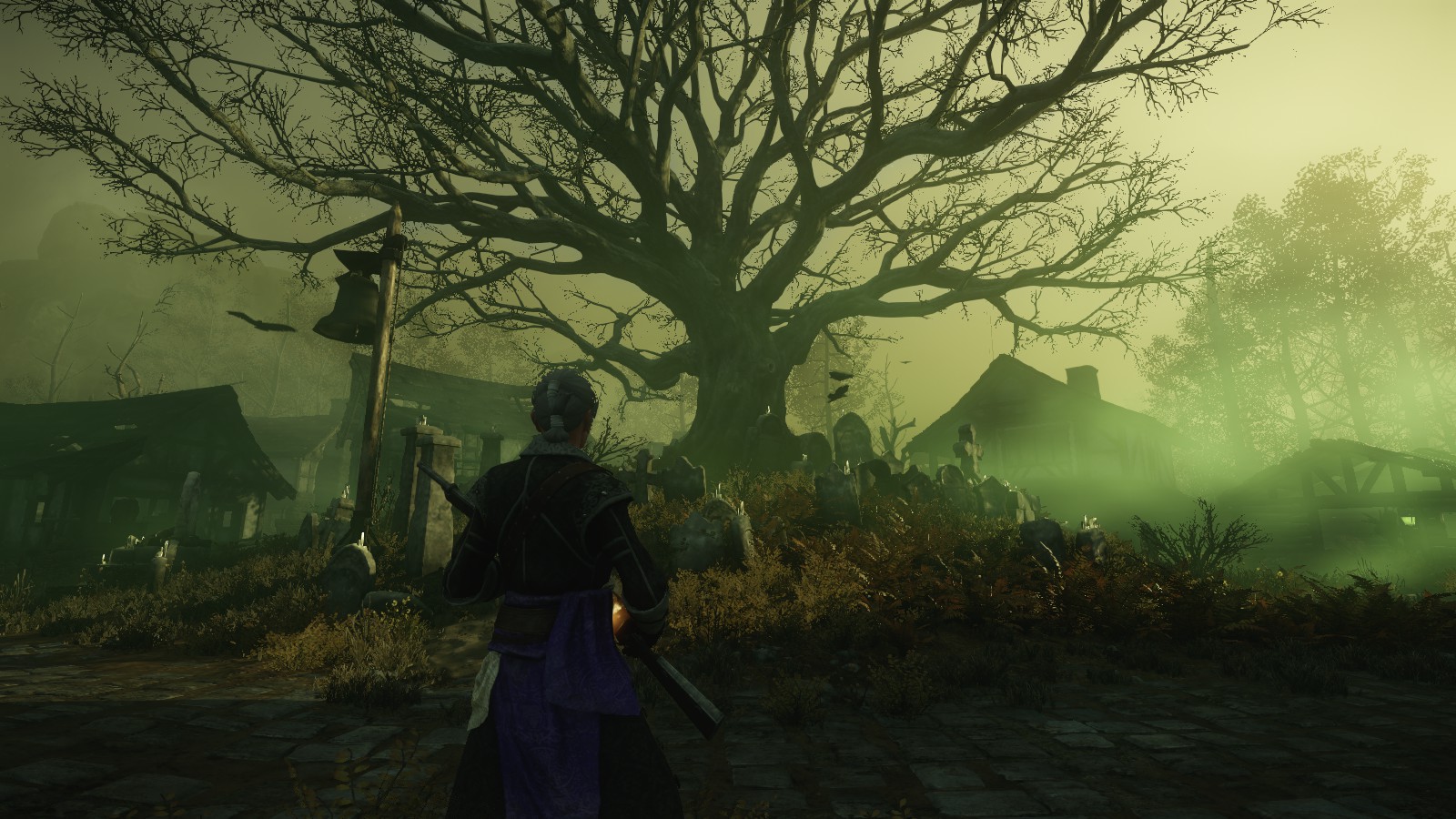 All that said, if you’re judging the quality of the story based only on the quests, you’re getting only about half the picture.

Much of the game’s best storytelling comes in the form of the random notes you find scattered around the game world. Some are forgettable filler, but some contain gripping standalone horror stories or essential lore revelations. Want to know why this game doesn’t have mounts? That’s in the notes (the in-world justification, anyway).

To really understand what’s going on in the land of Aeternum, you need to put together the pieces left by the notes, the side quests, and the main storyline. And maybe that’s why so many people are so down on the story; this is not a story the game just hands to you. It’s something you need to assemble for yourself. If you’re not actively looking for it, you won’t find it.

It’s not something that I’d want to see in every game, and even here I wouldn’t call it an unambiguous win, but it does kind of make sense for this setting. You’re not someone who grew up in this world. You’re a lost sailor washed up on the shore of the island, and you’re struggling to cope with your new reality. Having to fill in the blanks yourself fits with the game’s themes of exploration and self-sufficiency. Aeternum is a puzzle to be solved.

And once you start putting the pieces together, you realize there’s a pretty fascinating story here. Or at least fascinating lore. As in Grim Dawn, I’d draw a distinction between plot and lore. While the gulf isn’t as extreme as in Grim Dawn, New World does definitely have better lore than plot.

I don’t want to get too far into specifics for fear of spoilers, but the picture that’s coming into focus for me is that New World‘s story is an in-depth meditation on the psychological consequences of immortality. And that’s a really cool direction for a video game to go. 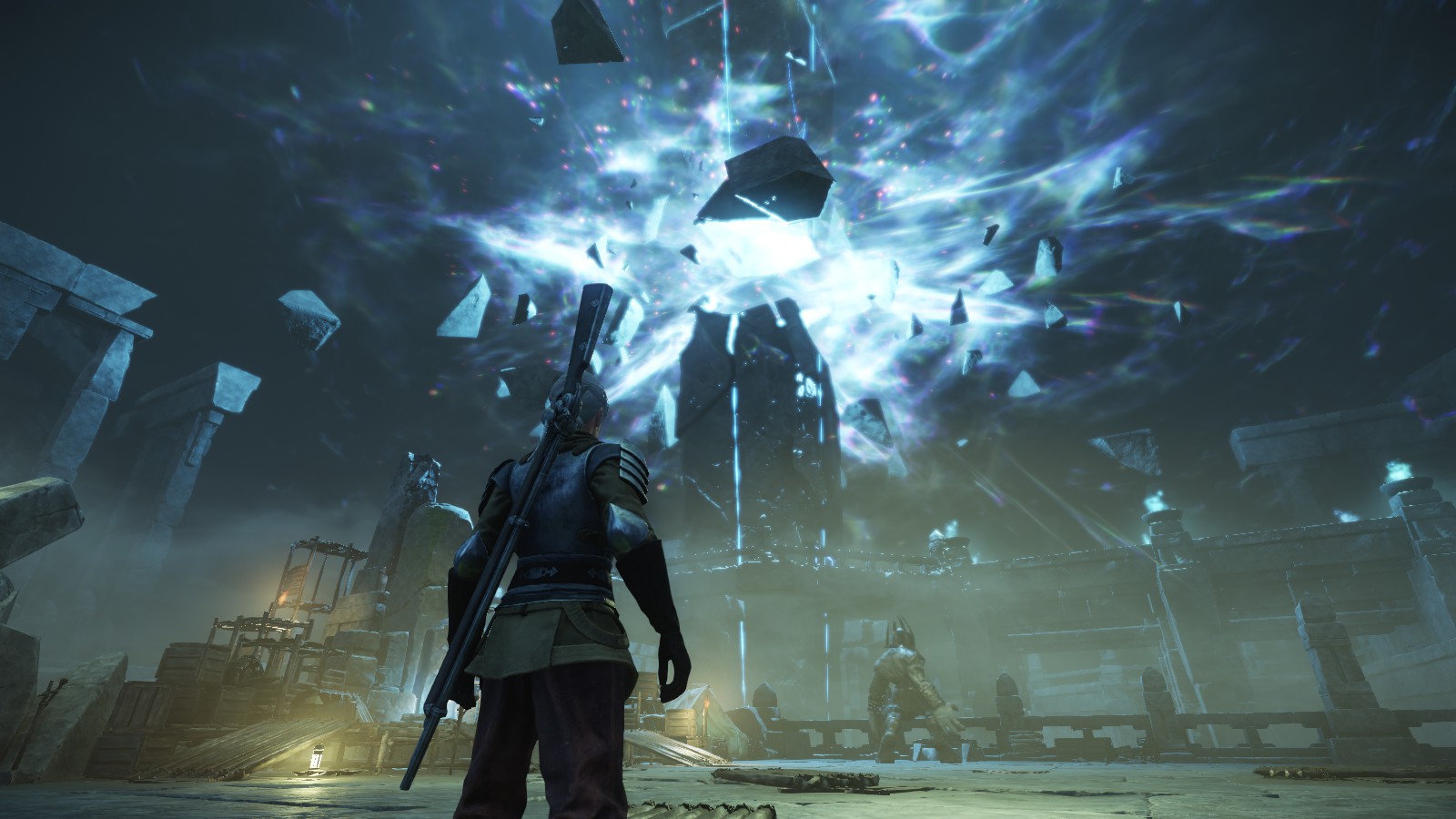 Something else that I appreciate about New World‘s setting is the way it can combine elements of real world culture and mythology from all across recorded history. Although not nearly as deep, it does call to mind the eclectic mixes of source material we saw in The Secret World. I had a moment a few weeks ago when I realized my 17th century explorer character was having a conversation with a millennia-old deserter from the Roman legion, and I just thought, “Wow, this is really cool.”

The current version of the game is pretty heavy on colonial-era European influences, but I expect as it evolves we’ll see a lot more representation from other times and regions. We’re already seeing some of this with Ebonscale Reach and the datamined Brimstone Sands zone (already foreshadowed in-game by the above-mentioned character), which combines ancient Egyptian and Roman themes.

It does help that my preferences when it comes to story lean more towards rich settings and high concept world-building, which is also where New World seems to be focusing its efforts. I do appreciate good character-development and engaging plotting — areas where New World is doing more poorly — but I’m more willing to settle for less in those areas if the setting and its underlying concepts grab me.

The feeling I’m left with is that story was not a priority for the New World team as a whole but that those who were put in charge of the story really threw themselves into it. If there’s one complaint about this game’s story I disagree with, it’s the idea that the developers didn’t care. Whoever wrote the lore behind this game clearly cared a lot.

It’s unlikely that New World will ever prioritize story itself to the extent of games like SWTOR or Final Fantasy XIV, but I do hope the studio puts more emphasis on it than it has so far. There is tremendous potential here, and even what’s already there — while deeply flawed — is a lot better than the community at large has given it credit for.