You know that moment in an MMORPG – or even a single-player RPG – where you boot up the game after a long hiatus and then stand there for a few befuddled minutes, wondering where the hell you left off? That was kind of where I ended up when I came back to The Elder Scrolls Online as per the poll from a couple of weeks back. Luckily, however, I was back in a game that almost always seems eager to bring people into the fold as easily as possible.

END_OF_DOCUMENT_TOKEN_TO_BE_REPLACED
One of the things that has always stood out for me in ESO is how easily it can be to find quests, even if you’re in a place that appears to be wholly deviated from the to-do list of quests you’ve otherwise collected. Which is pretty much what happened to me, as I was left standing in a town I didn’t recognize with no obvious breadcrumbs to find. It didn’t take long for me to simply just wander around to find something to do, though, and that something was to help stomp out a plague. 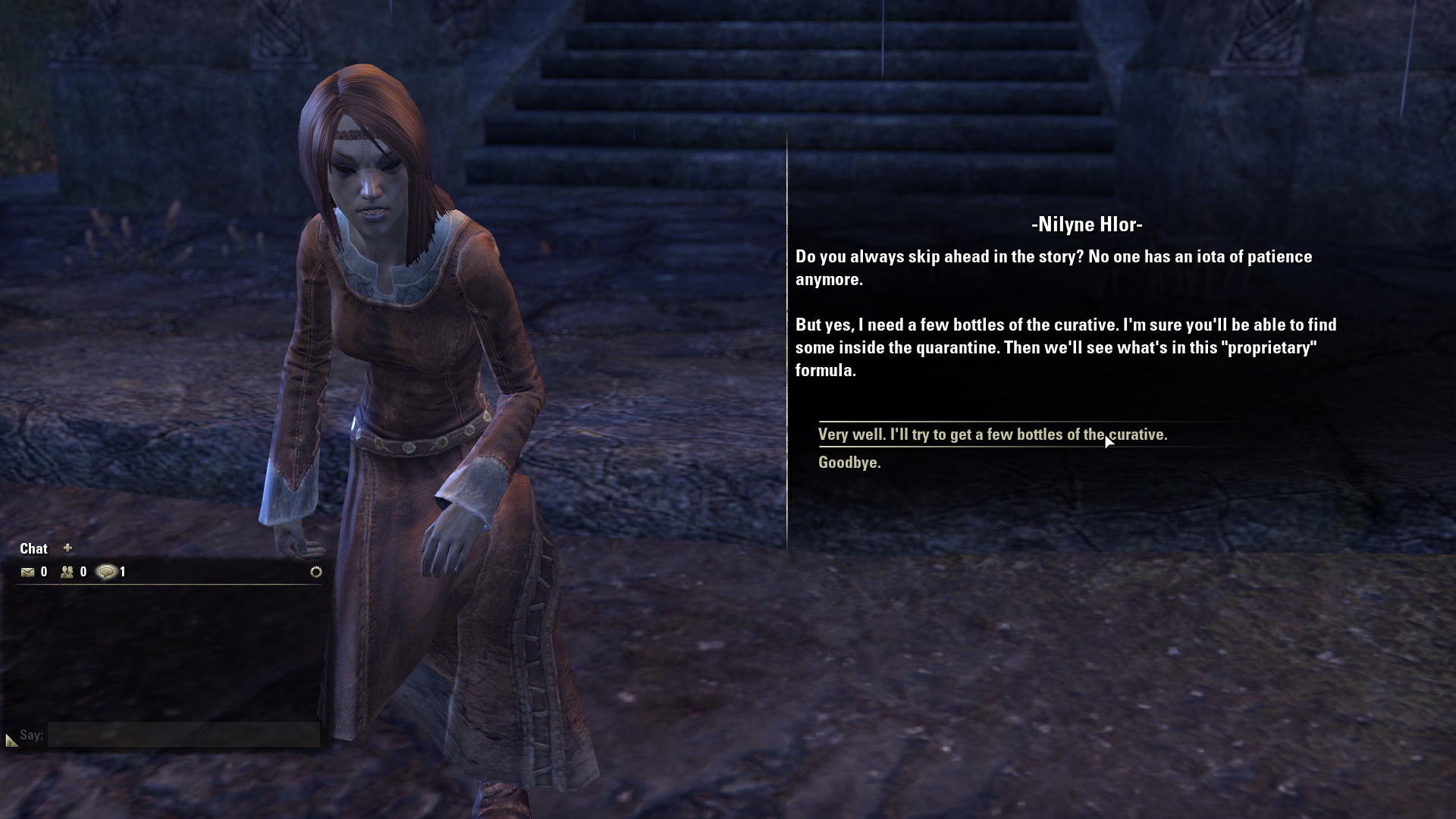 As much as is made about the stories in the Elder Scrolls series, I haven’t really found the main plotlines in ESO too terribly interesting (especially in the game’s vanilla version), but the sidequests that spring up on the compass whenever I was running around always had way more interest to me. They generally were insular and short-form enough that the writing and the tales being told felt a lot better paced and planned out. That’s not to suggest that the writing team of ESO hasn’t gotten better as the game has moved on – I haven’t experienced any of the current expansions’ storylines – but the shorter quests I’ve enjoyed before this return captured my interest far more swiftly.

So it was with this series of quests. The plot points weren’t what I would call mind-blowing by any stretch of the imagination, but it also has that air of enjoying a fun tabletop RPG romp, replete with the whiff of tropes and twists and turns like a kiddie roller coaster. Not life-affirming or astonishing stories, but campy and fun and overall well done. This game’s fun. ESO is just fun. Also, I saw some people running around and absolutely ripping things up out there. I was worried I was going to feel alone, so I’m glad that wasn’t really the case. 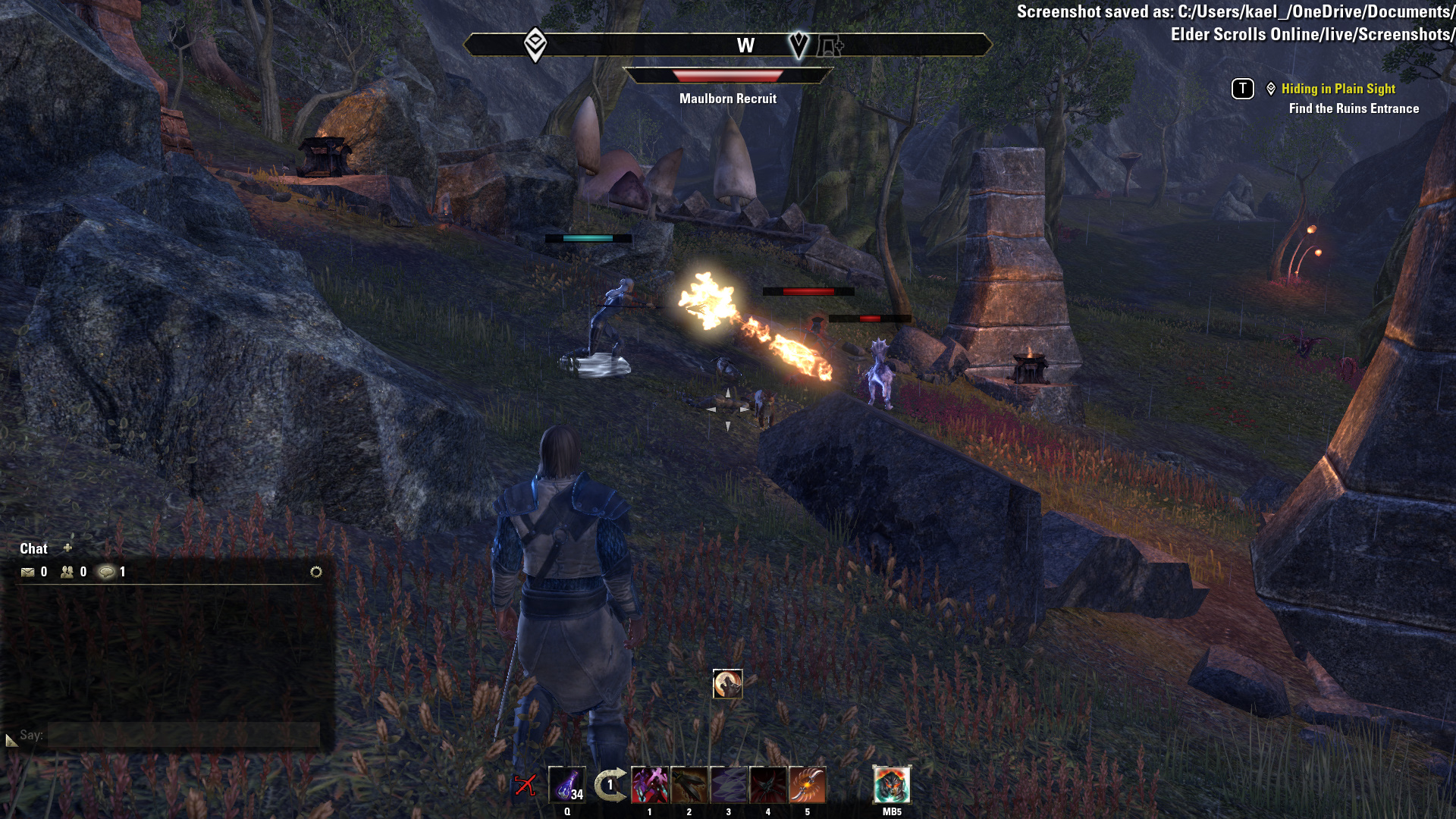 And yes, I still think that fun translates to this game’s combat as well. I never did understand fully why some folks hate the combat model in ESO. Now, obviously there are far better action combat MMORPGs out there, and the Hero Engine will always make animations look kind of arthritic and stiff, I will contend, but considering this is an Elder Scrolls game, I still say that ZeniMax Online Studios did the best iteration of a (let’s be honest) very crappy combat model and made it fit great in a PvE MMORPG mold.

I still enjoy the combo of skills I’ve got and the build I put together, I still feel like a very capable stabby Nightblade, and I still delight in WOLF TIME aka my werewolf transformation; I’m delighted to report that WOLF TIME is still a fun time and makes me feel like the Hulk when I hit that button.

Seriously, guys and girls, I love me some WOLF TIME. To the point that I had forgotten that I had named my character that. 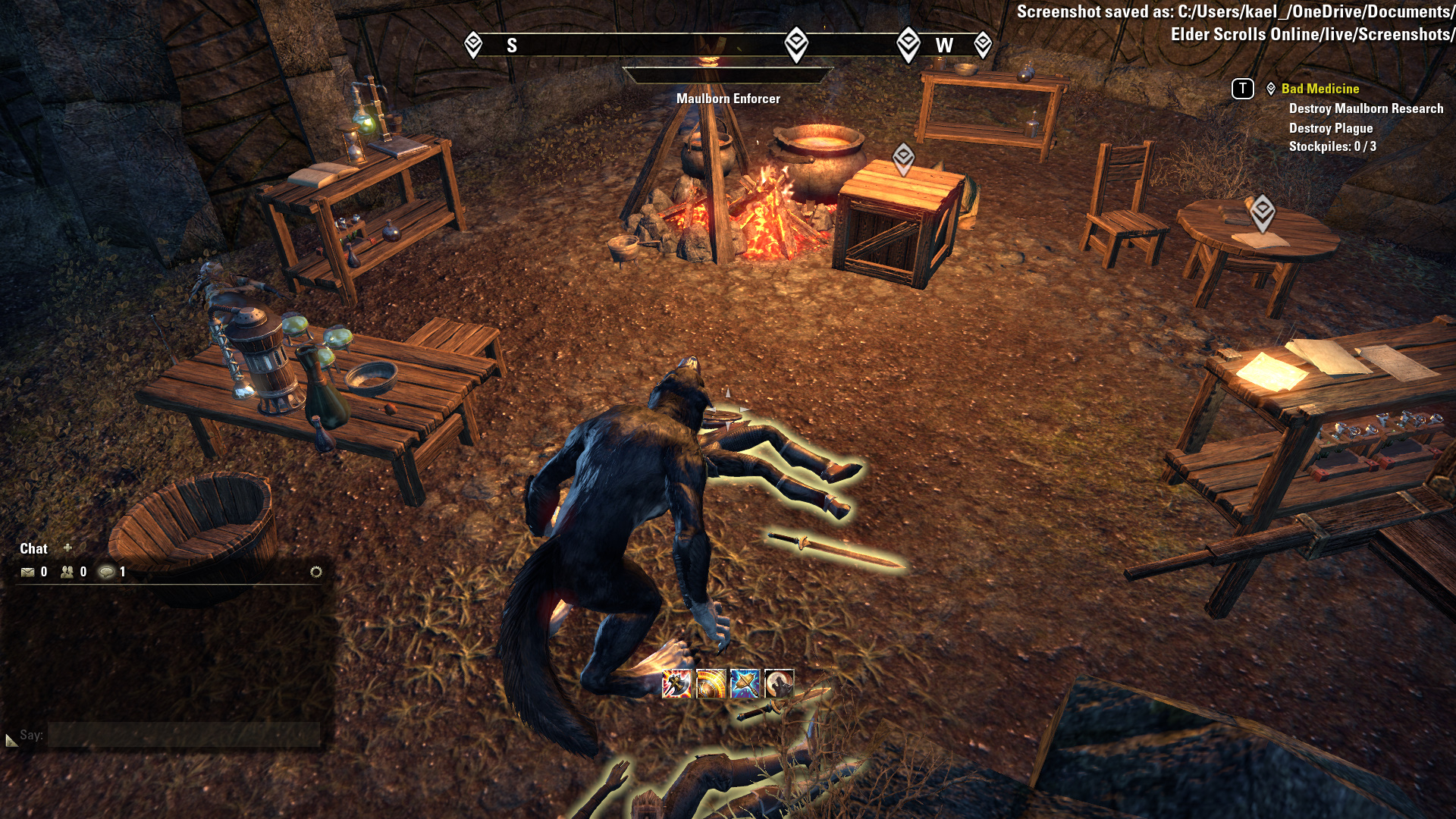 While most of my questing involved thwarting a plague from spreading further, I was also reminded that the one-off sidequests are delightful as well. Helping a pantsless Norn who ended up just being blindingly drunk to the point he lost an axe, or picking up a couple of other quests that ran parallel to the area I was already following just felt good. Yes, it’s still a bit like your usual themepark MMO pathing, but the fact that these just sort of arrive at my feet as I go still makes me feel like I discovered them a bit. Maybe I’m just easy to fool, but it still feels so seamless.

Eventually, I had completed my primary objective, but luckily I didn’t have to wait long to get to my next adventure, which I’m reasonably sure was the introductory quest for the game’s latest Oblivion-themed expansion. Once again, I was being led along by the nose for the most part, but the fact that it all started because an NPC with a whole lot of delicious sass waved me down felt good. Also, I think I want to pick up the expansion and follow through with this tale because the way this whole thing set up definitely piqued my curiosity.

Of course, I could completely choose to ignore that. I did return to the game as an unsubbed person, after all, so the choice of whether to buy in to anything still feels like it’s up to me. Which is nice. Sure, the Crown Store always still feels like it’s flapping its hands at me, but I was also struck by how much adventuring it felt like I had access to regardless.

…but I really want to find out what’s going on in the Deadlands. I’m probably going to resubscribe to this game, aren’t I? 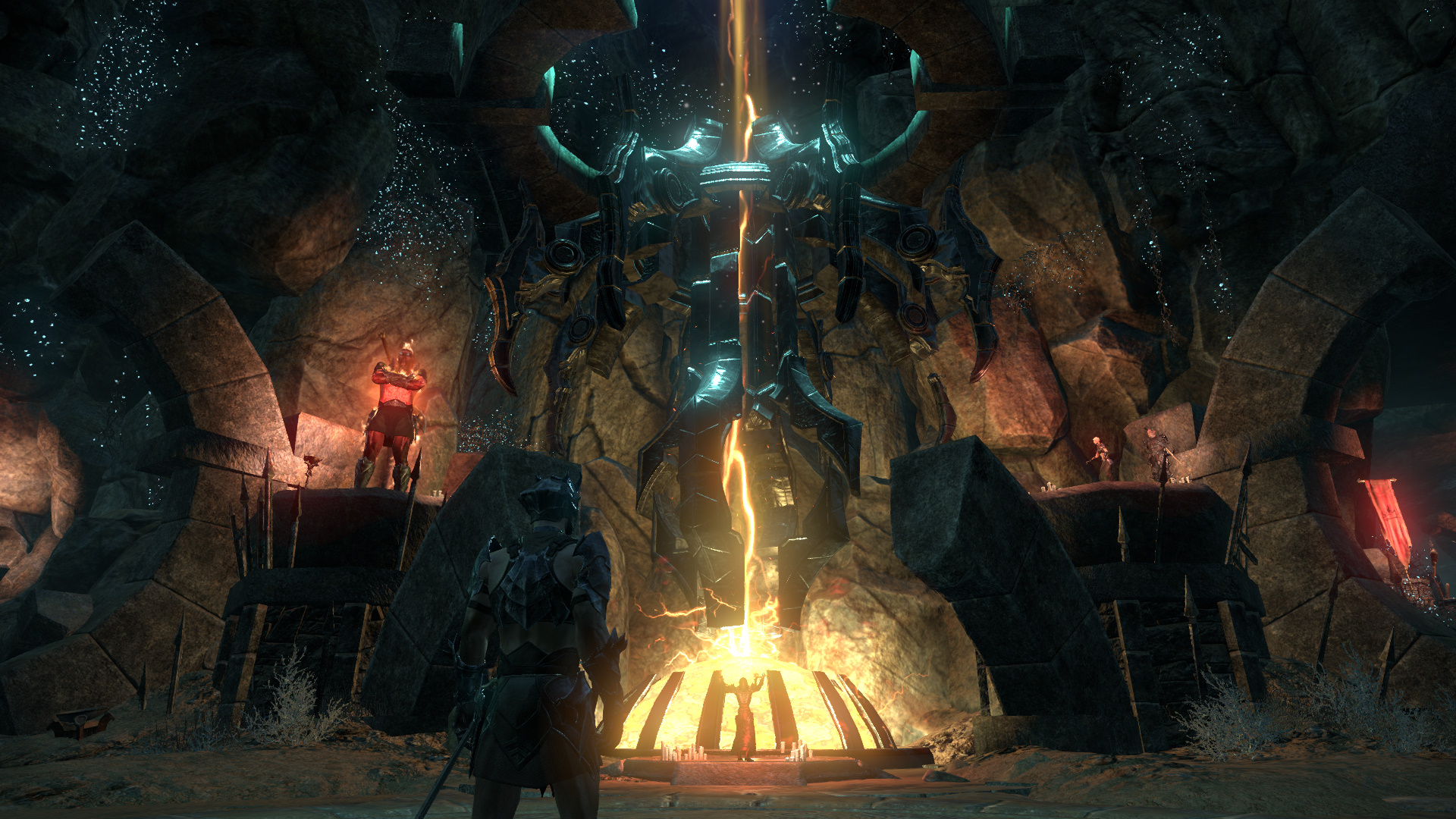 Before I get too fargone in following through with ESO outside of this column, it’s time to once again continue the ride on the retrospective train and revisit a game from CMAs past. As before, this poll choice will be drawing from the last poll, just with ESO removed from the lineup. Unless, of course, you all want to read about what my impressions of the new stuff waiting in Oblivion is all about.

You know what? Let’s call that poll number one:

Should I continue on with a trip through ESO's Oblivion next week?

Of course, poll two will be as I promised, it’s just a question of whether the winner of this lineup will be featured next week or the week after.

What game should we revisit in our CMA retrospective? 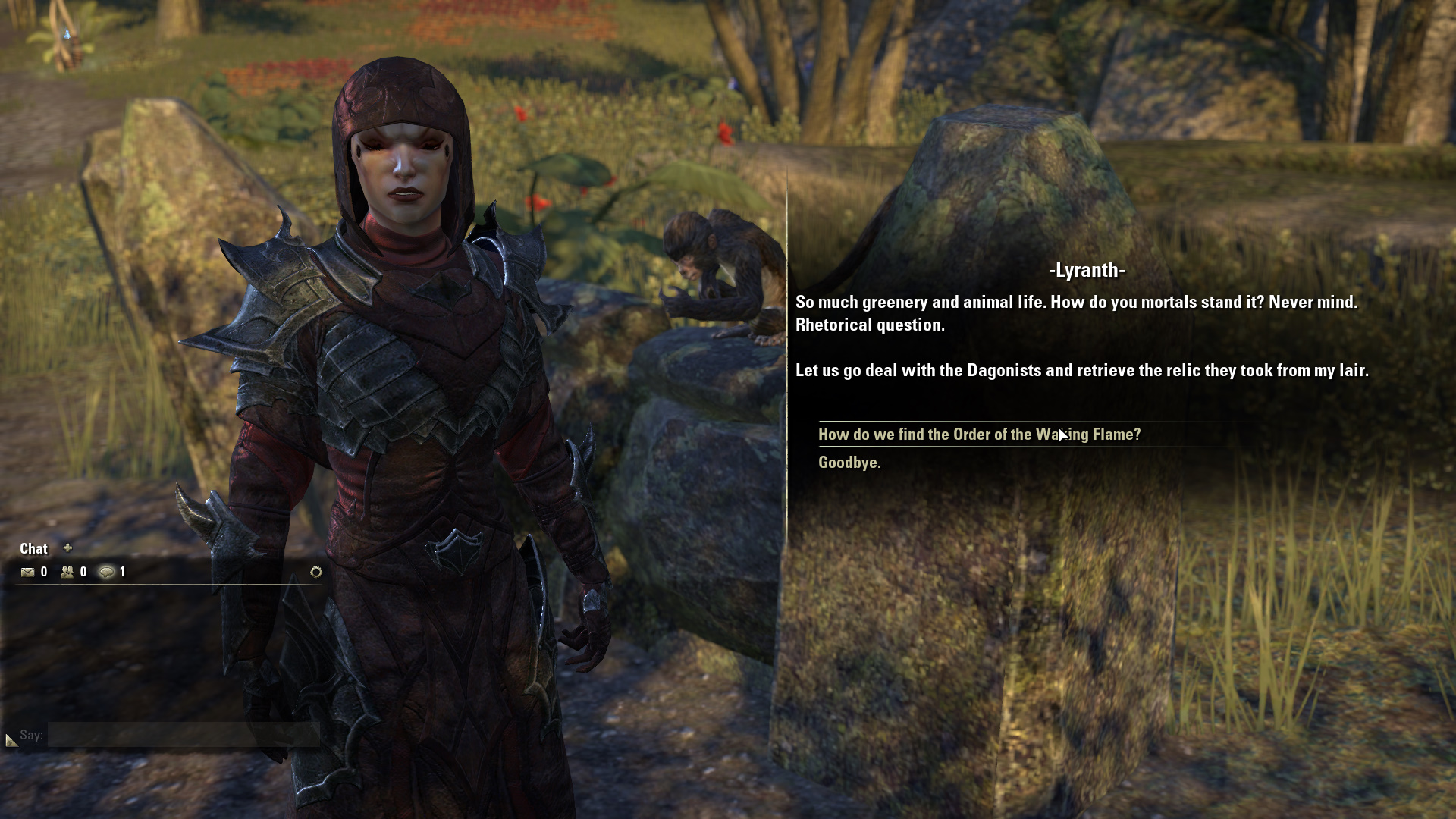 Like usual, polling will wrap up at 1:00 p.m. EST this coming Friday, January 7th. I’ll sit on my hands in the meantime and see how the polling shakes down. Just know that I might still dip my toes back into this pool. For sidequests, you understand.

The Stream Team: Dual Universe launches with a giveaway

MultiVersus doubles the XP required to max out character mastery to...