We’ve long known that Blizzard is working on several new unannounced games, but today, the company has confirmed that one of them is a survival game “in an all-new universe.” The news is part announcement, part hiring pitch.

“Blizzard is embarking on our next quest. We are going on a journey to a whole new universe, home to a brand-new survival game for PC and console. A place full of heroes we have yet to meet, stories yet to be told, and adventures yet to be lived. A vast realm of possibility, waiting to be explored. Every story needs a teller. And every world needs builders. What if that could be you? For thirty years, Blizzard has been creating universes for millions of players around the globe. This requires a diverse team of developers willing to lend their voices, to listen and to be heard. That is our mission. Do you like survival games? Do you want to join a collaborative team of experienced developers at the early stage of a new project in a new world…and help write the next chapter in Blizzard’s story? This is your call to adventure. Will you answer it?”

Blizzard, of course, is still staggered by legal entanglements and culture drama following a six-month sexual discrimination and harassment scandal and series of investigations and lawsuits from workers, states, and federal agencies, not to mention labor disputes and unionbusting attempts affecting multiple corners of the broader Activision-Blizzard conglom, which as of last week is in the middle of a buy-out by Microsoft… all of which might make hiring a little more difficult for the company than usual. 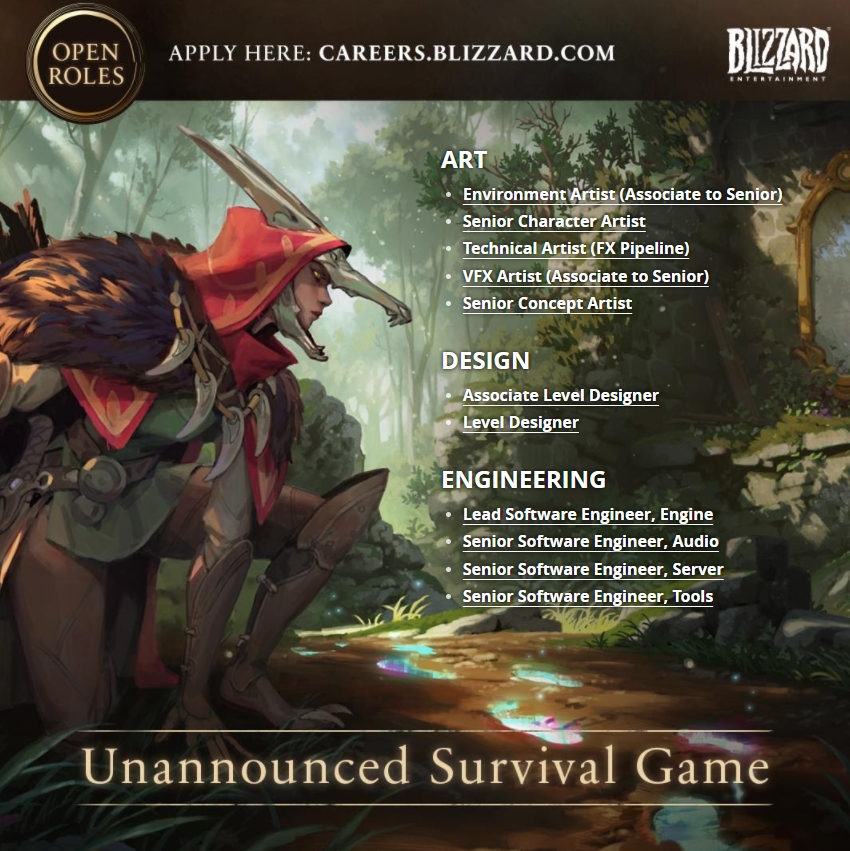 Source: Blizzard
Activision-Blizzard is considered a controversial gaming company owing to a long string of scandals over the last few years, including the Blitzchung boycott, mass layoffs, labor disputes, and executive pay fiasco. In 2021, the company was sued by California for fostering a work environment rife with sexual harassment and discrimination, the disastrous corporate response to which compounded Blizzard’s ongoing pipeline issues and the widespread perception that its online games are in decline. Multiple state and federal agencies are investigating the company as employees strike and call for Bobby Kotick’s resignation. As of 2022, the company is being acquired by no less than Microsoft.
Advertisement

Riders of Icarus, which topped a million players six years ago,...