Global Agenda has long been a lament in the sliver of the MMO community that loved it. It was a Hi-Rez Studios free-to-play MMO shooter that rolled out way back in 2010, and at one point it was supposed to get a sequel, but it was taken offline in 2018; we wrote back then that it “wasn’t so much canceled as it was ignored out of existence,” Hi-Rez took it off Steam and then admitted it “did not survive a multi-game internet center move/upgrade.” It was essentially dead.

Then last year, we got a pinch of news that suggested Hi-Rez might be working on a sequel, or at least saying so in order to keep its trademark alive.

And now… well, who saw this coming? The game’s Discord flew to life yesterday as players realized that the server was up, and in fact, it’s got your old characters too. Apparently, you can hop right in if you still had your Steam install intact with your original account deets, and if you don’t still have it, you’re going to need to try one of the multiple ways listed in the Discord’s install help channel.

Hi-Rez’s Stewart Chisam confirmed that Hi-Rez had got it back up and online, though it was apparently intended for an internal crew, so it’s not clear how long it will be available for players. “We duct-taped together a Global Agenda server on a potato server (no small feat) for a small test and somehow people found it,” he says. “Made for a nostalgic evening :) Was a great game.”

According to one of our tipsters, Chisam logged into the server last night and told the group of 100-odd players that they weren’t supposed to have found it but that the studio would keep the servers up as long as it could.

Maybe if you show ’em it’s wanted, they’ll invest a bit more than a potato to keep it around!

We duct-taped together a Global Agenda server on a potato server (no small feat) for a small test and somehow people found it. Made for a nostalgic evening :) Was a great game. pic.twitter.com/MbyDgpMJ4I

Mad props to Grillbs Agent, the player who figured it out! 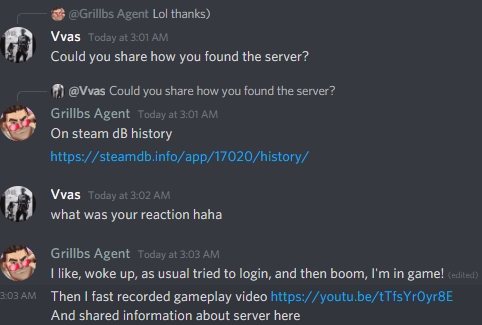