I’m still searching for a survival game that fits me. I enjoy a lot of the survival experience, but the games as a whole never really deliver what I’m looking for. Enter V Rising, a new survival sandbox with the twist that you are playing an ancient vampire come to retake their dominion over humans (and other vampires).

Developer Stunlock Studios was kind enough to offer press access prior to today’s early access launch, and I took the opportunity to get the game’s measure. It was my hope that this would be a genuinely fresh take on the genre, not just a latecomer “me too” survival title.

Unfortunately, that isn’t really what I got. There’s some interesting flavor to the opening sequence of the game, as you claw your way out of your coffin and begin harvesting local skeletons for their bones, but upon venturing out into the world, you’re back punching trees and rocks like you would in almost every other survival title.

There are some fresh mechanics around the fact you’re playing as a vampire. For one, you really want to pay attention to the day/night cycle. At night, you can roam as you will, but by day, you run the risk of taking massive damage any time you venture into the sun for more than a few moments.

That doesn’t mean you can’t move by day, but you do have to be careful. It’s only direct sunlight that hurts, so as long as you stay in the shade, you’re safe. Luckily, like any good gothic horror setting, the world of V Rising is blanketed in dense, gloomy forests that offer plenty of darkness even by day.

The detection of shade versus sun is quite intelligent. You need to be careful about going AFK because the movement of the sun can bring deadly light to a once-shady area. It’s definitely one of the more interesting environmental hazards I’ve seen in gaming, although I imagine dodging the sun could start to become tiresome if you spend a lot of time in the game. 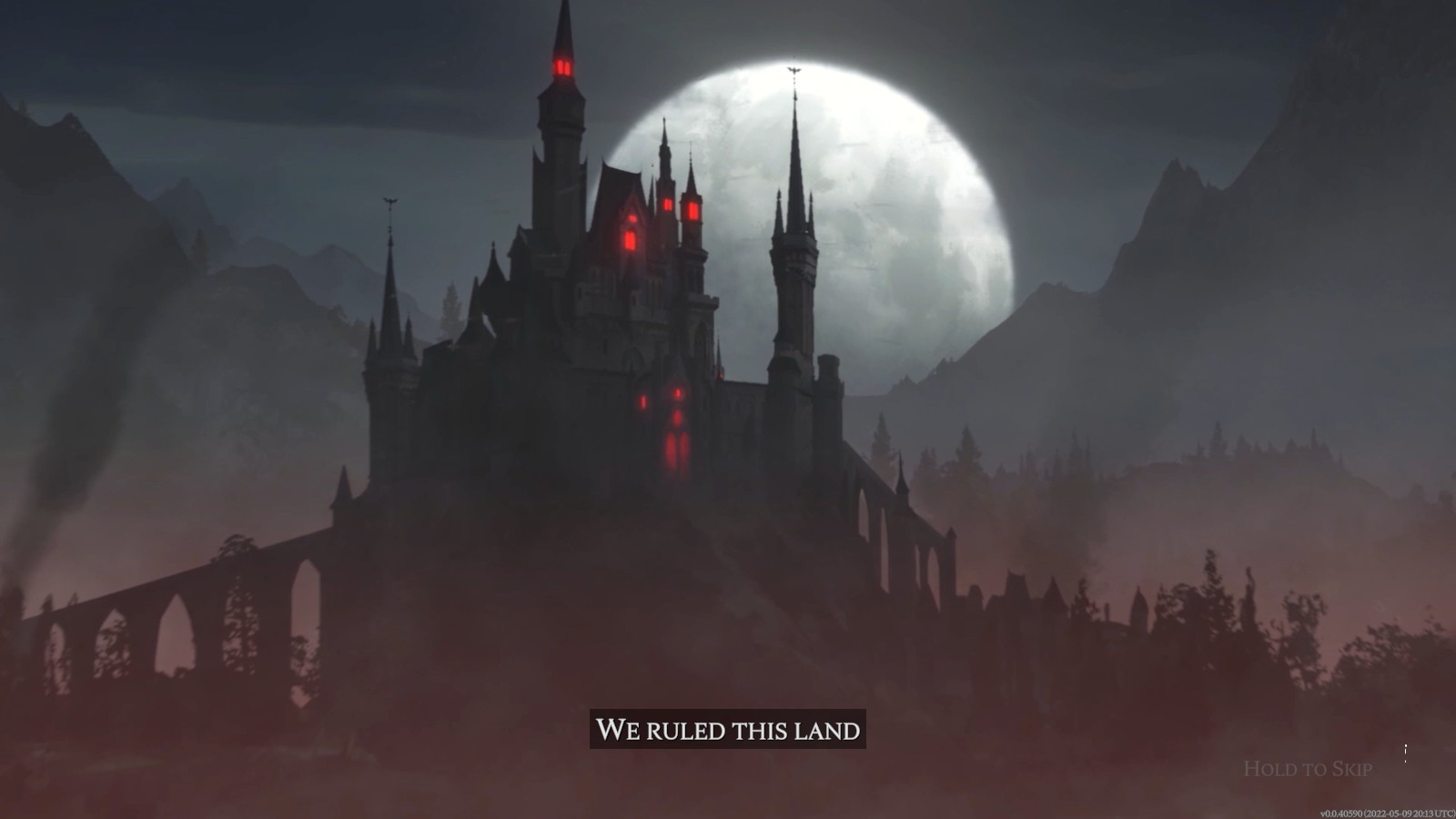 In place of the usual hunger and thirst meters, you have only one need to fulfill: the need for blood. Your blood drains naturally over time, and can be spent on some abilities, like a self-heal. The quality of blood also matters; you get increased stats if you drain the blood of more powerful creatures.

This is again a pretty neat idea, but the reality is these mechanics that put your vampiric nature front and centre feel like a pretty small part of the game. Most of the time you’re just chopping trees, breaking rocks, and crafting gear the same way you would in any other similar game, and man, is it ever a grind. I know these games are grindy by nature, but it definitely seemed as if it took a lot longer to harvest basic resources here than in other survival titles I’ve played.

Eventually, when you’re harvested enough, you can start to establish your own castle, although at first it won’t feel like much of a castle. Mine was more of a hovel at best. This seems to be the main form of progression in the game; you need the facilities of a castle to craft any but the most basic gear, and improving your gear is the primary means of increasing your character’s power. I’m not why more focus wasn’t put on improving your vampire abilities instead; that would have done a lot to help this game stand apart from the competition.

That’s not to say unlocking new vampire powers isn’t an option. Once I got my base set up, I unlocked one of V Rising‘s more intriguing mechanics: draining bosses of their blood to permanently unlock new powers for my character. A structure in my castle/hovel let me select a target and then track it, creating a wispy trail I could follow to my target; I imagined my vampiress following the scent of blood on the wind.

I love the idea of this, and it’s exactly the sort of unique concept V Rising should be focusing on, but it is also here that the game truly started to go off the rails for me.

It took quite a trek to get my chosen target (a large wolf), and when I got there, I had to wait almost as long for it to respawn, someone else having killed it before me. It was a challenging fight, and I was ultimately defeated.

The waypoints that provide both fast travel and resurrection points are quite few and far between, so I was faced with a long walk back. I was a bit frustrated and had already been playing for a few hours, so I took a break. 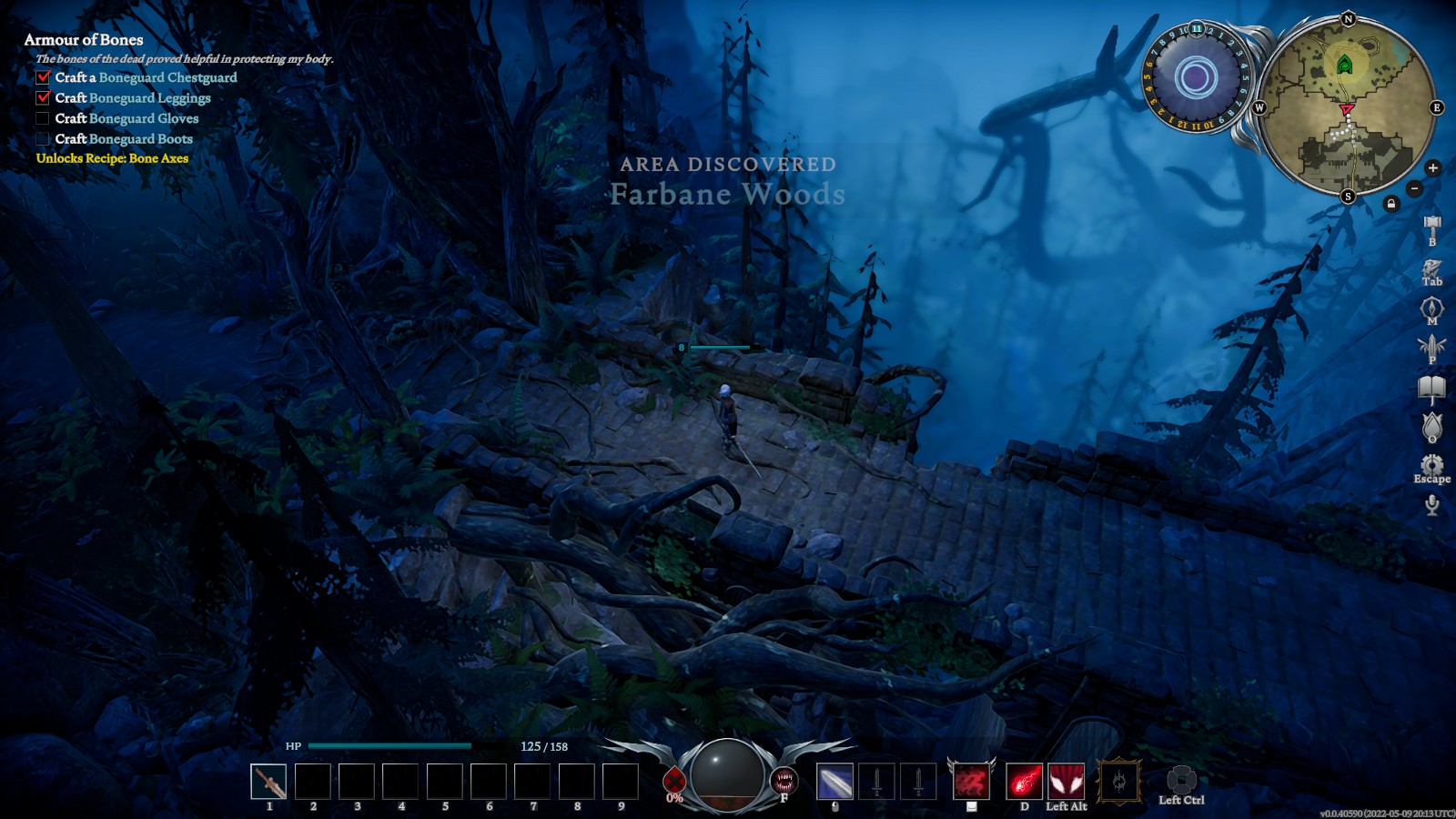 When I came back, it was another long walk and another wait for a respawn, but after about 20 minutes(!), the wolf finally popped back into existence, and with some tweaks to my gear, I was able to defeat it, harvest its blood, and gain a new power: the ability to transform into a wolf to increase my movement speed (essentially this game’s version of a mount).

This was all quite a tiresome process, and the prospect of another long walk back to my base was not appealing, but at least the wolf form made things a bit quicker. After several minutes running through the woods, I arrived and found that my base… was gone.

Despite the fact that I was playing on a PvE server, my base had apparently been stolen only three hours after I built it. I did recall seeing the option to craft an item to steal other players’ castles, but I had assumed this would be disabled on a PvE server. Apparently not.

At least, I think that’s what happened. You see, I couldn’t even get to my base. All three entrances to the plateau upon which it was built had been walled off by sealed gates owned by other players. Each gate had a different owner, but I assumed they were working together. So it is possible that my base was still mine, but there was no way I was ever going to get to it. However, its icon on the map had also gone from blue to red, so I suspect even if I had been able to get to it I would have found it claimed by someone else.

I was already feeling somewhat dispirited at the pace of the game, but this was the experience that convinced me V Rising is probably not what I’m looking for in a survival game.

I think there is potential in the idea of a vampiric survival game, and the moments where V Rising leans in to the vampire mechanics are compelling, but they ultimately make up a small percentage of the gameplay loop. The bottom line is that at least in early access, this is still a very generic survival title, and the best vampire bits feel tacked on as an afterthought.

If you really like traditional survival titles and also enjoy vampire fiction, this could be worth your time, but if you’re looking for something more original, you might be best served to look elsewhere for now.