Welcome back to another roundup of MMO and MMO-adjacent business news.

Embracer – The company that now owns MMORPG studio Cryptic and all its games announced last week that Saudi Arabia’s Savvy Gaming Group subsidiary had put a billion dollars into Embracer and claimed an 8.1% stake. Gamers were not pleased; cries of “gamewashing” once again reared up as players protested Saudi Arabia’s non-democratic politics and humans rights abuse history. Embracer Group CEO Lars Wingefors responded to the uproar, saying that he and the C-suite will continue operating and controlling the company. A lot of the reasons just boil down to fancy words for money; Wingefors argues that the MENA region is massive, that Embracer needs international partners and capital injections to grow, and that this move won’t change the way the company is run. Of course, none of this addresses the key critiques.

Perfect World – Let’s leap right from Embracer to Perfect World, the company that sold Cryptic to Embracer in the first place. GIbiz has a report up on Perfect World’s Chinese branch, which apparently ran an ad for Perfect World Education, a training program that charged students almost $3000 and suggested graduates could “directly join Perfect World.” That isn’t what’s happening, however; graduates appear to be put to work on a multiplayer survival title, and the studio has admitted it can’t guarantee it’ll hire everyone. Perfect World has denied that it’s effectively charging a fee from hopeful workers to work on real games. 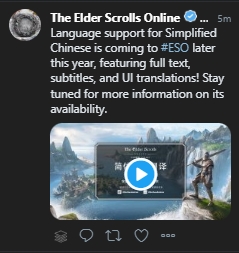 Elder Scrolls Online: Elder Scrolls Online will soon be localized for Simplified Chinese, according to a tweet and video ZeniMax this morning. While the tweet was quickly removed, signaling that it may have dropped early, the initial statement says that it’ll launch this year with “full text, subtitles, and UI translations.”

Runeterra – Finally, we come to Legends of Runeterra, which apparently was hit with a hacking incident this week. Riot’s Dave Guskin tweeted that a third-party developer with access to the game’s API has apparently been providing “tools to automatically scout an opponent’s deck” – obviously cheating when it’s done on the fly. “To be clear on our policy, it’s ok to track your own deck and get broader snapshots of the metagame, but it’s *not* ok to use 3rd party tools to get a competitive advantage like by super-scouting your current opponent in the moment,” he says. The dev has since had his API access and support revoked, so we hope that was worth it.

Perfect Ten: Why World of Warcraft is still worth playing