The first live letter previewing a new patch is always a little weird for Final Fantasy XIV, and this one is especially unusual. See, the thing about the next patch, 6.2, is that it’s deceptively large in a way that doesn’t feel immediately obvious. It’s not unusually large or something that has me over here being in awe at the size of this lad, absolute unit, but it’s bringing in two very new systems in the form of the Variant Dungeons and Island Sanctuary… along with very familiar systems in the form of new dungeons, MSQ installments, and so forth.

END_OF_DOCUMENT_TOKEN_TO_BE_REPLACED
So the challenge with this particular letter is, in short, to provide us with an overview of the familiar and unfamiliar, building hype and giving away hints of what’s coming next while at the same time leaving enough stuff for the next letter and for the actual patch itself. So I am, as is my tradition, going to cover the things that I found most interesting and worth of discussion, including one decision I am already quite unhappy with… but not for the reasons you might expect.

What was said was that the developers wanted to add something similar in nature to Animal Crossing, but I don’t think any of us really expected that meant they would literally just drop Animal Crossing into the game. Seriously, you customize the island, care for creatures, customize your home, assemble special crafts for island-specific currency… this is just straight up Animal Crossing, right down to my half-expecting the NPC leading you here to be a Roegadyn in a tanuki suit named Toumnbrem Nahcthanth.

The two biggest question marks currently in place will be how much players can customize things (you’re building a base of operations, but is it more about order of unlock of prefab buildings, placement of same, architectural style, etc.) and what the “special items” are that you can unlock via gameplay. Obviously the intent is for this to be a more casual and relaxing game mode, so I don’t think the items in question will have anything to do with power – no materia, no glamour prisms or dark matter, and so forth. Cosmetics, pets, adventurer plate addons, and mounts are the most likely rewards.

What also remains as a question is the actual gameplay loop. While we got an idea of the overview of what gameplay will look like here, that doesn’t actually give a very good picture of what the loop looks like. When you travel to the sanctuary, what are you doing? How long can you expect to spend there before your rewards are minimal or nonexistent? What sort of actions are taken beyond just “click on a thing?” I’m not saying there are no answers to these questions, just that we’re going to have to wait until part two to find out.

Since that’s usually when we get the footage of gameplay, this makes sense. But it also feels relevant to keep your eyes open for this stuff when it gets revealed. I get the sense that in many ways this is the replacement for the open field zones of the past two expansions as well as the slow restoration zone. Instead of Doma or Ishgard, we’re just straight-up building a sanctuary out of nothing. That’s fun. 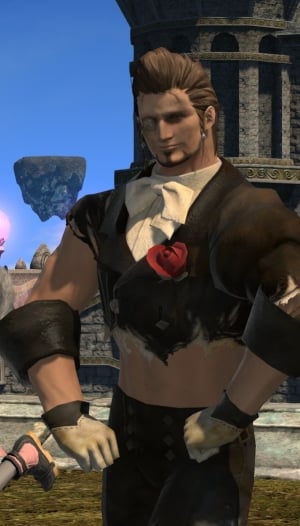 The first is that as this is a game that features a lot of really heavy story themes, it’s important to have a part of the game that is just absolutely taking the piss out of all of that. It is vital for the developers to have a space to say, “Sure, this is serious, but it’s all right to laugh at some of it too, this can be absurd and ridiculous and that can coexist.”

The second is that it actually provides a very important look at stories not centered around Very Important People, a look at what life looks like on Etheirys for a lot of people.

So I am glad Hildibrand is the game. I am glad we’re getting more Hildibrand quests. Even though I still feel like the first quest line was the one that managed to be the most consistently laugh-out-loud funny, I was sad they didn’t show up in Shadowbringers. And I really don’t like attaching them to what look to be our relic weapons.

“Why, because relic weapons are supposed to be serious and this is silly?” Nope – quite the opposite! I like the idea of having a more silly rundown this time. We’ve had a lot of very serious epic relic weapons and it’s a good choice to have one that isn’t. No, it’s because Hildibrand is optional content, and I’m really not super happy with how frequently the team has been turning optional into mandatory over time.

To a certain extent, this is inevitable. If you want to tell more Hildibrand stories, for example, it is kind of important to have those stories rely on you remembering the prior stories. But right after we had relic weapons locked behind the completion of the prior expansion’s alliance raids (previously optional content) and also saw the Crystal Tower series folded into “you must beat this for the main scenario” (previously optional content), we’re getting the implication that Hildibrand quests have also become mandatory instead of optional.

This is not a trend I like! One of the things that I’ve long held up as a strength of the game is how much of it you can pick and choose your engagement with. Yes, there are often rewards held by a network of expected content and, say, not taking part in Alliance Raids is going to deprive you of some important rewards. But the content is still optional if you really don’t like it. You don’t have to do Heavensward relics to make Shadowbringers relics; you don’t have to explore all the old alliance raids if you don’t want to, and so forth.

Now, technically, we don’t know for a fact that this will tie into the quest line. But that sure is the implication, and it’s not one that I like. I reserve the right to change my mind if we find out this is purely about Godbert Manderville and separate from Hildi, but as of now I’m not a fan.

Gosh, every time I think we’re done with the robot stuff, we get more, huh? I figured that we had this wrapped up in the base game, but then we got another follow-up quest, and now we’re going to help them gather some sticks. (Disclaimer: There may not actually be a quest about collecting sticks.) It feels really weird, on some level, as if this plot space just keeps growing larger and larger.

On some level I think this is all just gilding the lily, so to speak. After all, the point of Ultima Thule is that these remnants of worlds were living in the aftermath; why are we wasting time shepherding them and making them feel better when much more material concerns were going? But the more I think about it the more I feel like that thinking is wrong, and while that may be the point of Ultima Thule it’s also missing that the larger point the game is trying to make is that the entire philosophy of this zone is wrong.

The whole philosophy is that these are places with no hope, no reason to go on, and no cause to try to rebuild. And the game’s story – not the subtext, but the explicit text – is all about how that assumption is wrong, that there are places to go, that even in the abyss there is hope. You win by espousing just that philosophy. And if you can keep building that up by fetching some sticks for some robots, I’m all for it.

Feedback, as always, is welcome in the comments below or via email to eliot@massivelyop.com. Next week I think I’ll keep on this particular kick and talk about Variant Dungeons and the Savage changes for the next patch.