So we’ve all gone through the recent news about Splatoon 3, right? No? Well, don’t worry. A lot of the presentation seemed to be aimed at newcomers to the whole series, with merely kernels of new info in there for vets willing to sit through it all. The official site tried to do a roundup of the Nintendo Direct presentation, and it’s decent. The more visual version helps too, no doubt. But even for someone who experienced the first two games, both of these are still a lot to wade through.

And there was even a bit for MMO players, like the line about the “Epic Finale” for story mode and all the multiplayer stuff: new customizations, further PvE support, and possibly a new multiplayer mode. I don’t want to jinx it, but it seems like at least half of my wish list has already materialized in some shape. Let’s dig in to the highlights! 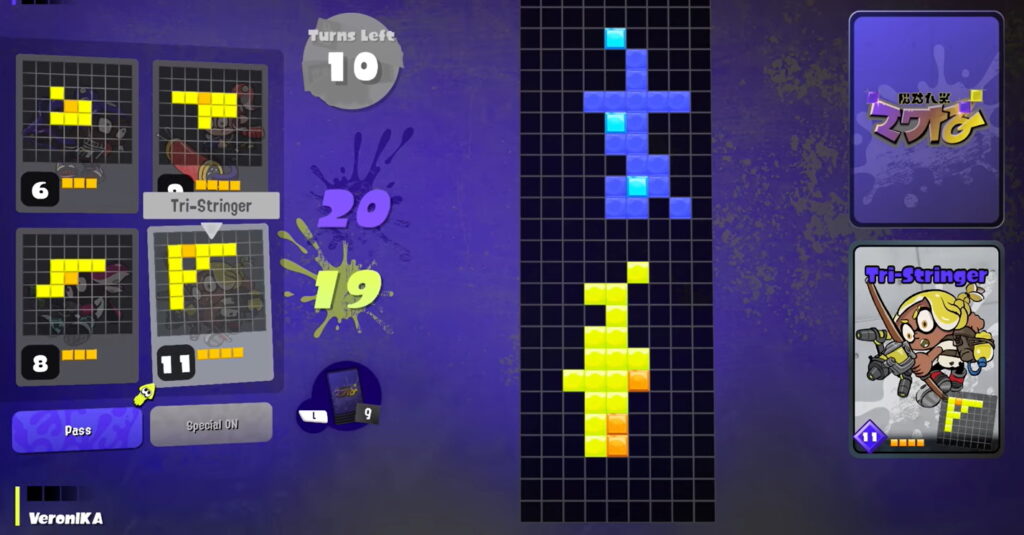 I don’t know about you guys, but I never saw this coming. While they’re not inherently an MMO, online TCGs are a big weakness for me (RIP Hex). Having it as a minigame in-world, akin to the one in Star Wars Galaxies, is going to be trouble for me if we can play other people. See, there’s no word yet on whether it’s 1v1 PvE only or other human players can play each other, but a future announcement should give us more details. I half wonder if it may be more than 1v1 when other humans get involved.

All that being said, the fact that we’ve had a few MMOs with in-game card games or being MMO TCGs seems to indicate there’s space for this in the MMOverse, so hopefully we get more details on this soon. 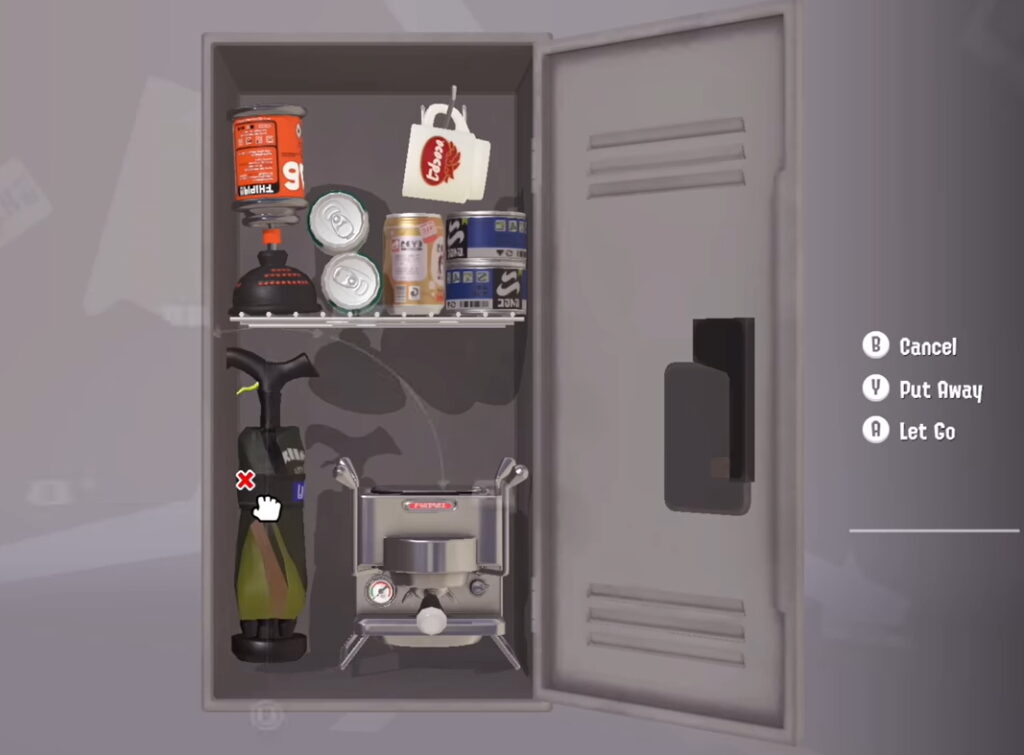 It’s not housing, but it does make some sense as mini-housing, given that we’re squid (and octopus) kids, and it does what many games’ housing does in terms of multiplayer use: shows off your trophies and style. It would be nice if we could have houses for mini-battles against friends, but this is a step up from nothing and furthers the style-side of the game.

I don’t think there’s an MMO player out there who would be satisfied with a game simply being dropped into the wild and never updated. Updates coming every three months for two years does make it sound like these will be “seasonal,” in that fall would have Halloween costumes and winter will probably release snow and Christmas stuff (sorry, Southern Hemisphere folk!), but we know that’s not all.

A lot of the reveals noted future updates, such as hashtags (called “keywords”) to create what seem like virtual chat rooms (though remember that official voice chat in Splat games requires a phone app). There’ll also be “X Battles,” a kind of high-end (requiring Rank S+) solo queue.

We’re also told that the team plans on having “large scale, paid DLC.” Splat 2 was the first in the franchise to do this, though it was restricted to a new story mode that unlocked an octoling avatar option. It was a nice little bonus, but the Nintendo Direct reveal mentions it after the X Battles introduction, which may hint that DLC could be multiplayer-based. We’ll just have to wait and see how that goes. 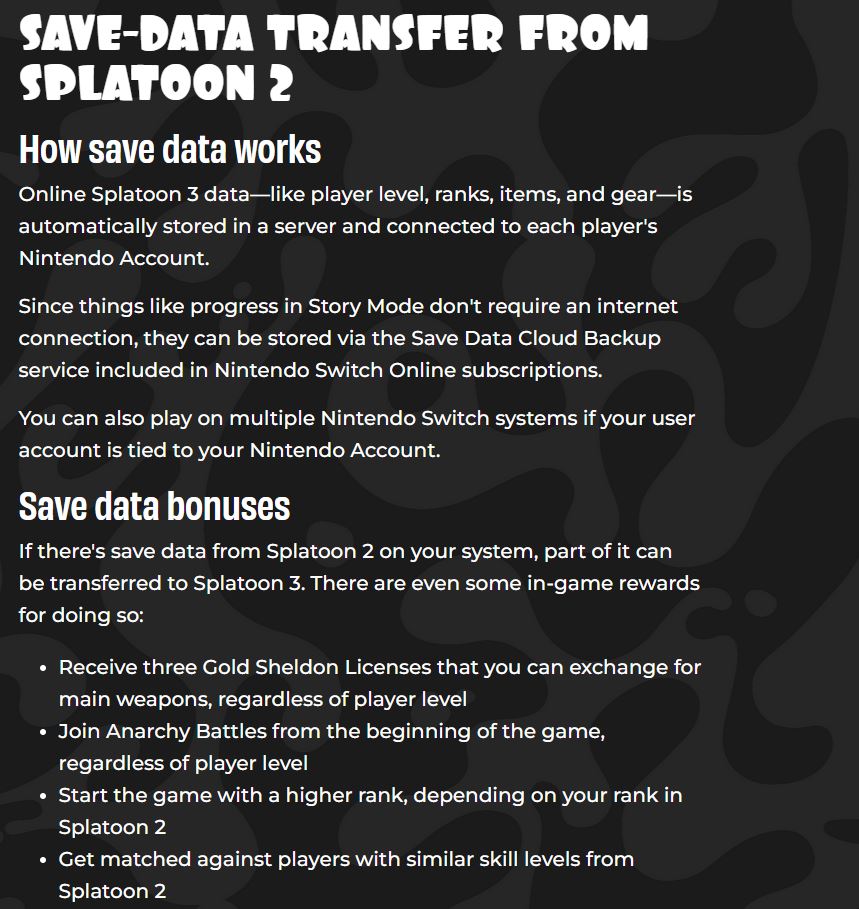 This is where we get to the meat. Splat 2 vets get access to weapons faster than new players, plus maintain their ranks. Note that “Anarchy” is the new name for Ranked matches, probably because there will be multiple types of ranked matches, as we noted above.

In some ways, the data transfer almost makes Splatoon 3 a really big game expansion, but I won’t split hairs about that (today). What I will say is that it was a bummer that I previously had to re-earn weapons sets I’d used forever in Splat 1 for Splat 2, so it’s good to know I won’t have to suffer through that again. No, it’s not quite as good as how Overwatch is transferring to Overwatch 2, but Splat also doesn’t do micro transactions. Splat 3 will probably have differences between the last games’ weapons and level balance, but it’s still a good way to reward vets, especially combined with the access to ranked matches from the start so as to not to have vets completely stomp franchise newbies.

However, just having updates itself isn’t what’s exciting. When connected with the data transfer, it helps make the game feel a bit more persistent. I don’t like using this term lightly, but Nintendo’s cross-game carry-over features (like Amiibo being usable across multiple games, save data from one game unlocking bonuses in another, and the whole Pokemon Home situation) put Nintendo up there with Blizzard in having what some might describe as a metaverse. That’s an important distinction I’ve made in the past, as even experts note that there may not be a singular metaverse, and I think seeing Blizzard and Nintendo not only doing crossovers but carrying over data between titles is important.

I have to admit, though, that the data carry-over could be a hint that Nintendo is finally seeing value in allowing players to bring over at least some of their past achievements to new games in order to secure player retention across titles. The system-wide friends list has kept me connected with players I’ve never actually spoken to since the Wii, Animal Crossing allowing design carryovers means I’m still running a flag I first designed in 2010, and some of my Pokemon traveled with me through several game titles, sometimes on different platforms. Having something similar to that in the Splatoon universe would be awesome.

While PvP is still just for eight players via 4v2v2 battles, the idea of turning part of Splatfest into a bigger faction war is super interesting. Splatfest is now based on three options instead of two, with the first theme being Rock, Paper, or Scissors. Apparently, the team of four will be the current champ, so if team Rock is doing the best, they’ll be the team of four, while the other are teams of two. Rock has to defend the “Ultra Signal,” as losing it spreads ink from whichever of the other two teams activates it via “Sprinklers of Doom.”

It’s a nice concept at the least, though it would be nice if it could be expanded into a 4v4v4 mode. Good thing there are updates and DLC coming, right? 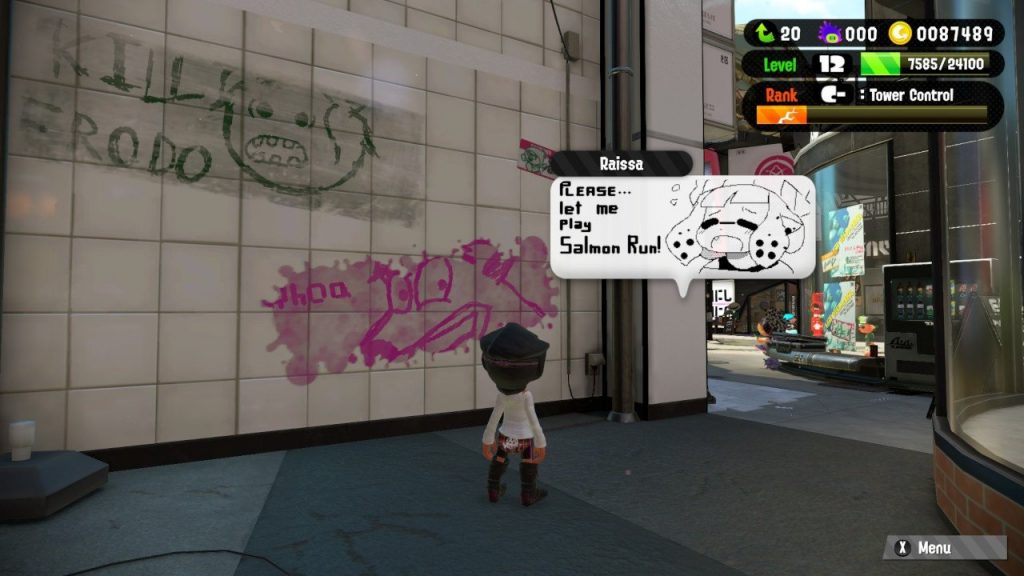 No, I don’t mean story mode; I mean Salmon Run, the tower defense-like mode players wanted 24/7 access to since Splat 2 launched, as seen in the above image. I’ve heard from several readers who enjoy the concept or image of the Splatoon franchise, but they don’t want to do the PvP portion, and I get that. It was disappointing that Splat 2 didn’t give access to Salmon Run all the time at launch, so fixing that make the franchise feel much more open.

It doesn’t end there, though. Sometime in the future, the game will add “Big Runs,” “an event when Salmonids invade the city in which Inklings and Octolings live.” There’s no current information on that, and it could be as simple as a new map based on the city. However, it would be nice if it expanded Salmon Run’s player participation (four) to something a bit more, or maybe even allowed players to design a personal city layout in preparation for said runs. Again, we don’t have additional information on this feature, but it does show additional multiplayer PvE commitment from the Splat devs, so our PvE readers will hopefully feel more welcomed in the franchise.

Sadly, we still can’t simply hang out with friends around town in Splatoon 3, but we’re getting closer via Ghosts, holograms of our characters that can actually show how we’re moving about during battle or what activity we’re looking to do (and allow friends to jump in). It’s not even sounding like Animal Crossing islands yet, but it sounds like a step in the right direction, especially once the Hashtags come into play.

Pessimistically speaking, I might argue that Ghosts are essentially a slight upgrade over the text version of a friends list. However, I’d also argue that Nintendo moves slowly, and any change feels like a step towards something bigger. Look no further than the Animal Crossing series (which shares a lot of staff members with the Splat team), which went from needing fansites, friend codes, and opening multiplayer, to basically just social media and opening multiplayer (as the system that opens multiplayer also grants a code, simplifying the process), making it massively more accessible.

We’ll see how much the hashtag update or possible DLC changes things, but at least at launch, this sounds like a big difference at least for series vets. I already have a big friends list with many Splat fans, but scrolling through it in-game can be a pain, especially when no one else is on. Simply entering a virtual room to see who’s on and what they’re doing saves me several menu jumps, and it sounds like it’ll be significantly easier to connect to them.

Obviously there’s more for some people to get excited about: new ways to move, new clothes, new stats, new weapons, and more, but these systems and features really stood out as ways for Nintendo to open the series up and make it feel more multiplayer. Splatoon has always felt like fun virtual world that could be made more persistent, at least in terms of the lobby, and a lot of these changes feel like they move the series towards that.