One of Star Wars Galaxies’ oldest emulator projects bid farewell to a long-running test server this past weekend. SWGEmu announced that it took the Basilisk shard offline as part of a service provider change that’s in the works. A requiem was held last Friday to mark the passing of the world.

The Basilisk server “started with very minimal features” as a replacement for the Liberator server but gradually grew into a fully fleshed-out world. 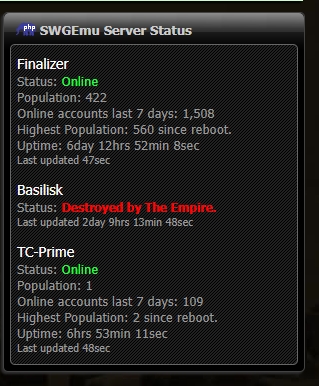 The rogue server team explained that the decision was made as part of a “complicated” move to a new service provider. As current donations don’t cover the cost of running all of the worlds in this new environment, Basilisk was sacrificed for the greater good.

“You have been a good server for us,” the team said in memorial. “Through thick and thin! Many bugs and exploits have you helped us with. Many players through the years have called you home. Countless of hours have been spent on crafting, looting, exploring, battles and skirmishes. Love and hate, drama and agreement. The server [has] had it all!”

Of course, players of this classic rogue server were urged to move to the Finalizer server when it opened under the SWGEmu banner just about a year ago, so hopefully there won’t be too many tears shed here.