If you’ve been following anything about Camelot Unchained, then you get the idea that Mark Jacobs has set out to make something different than what is currently in the MMO market. That difference shows in the upcoming game’s leveling system, which is accomplished via realm rewards in RvR. The ability system is unique, focusing on crafting new and different skills instead of just letting players acquire more powerful versions of the same ones. At DragonCon 2016, Jacobs was joined by more of the City State Entertainment crew to dive a bit more in-depth on these two systems as well as touch on some other features. Couldn’t be at that panel in person? We got the scoop for you. 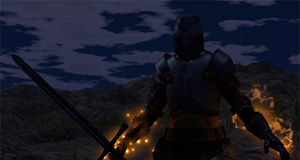 In regard to abilities, the new system is unlike those in games that give more powerful versions of spells as you level. Instead, this system is more about adding additional spells to your repertoire. The idea is that you increase the number of different tools at your disposal, not get flashier versions of the same few tools. It’s like adding to a Swiss Army knife so that you ultimately have the right tools at your disposal for individual situations. Some abilities will be great for one thing; others may be the worst thing you could do.

Players will get the components (runes) and then have to put them together as they desire to make their skills. Co-founder and Technical Director Andrew Meggs said he expects to see a large variety of builds as people will be focused not on getting the “best” spell but rather on going for the best one for a given situation. Someone one a higher experience level can indeed be put down by another if the lower level uses his skills better. He explained, “You might out-level somebody by a lot, but your basic I’m going to whack you isn’t massively more powerful than theirs. It’s a question of, can I figure out the right way to whack you to get an advantage in this situation?”

With this horizontal progression, Mark Jacobs says that players will definitely be able to jump in and still compete even if they come to the game later. It also means that those who play for 90 days won’t be nearly as powerful as they’d become in other games. “This is a very slow-leveling progression system,” he explains. “And not slow because it’s grindy, just slow because you will not get as powerful as you think. You’ll get new abilities, different abilities. You won’t be going from a fireball that can kill a rat to a fireball that can take out the earth.” Instead, you will mix things like a fireball and a waterball that will then make steam.

And one last word on all the spells in game: They will interact — not only with spells but with everything. If a fireball hits a waterball, then steam will be created. There are myriad possibilities and applications. All those projectiles are precisely as their name implies: projectiles. All the spells, abilities, and projectiles are physics-based projectiles, which means they can be interacted with, combined to work together, blocked, and so on. 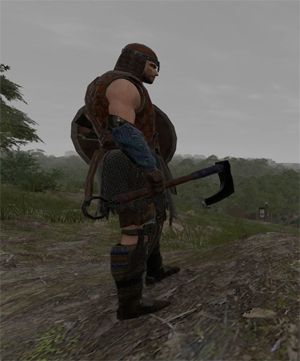 Jacobs emphasized that that only way to level in Camelot Unchained is through RvR. That does not mean that is all there is to do (we’ll get to that in a bit), but it is the way to advance; there is no experience gained for killing mobs in this game. So how does one gain experience if not through questing or from mobs? For that answer, think back to tabletop pen and paper campaigns.

Jacobs explained how experience will be distributed via realm rewards. You know how the DM would tally up experience at the end of a gaming session or campaign and dole it out? That’s exactly what Camelot Unchained is going to do. At the end of every day, the realm rewards will be totaled up and disseminated via a letter from your king.

As the name implies, the rewards are earned as a realm, so how your faction does impacts your reward just as your own personal contributions do. The letter from the king will detail all of your rewards. Jacobs noted, “You can get rewards that don’t even seem to apply [to your actions], but when you think about it, they actually make sense.” He explained that perhaps if while you were out doing your activities, your realm captured some mines or other valuable assets, you will get a cut. Of course, using your own weapon or magic will also allow you to level, but you are also connected to your realm and benefit directly from that association.

Another benefit of realm rewards is offering reward even when you don’t win as opposed to people giving up and leaving. It rewards players for trying to play smart and for trying things even if they actually lose. “At least here, when you try, even if you lose, you are still being rewarded by your king because you tried,” he explained. When an engagement is 3v1, the three will actually be penalized a bit for winning as they had the distinct advantage by outnumbering the one.

As a part of this realm connection, the game will have time-limited campaigns friends/guildmates/people can come together and play as well as more permanent warbands (think guild alliances) to advance their realm. This will foster more cooperation and coordination for better rewards as well as discourage jerkiness since being ostracized from these activities for poor behavior will negatively impact problem players. It’s one way Jacobs says that “this game is not going to be jerk-friendly.” He pointed out that you won’t be able to do things on your own and be as successful, such as mindlessly grinding mobs solo. Still, he added,

“There’s no way ever to stop jerks. We can’t; no game can. But can we try to design it so they won’t have as easy a time? Yeah, and we are because that is a very, very important issue for us.”

Life outside of RvR

For folks who aren’t into RvR, what is there for you? Crafting! The crafting system will be very involved. Jacobs says that 99% of all in-game items will be made by crafters — armor, weapons, siege engines, you name it. Jacobs said, “Crafters will be able to do more in this game than in frankly any other game I know of.” The will design, experiment, and make something their own. And crafters do all this without ever having to go into battle, and still reap rewards in the realm system. Crafting is a pure class, not something to do on the side. Fun note: Players will be able to see visually the quality and materials used in crating gear, so you can judge whether the person charging you has a shoddy sword or a primo one.

Those who prefer to just build can design their castle or home in CUBE and then port it as a blueprint into the main game to use, share, or sell. Speaking of land, there won’t be a land rush; thanks to the procedural generation of islands, players will be able to claim land for a long time, not just at launch.Because of the size of the world, devs are pretty confident that players will find a place to build their keep that is interesting to them.

What if you want to be in the midst of the RvR without fighting? You can also be a part of things but skip the actual battle part by utilizing stealth and spying. There will be different types of stealth abilities, including one that involves being incorporeal to infiltrate and gain intel.

When asked what CSE plans were when encountering an AFK bot in game, Jacobs answered, “We’ll log them out.”

Expounding on that, Meggs said that if a class is bottable, it is a problem with the game, be it a bug or a design flaw, and the devs need to address and fix it. All of the classes need to actively engage in the battle in some way, not just macro their contribution. To illustrate what CU is doing to combat this lack of engagement (in healers especially), Meggs described the stone healer, which has to aim at and cast stones at companions in order to heal them. Hurling rocks at your friends’ heads to make them feel better? Sounds totally legit! (Please don’t try this at home, folks!) 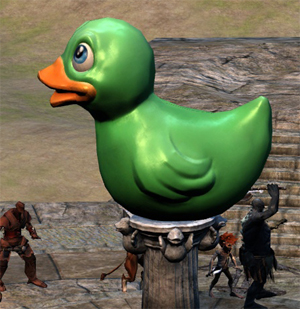 Our own interview with Jacobs touched on the improvement in the graphics, and the panel offered a live demonstration. As devs used a phone’s WiFi to log in and play (really!), the audience was treated to the new visuals that are running on the engine right now. And I have to say, it is looking good! We ran through open land and maneuvered through a deep forest. Although we didn’t get to witness the seasons actually change in-game (and they will), we did experience how dark the forest gets at night. Let me just say that folks who want to stalk their prey or duck into the woods to lose a pursuer will have plenty of places to hide. If you happen to be after/running from an archer or a mage, you have the added bonus of the dense trees that will block arrows and spells!

As to the subject of the environment, not all forest is created equal. Some parts will be more dense and harder to move through, and some areas will be more sparse. The idea is to have different types of gameplay available just through the environment alone. Players should be able to use the environment to their advantage. Jacobs said that “whether it’s the vast draw distances or the deep, dark forest, you’ll see the potential [players] will have for really smart/strategic/tactical play. Where you have to know your environment, where you have to be careful running through areas without lots of light sources and torches for people to see. This engine can handle that. That is a pretty cool and very different thing from any other MMO on the market today.”