Reports this morning that players in various former Soviet countries, among others, had been unceremoniously barred from accessing NCsoft MMORPGs WildStar and Guild Wars 2 appear to have been confirmed by an NCsoft community rep, though Guild Wars 2’s block seems to have been in error.

Players logging into WildStar from CIS countries allegedly received support emails telling them that the game was no longer accessible in their country, and now the official site explains that the blocks are a result of State Department sanctions or unspecified security reasons: 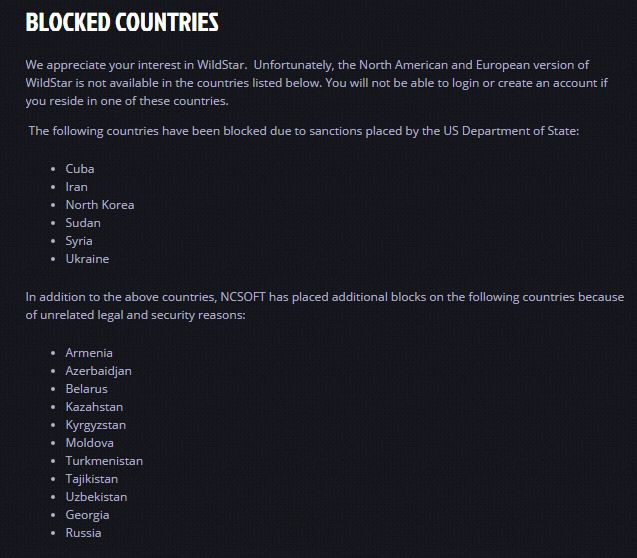 Guild Wars 2 players in the Ukraine also noticed they were being blocked earlier today, but ArenaNet’s Gaile Gray says that was an error. “We inadvertently blocked access to Guild Wars 2 from a few countries, have adjusted it, and you should find that you are able to log in now,” she wrote. “We apologize for the inconvenience.”

We reached out to NCsoft this morning for clarity on the topic and will update if and when the company responds with a formal statement.

The Stream Team: A very Voltaire AQ3D on Skullpunch Island