The loss of Carrie Fisher, a celebrated author and the actress who played General Leia Organa, is an enormous blow to Star Wars fans the world over. Star Wars: The Old Republic players count themselves in that number, and that’s why community members in the game have taken the initiative in organizing vigils and celebrations of the actress on Alderaan. User bericurra has cultivated a collection of screenshots of the gatherings, which cover the Organa castle and the planet of Alderaan; there is also a roundup of the many community events now taking place.

It even crosses fandoms, as the official Star Trek Online Twitter has offered condolences and appreciation.

We join our brothers and sisters in the stars in mourning for the loss of Carrie Fisher. Rest in peace.

Fisher suffered a cardiac arrest while on a plane from the UK; she was rushed to the hospital in intensive care, but passed away earlier today. She was 60 years old at the time of her passing. Her work as both an actress and an author has had a profound effect upon fans of many different shows and films, as well as people struggling with mental illness and addiction, and the Massively Overpowered staff as a whole joins in mourning the loss of this immensely talented, funny, warm, and intelligent woman.

The Journey to House Organa

On Alderan, in House Organa, all across the SWTOR multiverse, there are gatherings for The General. 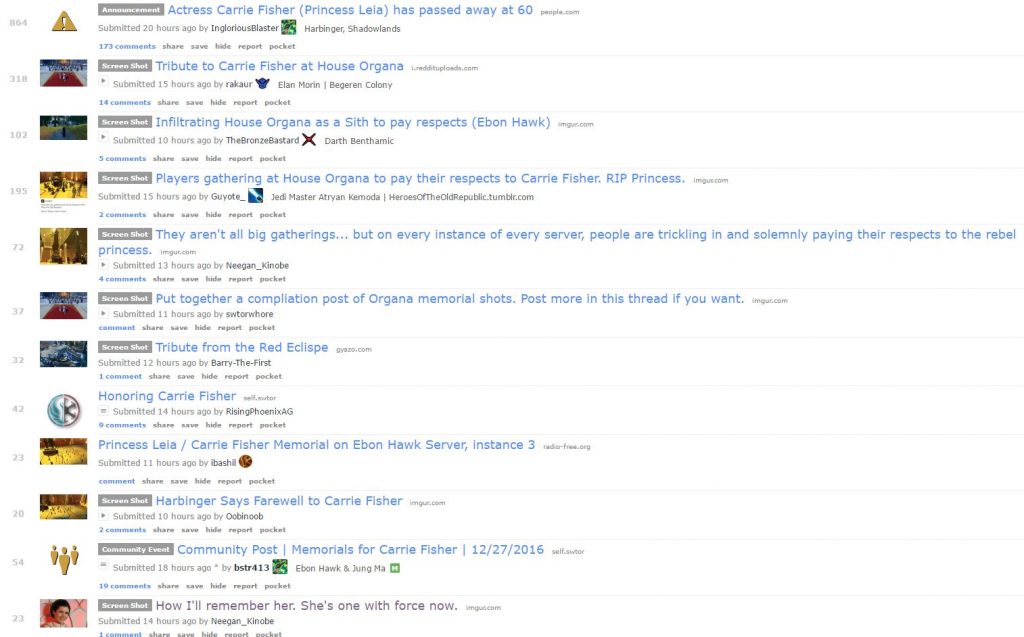