END_OF_DOCUMENT_TOKEN_TO_BE_REPLACED
We are a couple days early with the Hyperspace Beacon this week for a reason you’re going to love: We had an exclusive conversation with Creative Director Charles Boyd about the Star Wars: The Old Republic update releasing tomorrow, and we wanted to give you some insight into what Defend the Throne might offer you. Even though you won the day at the end of the latest expansion Knights of the Eternal Throne, there are still factions that have problems with you and your Alliance. There are still uprisings all over the galaxy.

The new group content called Uprisings (pretty on the nose there, right?) is the focus of the next update. We’ll see five more four-player, intense instances launch tomorrow, along with changes to the Command XP system and (of course) a new Cartel Market Pack.

I talked to Charles Boyd on Friday to get his input on the new content and a breakdown of each new Uprising and the overarching purpose behind them all. 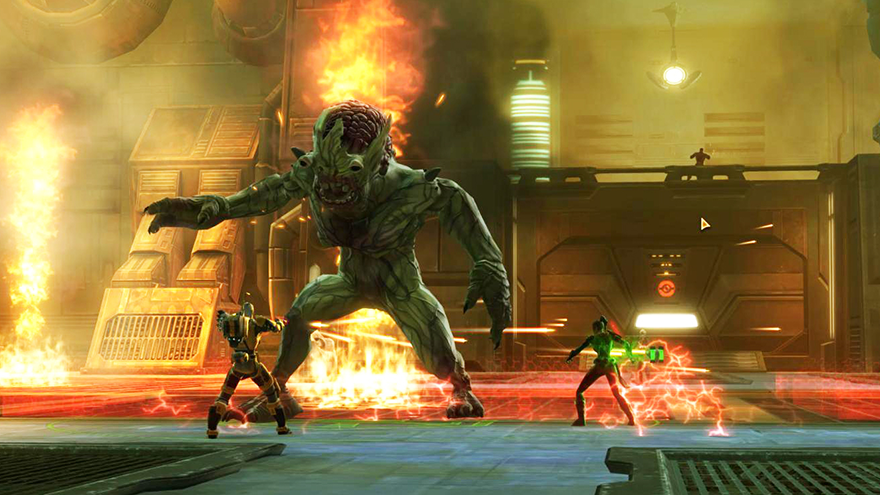 Having played through multiple Uprisings over the last month or so, I can tell you that there is definitely a different feel to them that sets them apart from previous content. For instance, Operations tended to focus on large-scale, single-boss encounters, focusing on cooperative mechanics using eight players. Flashpoints, for the most part, tended to be story-focused, giving time for the player to soak in the scenery and talk to NPCs about what was happening in that moment. Even flashpoints like the Battle of Ilum usually lean toward an evenly paced mission to the enemy encampment.

Uprisings are the combination of the two with a bit of horde-mode to add more flavor. Imagine a flashpoint, but take out the story and add in more mobs. Then, in the same breath, ensure the whole encounter focuses on boss fights. Welcome to Uprisings. 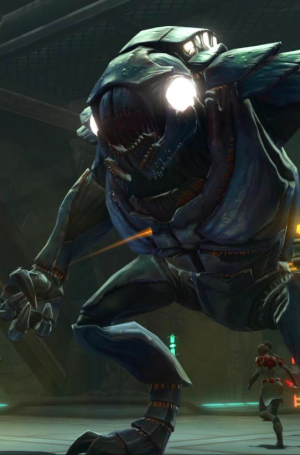 Details on the new Uprisings

The first new one that Boyd mentioned was Trial and Error. He seemed excited about this one as he explained it to me because there is an extra mechanic that allows you to turn into a Rakghoul for a short period of time. According to the backstory, a scientist on a space station was looking for a new super-soldier stim, but of course, things did not go as planned. (Do note that the change into a Rakghoul is optional and only temporary. Apologies to everyone who wanted to walk around Vaiken and Carrick Stations as a Rakghoul.)

He also mentioned the Uprising Landing Party on Rakata Prime, where you face off against a hold out of Zakuul forces attempting to build a new Star Fortress by integrating Rakatan technology with their own. I joked with him about Revan not finishing the job of destroying everything on Rakata Prime during the lead-up to Shadow of Revan. Boyd replied, “That’s the trick with Rakata stuff: It tends to fix itself no matter how much you bash it.” He equated the end of that Uprising to the Normandy invasions that you see in the movies.

The next Uprising he mentioned actually takes place on a planet few Imperials ever visit: Coruscant. It’s called Divided We Fall and transports you to the lower levels of the planet — below the expansive upper city is the Works. A faction of the Coruscant Security Force has attempted to frame the Outlander for a bomb at the Senate. Boyd said that the group wants to prevent any hope that you could ally with the Republic.

The Makeb Uprising called Destroyer of Worlds takes a different twist on the existing Uprising mechanics. Instead of your team being the attackers, it’s your turn to be the defender. You are to escort a droid/bomb into the deep caves of Makeb to destroy an ancient monster that lives in the depths of that planet. Boyd chuckles as he mentions that the droid has “interesting opinions about what it is to be a droid whose goal is to blow up.”

Lastly, we have the Denova Uprising, which has been teased before in a video and still images. Trench Runner is about what Boyd calls a “Renegade Republic military force.” It has seized a baradium mine in an attempt to control the explosive substance for themselves. In this Uprising, we’ll make use of a fun turret mechanic that you use to fend off attacking forces as they attempt to retake the baradium.

Leading to something bigger

I do like Uprisings, and the more I play them, the more I actually like them, even if they did take a while to grow on me. However, it adds that much more worth to them when they mean more than earning the next bit of Command XP. So I asked Boyd about a connection to a greater story. He advised me and our readers to look to the codex entries.

“There are little hints in codex entries that we’ve been peppering in there that will start to suggest that maybe there is something to all of these uprisings and why they all happen to be popping up at once — suggesting that there is a larger force or secretive individual or individuals who are pulling the strings against you in some way. They are meant to set up where the story’s going from here on out.”

In the coming months, BioWare is looking to the players for feedback regarding the Uprisings and what to do with them. The first wave of Uprisings that launched with KOTET where mechanically less complex than this second wave that releases tomorrow. BioWare wants to know where you’d like Uprisings to go next. Should the developers make more of the same four-player instances, or should they look to expand the instances to 8- or 16-player? Maybe they should somehow make them solo? Inquiring minds want to know.

I’d like to thank Charles Boyd for taking time out of his day to talk to us and let players know that these new Uprisings can be found in Update 5.1 Defend the Throne, launching tomorrow. And of course, if you’re looking for the whole patch notes — including how exactly the armor system will look after the Update —  you can find them on the official forums.