I admit that before PAX West 2017, I hadn’t logged into Defiance in a long, long time. I couldn’t even say how long. Even so, I still have very fond memories of the hellbugs (isn’t it just so cute the way they try to eat off your face?), so I was intrigued to see where the game was nowadays. How is it doing? Where is it going?

I met with Executive Producer Matthew Pettit, who hooked me up with a character in-game for some high-level Arkfall hunting while we talked about recent updates and future plans for the open-world MMO shooter.

“I can tell you it’s going to be a very exciting year for Defiance,” Pettit told me. And after listening and playing, I think the game is definitely worth keeping an eye on — or maybe even jumping in right now. 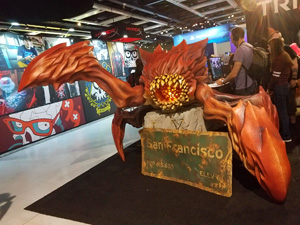 Something a number of folks might not realize when talking about this shooter is that the game is PvE; most often shooters are equated with PvP (and very few if any have the world scope this does). That misunderstanding might drive people away. It might also be that Defiance is just not well known in the gaming community, despite being around for four years.

Pettit is more than aware of the problem. “We need to reach more people, so we are working on possibly expanding into other areas, maybe other consoles,” he said. As it is now, the game is on PC, PlayStation 3, and Xbox 360. “We want this game to last five years into the future, and PS3 and Xbox 360 probably aren’t going to be around in five years.”

How does the game play currently? Pretty smoothly, judging from my time at the keyboard. The first thing we did was go use the map to find the closest Minor Arkfall, then after defeating it, we moved on to join other players at Major Arkfall (five minors plus a boss). Then we ended on a massive dynamic raid-type event facing the Progenitor. The ability to easily switch between six load outs — each with two weapons and a shield plus separate gear, vehicle, and looks — was really nice, as was the nearby ammo resupply box. (I’m pretty proud I actually didn’t die the entire fight!)

I honestly didn’t remember the game handling this well, though I never did reach this level of play in the real game. “It’s been out for four years and we’ve made massive amounts of improvements — it plays better, it feels better, and we fixed a lot of the stability problems we had early on,” Pettit reminded me. “There is a lot of the game that is great, and a lot of the game that we feel could be improved.”

To that end, Trion is expanding the Defiance team and also putting more resources behind it right now. “What we’re really trying to do is change some of the pain points that people have brought up over the years,” Pettit explained. “And just make a better product.”

One thing that the team wants to change is the abilities and ego perks into a class based system. Currently, the ego grid is a jumbled block of choices that Pettit called “convoluted and hard to understand.” So he said the idea is to revamp these by pulling them out into subclasses. Before the fear of getting locked into a class sets in, Pettit assured me, “You can switch your class at any time, but you have to level each class individually.” Furthermore, “You won’t be pigeon-holed into a class when you start the game.” The goal is to allow players to pick their playstyle, even if that changes from fight to fight.

I don’t see how anyone can say ” smooth gameplay”. The frequent disconnects and invisible enemies are far from what I would call smooth. It’s apparent you could not have been in game for more than 20 mins. Even more apparent that you never saw an expedition or this review would have been alot different. As a steady player for over 3 years I can say it’s been anything but “smooth” . I’ve seen a steady decline in “day one” players and watched known bugs go ignored or shrugged off as business as usual. Seen support blame the customers when everything has been shown to be on the server side, then just cease to answer after such proof is provided, or simply throw up their hands and say “we aren’t authorized to fix this , but we will pass your issues to our Dev team”. This game needs new talent in most areas so I will be hoping for the best, but I expect more of the same. Which tends to be a simple cash grab with little investment into the game itself.

Sorry Trion. I really enjoyed Defiance. I even watched the TV show for a while.

But it died to me the moment you decided to NOT move to PS4/Xbox One like every other Console MMO did.

I moved on into the new generation without you, and the other MMOs that moved with us got my money instead.

If you had ported to PS4 at its launch, I might still be playing and paying attention to Defiance.

I enjoyed my time in Defiance and could be persuaded to go back. Unless Trion does the same thing to it that they did to Rift.

I *really* hope Trion are serious about putting some extra weight behind Defiance, but I’ll believe it when I see it. The game always had a marvelous foundation to build upon, fun gameplay, unique setting, and a very dedicated community, but the problem was always that the devs never, ever built upon it. Never dug into the setting or capitalized on the stories the TV show constantly threw their way. Never made it easy to group or run clans or fight bosses en masse. Or even solved basic QoL and server problems that drove tons of people away. (The servers were still splintering everyone off into different shards during open world boss fights when I played.)

Not to mention their last big content update was a 45 minute campaign and a new enemy type for Arkfalls, and that was over a *year* ago. The content update before that was Alcatraz, where you had to pay for tokens to run randomly generated dungeons like an arcade machine. Then there was their attempt at putting a much-needed auction house in the game, which crashed the game client so they had to remove it altogether.

I’ll need to see a few updates that aren’t just more lockboxes, reskinned weapons, and damage types before I even think about jumping back in. Since the game launched, it’s always seemed like the devs could just never figure out how to properly update the game (the original team was laid off years back) and aside from Silicon Valley in 2014, the open world has been static. I desperately want them to prove me wrong, but I waited years for any kind of effort. And still waiting for the S3 content they promised and never delivered.

Hmm it has been a long long time since I played this. I have general memories of it being kind of fun in short bursts. I suppose it might be time to revisit it again to see what it is like nowadays so I will add it to my never shrinking list of games I want to take a look at :-)

I gave the game a try shortly before it went F2P, on the basis of liking the tv show, and remember it having good shooting and general gameplay but not much content. Like Greaterdivinity, I was left with a feeling of “Is this it?” and not much to do except wander around grinding rep / xp / loot.

…Did the tags auto populate based off of seeing “ark” used in the article? >.>

Yes, it does that if you can’t save fast enough after deleting — and sometimes they still sneak in!

Weird, just thought that was funny seeing all of the tags for ARK lol

Imo their efforts would be better spent on a Defiance 2, or they simply need to drop support for old gen consoles and stop limiting the game with long out of date systems.

At least put out an expansion that’s exclusive to PC and possibly current gen consoles. One that either adds more open world to the existing stuff or moves on to a much larger open world map. Nothing is limiting them from exploring other parts of the world/United States. Hell it’d be interesting if we could roam around in The Great Divide or whatever.

I wanted to play it when it first came out but the controls are one of those that once again makes me nauseous, so I ended up logging out never to play again after suffering through 20 minutes of it.

Which means I never got to find out how the mechanics really work or don’t nor how big or small the game world was. :/ Man do I dislike controls like this, looking at you DDO, ESO, SWL.

You can switch your class at any time, but you have to level each class individually.” Furthermore, “You won’t be pigeon-holed into a class when you start the game.”

I really hope we start seeing more class systems that work this way.

Defiance never had classes. Not sure how adding them will do anything except create another grind (re: leveling each class).