This past weekend was not the first time I have attended a developer’s convention, but Frontier Expo 2017 was one of only a very few times when I have been able to attend the first one of its kind. Last weekend, I got to witness the birth of Frontier Developments’ fan convention, held in London, UK. At 1500 attendees, it may have been a relatively small gathering compared to conventions like PAX or other more established cons, but it was still great. In fact, it offered fans a few firsts of their own! Besides your classic meeting-and-greeting, game announcements with reveals, and after parties (including live entertainment by Jim Guthrie, the musician who created the Planet Coaster music), folks got to try their hand at the studio’s really old games on their original equipment in the Frontier Developments museum.

Even more than that, attendees got to meet and listen to world-renowned experts in the fields of paleontology and astrobiology. Not because these would sell the game, but just because they are subjects of interest to fans. How many studios have offered that?

Now there were understandably a few bumps and learning experiences in this first endeavor, but in all, I say the inaugural FX2017 was a resounding success! It was easily the most chill convention experience I have ever had, and I look forward to next year’s show (and hanging out with the space loach more!). Let’s dig in! 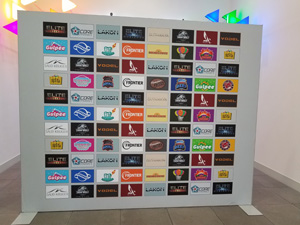 Because of my background, attending an inaugural con was especially intriguing to me; one of my biggest passions is watching communities develop. I loved witnessing the entire event unfold. In many cases, this was devs’ first time getting to interact with fans face-to face — an experience that is pretty different than on forums or livestreams. Those I spoke to admitted they didn’t quite know what to expect. I watched as the devs I spoke to went from excited anticipation mixed with nervousness at dinner the night before to riding an adrenaline high during the festivities to being elated the next morning at breakfast. I think nothing truly compares to feeling the energy and passion of fans in person; all devs should be able to experience it! And fans love interacting with the devs who make the games they love.

As much as I watched devs and fans feed off of the energy of each other, this convention was the most chill one I have ever experienced. There was never any frenzy. Folks were relaxed, respectful, and friendly. 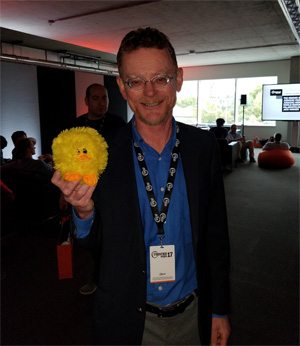 Attack of the scientists

When I learned who would be speaking at the con, I was blown away. I expected to hear about game things regarding Elite Dangerous, Planet Coaster, and Jurassic World Evolution, the three titles highlighted, but I never expected to be treated to lectures by two world-renowned scientists. These men were in no way tied to the games or the studio; they just came to share their passion and knowledge with people who are interested in their subjects.

First, we got to hear from Dr. William Bains, a leading astrobiologist. His presentation on “Life in the Universe: What we know, what we guess” was phenomenal! He went over each factor in the Drake Equation, which he noted “took SETI [Search for Extraterrestrial Intelligence] from science fiction to highly speculative science.” With all our technological advancements over the years, we apparently only know only two of the values in that equation! Hearing about the work Dr. Bains is focused on now was fascinating. I also had the privilege of spending some time with him after just chatting. If you ever have the chance to hear him speak, do it!

Next up was Dr. Jack Horner. Do you remember the fictional Dr. Alan Grant in Jurassic Park? He was based on Horner, a leading paleontologist. Horner’s talk was chock-full of information, covering his  earlier discoveries to his time sitting next to and advising Spielberg during the filming of the Jurassic Parks to his later discoveries discounting some of his previous facts. He informed us that his understanding of how triceratops looked (as depicted in the movie) was wrong, and that their headplates were covered in keratin and much more colorful. We heard about attempts to get DNA from fossils and his discovery of dinosaur nests. Horner also described his work creating a dinosaur from chicken eggs, noting that the head, arms, and feet have all been successfully altered in embryo stage, but not yet the tail. We also learned the value of grad students! (OK, you had to be there for those jokes.)

And not to be forgotten, Frontier Developments also has its own scientists on staff; Dr. Anthony Ross is a programmer whose background is in experimental physics. As a particle physicist, he works on creating the realistic galaxy that player will explore. During his presentation, he gave a condensed overview of what it takes to create that galaxy. For all that info, he really needed a much larger block of time!

I am truly sorry for everyone who did not get to hear these presentations. I was unsuccessful in finding uploaded videos of them to embed. I am glad that I have my audio recordings to keep, but they aren’t quite as awesome without the fun slide presentations. The gallery below at least has a number of pictures I captured. 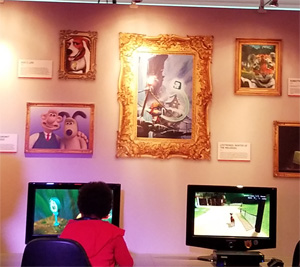 Another aspect of the convention that I thought was fascinating was the museum. Here, the studio put together a number of stations where attendees could play 15 different games (13 from Frontier Developments and two created by CEO David Braben before founding the studio) developed over the years and not necessarily accessible now. “We went through all the original games,” Chief Creative Officer Jonny Watts told me, “and tried to get them to run on the original hardware.” Elite was there on a BBC micro with a BBC monitor, and Zarch used a Acorn Archimedes computer. Watts said the hardest part was choosing which games would be included. He then admitted that it was initially to be only eight stations, but he never could get it whittled down, so he kept asking for another, then another, then another to be added.

Did fans like it? “The reception was brilliant,” he said. Besides diving in to play, Watts noted that fans got to see the journey of what Frontier’s done, and could watch the evolution of technology through those games and even into today’s. Things that are learned and developed in one game move forward into newer ones.

The bumps in the night

As with anything, there were some aspects of the convention that could be improved upon — mainly, the studio underestimated interest. This was demonstrated during the various presentations: For all three scientists I already mentioned, the huge number of folks wanting to listen to their talks simply could not be accommodated. Plenty had to stand in the back in order to hear. Luckily for the presentations on the main stage, a larger room behind the area allowed for many more to be in earshot, but the room with the second stage was smaller and had to turn many away. The studio had forethought and placed TVs in other areas of the convention that people could watch certain presentations from, but technical difficulties prevented sound for the first few. Also, when people attend an event in person, you better believe they’d rather see it in person!

As with any convention, you can never see everything you want to. Conflicts meant I had to choose certain presentations over others, so I was sad to miss out on more of the history of the company and dev Q&A sessions. I definitely need a clone or three at these things. Maybe I’ll get the chance to hear more next year. Will there be another? As of the next morning, everyone at the studio I spoke to was all in for a FX2018. Until then, I can wander down memory lane by listening to my recordings, browsing through the gallery, and watching the recap below.

Disclosure: In accordance with Massively OP’s ethics policy, we must disclose that Frontier Developments is paying for our writer’s travel, accommodation, and ticket for this event along with several other members of the gaming press. Frontier Developments has neither requested nor been granted any control or influence over our coverage of the event, and the writer is paid exclusively by Massively OP for her work.
Advertisement

As Elite takes alot of patience to play and is unsuited to the short attention span mass I’m not surprised they are a friendly and polite bunch.

Sounds like it was quite interesing and a different take on the usual gamer-focused conventions. I know a lot of gamers don’t care but I really like that they have quite a strong scientific involvement with some of their work.
The presentations that weren’t streamed are going to be uploaded at a later date as far as I know, so hopefully we’ll get to see them at some point.

I thought the stream interview with William Bains was great especially when he pulls out his guitar and starts singing (1hr15m) :D

I thought they might already be uploaded so was going to embed them, but haven’t seen them. I hope ya’ll can watch sometime because they were great!

Unfortunately, I missed most of the good stuff as I was on the Lave Radio Stand all Day. Mind you (as a Patron and a Backer of MassivelyOP), I would have liked to say hello.

I wish I had known! I hung out by there a little. I totally would have said hi. (You might have heard me coughing anyways! lol)