END_OF_DOCUMENT_TOKEN_TO_BE_REPLACED
When you are invited to go to a club with Trove’s devs, you’d best get ready for fun time! Of course, I mean a Trove club: a place where you can design build your own special world with friends. And clubs are getting some serious attention in this week’s update. Earlier in November, I sat down with Trion Art Lead Robin Luera and Animation Lead Ted Sanger for a tour through the voxel’s games upcoming club-errific features. Here are some of the highlights!

One important and awesome change is that clubs will now have six different permission levels. And there are tons of permissions! This will allow leaders to customize who can do what in the club, which will really come in handy with the new building and adventure features. Leaderboards have been also changed up. The top 50 average power rank and level will be displayed (the PR will be calculated of each member’s highest pr character, not add them all together). Mechanics like using or destroying the most blocks, however, have been removed.

Fixing it up with Fixtures

Clubs will take on a bigger role in the game once this new update goes live. Instead of being just a place to build and hangout, they will become a place to go for adventure as well as boost your other adventures thanks to fixtures. Fixtures are prebuilt structures that club leadership can place to offer special amenities to players. Some give boosts, some are vendors, and some summon NPCs that grant players special adventures. One even increases the rarity of the NPCs your club can summon!

The most exciting thing for me was these new NPCs, but the one that gives the chance to fill members’ flask charges while fighting would also be pretty useful. I also like the stable that allows mounts to be placed for display. And I cannot deny that the ability to summon a bank would undoubtedly benefit my packratty self. Others may really appreciate the chance to double hit when attacking, and club owners are sure to appreciate reducing the costs of all fixtures. 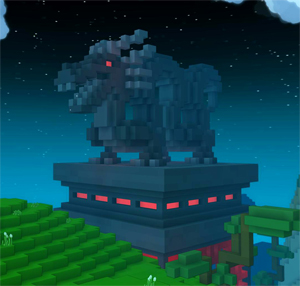 Fixtures have levels and can be upgraded as well as rarity levels. Upgrading and keeping fixtures active (i.e., paying rent) happens using a new currency called “clubits” that players will donate to their clubs. (Adventurine, the new coin earned in adventures, can be traded for clubits.) The rarity level of fixtures that can be placed depends on the club’s level, which is determined by the XP gained from adventures run from that particular club. Anyone who can access a club can also take part in its adventures; you don’t have to be a club member to do them. However, the NPCs have sleep cycles — with rarer ones sleeping longer — and only those with the appropriate level of permissions can wake them outside of these sleep cycles. Players can take three different adventures at one time.

Obviously, the more people doing adventures in a club, the better. However, Luera emphasized that club XP was capped by number of members, so smaller clubs will not be at a disadvantage compared to larger ones; in fact, she said gaining XP will be easier for the smaller ones. Finding clubs to do adventures in becomes important, both for the player wanting to earn adventurine and the clubs wanting to earn XP. To make that easier to do, Trion is ensuring that the hub tower with portals to various clubs will get a makeover, with four floors of of portals ranging from most popular to recently upgraded. All portals will go to active clubs. There will also be vendors there that you can buy mounts and decorations from, and on the 1st and 15th of every month, there will be a vendor at the nearby dragon statue where players can buy things with their dragon coins.

One important note Luera made was that any funds players payed into upgrading a fixture will remain with that fixture’s slot even if it is swapped out for a new fixture. No progress will be lost.

Alter the framework with Frameworks

Want to build some of the big impressive things you have seen out in the world but don’t want to spend hours trying to painstakingly recreate it? Would you like a milkshake dungeon in your sky? (The dev club has one!) Frameworks are like fixtures except with no buffs attached or special amenities. They are just giant decorations that players can put in their clubs — as long as they have the recipe and the necessary blocks, that is.

Interesting note: Sanger explained that the number of blocks to build frameworks was smaller than the actual blocks used in the structure, so technically you could build it then destroy it and have more blocks than what you started with. He wouldn’t recommend this as a speedy alternative to block acquisition, however, as gathering blocks is way faster. Recipes come from the different biomes to represent all the various looks. I have put in a request for that haunted house dungeon from Halloween, but the crypt will have to tide me over until that can be possible.

Frameworks also come with building pieces instead of whole buildings. I myself want to use the castle pieces. People can also make candy trees, stuff from the undead world, and more. Speaking of building pieces, there are also new LED blocks that flash. These rare recipes can be found in any biome. 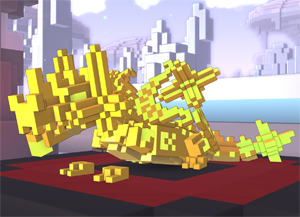 While most of the focus of the update is on the clubs, that isn’t the only thing. Sanger showed off the new Asian-inspired biome called Forbidden Spires. I love the traditional look of the buildings, the Terracotta warriors, and the adorable spirit foxes (which will become a mount in the future, but I requested to have them as pets and both devs said a pet would be a good addition. Score!). Many players will surely love the addition of a new red crafting material that will be used to craft radiant and stellar rings. And as for crafting, there is also a fiery phoenix mount to craft. Although we didn’t see it, I was told to be on the lookout for a red dragon in the biome. In addition to that, if you like fishing, plasma fishing will be a thing. A real thing. And the patron sub has been beefed up so that players will earn 33% more adventurine.

This game is one big “ooh shiny” moment, everything in the screenshots makes me want to explore and take screenshots, i’ll be back one day, i promise :-)

This is the kind of update Clubs have been waiting for since the start. Permissions changes have been needed to make club worlds a little more management-friendly.

I’ll certainly be checking it out tomorrow.