After a few days of playing Bot Smashers at Hi-Rez Expo 2018 this past weekend, I sat down and talked shop with Rory Newbrough, Bot Smashers Design Director, to get a few more details on the upcoming game. I discovered where the idea came from, and learned more about what to expect in its released form.

What I didn’t learn was that the newly announced game had an MMO version hiding in the wings. Yes, I said that. I think I would totally live in a gaming world of the bots from here. They all have such personality, and they are pretty pleasing to the eye. One of them already has a cloak! The idea just oozes fun. I could see the gruff Topsy trying to maintain order, while the ever-flailing Smashbot runs panicked from life’s crazy stuff. And those Rangerbots? They’ll band together like little green army men to get stuff done. Sadly for me, the mobile game is not an MMO – only a 1v1 battle arena. Maybe someday it could be. (Hey, leave me with my unlikely hopes!) Until that pipe dream can find a thread of reality, here’s what you can expect from the actual mobile game.

First off: the name. When ideas were being considered for the game, Newbrough pulled inspiration from the favorite little mascot of the project, Smash Bot (he’s the blue guy with the flailing arms in the trailer that gets swarmed by the little yellow ones). Everyone loved him from the very beginning of his concept. Why not just make the name simple? Bot Smashers pretty well summarized the entirely of the game — smashing bots. Sounds quite reasonable to me. 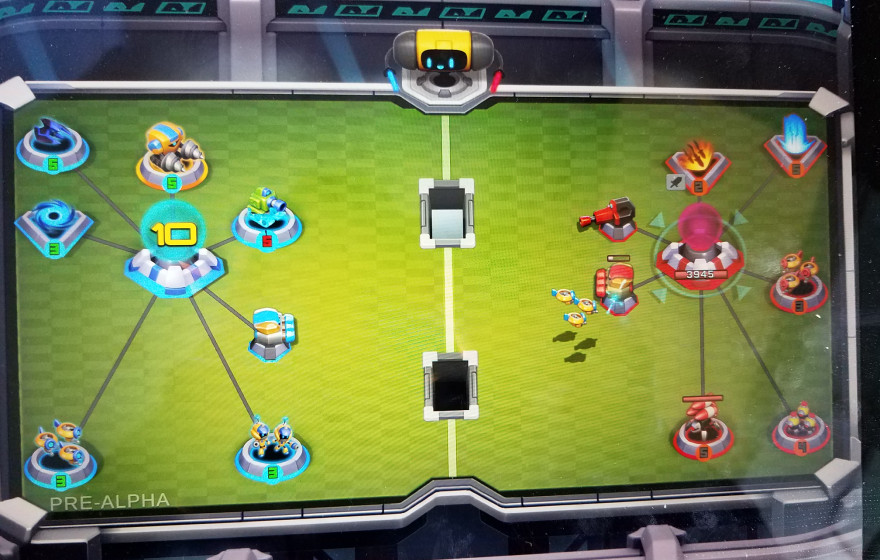 Next up, we discussed where the idea came from. Although the evolution of ideas can be hard to track because they sometimes change so drastically throughout the process, according to Newbrough, as with everything at Hi-Rez, Bot Smashers can be traced back in some way to Global Agenda. They’re really not kidding when they make that statement; even Founder and CEO Erez Goren referred to this over the weekend!

“It did start as a Global Agenda mobile game, where you’re building space bases and that kind of thing,” Newbrough told me. “Over the last year and a half before it even went into [a] project, we had an idea that we wanted to do a strategy mobile game where you build bases and fight each other. We had a lot of ideas coming out of SMITE Rivals and other projects we were working on that lead right into that.” He explained that bots were ultimately settled on because a sci-fi theme was wanted but aliens or men in mech suits did not translate well to mobile because of the need for such detail not working well on a tiny screen. “This kind of set up really allowed for us to express those [bots’] personalities without having too much detail on the screen,” he said. People could easily relate to what the bots were.

My next questions were about the robots themselves. There was a decent selection of some categories, but not so much on others. Newbrough said that what we saw in the demo was more along the lines of the available set of bots for starting the game; many more are planned. He described how the team wants to make more bots with specific skill sets, like the burrow bomb bot that digs a hole and becomes a landmine. “Goofy fun things that make the units very interesting and unique, we want to do a lot more of those,” he stated. Bots will also have unique abilities to set them apart from one another. 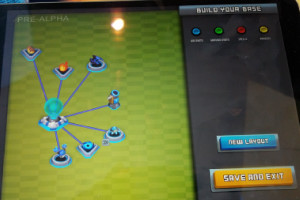 What about base configurations? I personally played at a mid-level with six nodes on the board in various configurations, but Goren told me that the game really gets exciting with 10! New players won’t start with nearly that many (more on tutorial later). Node configuration and number of nodes are locked to specific layouts. Right now layouts are drops or are earned, but when you get it it’s saved in your collection and is yours to keep for use or disenchant or whatever.

Speaking of layouts, I had to ask if there would be a better UI system than having to scroll through hundreds of maps to try and find your favorites. Newbrough assured that there will be ways to organize layout, possibly even marking favorites or having filters to find specifics, such as like three spell nodes, or two ground unit nodes. Your favorite builds (layout plus editable units on nodes) will be kept in what would be perhaps five or 10 pre-saved slots. Newbrough said, “We’ll rework the UI to be more friendly to a larger list” of both layouts and bots.

Will players be able to design their own layouts? “Not initially,” Newbrough answered. Doing that would be counterproductive to players experimenting with new things. He explained,

“The reason that that is the case is if you look at mostly collection games, deck building games, and those kind of strategy games, what usually happens is you get the perfect build that you like and it’s exactly what you want and you never really want to change it, right? You don’t really have any incentive to try new units or try new ideas because once it’s perfect, you leave it that way. And then what happens is you end up playing that build for so long that changing means you going to start losing a bunch because you need to learn a new build. That usually means that people will turn because they are playing the same thing over and over which will get boring or can get kind of stale.

Replayability comes from “always finding new ways to play because the game is always forcing you into different strategies.”

Now on to the maps themselves. Newbrough‘s focus was to create a dynamic game that changes constantly but still has players on the same playing field. That happens to include having different playing fields with different obstacles. “We’re going to have lots of maps themselves aesthetically, so the visuals will change a lot. We’ll have nine to 20 or whatever of those.” He then noted that although it wasn’t in the demo, the changing maps is already in the game.

“Every time a new game starts the assortment of the obstructions in the middle will randomly change when the game begins. You may have two lanes, three lanes, four lanes, or a big blocker at the top and a big open thing at the bottom. We want to do that as well so that the builds are also changing.”

He described having a big wall on the upper portion and open area below, meaning air units could get over the wall by ground ones have to run around it. The point is that every game is very dynamic and players have to react to that. Obstacles “change how you react to [the match], change what a build does. It keeps each build fresh because the map experience will change each time you play.”

Could there possible be different modes, such as 2v2, or a four player free-for-all? Newbrough answered, “Long term, if the game does really well we’ll have tons of different wacky modes like 2v2 or different restrictions or a bigger map.” I am looking forward to that! How about a friends list so you can duel someone specific? He doesn’t know when, but that is on the list of features they want to incorporate.

Although the details are set, Newbrough assured that there would be a tutorial. He explained that players would start out with just the bare basics and build from there as they learn. Initially folks would have a beginning base configuration with few outlying placement points and a small subset of bots to learn and become familiar with the mechanics. Players would then start acquiring new layouts and bots one by one so they can expand their knowledge as they go. “It would be very progressive that way to unlock and have a good knowledge of what everything does.” he stated. ” And then from there you’d have different unlocks for like a bigger base [more placement nodes], different layouts [nodes positioned differently], and you’d be playing against other players.” On the progression itself, however, Newbrough could not offer any specifics yet as it wasn’t quite defined. But unlocks through play and loot drops are in the picture. He reminded that the demo was very early pre-alpha just to show gameplay, but the team still has a lot of work to do on the back-end systems.

Newbrough said that the reception of game has been really positive. In fact, he admitted it was almost unsettling because he was used to folks liking the game but still offering feedback on what could be changed. Instead, “so far people just love the way it is.” if the game does well, it will also very likely port top other platforms, so PC players could enjoy the same bot-crushing action in the future. Goren stated, “If I have it my way, you’ll be playing on seven different platforms all at the same time against everybody else on the other platforms.”

As far as monetization, Newbrough couldn’t offer any definitive details as things weren’t nailed down yet. He did say, “It’s going to be a very collection-based game, so there will be a lot of ways to collect the units or upgrade them and make them stronger with different robot parts for them, but the specifics aren’t nailed down yet.”