SuperData published its January recap of the worldwide digital games market this week, and the analytics firm doesn’t have much good to say for sub MMOs. “Continuing their decline, the Social and Pay-to-Play MMO segments shrank 5% and 9%, respectively,” it notes.

There hasn’t been much shift at all on the PC revenue side, with the top 7 games remaining exactly as they were in December – including PUBG, Fortnite, and World of Warcraft. CSGO entered the list to displace ROBLOX and nudge down World of Tanks, and that was it – not much movement.

On console, Call of Duty: WWII continues to hold the top spot, but Monster Hunter World has joined the list and claimed #2 thanks to its launch last month. PUBG, interestingly, has completely vanished from the console side (it was #3) last month, but Fortnite continues its upward climb.

As for mobile? Look, I love a good match three game, but even I am mystified that people actually pour money into these things to the point that both Candy Crush Saga and Candy Crush Soda Saga 1) exist and 2) make enough money to place separately in the rankings with the likes of pay-to-win Pokemon Go and NCsoft powerhouse Lineage M, both of which dropped a place or two but are still hanging in with the big guns. 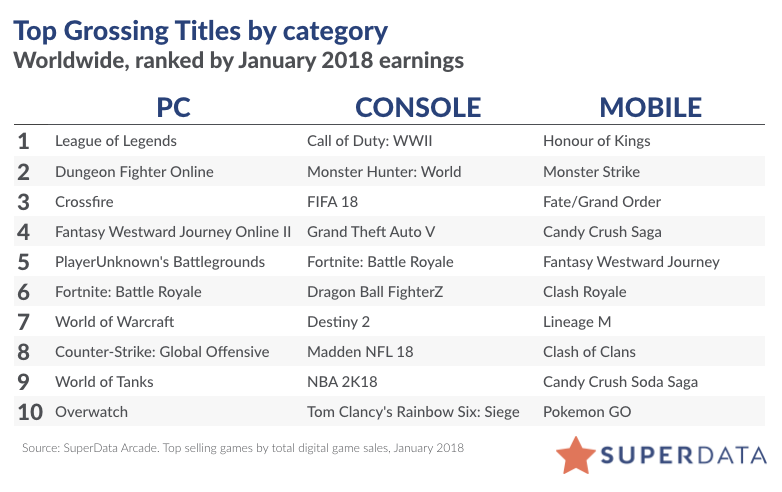 Beyond my usual complaint about SuperData only collecting data on a tiny fraction of the games market…..

Is this a surprise? There have been no new sub-only MMOs for years. The old sub-only MMOs converted to F2P. So, it seems pretty natural to me that their market share would be declining…..it’s because there are less of them!

So, don’t look into these results too much (or at all really, SuperData is garbage).

While the headline “SUPERDATA SAYS ‘PAY-TO-PLAY’ MMOS DECLINED AGAIN IN JANUARY 2018” is true, I would caution reading too much into it. MMOs in general but especially pay-to-play MMOs are dominated by one game, WoW. And MMOs are cyclical. So we would expect the p2p segment to drop or be stable in Q1 and ‘PAY-TO-PLAY’ MMOS show huge increases in Q3.

I really don’t see anything new in as far as the chart goes.

As for sub games not faring well? Heh. I bet if you broke it out by sub genre’s you would see a different story.

Sure F2P and B2P have big audiences. But for F2P, that audience are more akin to nomads and the same can be said after B2P games have aged bit. But sub games, I believe establish more loyalty and thus in the long run be better financially for MMORPGs in particular.

My take is, you need a mixture of all of these schemes to best attract players. And it really depends on the game and your audience.

When the 3 of the top games on console are SPORTS simulators and the other 3 are WAR simulators, it speaks a lot of their audiences.

Which goes back to the question asked earlier about who developers market to – boys.

And a certain type of mindset within that group, as well.

The era of paying for things is over.

People seem more than happy to pay for things, even digital things. I think what we’re seeing is people don’t want to pay for nothing. Developers are more and more often selling the hope or promise of something instead of an actual item. Gamble boxes are the poster child of this phenomena, but it’s not the start or the end. If you want a game that’s going to be different than the usual AAA, but still have decent funding you’re now expected to become a producer on the project by financially supporting the development through crowd funding, long before there’s any product to enjoy or sell. “Lifetime” memberships have been popular for years, not many have proven to be more hype than anything. Changing business models, reboots of titles, and the pressure to squeeze more money out of every player logged in mean you’ll just be targeted as someone they expect to spend even more money specifically because you already spent a bunch.

WoW and FFXIV are doing fine as sub games. The rest are making money hands over fist, literally billions each year as a whole industry. However, much like Hollywood and broadcast television, they can’t expect people to keep paying for what they’ve already seen.

Feel it’s worth noting that GTA V is still in the #4 spot for consoles this long after launch, which is totally insane to me.

Destiny 2 at #7 on consoles is rough for them, especially considering they’re bookended by a semi-niche anime fighting game (even if it just launched) and an already released football game that only has much traction in NA.

Also it looks like Destiny 2 didn’t have much of a PC audience after all.

Nope, PC players have a far lower threshhold for this kind of bullshit than console players. While Destiny 2’s port is great in terms of performance, it’s pretty barebones/bad in terms of expected PC features for an online game – specifically stuff like chat. Between that and its struggles while there are just so many other awesome online games on PC competing for folks time, it’s no surprise that the PC playerbase has cratered.

Grand Theft Auto Online and NBA 2K18’s MyPlayer have mined mountains of cash for Take-Two for the past four or five years. Zelnick yesterday boasted that they account for 42 percent of the company’s revenue over the most recent quarter.
“We’ve said that we aim to have recurrent consumer spending opportunities for every title that we put out at this company. It may not always be an online model, it probably won’t always be a virtual currency model, but there will be some ability to engage in an ongoing basis with our titles after release across the board,” Zelnick said

FYI Final Fantasy XIV does not give info to Superdata. So in be for people say FF is dying or dead or not doing great.

But that seems irrelevant.
1) Most companies do not provide most market research firms exact data. One of the things you pay market research firms for is estimates.
2) Facts we do know is that under the MMO section of SE [FFIV and HQX (all platforms including PS4 and NS)] showed a slight 5% QoQ decline (SE characterized it as stable) to about $71M. SE: “solid monthly subscription revenue from the “FINAL FANTASY XIV: STORMBLOOD” IMO, FFXIV is not doing great and is doing good/well.
3) As to its future, that depends upon your (at least for me) unknown guess as to how SE will evolve and whether that will result in more or less investment in FFXIV.

The console game markets in North America and Europe are increasingly getting competitive and oligopolistic. On the other hand, the game content market for smart devices such as smartphones and tablet PCs centering in Japan, North America, Europe and China has been growing to surpass the console software market. Digital sales of fullgame download and premium downloadable content are rapidly increasing mainly in North America and Europe on
top of the conventional package distribution. In addition, consumers’ demand for new experiences such as online multi-play and live entertainment are increasing. As such, the business environment surrounding the Group is in the midst of major changes. The Group is focusing all efforts to achieve growth coupled with profits on a solid revenue foundation through introduction of responsive and flexible content development conforming to the ever-changing environment as well as diversification of profit opportunities.

How will FFXIV fare under “major changes” and “diversification of profit opportunities“? IDK. TBD.

Just the fact that World of Warcraft is on this list shows how popular the game still is. Although they do have micro-(not-so-micro-)transactions for cosmetic stuff and a few other things, so they do gain from that. Regarding the costs, I really wish level boosts were cheaper, because damn, it is boring to plow through the old content.

epic went apeshit with paying facebook meme pages to post fortnite videos to the point all of mine plus now closed pc parts store NCIX were spamming them daily.

which was a turn off both based on the gameplay footage alone looking terrible and in terms of the fact that i was seeing that shit instead of dank memes – or in NCIX’s case that they weren’t responding to my emails or socail media @’s and instead shit posting that trash every day.

As much as people would love to claim otherwise business models are not movers for success.