SuperData’s December 2017 global revenue chart is out, and it’s good news for the industry on the whole, as holiday spending was up by almost a fifth over 2016.

On the PC side, we’re seeing quite a shakeup over the last couple of months. Dungeon Fighter Online has surged back into the #2 spot behind League of Legends after tumbling last fall thanks to PlayerUnknown’s Battlegrounds, which itself has fallen several slots on the PC side (though faring better on console). Fortnite is now on the top 10 list right behind PUBG; World of Warcraft and Roblox are hanging in there; and Overwatch has even returned to the PC list at #10.

What’s not on the PC list at all? Destiny 2. It’s in the middle of the pack on the console top list right now, but it’s been overshadowed on PC. Why? “Destiny 2’s new DLC release, Curse of Osiris, failed to make a significant impact on the game,” SuperData declares. “[Monthly active users] and digital revenue were generally flat month-over-month.”

Expect to hear a lot more on the battle royale clone front, even with PUBG’s slips, as Fortnite pulled in $89 million in December.

“PLAYERUNKNOWN’s Battlegrounds’ success continues and competitors respond. Xbox owners waited patiently for PUBG to make its way on console and responded by buying more than 2 million digital units during launch month. Meanwhile, mobile PUBG clones Knives Out and Rules of Survival both have had successful launches.” 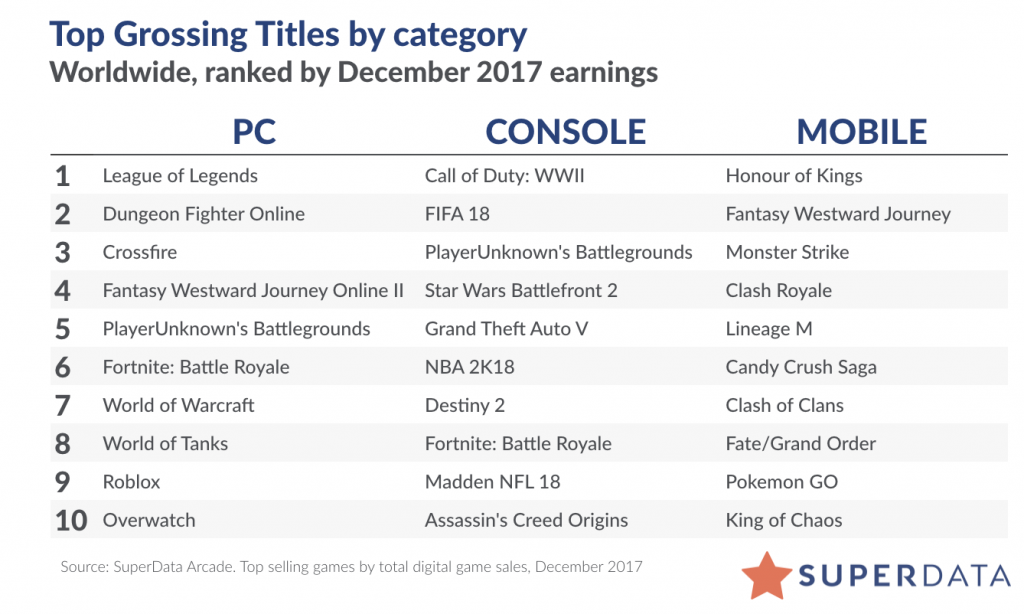