END_OF_DOCUMENT_TOKEN_TO_BE_REPLACED
If you were ever of the opinion that one thing the voxel world Trove needed was a superhero, then you are getting your wish! The upcoming Vanguardian class is very much your classic superhero — or villain! But what is a hero without a city to protect and foes to protect it from? The Heroes expansion offers all of that and more. I got to hang out with Senior Producer James Karras and animator Ted Sanger as they flew through the neon world of Luminopolis on a new Vanguardian. This new superhero-themed class might just be the very class to finally pull me away from my Dracolyte (which is ironic, since this update is also when the Dracolyte finally gets some buffed-up love!).

As it turns out, this expansion is also more about a story. And you know me — I love story! That makes me even more excited to get into this expansion for myself. If you are also looking forward playing this class, touring the new city, or just collecting the many new allies, you’ll be able to join me when Heroes launches on March 27th. Until then, we’ll all have to settle for living it vicariously. 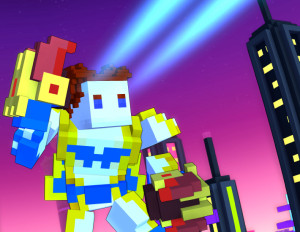 I’ll admit that none of the classes in Trove has really grabbed my attention with the exception of the Dracolyte. That is changing with the addition of the Vanguardian. I’m a fan of superheros and comics, so how can I not love this caped crusader? He’s kind of got it all: the classic flight pose, big in-your-face punches, ranged fire bolts shooting from his hands, laser eye beams, super speed buffs, and the ever-important super hero costumes (complete with cape). And we can’t leave out his passive, Touchdown. With this, the Vanguard blows a big hole in the ground whenever he lands after gliding. Karras shared that he had fun building tunnels using this skill and added that players can bust into the top of dungeons this way. (Players may be excited to learn that this passive is the sub-class ability, meaning you can get that super jump and powerful landing on any other character.) Oh, and did I mention he can dance and shoot? Yeah, I will totally dance fight!

While I like the look of the silver hero costume, the classic version steals my heart because the attack effects include the old classic fighting sound bubbles like “pow” and “biff.”  The red and black, skull-adorned villain costume also has a cool effect with the dark orbs. The new Wind Tunnel wings also let the Vanguardian — and any other class — fly with just the wind trail effect instead of any wings.

Does this sound like a class you want to play? You can purchase it outright or gather the ingredients in game and craft it – just be warned, crafting is not going to be easy!

Do you remember Neon City? Maybe only vaguely, or maybe only in passing as you question, “What in tarnation is neon about this grey zone?” Well, Neon City is going neon! Revamped in many sections as the bright and vibrant Luminopolis, this subbiome finally lives up to the original name. I loved seeing the sights in this city; it really had an old comic book feel to it for me with all the skyscraper-esque buildings and vibrant colors. It doesn’t hurt that I love neon colors and luminescence, and this is chock-full of both now.

Luminopolis has more than just good looks going for it. The devs explained that the goal was for all levels of players to have content in this zone. New players who are Uber Level 3 will have tons to experience as they enter this area for the first time, but high level characters also have reason to visit, like boss rampages. Why would higher levels want to come to Luminopolis? For the Rampages! This new challenge is a mega boss that will kick off every hour for 20 minutes. A large system message will appear on screen and a number of mega world bosses will appear to attack Luminopolis. Players then need to come together to destroy the threat. You want as many as you can get there because these bosses function like the piñatas, meaning that each hit will only deal one damage. Once you down this foe, each player gets a sentient shard, the new main crafting ingredient for this expansion. Fun fact: Of the three mega world bosses in the Rampage, the one with the sword will actually slash pieces out of the buildings if she gets too close!

Trove may not be one of those games that you equate with story, but the devs are sneaking a little bit in with this expansion. It won’t be in the form of NPC monologues or quests; rather, it is in the environment itself. Karras said that Luminopolis “is part of an effort on [Trion’s] part to do more visual storytelling within Trove.”

“Trove has historically been a mashup of a lot of really fun cool stuff, but there wasn’t as much cohesion as we’d like. So what you’ll see in Heroes and some of the expansions going forward is we’re really looking to bring that story forward a little bit more in visual ways.”

Whats the story in Luminopolis? The Amperium faction (the one responsible for all the drab grey) is attacking the city. You’ll see this in the landscape as pockets of the old Neon City color scheme. Also, the tanks might give it away! The Resistors faction is fighting back, working to save the city. The Resistors, of course, welcome having a hero to come help protect them, and that is where the Vanguardian comes in.

There is lots more that is going into the expansion, and since we spent so much time zooming around the city, Karras and Sanger just touched on some of it. Expect two themed dragons, 15 allies, seven mounts, outposts, beacons, more costumes (including new level 30 costumes for every class), tomes, themed frameworks, and a new craftable potion.

The devs showed off the two dragons during my demo. Rhom-10, Dissent’s Roar, is the dragon affiliated with the Amperium faction. It keeps the grey, circuitry look. The second dragon, Hoshizora, Luminary of Hope, represents the Resistors and looks like a dragonfly in the Vanguardian’s blue, yellow, and white color scheme. One interesting new fact about these dragons is that not only do they fly, they also work as magriders. They also showed off a number of the new allies (minipets), which are all craftable. With a count standing at 15, this is the most allies that have ever been introduced in one patch.

We talked about outposts, the randomly spawned non-combat structures that will have a Kami, an NPC that gives out adventures, as well as Resistor workbenches. These adventures are the best way to get XP in the zone according to Karras.

Craftable beacons are items players will use to summon the Rampage bosses into their club world! Everyone who participates in this fight will also earn a sentient shard upon defeat, but whomever tossed out the beacon will also get another one.

Even with all that, that’s not all that is coming wiht the heroes expansion. There are other quality of life improvements, such as the small er patch size, themed days, and the new welcome screen that Karras and Sanger also briefly showed off. You’ll be able to experience it all in less than two weeks!

still have 3 character tokens from the early days, when they threw them out like candy. I will def. come back to the game with the xpac. its always fun.

The bummer is that tokens won’t work to unlock this class – it’s got people on the forums/Reddit pretty mad. :/

Aww really? I have a token I haven’t been able to use because I had all the classes. Bummer.

Same here! I bet there are going to be a lot of unhappy/surprised people logging in for this patch, and that’s when the real uproar will begin. I get that Trion needs to make some dough on this, but still, why give out tokens we can’t use?

I had a stack of them I just turned into experience potions. :/

At least you don’t have to buy it! I will craft mine if I can’t token it =D

The MOP Up: Who’s showing up to E3 this year?