END_OF_DOCUMENT_TOKEN_TO_BE_REPLACED
Many MMO gamers – including me – are a bit underwhelmed by the next chapter of the Elder Scrolls Online. Although Summerset is not a bad bit of content, I have concerns about the amount of content that is coming with this expansion compared to the last expansion, Morrowind. The island of Summerset is a nice size, probably bigger than Vvardenfell, but there seem to be fewer things to keep people interested for longer than maybe a couple of weeks.

That being said, what it does, it does very well.

I’ve already mentioned in a previous article how gorgeous the island is, especially the extra zone of Artaeum. I was blown away by that. But I didn’t go into depth about Psijic Order skill line. At the time I wrote that article, I really hadn’t had a chance to play around with it. But now I have, and although I can’t say that everything about that skill tree is perfect, there are more than a couple of skills that I will be considering for my live character when the expansion launches.

I’ve broken up the Psijic skill line into three categories: utilities, healing, and passives. Keep reading and I will break it down further. And I would like to caveat before I get into the details, that if I give specific numbers, that those might change before launch, and that my character was Champion Level 750 Sorcerer without any CP spent.

Morrowind gave us a whole new class that turned out to be a jack-of-all-trades. It could heal, tank, and DPS. Thankfully, the Psijic skill line from Summerset does not try to do the same thing. However, it does augment the existing abilities of practically any class using three vastly different utilities that revolve around time.

The first ability in the skill line is probably my favorite and one that I will likely add to my live character right away. Time Stop targets the ground and stops time for all the enemies in an eight-meter radius. There is a two-second channel for this ability, which can make things a little difficult to time, but once you get it down, it becomes a very effective group stun, locking the affected targets for three seconds when the channel finishes.

The Borrowed Time morph for Time Stop stops healing to the affected targets for the duration of the stun — probably a great PvP addition. And the Time Freeze morph gets rid of the channel, but only slows the target over four seconds before finally stunning for the three seconds. This is the morph that I used because I tend to focus on PvE, but to be perfectly honest, I didn’t find that it enhanced the overall effectiveness of the ability.

My least favorite new ability is Imbue Weapon. First off, it’s a stamina ability in a majicka-focused skill tree, and secondly, it’s an active buff to augment your next attack. I’m not a big fan of abilities that operate this way. It’s an extra button for me to hit before I can actually attack. Its morphs are not that exciting either. Elemental Weapon switches it to Majicka (which is good) and adds a random elemental effect (which is all right). Crushing Weapon keeps it a stamina ability but heals you for 25% of the damage done.

Accelerate is a fun little ability, but another that I don’t see myself using. It “bend[s] time and space around you to gain Major Expedition for 3 seconds and Minor Force for 12 seconds” according to its description. It’s fun, but when I have these kinds of abilities in other games, I tend to not use them in a fight but to run away from things. And the morphs aren’t enough to entice me either: Channeled Acceleration adds more time to the buff but adds a channel, and Race Against Time increases reduces the cost of Sprint.

I’m on the fence about whetehr I’m going to actually put the Psijic ultimate Undo on my ability bar, but it is really cool. Essentially, it turns you into Tracer from Overwatch. When your ultimate is full, you can jump back in time to four seconds before you cast the ability. Your position, health, majicka, and stamina are all reset when you hit the ultimate button. The morphs aren’t bad either. One allows you to cast it while you’re crowd controlled, and the other acts as a passive damage reducer when it’s slotted on your bar. 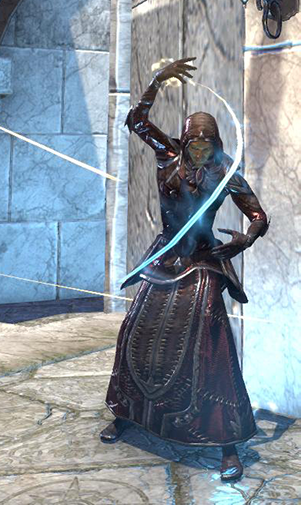 Both of the healing active abilities are interesting because they are a toggle. You activate them and they remain active until you turn them off. I can’t think of another ability like it in ESO. Correct me in the comments below if I’m wrong.

Mend Wounds simply converts your light and heavy attacks into healing abilities for your party. This makes a lot of sense for Sorcerors, but what I’d love to see — just because it’d be funny — is an archer shooting healing arrows at the party or a brawler swinging his two-handed mace to smack you upside the head with healing. The Mend Spirit morph increases allies physical and spell resistance when they are healed by you, and the Symbiosis morph heals you while you heal others.

Meditate seems to work like an out-of-combat heal that you might find in other MMORPGs, but it works while in combat. You are rooted while your character heals. I’m not a healer usually, so I have a hard time seeing the usefulness of this ability because the morphs don’t even affect the group. Deep Thoughts increase your personal Magicka and Stamina restoration, and Introspection increases the amount of healing done by 10% with each tick. 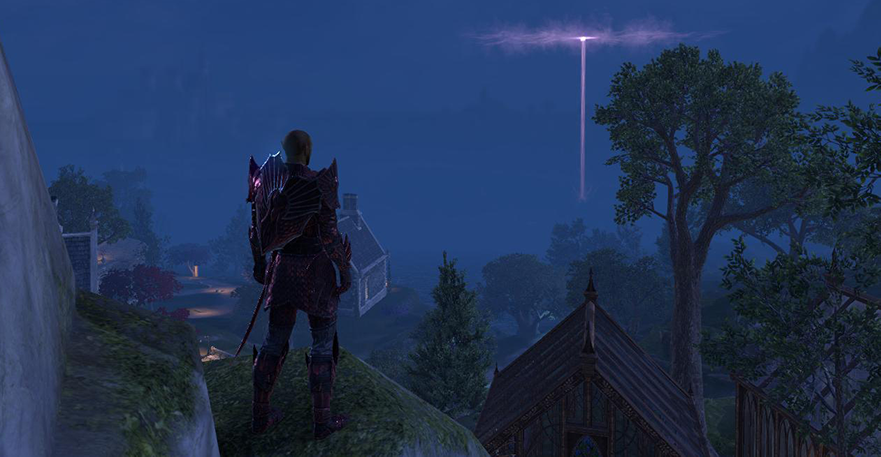 The passives, for the most part, are more utilities, save for See The Unseen. This ability allows you to see what are essentially lootboxes scattered around Tamriel. Clairvoyance and Deliberation affect your stats: the first reducing the cost of Psijic abilities, and the second reducing the damage taken.

The last two passives are still augments but add an extra boost during combat. Spell Orb generates a spell charge when you use a Psijic ability in combat that turns into damage to a target after five charges. And Concentrated Barrier is an extra damage-absorbing passive when you block and have a Psijic ability slotted.

I do like all the passives, but as I mentioned, I’ll use one of the active abilities and maybe another if I want to replace my ultimate. What are your thoughts? I think the healing abilities could be interesting, and Undo could be fun, but will you use any of them when Summerset goes live? Let me know in the comments.

Bookmarked, want to read this.

I can see returning for this Expack err Chapter sry. i did for morrowind prolly will for this.

Man, I so wish I could get over the mouse/view/movement style of this mmorpg so I could play it more. My wife and I both just have a hard time with such controls, added bonus that they often cause me nausea. Same issues with SWL and DDO as well, man do I strongly dislike the mouse controls on those mmorpgs as well. :/

Pretty much stuck just reading about ESO and once in a while logging in and attempting to bear with the controls for a bit before logging off in frustration. Regardless interesting read on the new psijic stuff.

Oh yes that’s right i remember about you and the better half’s problem. That totally blows, me i absolutely love that style of control. Shroud of the Avatar you can switch control style, if that kinda game is of any interest to you two. Bottom line, to be blocked from an entire game sucks.

Yeah I try not to mention it much anymore, figured everyone was getting tired of reading about it! lol. So much about ESO checks my boxes too, which makes this more painful to have to sit out.

I’m hoping to download and check out SotA next week btw. I wanted to get the new system all settled in, updates, and current software I use all installed, checked out and troubleshooted etc before adding a new mmorpg.

I think it’s cursor lock, so the motion which is the problem, and not really the controls themselves.

Yup, some how it’s the controls with the motion on the mouse. :/ Makes me very motion sick basically and for upwards of an hour where I just have to go lay down and close my eyes. It’s the same reason I can’t play First Person Shooters anymore either.

Makes sense, and stinks at the same time. Have you found an MMO yet where this is not an issue?

I can build up a resistance to ones with mouse/view controls like WoW, Lord of the Rings Online, Guild Wars I & 2 etc. If I don’t play for a week or two I find myself ill again and have to spend the next week or so spending an hour or so a day in the game until I build up the resistance again.

The problem is for games like Dungeon and Dragons Online, ESO, First Person Shooters and now SWL, I never build up a resistance to it. Don’t even get me started on how pissed off my wife and I are with Funcom over the change of controls from TSW to SWL. Totally made that mmo unplayable for us. :/

SotA is so much better on a powerful box. It’s a steep learning curve, but well worth it. oh and yea feel free to rant away, i do about nothing most of the time so…

Maybe try a controller? Perhaps that could help with the controls

As to the subject of the toggle abilities, I can only think of one other that may fit the bill, and that is the Warden’s summon Guardian Ultimate. Unlike other pet summons that is a kind of toggle. It might not be the same in this sense though. Hopefully I’ll find some use of the new abilities offered in the expansion.

Undo looks like it is heading straight to exploitsville! I imagine you could have a lot of fun with this in PvP melee. Charge in (using the 2H charge ability or the Nightblade teleport strike or another one), thrash around for a second, then ultimate back. You could make this even trickier by using terrain to your advantage.

There used to be a toggle-heal strike for Nightblade (Leeching Strikes), but they made it into a castable with a time limit. Major nerf.

I thought about that, too. But I think that it being an ultimate will curb some of the exploits.