This is Grinding Gear Games.

Grinding Gear Games recently acknowledged that some Path of Exile players were unhappy about a few topics and accepted responsibility, apologized for not addressing them adequately, offered an explanation as to why that happened, provided a plan to better address issues in a Q&A, and concluded with a commitment to finding “a good balance between addressing immediate concerns and making the long-term improvements the game needs.”

END_OF_DOCUMENT_TOKEN_TO_BE_REPLACED
There is one little law of human nature out there that it seems so many different developers and studios cannot grasp: You earn respect by showing respect. How many times have we seen a company’s image crash and burn by how the players and community are treated? Way the heck too many. So many that doing otherwise feels like a rarity. And once you get that stain, it is almost impossible to get out. Granted, with how mobs of players can act sometimes I can see why developers wouldn’t want to be forthcoming and open, but that can’t be the excuse to not be respectful. You really need to commit to showing integrity and respect, and those dividends will be repaid. Be honest with players, show them respect, admit mistakes and accept responsibility, and those players will be more supportive and offer much more understanding.

That is exactly why I respect and appreciate Grinding Gear Games; I admire how the company chooses to conduct itself, which it demonstrated again this week. On May 1st, the studio posted a detailed mea culpa, taking responsibility for Synthesis League issues as well as a lack of adequate communication lately. You might think, sure, we’ve heard apologies before, but this wasn’t a lip-service or deflection. The studio took responsibility for the problems! Man, I can’t tell you how many times I have dismissed an “apology” as disingenuous because a company shifts blames or seems sorry only that it got caught.

Producer Chris Wilson’s update went even further than that. More than just saying sorry, it also laid out a plan to address the current issues with the community in more detail and pledged to do a better job in the future. Accepting responsibility and actually proposing a plan to start fixing? Be still my heart. This is the type of company I want to support — one that values me and values integrity. And I am far from the only one. 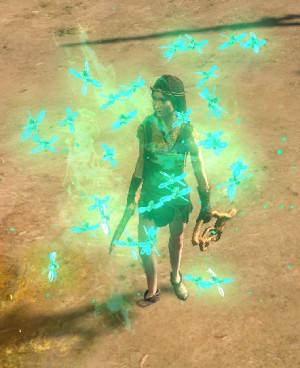 With Synthesis League, there appeared to be more critics than with the latest leagues. I have to admit, I don’t read all the negativity on any forums and tend to avoid them in general  because of that. So I missed most of the hullabaloo about the league (which I actually enjoy). But the key is that the devs have not missed anything. As Wilson’s post explained, devs just didn’t prioritize certain issues.

In order to be open with players, this mea culpa also included a more in-depth explanation of the thought processes and actions that led to this spot. Wilson detailed where development attention is going besides just the patching Synthesis League troubles, citing specific projects and explaining why they are are critical for the long-term success and future of Path of Exile. With priority on these critical projects, things like completely overhauling Synthesis or creating an entirely new type of one-month race were bumped lower. That project list includes:

This transparency not only gives players an inside look at the how and why things got to where they did but shows respect for the community and customers. And that’s a sentiment shared by many players. I read through many of the responses to Wilson’s post to gauge community reaction, and I was actually surprised and impressed by the response. Although I only read a little over half of the 48 pages of responses to this post, the player response was overwhelmingly positive. I read page after page of kudos for the transparency, appreciation that GGG was taking care of its developers and not subjecting them to “the crunch” craziness, and gratitude for the humility. Some even expressed the opinion that their faith was restored in the company after this communication.

To give an idea of the scope, in the first 10 pages there were only two negative responses of folks blasting the company or still airing grievances. Random pages reflected the same; by and large folks were very supportive and appreciative. Even folks who were criticizing the league were praising the studio. In that one post, GGG took unhappy players and brought them to their side by being open and honest with them.

It still boggles me that so many companies seem to forget that communicating with customers is important. It was apparently the absence of communication about issues that sent some of the POE community into a frenzy; issues were not just not being addressed, they appeared to be ignored. Lack of communication is never good, and a drop in communication is even worse. But as shown by the responses, the act of communication and the genuineness of the post, players were more than just placated, they were pleased.

I wish more companies would adopt the communication model. As the poster Uragiri put it, “The level of communication that you continuously provide is leagues (pun intended) beyond any other game developer that I’ve interacted with before.”

So here’s Grinding Gear Games’ plan. One thing Wilson noted was that the Synthesis league will not be merged into the Core League when it ends. He said,

“We fully acknowledge that it is not our best league and is not up to the quality standards that Path of Exile players should expect from us. It will not be merged into the core game in 3.7.0. Maybe we can do something with it in the future, but we have no current plans.”

Wilson also emphasized that the community usually does a great job offering constructive criticisms when expressing what they want changed, and the team very much appreciates it. The studio wants that to continue. He explained that the knowledge gleaned is taken and dealt with in one of two ways: Either a team is assembled right away to solve it (thereby taking all those necessary team members off all their other projects), or it is deemed lower-priority and put on the back burner to be dealt with at a later time (but not forgotten!).

Just because something isn’t addressed immediately doesn’t mean it won’t be. Wilson stated, “Simply put, we can’t fix every problem every league. There are going to be problems that we don’t address quickly. We’ll get to them as soon as we can.” But he did emphasize that GGG will do better at communicating with players going forward. And that earns my support.

Now, if only we could get more companies following this model.