When I first started playing Warframe, I definitely wasn’t in it for the story. Was there story? Initially, no. There were only crumbs of lore scattered through out missions and quests. You have some recurring faces, such as the brief directives of Lotus (more affectionately known to the community as Space Mom), who keeps telling you where to go, and the amusing snippets from Ordis, your snarky ship’s computer. Many bosses you face also offer a little tête-à-tête — usually with much boasting and threats. But story? No. That didn’t come until later. And still doesn’t come until later in the game.

END_OF_DOCUMENT_TOKEN_TO_BE_REPLACED
When you start Warframe, you barely have an inkling about any overarching story as you jump from mission to mission to mission. Like most, I was playing for the parkour and the killing sprees and then ultimately the fashion frame. Then one day I stopped just running missions randomly. I finally set out to work through the planets and actually pay attention to the quests in my codex. I knew there was some story because I’ve been attending TennoCon since its inception, and I was determined to experience it. While there were some story bits in other quests, the real stuff started with some teases in Natah. And then it exploded in The Second Dream. Even knowing a portion of what to expect, I found the the whole shebang was still a surprise. What was even more unexpected was how good the story was. It is the story of Space Mom and you.

Warning: Everything from here on out is spoilers, so if you have not completed Natah and The Second Dream, read at your own risk! Seriously, it’s all spoilers. Don’t say I didn’t warn you. Spoilers ahead. Did I mention spoilers? OK, if you insist…

I almost feel guilty by how surprised I was at the quality of the story in Warframe. I feel as if that is insulting the game. True, it isn’t Pulitzer prize-winning material, but the story’s cinematics pack a punch, drawing you in and your emotions out. And to be fair, story is not what brought people into the game because didn’t even have one for a long, long time. People played for the parkour and the powerful warframes wiping everything out. And there is no shame in that: Warframe does that very, very well. You can spend months and months just running the missions, improving your frames, gaining mastery on multiple weapons, and finding and building more of all of the above. I know this because that’s what I did. And I still had a blast.

Then along comes the story, and WHAM! You now have more meaning behind what you do — or more precisely, of you. You learn details about your past, you figure out how and why the warframes work, and you meet Space Mom. It was a game-changer for me. I am much more invested in it now; more than just running missions, I want to watch the story develop, to learn more of the past and watch the future unfold. Not only that, the nature of the game itself and how its played has altered. See what I mean about a powerful punch? Players still talk about it with a respectful awe to this day.

I have to give solid props to the Warframe community: It is the best at avoiding sharing spoilers. The players really go out of their way to not tell you what’s happening so you can experience it yourself and get the full effect. I’ve been covering this game for years, and attending TennoCon for the last three, and I was still surprised. Even devs who spoke with me about many topics would tread lightly on particular story specifics since I hadn’t played through it yet myself.

I am so glad I finally did!

As much as I was affected when the story played out and the big plot twist was revealed, I can only imagine the impact on the game’s community that about-face had when it came out. Because until that moment, the game was just running and gunning through the missions. “Story” was just a snippet of lore scattered here and there. Suddenly, years into the game, you get the curtain pulled back and it shows nothing that you’d have expected back then. Heavens, it wasn’t even what I expected now. 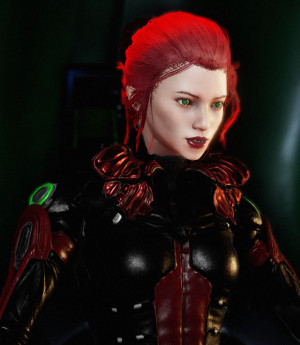 Because of the nature of my job, some things were “spoiled” for me by necessity. I knew there was an operator that was separate from the warframe. (You get a hint all along as Ordis refers to you as the operator, as if not realizing you don’t even know!) However, with only that knowledge, I had to envision what that looked like myself. I was picturing more some little creature that moved between the frames, like some sort of symbiotic creature such as a Trill from Star Trek or the brain of a machine. Boy, did I have that wrong! And the real answer is far cooler. You watch your own birth into wakefulness in this reality: You’re a being hunted as a child because of her abilities, powering the frames remotely with her mind from her dreams… that’s just so awesome. And that bit where you get to play as the operator — even cooler. Not only was the power neat (though part of the mission is frustrating), but the poignancy of the frame rescuing you was powerful, from carrying you to safety to the resurgence against Stalker at that crucial moment. It was emotional.

And let’s not overlook Stalker. Even knowing the story would play out regardless, watching his internal struggle impacted me; I was rooting for him to turn against the voice of Hunhow and break free from his control and manipulation. It pained me when he ran my Frost Prime through. And even though I hoped it, I cheered when good ol’ Frosty ripped that sword out of his chest and stood once more. Oh, the feels.

Speaking of the feels, where does Space Mom fit into this story? Why, she is the story. Although parts of the tale told previously had you possibly questioning the Lotus’ motives (and I anticipate more thanks to the slight spoilers I’ve had to absorb), you discover she’s the one who rescued and hid you all this time. The real you, not the warframe you. Because obviously, lots of folks have seen the warframes as you plow through missions and decimate the various evil forces. And she hid you from her own kind, from everyone in her life — including her father. She lost everything by making this sacrifice, and she did not regret it one bit.

I won’t lie, it was really touching when Lotus lifted me up and carried me to the life-saving pod. I never expected to see her in the flesh, let alone be saved by her. Again.

The story goes on

While The Second Dream is understandably billed as the Big One in the story, it is most definitely not the end. The tale of Tenno continues, next with The War Within. I’ll be streaming my playthrough on OPTV, starting Friday the 21st at 8:00 p.m. EDT, so you can watch my reactions to the story’s development live. I cannot wait to see what the future holds and how this knowledge will affect everything. I cannot wait to play as a true Tenno.

Even after completing that mission, there is more to come. Digital Extremes is continuing Warframe’s story, and I wouldn’t put it past the team to throw in more plot twists. The devs may never be able to top The Second Dream, but I know they are up for trying. After all, they’ve consistently outdone themselves each year of TennoCon. I’ve no doubt that  Tennocon 2019 in two weeks will have some surprises for us, and I am looking forward to it!