Digital Extremes can sure pack a bunch of good stuff in its Warframe Twitch shows, and July 26th’s devstream #129 was no exception. But one particular little clip caught my attention, and then my breath: Live Operations and Community Producer Rebecca Ford started playing an instrument in game! Say what?! If there is one thing that I champion at every turn, it’s player music systems in games. And here is Ford, plunking away at various strings and frets on a guitar-like shawzin. I can’t even express how giddy this small snippet of stream has made me.

END_OF_DOCUMENT_TOKEN_TO_BE_REPLACED
Honestly, I did a double take — but neither my eyes nor my ears were deceiving me. While it was a tease, it was a tease of things to come; it wasn’t some dev sorcery of impossible dreams but rather actual content currently in development that will become available in game soon. Soon my friends. (But not soon enough!) Soon we’ll be there will be a playable instrument in Warframe, and impromptu jam sessions will start springing up across the universe. I cannot wait! And I hope this is only the beginning of more player instruments and more music to come.

The story of the shawzin

There’s a story behind this Warframe-specific stringed instrument. Don’t worry, I am not going to spoil the actual story. I couldn’t even if I wanted to because I don’t know it yet! But the fact that it has a story, or at least a prominent place in the story, is so cool. I love that it fits in the Warframe universe. In case you want to delve into it yourself, I know that the shawzin presents itself in The Sacrifice story mission, and I remember seeing it in the background of a trailer. I know I am even more eager to play through The Sacrifice as soon as I can now.

Warning: I am a little sad I was spoiled a tiny bit when I went in to get myself a shawzin. Now I’ve got the basics of the origin and even know of a ballad composed for it, though how it all fits in The Sacrifice I don’t know yet. I’ll let you in on what little I learned, if you want.

Click to reveal brief shawzin description spoiler!
This antique Orokin string instrument once belonged to a great Dax. The ancient ballad called Smiles from Juran is one of the few known examples of music composed for this instrument.

Does the idea of having a shawzin excite you, too? You don’t have to wait for the musical feature to be added to game before owning your very own. While you can’t play it yet, there is a decorative version that allows players to place one (or more) in your personal orbiter or clan dojo. Acquiring one is easy: You can buy one in the market in-game for 40 platinum. Or you can join us for the OPTV stream at 8 p.m. EDT on Friday, August 9th, and try to win one!

If you buy some and haven’t gotten to the story in game yet and didn’t spoil yourself with the information above, just remember my warning above: Try not to read the description — it does have spoilers.

Right now, the shawzin is still in the middle of development, so you’ll have to wait to play. During the stream, the devs stressed that the notes are not final, and hand animations are still being created. None of those facts diminished the excitement of watching someone play it live, but I can’t wait to play it myself! The question is, how will it work?

Plans are that owners of the physical shawzin decoration will be granted an emote that will allow them to play. Notes will be played with the number keys (currently 1, 2, and 3), and players can change between three frets by using the left mouse button, the center mouse wheel, and the right mouse button.

Want to play with friends? You can! So far players will be able to jam together in squads, but it is currently not set to work in relays. That latter might change, which would allow larger musical performances like in Lord of the Rings Online, which would be absolutely awesome! I really hope that  becomes possible (but definitely include the option to turn it off for others!). 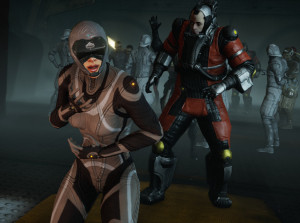 Please be just the beginning

You can’t tell how excited I am for this, can you? But as much as I am eagerly anticipating the shawzin, I am even more excited for the prospect of a more fully fledged music system. Now I am not saying that Warframe should get up to the level of LOTRO, but wouldn’t it be great to have the ability to play multiple instruments? And what about playing preset ABC files you make and upload (instead of the live clicking)? And what about playing those multiple instruments with uploaded ABC files together in a synced fashion with others? Heck yeah! That would be AMAZING! Everyone could get in on the dance parties.

So what other instruments would fit in the Warframe universe? Of course a guitar is fitting to the feel of the game and community as well as works well in its lore. I am pretty sure drums would easily work. The most fitting in my mind would be a woodwind instrument, specifically a flute of sorts. Just imagine the haunting melodies you could make with it. What about a sax? A harp is a personal favorite of mine, and while I can see it working into the ancient lore, would it be fitting for the community? About that, I am not sure. Personally, the Scottish in me would even go for bagpipes. Just no cowbell, please.

I have hope for an expanded musical instrument system because there is already a working system in place for Octavia, the music-weilding ‘Frame. Players can create and upload songs to play while her ultimate the Mandachord is going. I delved into this world when I came across a Baby shark version.

Someone gave me a copy of Baby Shark to use on my Mandachord in #Warframe I'm very pleased with the results. pic.twitter.com/kwynyxuo49

But that’s not the only one — not by a long shot. There are so many more players have been doing. One poster on the official forums, Reborn, has a huge songlist of created Mandachord tunes available for folks to listen to. Reborn even takes requests! DEfinitely worth checking out.

And we don’t even have to wait for this feature to start an in-game band. There already is  a full Octavia band you can listen to! Not kidding. And it is amazing! You absolutely have to check out the DNexus channel on YouTube. I can’t embed all of them, so go give them a listen. Here’s an original composition to get you started:

Honestly, I hope this music feature is well-received so we can get even more instruments and more abilities. I am beyond stoked for what is coming, and even more for the possibilities that may come later. I am already planning jam sessions and dance parties in my mind. And I am totally bent on getting Octavia now as fast as I can.

Actually what Mandachord music was missing (and it’s quite clear in Warframe Octavia Band’s videos) is a good melodic component – you can do some melody with Mandachord but as it’s basically a sequencer with just one pattern its melodic capabilites are quite limited. Adding shawzin would allow for much more expressive tunes.

A couple of updates on the WIP shawzin just got posted to Twitter, scale switching and a whammy bar:

Still WIP but here's a vid with what is one of the coolest features to go into #Warframe in some time (imo😂) And the spacebar is… also a whammy bar!! If you pay attention there is another thing that is pretty cool about this (coming soon).Thanks to @WhatNowErich @PabloPoon pic.twitter.com/iDCKfGpK6I

The shawzin’s involvement in The Sacrifice quest is mostly just background flavour, so not too big a spoiler.

I’m so impressed by the way the band on DNexus’ channel not only synchronises the Octavias but also works in sound effects from other ‘frames and their powers on some songs, like Rhino’s roar and Valkyr’s scream and (as seen above) pet MOA chirps. Oxium City is one of my favourites, ’cause I like a good solid drumbeat – it’s also the track that brought them to my attention after being featured on one of the official streams .

While I’ve got Octavia I don’t think I’ve used her at all since levelling the ‘frame up for Mastery, and I stuck with the default tunes. But I do recommend that everybody tries her quest, Octavia’s Anthem (unlocked after finishing The Second Dream), as it contains some great lore about the Cephalons and also some very musical missions. The last mission in particular is a unique and memorable experience!

I really hope they add the ability to compose, save, and upload songs. Warframe has had drums for a while, but it’s almost impossible to do anything with them because there’s almost no way to match timing (and each type of drum only sounds one note.) Something like Lord of the Rings Online would be amazing, where people can upload a midi file. But even if it was just something like a version of Octavia’s Mandachord that could hold more than four bars of music, it would be a start.

Without that, everyone trying to play music together is at the mercy of their own reflexes, ping, and musical skill. As much as I’d love to see people being creative, trying to freehand music like that seems to mostly end up sounding like someone shoved a rock band down a flight of stairs. :( Here’s hoping they put in the time to make it an actual creative tool, and not just a musical toy.